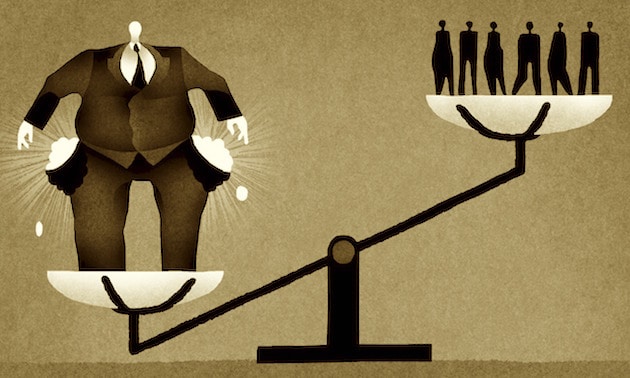 In the past, I’ve warned about the coming Great Wealth Transfer.  But now we need to talk about it in the present tense, because it’s here.

And it will only accelerate from here on out. The Rich will get richer at the expense of everybody else.

This isn’t personal. It’s simply a feature of what happens near the end of a debt-based monetary system run by corruptible humans.

They and other central bankers have become the standard bearers of a system that can best be described as a reverse Robin Hood scheme, one that takes from the poor and gives to the rich. It’s just that in this tale, the ‘poor’ means everybody not in the top 1%.

So you need to understand this wealth transfer process — how it works, who’s perpetrating it, and what dangers to watch for. If not, you’ll be a victim of it. And you’ll probably live in confusion and shock by how hard just ‘getting by’ becomes going forward.

Realizing that you’re being specifically targeted by a system determined to separate you from your wealth is the essential first step towards figuring out how to evade the predators and protect yourself.

What do we mean by a Wealth Transfer?

It isn’t just some academic concept. It’s a playbook that’s been used many times in the past by governments to forcibly extract wealth from the public and use it for the benefit of those in power.

The first part of this Wealth Transfer process is called Financial Repression. It’s an extremely effective — and nefarious — financial engineering scheme, which we’ve discussed here at PeakProsperity.com many times over the years — notably here, here, here and here.

Financial Repression is enacted when governments take on too much debt (which they often do!) and find themselves with few politically acceptable ways of escaping that situation. So, in ways both overt and covert, they conspire to use the public’s savings to dig the government out of its debt hole.

The formula for Financial Repression

This is theft, plain and simple — engineered theft of the highest order. It takes from the many, without their consent. It’s not openly debated, put up to a vote, or even openly admitted to. It’s deliberately done behind the public’s back.

This is what Janet Yellen and her merry band of thieves at the FOMC are carefully administering. Seniors who can’t afford to live on their savings? Young adults who can’t afford to buy a home? The central bankers ignore them, as well as the social pain and economic misery their policies are inflicting on hundreds of millions of people.

But make no mistake, the loss of income that the Financial Repression inflicted by these sociopaths has harmed the elderly, pensioners, savers, and the young. Plus inflated the biggest asset bubble in history, which will make 2008 look like a picnic when it bursts. All to prolong the government’s out-of-control spending addiction a little bit longer, and to put even dollars into the pockets of the banks and the wealthy Elite.

Delaying The Inevitable (A Slow But Steady Decline)

So Financial Repression is Act I of the Great Wealth Transfer. It’s happening now, and it will likely persist for a lot longer. Sadly, it will continue for as long as the banks, the Fed, and the politicians can get away with it — until the economy collapses under all the debt and/or the impoverished public breaks out the torches and pitchforks.

The middle class will experience this as a steady erosion of their financially security. It’s a drip, drip, drip style of torture. Every year, your income and savings will buy less. The value of your money will be in terminal decline.

Those who don’t understand Financial Repression are probably still confused by Trump’s victory.  But if you realize that the vast majority of the people of the United States (and Europe and Japan) have been tossed under an economic bus to help serve the narrow interests of a tiny financial elite, and are barely hanging on to a middle class lifestyle as a result, electing an anti-establishment firebrand candidate suddenly makes a lot more sense. It explains the similar rejection of incumbents we’re now seeing across Europe.

Virtually everybody in the bottom 95% is being economically and financially sacrificed to bail out the prior bad decision of the central banks and their associated governments. And as that’s deeply unfair, it breeds resentment. Psychology tells us that resentment breeds contempt. And once there, relationships are doomed to fail. Our leaders have broken their covenant with the governed, and the governed are increasingly pissed. Expect that simmering anger to boil over at some point.

But, as mentioned, Financial Repression is just Act I. Act II is a lot more ugly.

Financial Repression is a way to delay the day of reckoning. That day will still arrive, and be all the more destructive for the pent-up forces that have built up during the delay.

How The Death of Paper Currency Will Redefine Wealth

At the heart of the matter here is that too many debts, too many claims, have been created. There’s a finite amount of “real stuff” in the world (productive companies, farmland, mineral ores, timberland, buildings, railways, waterways, etc). But with each new issue of debt, the claims on that real stuff multiply.

So what’s at risk here is an inflection point where the world realizes it’s holding a lot of paper, but little of substance. At that moment, the value of nearly every financial asset — stocks, bonds, mortgages, derivatives — even and especially our own currency — will be sharply, painfully reduced.

In Part 2: Winning The Great Wealth Transfer, we detail what that re-adjustment process will look like and where the carnage will be most extreme. More importantly, we explain that even though the paper losses will be staggering, the number of “real things” — those factories, acres and commodities — won’t have changed at all. Merely their ownership will have changed. And that will make all the difference in determining winners and losers.