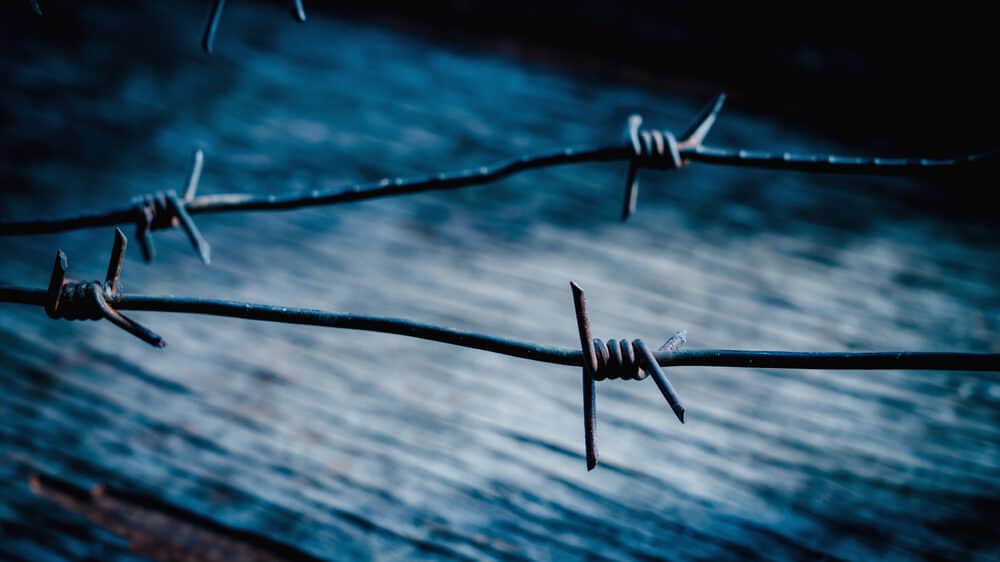 Be Careful Out There; Technocracy in a Nutshell

Be Careful Out There; Technocracy in a Nutshell

Payrolls came in reasonably strong on Friday; the headline number was +315,000, with the labor force growing by 786,000, a fairly brisk increase, marking a new high for the labor force. That means a lot more people started actually looking for work. (Series: Federal Reserve Economic Data (FRED) – CLF16OV, civilian labor force 16 years and over). During that same time period, disability fell by 303,000. Perhaps some of the workforce previously disabled by  “COVID” have started to recover. Let’s hope they avoid getting reinfected by “COVID” when the new bi-valent “COVID” is released this month by Pfizer, having tested this “COVID” on eight mice to ensure it is both Safe and Effective. (Source – Igor Chudov) 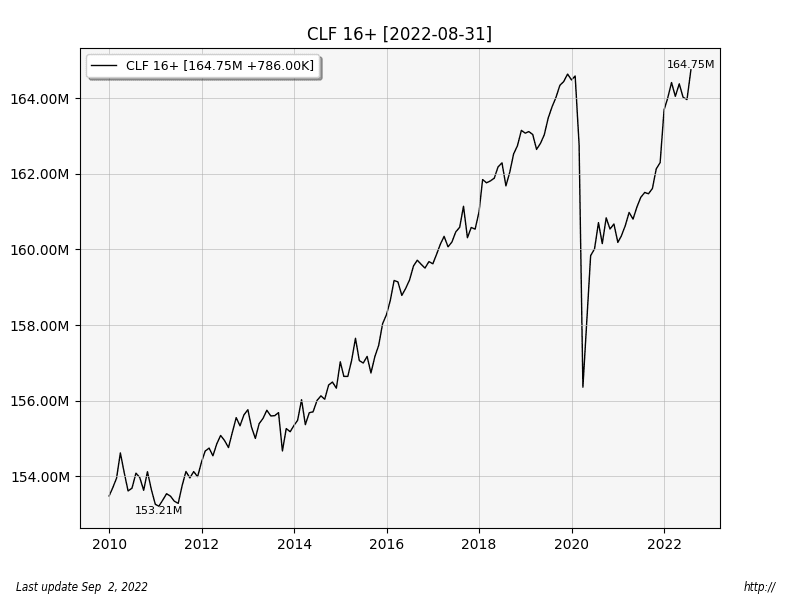 The pop in payrolls on Friday at 08:30 caused a 4-hour rally in equities, but the rally didn’t last; equities sold off through end of day, ending the week down by 3.29%. That wasn’t a great look. The weekly sector map for equities looked bearish, with tech (-5.29%) and materials (-5.14%) leading the market lower, while utilities (-1.49%) did best. Utilities performing best, tech doing worst = bearish. Standard and Poor’s 500 (SPX) also closed below the 9 MA, which is a short term bearish signal. 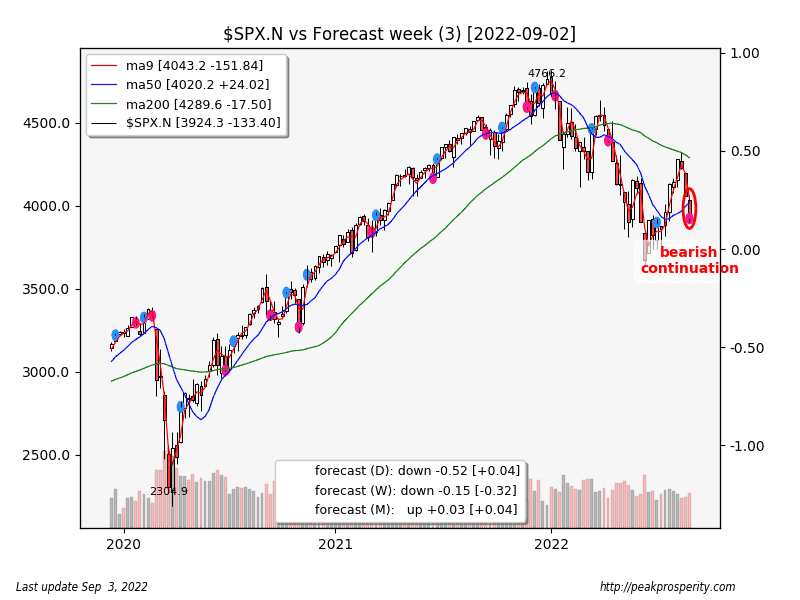 Crappy debt (JNK) also plunged, losing 2.14% – you can see that the JNK chart is uglier than that of SPX (although it has a shorter timeframe), and it is quite close to breaking down below the previous low. JNK is also signaling risk off. 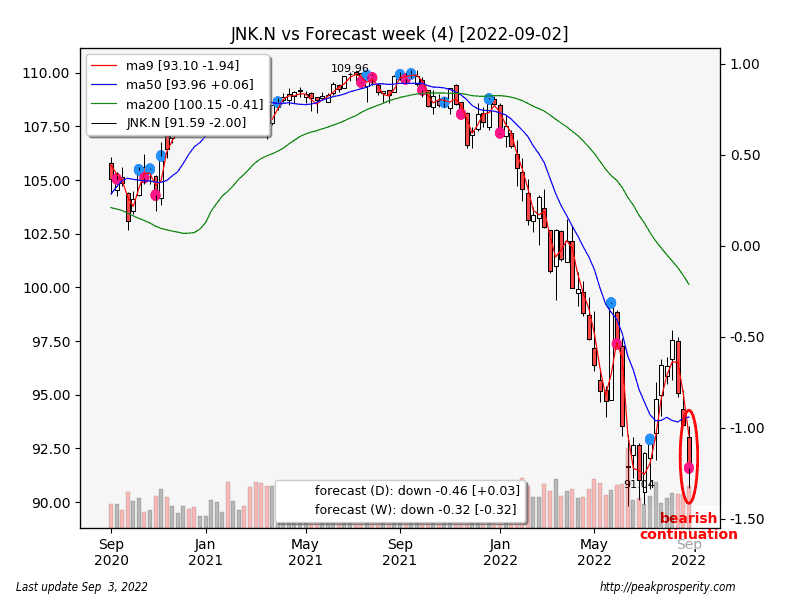 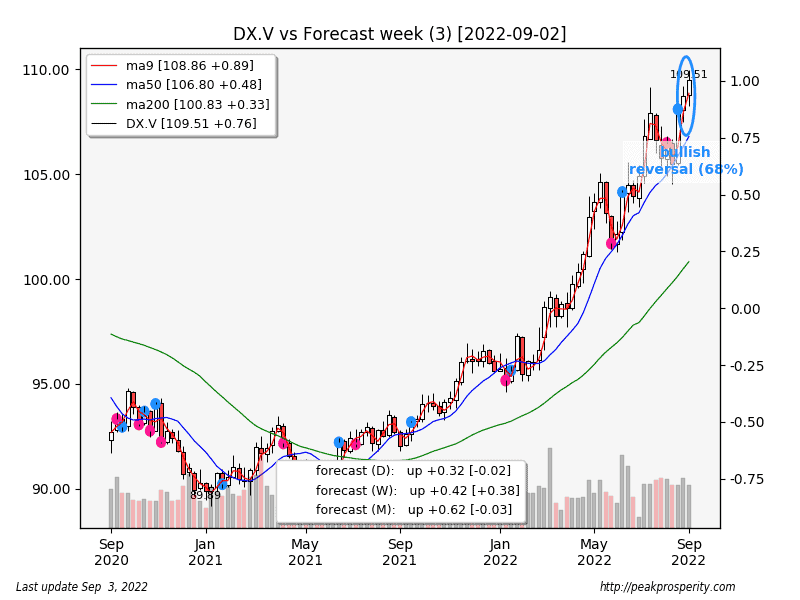 Gold fell 27.20 [-1.55%] on the week, some of which was the strong dollar effect. Gold/Euros fell too, but only by 1.19%. You can see that OI (open interest) remains quite low, which hints at a low for gold – but with all the fuss in Europe, currency moves appear to be dominating the price of gold at the moment. Possibility: if/when the DX ever corrects, gold might have quite a nice rally. Of course that probably requires peace in Ukraine, which the WEF currently appears completely uninterested in discussing. 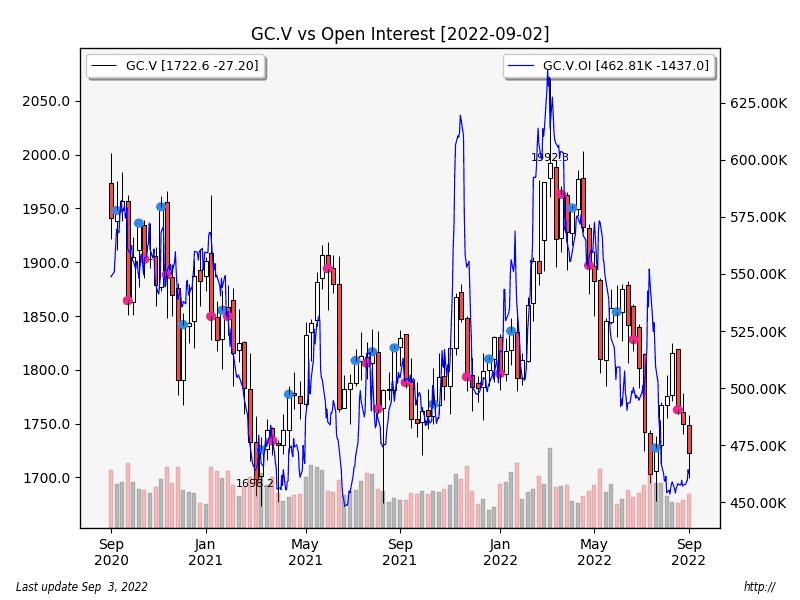 The Biden-Handler pillaging of the Strategic Petroleum Reserve slowed this week; it has fallen to “just” three million barrels per week, which gives the SPR (which has been around since 1982) an expected lifespan of 2.8 more years.  End of Empire stuff here. But the Biden-Handlers aren’t working for You and Me, they’re working for Oligarchy and the WEF. 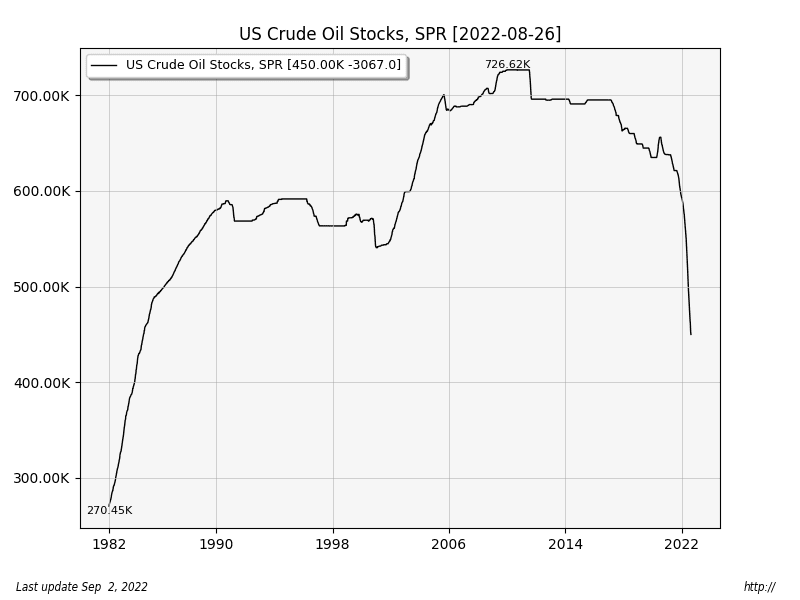 Crude was hit fairly hard this week, dropping 6.19 [-6.65%] to 86.87. Crude is down about $35 from its recent high – it appears as though SPR-looting has been a reasonably good strategy for the Biden-Handlers. After threatening to rebound last week, crude is now back in a downtrend. 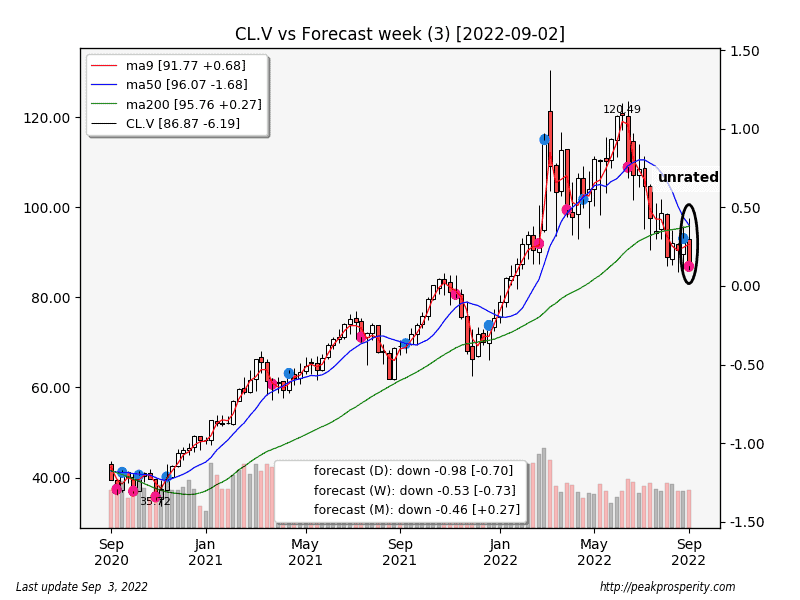 September has arrived. The buck is strong, risk assets look bearish and weak. This month is often a “bad month” for equities, especially during a downturn.

As they used to say: “let’s be careful out there.”

Broadcast Networks Declined to Carry Biden’s Speech Because It Was ‘Political’ and Criticized Trump: Report (Source – Mediaite). Only CNN and MSNBC carried the speech live.

More Than 50 Biden Officials in 12 Federal Agencies Colluded with Big Tech to Censor Their Political Opponents (Source – trendingpolitics). The details in this article, discovered by the Attorneys General lawsuit discovery phase, make it a must-read. If you are looking for evidence of actual fascism (an alliance between the State and Corporate, in this case to suppress free speech), you will find it here.

Biden Taps John Podesta To Oversee Historic ($370 billion) Climate Spending Push (Source – Yahoo). Podesta emerges from the crypt. How much “Pizza” can you buy with $370 billion in taxpayer dollars?

Finally, the classic image from the Biden-Handler attempt on Thursday to install visual Nazi-ism in America, complete with Hitler-esque fist-shaking and blood-red lighting. The number of memes this inspired (my favorite: #PedoHitler) online was…impressive.  Mockery is the best defense against fear. 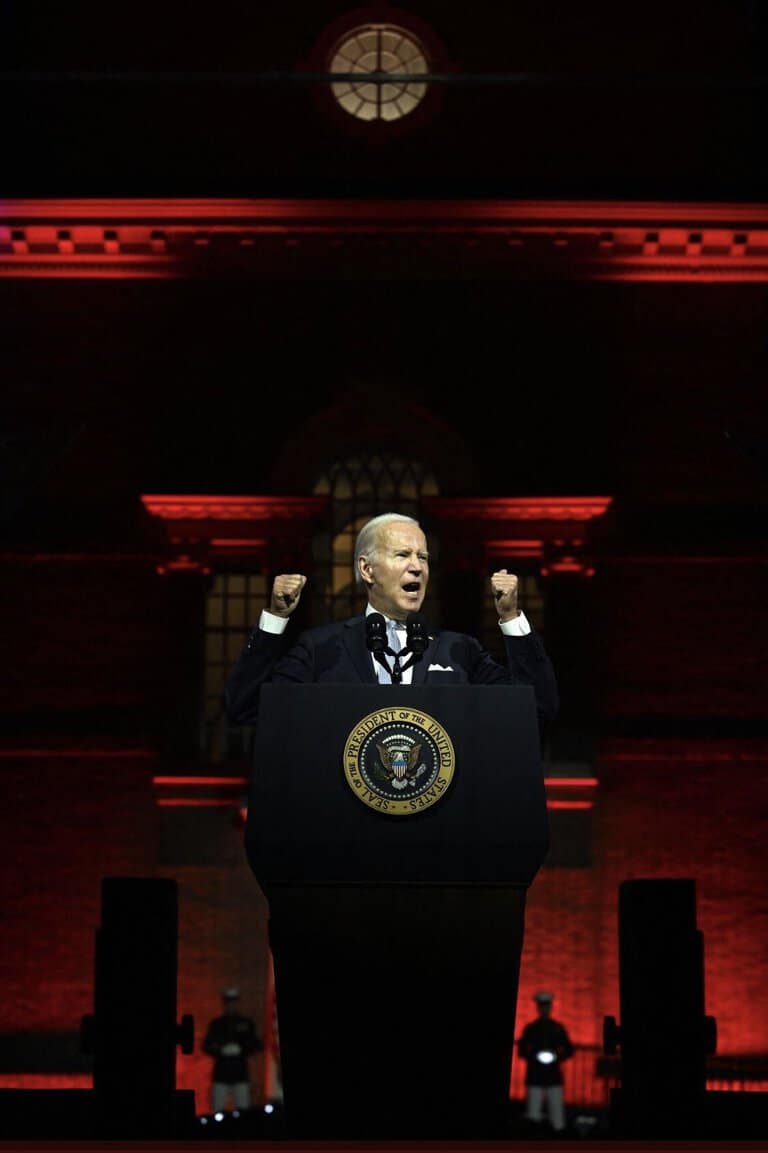 Ukraine (articles from RT – “The Other Side of the Hill”):

Ukraine planned to use IAEA team as ‘human shields’ – Russia (Source – RT). “The Russian military has provided new details on the botched Ukrainian raid on the Zaporozhye nuclear plant”

Germany made ‘fantastic admission’ –Lavrov; (Source – RT). “The Russian FM’s comment came after his German counterpart said Berlin would back Kiev no matter what its own people think”

“Europe On The Brink:” 70,000 Czech Protesters Flood Prague Over Energy Crisis (Source – ZeroHedge). This is just the start. How long will the WEF and their Young Global Leaders hold out? That’s the question.

If Covid-19 Public Health Emergency Ends, Millions Of Americans Could Lose Healthcare Coverage (Source – Forbes). Does anyone really imagine the Biden-Handlers will ever end the “pandemic emergency”?  Did  #RealHitler end his “Reichstag Fire Decree?”  (Source)

Biden administration is preparing for the end of free COVID-19 vaccines as funds run dry (Source – CBS). Free “vaccines” are ending, along with Fauci’s time at NIAID.

Vaccines are taking an average of 5 months to kill people (Source – Steve Kirsh). Perhaps thats why the Biden-Handlers aren’t going to pay for more shots?

NACI now suggests Canadians consider a COVID-19 booster every 90 days (Source – Toronto Sun). Can you name another shot which requires a booster every three months? The “NACI” has just acknowledged just how poorly the shots work. Anyone even remotely aware will figure this out.

One wonders what numbers 2022 will bring. All of it – “brought to you by Pfizer” who also ensured there were “No Treatments For You!”

Chinese metropolis of Chengdu locks down 21 million residents (Source – CNN). “On Monday, a Chengdu resident with the handle “Tropical Forest” on WeChat, China’s popular messaging app, said in a group chat that authorities would discuss whether to impose a lockdown in an evening meeting….On Tuesday, Chengdu police said the WeChat user, surnamed She, had caused panic among citizens and disrupted epidemic prevention work by posting “provocative comments”. She was detained for 15 days and fined 1,000 yuan for “picking quarrels and provoking trouble.” … On Thursday, Chengdu imposed a sweeping city-wide lockdown…confining 21 million residents to their homes as the country doubles down on its zero-Covid policy ahead of a key Communist Party meeting.”

China is the model for where the WEF and the Biden-Handlers want to take the West.  In China, a conspiracy theory is released by a citizen on Monday, the citizen is arrested on Tuesday, and the “conspiracy theory” becomes actual policy on Thursday.  If we are to believe CNN, this actually happened this week in 21-million-person Chengdu.  It is a much faster version of Anthony Fauci’s 2.5-year pandemic performance; masks, lockdowns, (and soon to be) vaccines, all of which didn’t work, then they were required for several years, and now it turns out they don’t work so well after all, and for lockdowns and masks, he never said they worked, and nobody got hurt anyway!  And in the future, you will be arrested for predicting it!  This is Technocracy in a Nutshell.  Trust the experts!  Science!

The “vaccines” – along with the pandemic – appear to be ending. Lead indicator: “news.google.com” has shown no stories about COVID19 for the last week or so. Not COVID19, not Omicron, not articles pushing the new bi-valent (8-mice) boosters, really nothing. I had to go search by hand to find them. How can you have a pandemic without free tests, free (mandated) vaccines, a constant media blitz, bribes paid to all and sundry to push the shots, organized weekly Federal speech suppression of dissent, and hospitals paid extra by the government if their patients die, just to increase the fear? The pandemic money is almost gone. No-money-no-honey, as they say. Contrast with 2021; there is no big media 24/7 push right now to flog the bi-valent 8-mice boosters for the fall.  My sense: the whole nightmare breaks down once the funding stops. Just imagine: what happens to COVID patients in hospitals when the hospital administrators are no longer being bribed to kill them? Will the administrators actually allow patients to receive treatment? Imagine that – patients getting treatment. The answer to this whole mess may just be: “defund the pandemic.”

Regarding Ukraine, I still can’t see a better explanation for the “energy problems” in the West, other than a deliberate plan by the WEF to harm (de-wealthify) the European middle class through energy deprivation, with the mechanism being “Ukraine.”  This is allegedly to address “Climate Change” – but really it is yet another Oligarchy wealth and power transfer. Message to the UK middle class: here’s a 420,000 pound electric bill; subtext is “No Pubs For You!” Maybe: Coors is set to open a chain of pubs in the UK in 2023, and it needs the retail spaces and the competition cleared out ahead of time.

Will the Biden-Handler #PedoNazi ploy work out for them? What is their goal? While on the surface it appears to be about inspiring “the base” and possibly about motivating the Antifa Brownshirts, I suspect it is primarily about convincing a few rubes in MAGA to get themselves “recruited” by a passel of corrupt FBI informants for some pre-election false flag op, where the corrupt FBI informants supply the bombs, the guns, the ammo, the money, the plans, the sex, the booze, and 24/7 encouragement. Gretchen Whitmer meets January 6th in October, 2022. Will it work?

We will just have to see. The Biden-Handlers desperately want to avoid this election if at all possible. Who wants to lose power? Not them. Will #PedoHitler reading his teleprompter, and shaking his fists on a red-lit stage help to bring about an FBI-engineered “Reichstag Fire” false flag, resulting in an Emergency Decree? All I can say is – stay tuned. We are living through history. Maybe even an attempted-repeat of history.

Be careful out there.