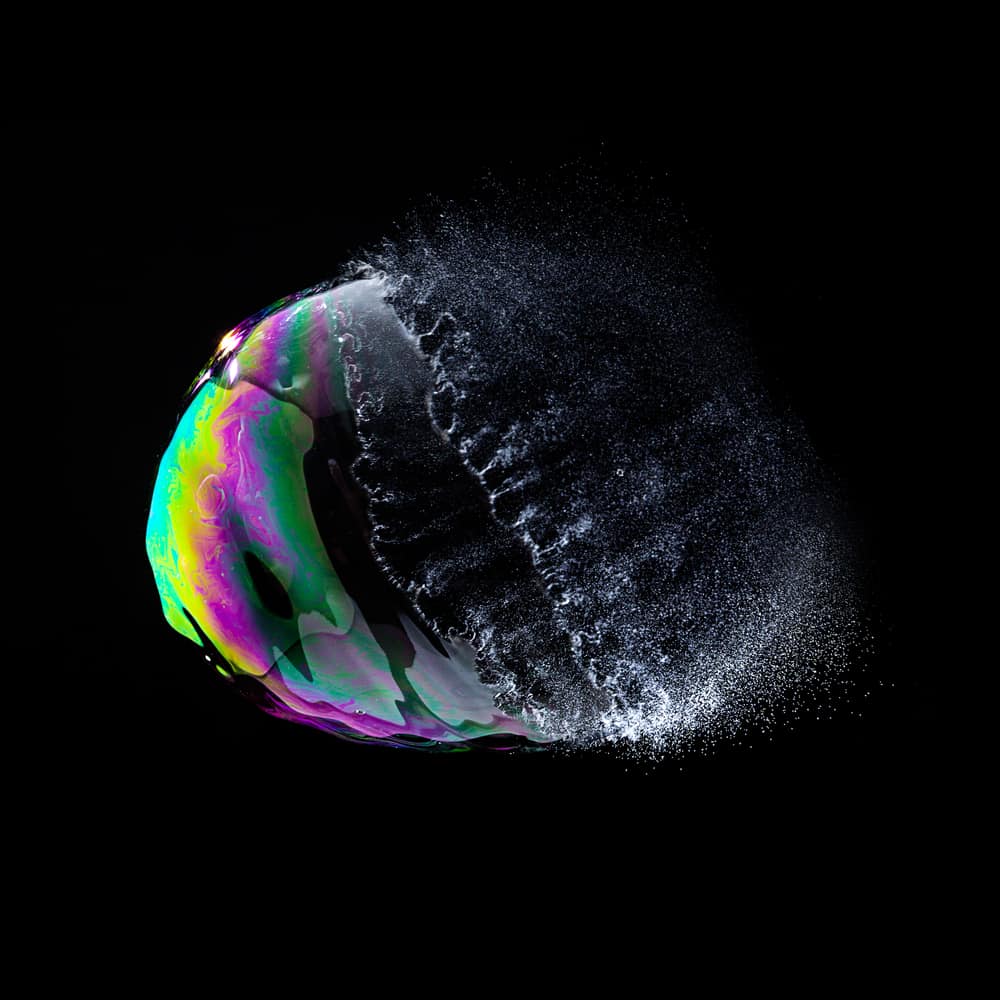 Why The Markets Are Overdue For A Gigantic Bust

Why The Markets Are Overdue For A Gigantic Bust

Let me begin with a caveat: confirmation bias is an ever-present risk for an analyst such as myself.

If you're not familiar with the term, 'confirmation bias' suggests that once we've invested time and emotional energy into developing a worldview, we'll then seek information to confirm that view.

After writing about the economy for so many years, I'm now so convinced that we can't print our way to prosperity that I find myself seeing signs confirming this view everywhere, every single day. So that’s the danger to be aware of when listening to me.  I'm going to keep repeating this mantra and Im going to keep finding data that supports this view.

Based on lots of historical inputs, I have concluded that Printing money out of thin air can engineer lots of things, including asset price bubbles and the redistribution of wealth from the masses to the elites.  But it cannot print up real prosperity.

As much as I try, I simply cannot jump on the bandwagon that says that printing up money out of thin air has any long-term utility for an economy. It's just too clear to me that doing so presents plenty of dangers, due to what we might call 'economic gravity': What goes up, must also come down.

Which brings us to this chart: 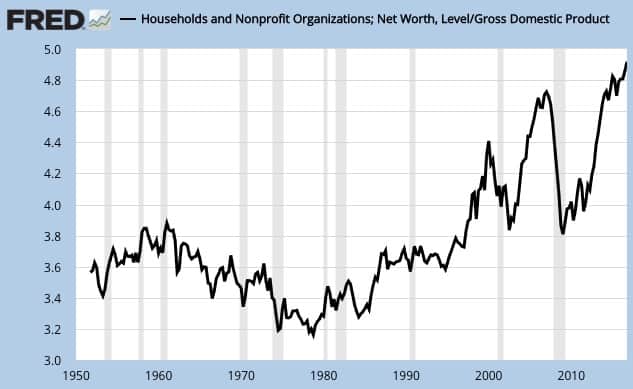 The 200 bubble blown by Greenspan was bad, the next one by Bernanke was horrible, but this one by Yellen may well prove fatal.  At least to entire financial markets, large institutions, and a few sovereigns.

It's essential to note that more than two-thirds of the net worth tracked in the above chart is now comprised of ‘financial assets.’  That is, paper claims on real things.

As the central banks have printed with abandon over the past decade, they’ve created the most extreme gap between real things (GDP) and the claims on those same things (Net Worth) in all of history.

Following the Great Recession, the ‘plan’ of the central banks, such as it was, seems to have been to jam up people’s paper wealth, under the theory that people who feel wealthier are more likely to spend more and hopefully borrow more, too.

That plan has worked rather well, at least from the standpoint of creating vastly larger amounts of new borrowing (debt and credit).  But  how much GDP growth has resulted? Not that much.

The gap between the two only grows and grows at this point. And the central banks are now stuck at this point. They literally have no idea how to undo this problem they've managed to create.

At some point that gap is going to have to close. Either GDP growth recovers to its highest rate in all of history and then stays there for many years (a complete fantasy if we're being honest), or the global debt pile starts getting defaulted on (which will have very ugly repercussions).

This is why we’ve focused so heavily lately on central banks. It's why we recently produced the End Of Money webinar with an excellent panel of experts (including G. Edward Griffin, David Stockman and Axel Merk) to increase our understanding of what actions the increasingly desperate central banks are likeliest to try next.

As the above chart chillingly shows, the damage down by the bursting of each previous market bubble blown by the Fed has been worse than the ones that preceded it. This time will not be the exception. This third bubble, the largest and most ill-considered of them all — which we've written extensively one as The Mother Of All Financial Bubbles — will be enormously destructive.

It will be so bad, that here at Peak Prosperity.com, we not only focus on helping people navigate the tricky world of building and preserving their financial capital at a dangerous time like this, but we also advise building true resilience across the other important forms of capital such as Social, Material, Living, Emotional, Knowledge, Time and Cultural capital. So much will likely be lost in this next reset that true wealth in its aftermath will be dependent on more than just money.

Most people take their cues from the price level of the stock market.  Once upon a time, equities were a useful barometer. But that was before the central banks began intervening heavily in them, starting under Alan Greenspan. He was responsible for the first big bubble on the earlier chart above.

If you listen to the words in the public statement of the central banks, you'll hear a lot about ‘improving conditions’ and ‘nearly full employment’ and ‘strengthening growth prospects’. However, if you then look at their actions, you'll see they're in complete opposition to these statements.

As always, you should put far more weight on what someone does rather than on what they say.  Actions speak louder than words, and so here’s all you need to know about the central banks, their influence on markets, and what they really think about things at the moment: 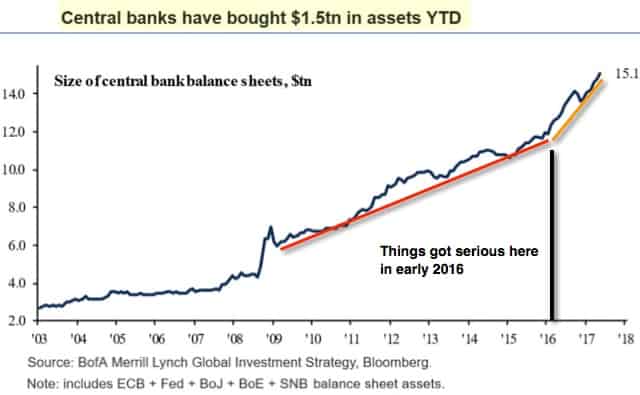 First, we have the red line trundling up at about a 30-degree angle from left to right for several years.  But then, in early 2016, the trajectory changed.

Do you remember what was happening then?  Emerging markets were in disarray, many had entered bear market declines, and the dollar was shooting higher ruining the economies of many developing nations. The western stock markets started rolling over and appeared ready to suffer a serious decline.

"Not on our watch!" declared the central banks. See what happened at the same time, as indicated by the orange line rising at a much steeper 45-degree slope?

That’s right: the central banks began dumping far more money in the equity and bond markets, in an attempt to save everything from the inevitable downturn that threatened to result from the prior central bank printing spree.

Now, here in early June of 2017, the Big 5 central banks have poured a whopping $1.5 trillion dollars(!) of newly created, thin-air money into the markets since the beginning of the year.

And because they have, we see things like this, where all the hot speculative money flows to the very hottest stocks, in this case the "FANGs"(Facebook, Amazon, Netflix, and Google): 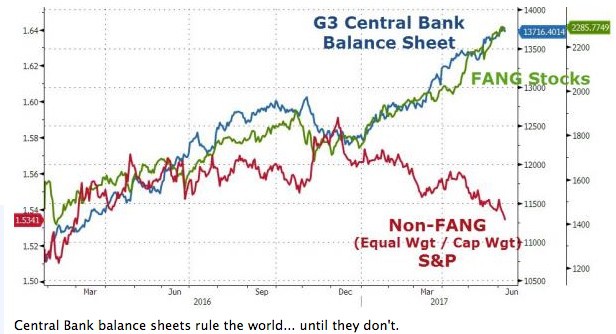 The above chart shows that while these hot, sexy stocks have been rising (remember, we were all genius investors in the 1990’s, too?), the non-FANG stocks have not.  Further, the chart reveals the extent to which such stock price action has been coincident with central bank money printing (balance sheet expansion).  The connection is completely obvious.

But back to our story. This $1.5 trillion is a record-breaking amount.  As in, never-been-tried-before-let’s-see-what-happens sort of amount.

So, while the words of the central bankers may be soothing, their actions are panicky.

What are they afraid of exactly?

Well, that their entire scheme will prove to be another gigantic bust.

The only thing that can bail them out at this point is a swift return to robust, sustained economic growth. So let’s take a look at growth again, shall we?

Growth Is The Answer (And The Problem)!

The global growth scene is a mixed bag.  Right now, China and Europe seem to be in better shape than the US or Japan.

However it’s important to remember where we are in the economic cycle. Nothing grows forever, and we are now very far into this so-called 'recovery'.

In the US, it ranks as the third-longest recovery since WWII: 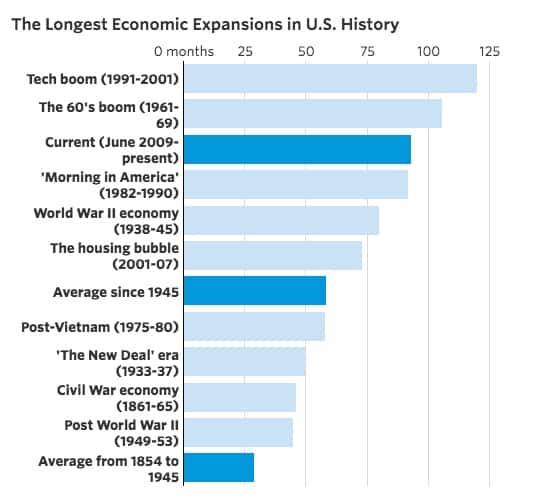 Apparently, not all ‘recoveries’ are built the same. If you look at the average yearly GDP growth rate over the past decade, it's the same as we experienced during the Great Depression era of the 1930’s: 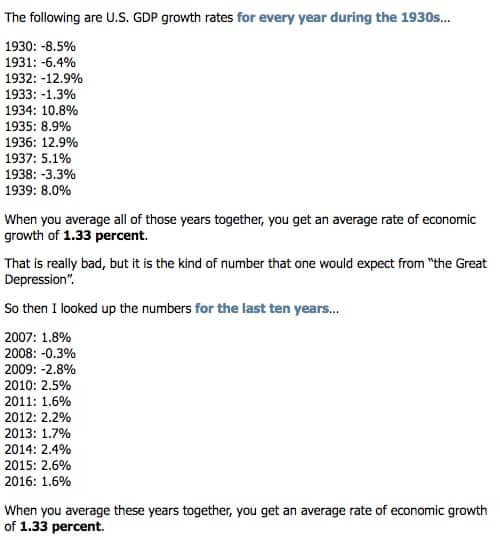 The above dismal rate of growth perfectly explains the growing gap between household net worth and GDP.  If you boost financial assets ever higher using central bank stimulus, but the economy remains stagnant, you get a gap.

Global economic growth is weak, has been weak, and will continue to be weak for many reasons. Not least of which is the massive overhanging piles of accumulated debt across the global economy, which are very growth unfriendly.

As Professor Steve Keen has shown, if your debt grows at 10%, and this enables your economy to grow at 5%, anything less than a more rapid rate of credit growth in the future will cause your economy to contract.

Said another way, as long as you can grow your debts at a faster pace than your income — forever — you'll never have to experience another economic downturn.

That statement right there, lays bare the entire ridiculousness of everything the central banks have, and are currently trying to engineer.

Eventually, reality always catches up.  And there are plenty of signs indicating that reality is now arriving.

And it doesn't look happy.

In Part 2: Get Ready For The Coming Massive Correction we explain why there's a better than 50% chance of a global recession occurring in the next year — and nearly a 75% chance of one in the US.

We then detail out how the coming predicted massive market correction may well rip the financial markets apart in a way that could take generations to repair in any meaningful sense.