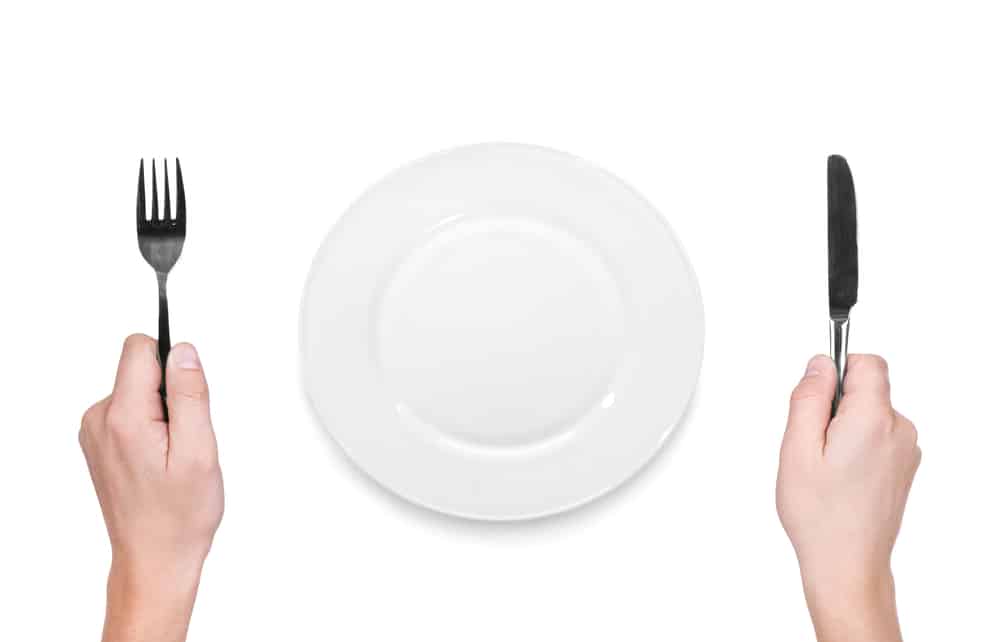 Many more people need to understand what that word really means, and how it applies to pretty much everything in the current human living arrangement. Especially the so-called 'developed' nations. 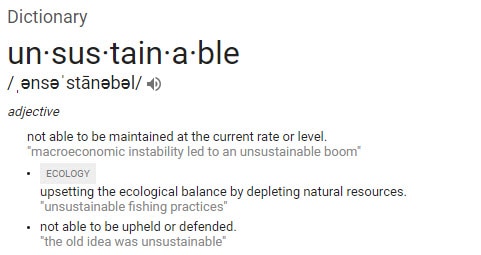 Let's take these three definitions one at a time.

First: our entire economic model, which dependent on borrowing at a faster rate than income (GDP) grows, is something that simply cannot be maintained at its current rate or level. Check.

Second: depleting species, soils and aquifers are all wildly unsustainable practices that are accelerating. Check.

Last (and most glaring of all): the world’s leadership (and we use that term very loosely) continues to insist on adhering to the indefensible idea that infinite growth on a finite planet is possible  Checkmate.

Said another way, the daily comforting stories we are told about how all of this somehow makes sense are just a load of nonsense. Each is entirely unsupportable by the evidence, facts and data.

What happens when a culture’s dominant narratives are not just unsatisfactory, but entirely unworkable?

Well, for one thing, the younger generations that are being asked (goaded?) to step into an increasingly flawed future begin to resist. Which is completely understandable. They have nothing to gain if the status quo continues.

At the same time, the older generations mostly just settle into a stubborn insistence that everything will be fine if everyone will just do more of precisely what got us into the mess in the first place. Younger people should step up to make sure Medicare/Social Security/pensions remain fully funded, and buy the financial assets and homes of downsizing seniors at top dollar. The boomers have everything to lose if the status quo changes.

Why do I bother to tell you all this?  Why have I spent the last ten years of my life trying to alert the public of risks they keep telling me make them uncomfortable?  Because I care. Because I hope to help a few people preserve their hard-earned wealth. Possibly even save a few lives with this information. And, ultimately, to help people lead lives filled with greater connection, aliveness and joy.

The key to all of these better outcomes is having a clear-eyed view of "what is", and then being able to predict "what’s next". Which means that understanding is the first step. Informed action follows from that.

In the US, through selfish over-consumption, the baby boomer generation has screwed the prospects for following generations. It's now doing everything to deny and defend its extraordinarily self-serving and short-sighted decisions, and delay the repercussions for as long as possible.

For the record, I seriously doubt the current younger generations would have behaved any differently were we to teleport them back in time  The boomers came of age when net energy from oil was still climbing and that ‘taught’ them about ‘how the world worked.’  When you have abundant resources, especially high net energy oil, you can pretty much do anything you want.

Not so much. A BIG fallacy of the past is that wars lead to rapid economic expansion afterwards. A more correct version of this is that the destruction of war leads to rapid recovery and rebuilding ONLY IF you also have access to abundant high net energy oil. If you don't, wars only lead to destroyed economies.

Think of it this way: an 18-year-old who injures his knee has the resources of youth to help them recover completely. But an 80-year-old? Not so much.

This fallacy of thinking that we can just have another nice major war (North Korea?), or a few major hurricanes (Harvey, Irma and counting…), and then not only recover, but return better than ever is a dangerous delusion to hold. It's no different than our 80-year-old thinking that taking up downhill skateboarding would be a safe and sensible thing to do.

Self-deception is a process of denying or rationalizing away the relevance, significance, or importance of opposing evidence and logical argument. Self-deception involves convincing oneself of a truth (or lack of truth) so that one does not reveal any self-knowledge of the deception.

The inter-generational resentment mentioned above is growing ever more extreme and it’s creating a significant social (and soon political) disturbance that will prove to be utterly disappointing for all. Already we see the signs in failing pensions having to cut benefits, young people opting out of such bulwarks of cultural stability as car ownership, marriage and having children.

If the DNC hadn’t straight up stolen the primary from Bernie Sanders, it’s quite possible that he’d have handily won the US presidential election and we’d already be feeling the effects of the political power of the next generation.

In this view, Trump is nothing more than the first (but not final) reflection of boomer denial backfiring badly. The sclerotic remnants of the past held fast and tried to jam Hillary down the throats of a very unenthusiastic electorate that long ago concluded that business-as-usual is literally a vision without a future. And so Hillary was rejected and Trump, the only alternative left standing, got the victory.

The US economic data to back up this decidedly dim view of things could not possibly be more robust and unassailable.

If we were allowed just one chart, just a single piece of data to back up this assertion, it would be this one: 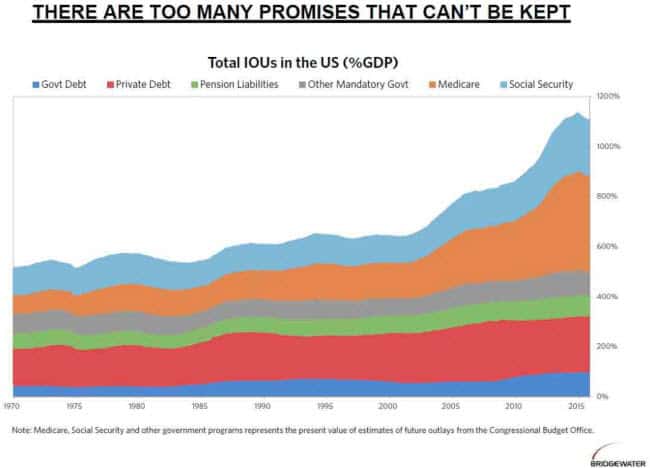 The oft-cited and worried over ‘US federal debt’ of some $20 trillion is the lowest dark-blue shaded area on that chart .It’s not even 10% of the predicament the country faces

No country has ever dug out from under a debt + liability load anywhere close to that amount. It's just too big a hole to climb out of.

With GDP growth stubbornly anemic for going on 12 years now, and no fresh sources of high net energy to fund future GDP growth, we can say this very simply about the promises our politicians are soothingly singing to us:

Any thought that these promises will be kept is delusional.

They won’t be kept because they can’t be kept. It’s really no more complicated than that.

Only one question matters when presented with a chart like this: Who’s going to eat the losses?

The keepers of the status quo, such as Hillary and Trump and their cozy relationships with Goldman-Sachs, et al., want the answer to be ‘the taxpayers’ (and not ‘the banks’). But they'd never publicly admit to that. So they pretend that losses will never matter, and instead promise perpetual prosperity for all.

So people, companies, communities and the entire nation of the United States makes plans and investments as if the above chart didn't even exist.

This is no different than our 80-year-old refusing to draft a will because he simply can't face the reality that one day he'll need one. Such denial and self-delusion make a terrible strategy to live by.

The fact that you live in a world where the leaders of most countries are engaging in willful denial does not mean you have to be a victim to the consequences of their irrational delusion.

This is why having a clear-eyed view of the data, knowing your history, and forecasting the most likely outcomes are critical for positioning yourself for safety.

Those who do this empirically realize that the global economy is far more likely to contract, possibly viciously, before it expands. Given this, today's global equity prices and non-investment grade bonds are absolutely mis-priced for such an outcome — instead they're practically priced for perfection, and thus due for a major correction.

Last week we issued a report warning of the multiplying number of important indicators signaling a coming market correction and economic recession.

Building on that data is next week's webinar featuring Grant Williams and Lance Roberts who will be presenting their latest indicators, analysis and forecasts at the Dangerous Markets webinar on September 13th — where they will take ample questions live from the audience. For more information on the webinar, click here.

In Part 2: How To Deal With Our Dangerous Markets And Failing Future, we explain why the fall from today's market highs will be so painful, and where today's concerned investor can look when seeking safe haven for their capital.

We have the world's central banking cartel for our situation, who have — for the third time in less than 20 years — blown a gigantic bubble.  Or rather, have blown a nested set of bubbles (stocks, bonds, housing), each of which will help accelerate the popping the others when the time comes.

As with a developing hurricane, the time to prepare yourself for these eventualities is well before they actual manifest.  Once they’ve arrived, your ability to respond and react will be hampered by the fact that your efforts will be accompanied by those of thousand and millions of other people. Don't be one of the panicked herd. Take prudent action today.