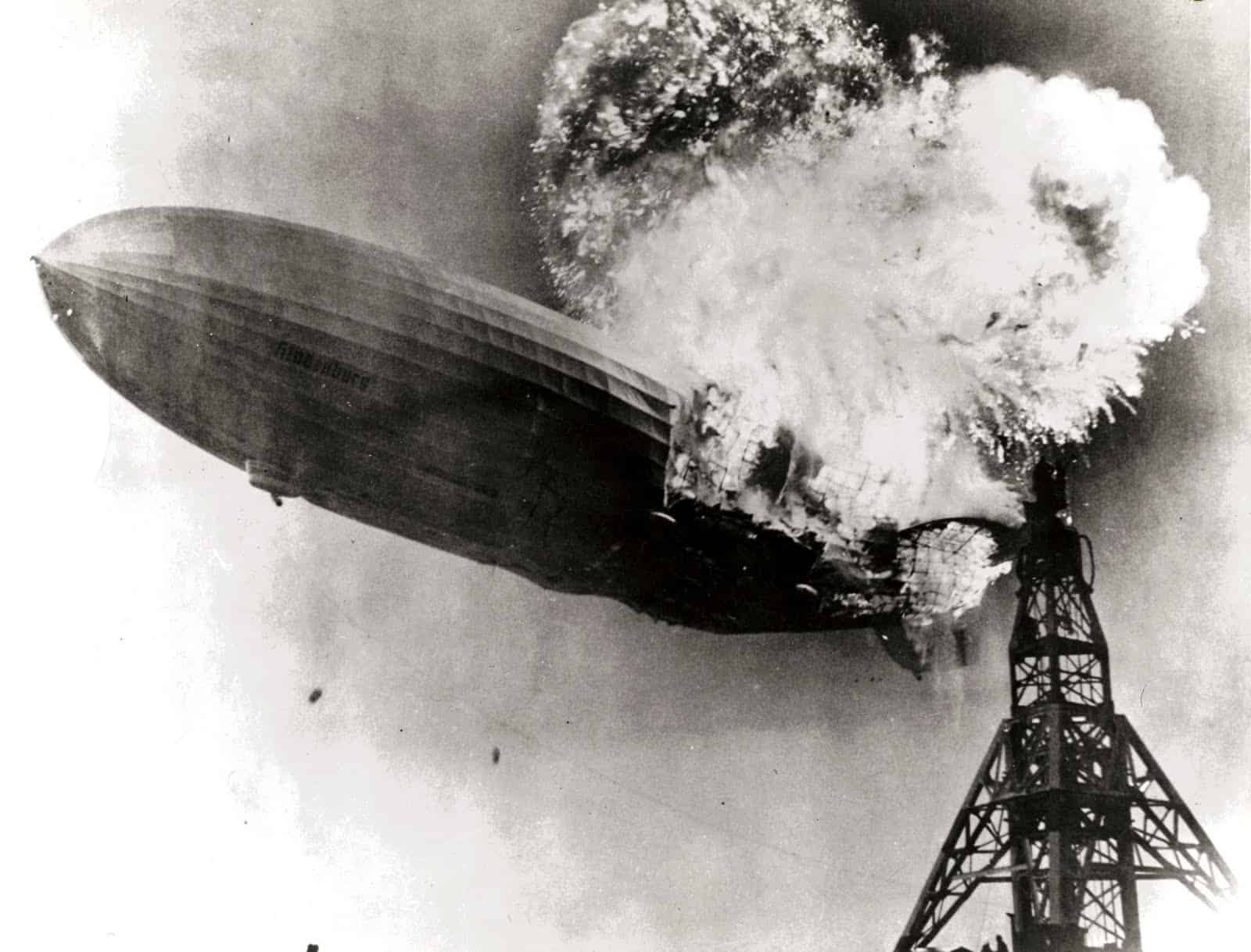 When This Ends, Everybody Gets Hurt

When This Ends, Everybody Gets Hurt

Central banks around the globe have taken us all into uncharted territory, where the possible paths boil down to a binary outcome: either it all works out or it doesn’t.

Unfortunately, the ‘it all works out’ outcome has a very low probability of actually happening; so the binary outcome isn't equally weighted like a coin toss.  By ‘working out’, here’s what the central banks all striving (praying?) for:

The reason that the central banks want all of this growth and inflation isn't because it's good for you, me, or anybody we know. Instead, the bankers need it because that’s what our exponential money system requires.

Slaves To The System

It bears repeating, inflation is not rising prices — those are symptoms of inflation — but instead is the expansion of the existing stock of money and credit.  If we observe the symptom of 'rising prices', then that means the underlying mechanism of expansion of credit (mainly) and money (less important because the money supply is a only fraction of the volume of credit) is functioning.

Think of it this way: it’s like the central banks want a slightly feverish patient and so they track the patient's temperature. They tell everyone that 100 degrees, perhaps 101, is the perfect termpurature…slightly elevated, but not too much.  But the patient's temperature is merely a symptom.  The underlying reason for having an elevated temperature is having too many foreign bodies living within the patient, like having too much money and credit in an economic arena.

With increasing levels of credit in our monetary system, the system functions reasonably well and enough new loans are being made to service both the principal balances of prior loans plus their interest payments.  But with stagnant or falling levels of credit, the exact opposite is true and the entire financial system slips into collapse mode. 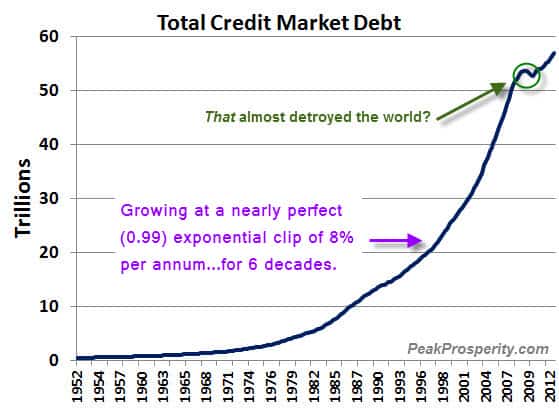 We are now in service to our system of money, not the other way around. That is, we have a money system to which we are now slaves. It's either expanding or collapsing, but has no stable state; no easy equilibrium that it can inhabit.

The tragedy in all this is that we can easily have a different system of money that does not make such unreasonable demands of us. But virtually nobody in power is (yet) discussing this idea.

The Folly Of Endless Growth

Getting back to the central bank wish list, nominal GDP of at least 6% with real growth of 3% allows governments to expand their debt loads by 3% per year without them ever getting larger in proportion to the underlying economy. That way, they never have to be paid back. They only grow larger, and this means more borrowing/credit in the system which is part of requirement #1, above.

So the entire central bank playbook, in slavish devoted service to an obviously dysfunctional system of money, boils down to endless credit growth coupled to endless economic growth.

Endless growth. When you hear of how central bankers are ‘battling deflation’ or ‘seeking price stability of at least 2% inflation’, just think to yourself What they really want is endless growth.

The next thought you should have is Hey, is that even possible? Or even, advisable?

The answers, clearly, are No and NO!

Every day, we have further confirmation of the idea that the world has limits and that economic growth requires more resources. Water, soil, fisheries, forests, ore bodies, and energy sources are all being overtaxed and rapidly depleted at even today’s level of economic activity.

If resources are finite but economic growth has to be endless (again, to support our chosen system of money, and for no other reason), then there’s a gigantic conflict brewing. And that's the subtext to the entire confusing array of political and monetary actions and reactions of late.

The idea that endless growth isn't realistic needs to be explored as often as possible simply to counteract the huge volume of spoken and written words that profess it’s exactly what we both want and need.

For most people indoctrinated with the endless growth narrative, we have to engage in a bit of deprogramming before we can have a proper conversation.

So let’s start with a simple example that lays this all bare.

China has been on a very impressive program of economic expansion. Of late, that’s slowed down just a tiny bit and it’s causing quite a bit of worry among the Chinese leadership, which believes that fast economic expansion supports social stability:

Now, let’s examine that 7.4% rate of growth using the handy ‘rule of 72’, which will answer the question: How long will it take, in years, for something expanding annually at 7.4% to double?

The answer is simply 72/7.4 which equals 9.7 years.  That is, if China continues to expand at 7.4%, its economy will be fully twice are large as it currently is in just under ten years.

Of course, you won't encounter any such dot-connecting in any of the articles you will read about China’s growth — desired or actual — because the implications of being ‘twice as large’ are not yet part of the global dialog about economic growth. Yet.

So let’s explore just one of those implications by looking at China’s coal consumption. Energy and economic activity are very tightly linked. If you want to have more economic activity, you're going to use more energy. Coal is heavily used in China to generate electricity, which is a critical form of energy for economic expansion.

In fact, when we look at China’s energy consumption over these past few decades, we note one period between 2002 and 2009 where its energy use fully doubled, with coal being, by far, the largest component of that doubling: 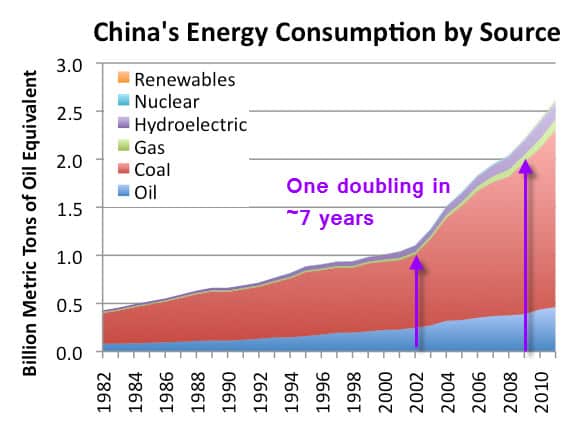 In just 7 years, energy use doubled!  Again returning to our handy ‘rule of 72,’ but in an opposite direction, we can divide 72 by 7 years and calculate that China’s energy use was growing by 10.3% per year during this period.

How does this compare to China’s reported GDP growth during the same period?  Well, according to The World Bank, between the years 2002 and 2009 China sported an average rate of GDP growth of 11%.

As expected, the growth rates for energy consumption (10.3%) and economic expansion (11%) were very tightly coupled.

Now let’s take note that, in 2012, China consumed 49% of all the coal consumed in the world. How much of the world’s coal will China consume if it doubles in the next 10 years?

Well, a doubling is a doubling: China’s current 7.4% GDP growth rate implies that in just 10 years, give or take a little, China will consume as much coal by itself as the entire world does today.

But then what? What about the next 10 years after that?  Eventually, we all have to come to the same conclusion: it's just not possible for China to double its coal consumption forever. Sooner or later, real physical and environmental limits apply.

My argument is that it’s already ‘later’. We're living through the period of time when that dawning recognition of limits will finally burst over the horizon, shining a very bright spotlight on a frightening number of our global society's unsustainable practices.

The most urgent of them all, as far as everyone reading this is concerned, is the very uncomfortable fact that it is our system of money that is most likely to break first and hardest because its very design demands endless growth, without which collapse ensues.

As the China example illustrates, the prospect of endless economic growth is simply not a workable plan because resources are not infinite. Our global obsession with growth is the very definition of unsustainable. Someday reality is going to intrude and ruin the party and very few are actually prepared for that future.

A very big problem we all share is that the world’s central banks have been vigorously defending the status quo (of endless growth) and that means we all face a very bad period of adjustment when their efforts finally fail.

That moment of failure is coming closer and closer. Recent actions by central banks have exposed their increasingly desperate mindset and have even called into question the one thing that absolutely cannot ever be questioned: the ability of the central banks to deliver on the promise of endless growth.

Central bank credibility (as fictitious as that may be) is essential to maintaining the current narrative, BUT central banks are rapidly losing their credibility (which should have happened simply via deductive reasoning a long time ago) and the strains are showing. Their actions are increasingly wild and extreme (SNB, anyone?), and it's our view that 2015- 2016 will mark the end of this long run of overly-ambitious central bankers and over-complacent markets.

When credibility in central bank omnipotence snaps, buckle up. Risk will get re-priced, markets will fall apart, losses will mount, and politicians will seek someone (anyone, dear God, but them) to blame.

In Part 2: The Consequences Playbook we spell out what will happen next and how you should be preparing today for what might happen tomorrow. Suffice it to say, a tremendous amount of wealth will be lost if (really, when) the central banks lose control. And standards of living for many will be impacted.

A little preparation today can make a huge difference in your future.