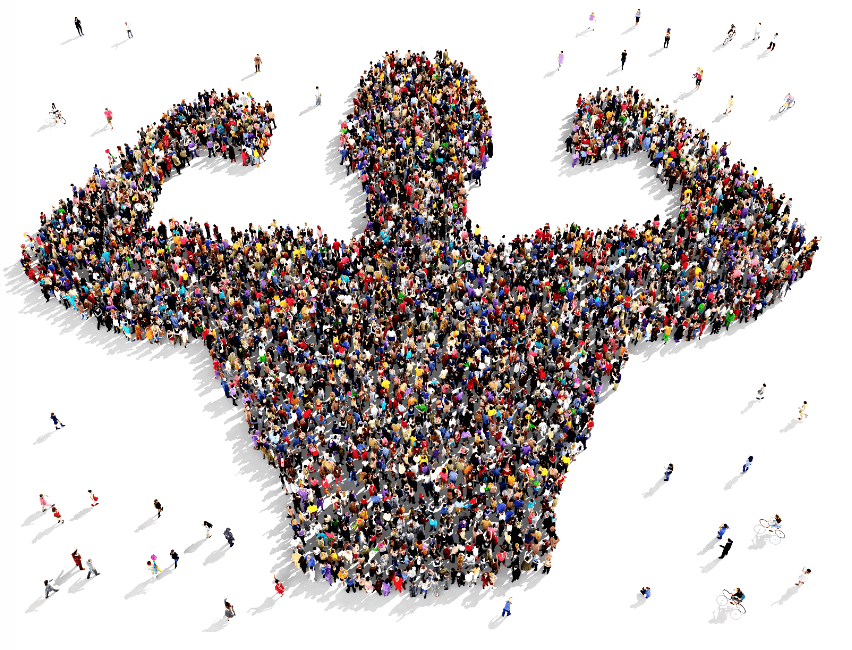 Why Common Knowledge Changes The World

Why Common Knowledge Changes The World

For those paying attention, there have been plenty of signs indicating that financial asset prices are dangerously overvalued and that the decade-long economic expansion is reversing towards recession.

But the mainstream — until just recently — has refused to see this.

Over most of 2019, investors have remained willing to push stocks, bonds and real estate to record prices. And the Federal Reserve, the Trump administration and the media have boasted about America’s “strong economy” on a weekly basis.

But suddenly, the herd has become skittish.

It’s not panicking (yet). But a lot of the predominant investor euphoria and complacency has vanished, along with more than a $trillion in market value as stocks have slid from their July highs.

Well, it’s a matter of private knowledge becoming common knowledge. An understanding that until recently was shared only by a small percentage of people is now starting to be adopted by the masses.

This is a very powerful transformation that often leads to swift changes in the status quo. Ben Hunt of Epsilon Theory explains this phenomenon very well:

The reason this dynamic — the transformation of private knowledge into common knowledge — is so important is that the social behavior of individuals does not change on the basis of private knowledge, no matter how pervasive it might be. Even if everyone in the world believes a certain piece of private information, no one will alter their behavior. Behavior changes ONLY when we believe that everyone else believes the information. THAT’S what changes behavior. And when that transition to common knowledge happens, behavior changes fast.

The classic example of this is the fable of The Emperor’s New Clothes. Everyone in the teeming crowd possesses the same private information — the Emperor is walking around as naked as a jaybird. But no one’s behavior changes just because the private information is ubiquitous. Nor would behavior change just because a couple of people whisper their doubts to each other, creating pockets of public knowledge that the Emperor is naked. No, the only thing that changes behavior is when the little girl (what game theory would call a Missionary) announces the Emperor’s nudity loudly enough so that the entire crowd believes that everyone else in the crowd heard the news. That’s when behavior changes.

Hunt uses this private-to-common knowledge transition to explain the sudden fall of previously ‘untouchable’ power brokers such as Harvey Weinstein and Jeffrey Epstein. For decades, these abusers could get away with their crimes because the sins were only recognized by a social minitory. But once the world became aware, there was no way push them back into the shadows.

In the case of today’s financial markets, few people have been willing to challenge their faith in the current expansion (now the longest in history). The ten-year ride has been easy, comfortable and dependably profitable.

They’ve been able to ignore reams of charts and data over the years warning that the lofty asset valuations weren’t supported by underlying fundamentals. What do those doomers know anyways? Just look at how well my FANG stocks keep doing!

But this week, two developments occurred that were too obvious for the complacent masses to ignore.

Why is this a big enough deal to spook the majority of investors?

Because an inverted yield curve has preceded every US recession since 1955: 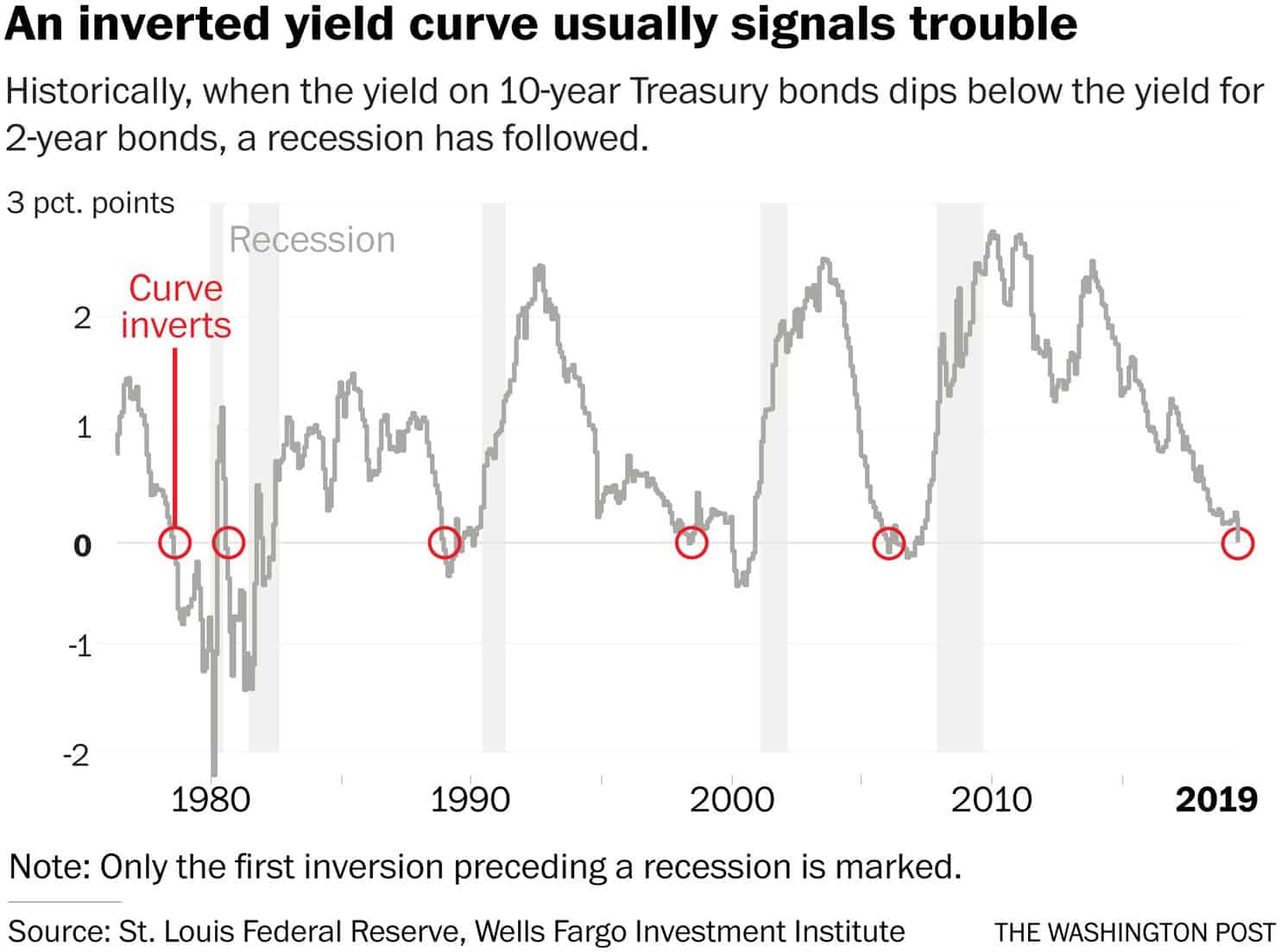 And this isn’t the only serious recession indicator received this week. Those thinking the US economy is too strong to succumb to slowing economic growth need look only as far as Europe, where Germany, by far the largest economy in the EU, just announced that it experienced negative growth in Q2: 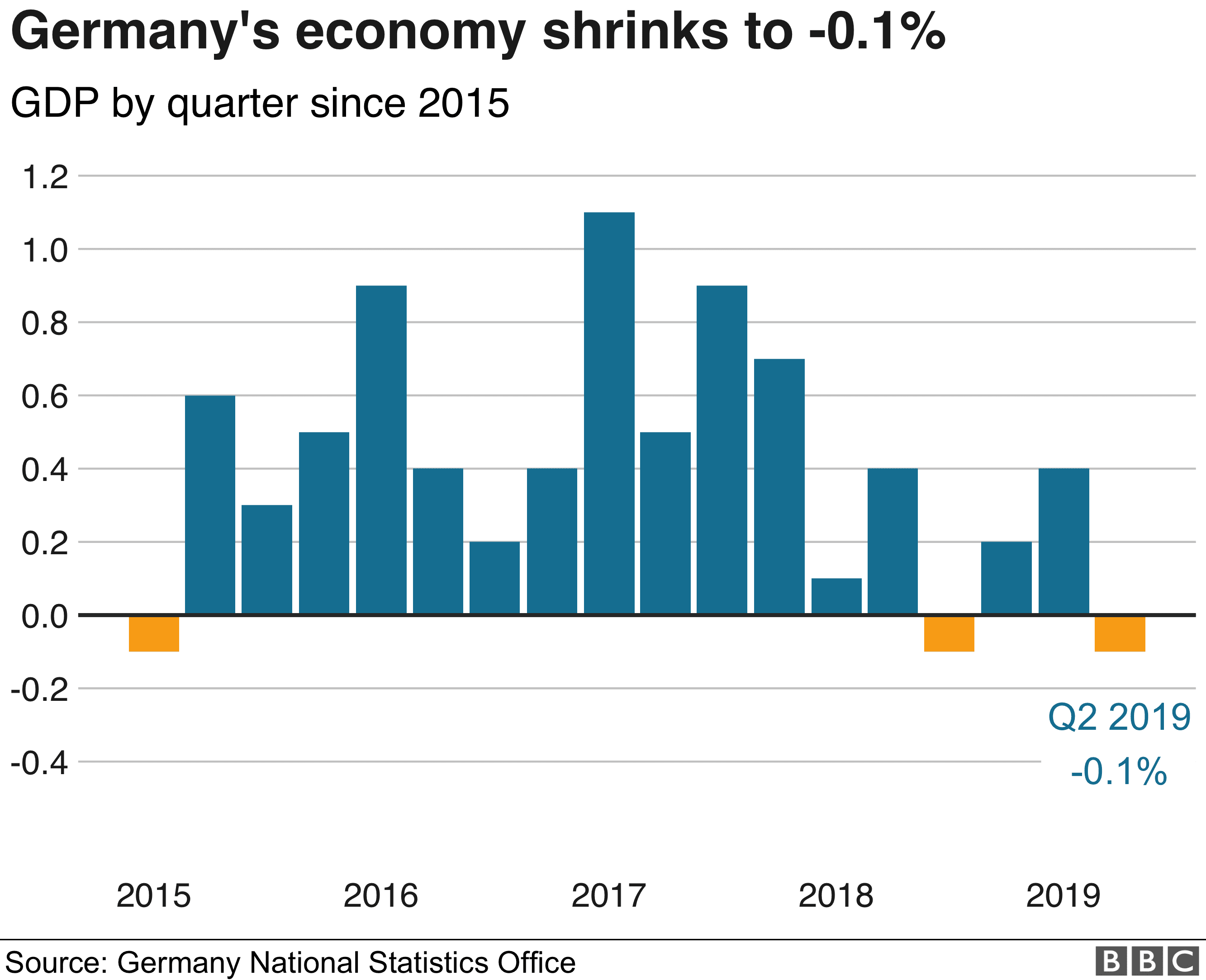 If Germany and the rest of the EU slide into recession — along with other major countries like Brazil, Mexico, the UK, South Korea and Russia, which are all facing similar risk — will there be enough demand to keep the US out of one as well?

More and more folks are beginning to have serious doubts. As they should.

This newly-accepted “common knowledge” regarding recession risk goes far in explaining why the recent interest rate cut by the Federal Reserve failed to goose the financial markets higher as hoped. Finally, a critical mass of investors is beginning to realize that more cheap debt can’t solve the problems facing a global economy already drowning in debt.

With this loss of faith in the Fed’s omnipotence, the continued ability to maintain today’s near-record asset prices gets thrown seriously into question.

What Other Knowledge Is Suddenly Becoming ‘Common’?

And there are many strings of ‘conventional’ wisdom that are unravelling fast when pulled on.

Take Apple, as an example. For years, it has been celebrated as an engine of technological innovation. And its stock has been a bulletproof juggernaut; marching higher every year since 2009.

But Apple hasn’t released a game-changing product since the iPhone, which debuted back in 2006. And now, with global smartphone saturation and slowing economies, iPhone sales have dropped for the past 3 consecutive quarters.

The company is coasting on its bygone success. Without another truly transformative product launch (sorry, air pods and smart watches aren’t going to cut it), overall revenues will continue shrinking.

Investors, whose shares currently support Apple’s nearly $1 trillion market cap, haven’t all gotten the memo yet. But when enough of them do, expect this long-time darling stock to drop hard.

The world’s central banks have justified their years of intervention as being necessary because inflation is “too low”.

But is it really?

Anyone who needs to eat, pay for a roof over their head, visit the doctor, educate their kids, or drive anywhere knows that the true cost of living is increasing at a far faster rate than the government’s official <2% calculation.

Ben Hunt, the progenitor of our above Common Knowledge Theory, predicts this as the next smokescreen to dissipate:

There’s a lot of ubiquitous private information about powerful people and powerful ideas trapped in the crowd today, just waiting for a Missionary to release it as common knowledge. The more powerful the person or the idea to be brought low, the bigger the Missionary (and platform) required. But nothing’s too big, and once the common knowledge is created, behavior changes fast. My pick for the big idea that gets taken down? The idea that inflation is dead. We all know it’s not true. We all know in our own heads that everything is more expensive today, from rent to transportation to food to iPhones. But it’s not common knowledge. Each of us may believe that inflation walks among us, but none of us believes that everyone else believes that inflation is here.

Not yet. But we’re only one big Missionary statement away.

Many pundits see the raging trade war between the US and China as a pitched match between equal adversaries.

But those who have visited and done business inside the country for many years see China in a far weaker position than is customarily appreciated or portrayed.

Jim Rickards explains how China is much more of a paper tiger than realized. It’s Achilles Heel of social unrest is being exacerbated by the trade war (see: Hong Kong protests) in ways that the communist government can’t easily quell.

Permanent loss of trade is happening as manufacturing switches to other countries, at a time when capital outflows are increasing and Chinese stocks and real estate prices are falling. Meanwhile, the debt bomb inside China is staggering relative to the US, and it’s finally nearing its explosion point.

An implosion of China’s economy, perhaps coupled with serious social distemper, is a new — previously unthinkable — factor the world is suddenly realizing it needs to take into account.

Behavior changes ONLY when we believe that everyone else believes the information. THAT’S what changes behavior. And when that transition to common knowledge happens, behavior changes fast.

Amidst the market volatility this week, we issued an advisory to take action.

We reminded readers that market tops are processes. They occur over a long time.

But market corrections are events. They tend to happen suddenly and violently. If you’re not positioned for them in advance, there’s usually no time to react once they’re underway.

With the risks of recession quickly becoming common knowledge amongst the mainstream, we declare the time for planning is over. It’s now time to act, to get your advanced positioning in place. Because events are going to start happening fast, as Ben Hunt warns.

Specifically, we urge you to strongly consider taking the following steps in your portfolio (each one below links to a helpful primer with guidance):

We’re loud advocates of taking these steps while working with a professional financial advisor who understands and appreciates the risks that are in play. There aren’t many out there who do, but their assistance in helping you make well-informed decisions can be extremely valuable.

Earlier this week we showed exactly how valuable this can be, providing an example of how one such advisor protected (and grew) client accounts while the S&P 500 dropped -5.4% from its July highs.

So if you have similar goals for your money — if, you place a higher priority on return OF capital vs return ON capital during this time of heightened risk — then we sure hope you’ve already positioned your portfolio wisely for the future you see coming.

If not — and we know from the emails we receive that many of you still have not — it’s not too late. But it may be very soon. Time looks to be getting very, very short.

Put your plan into action. If you don’t have your plan finalized yet, meet with a good professional advisor asap. And if you’re having trouble finding a good one, consider scheduling a portfolio review with the advisor endorsed by Peak Prosperity (it’s completely free)

Sentiment is finally breaking as critical but previously-private knowledge is quickly becoming “common”.

Once it breaks fully, the ride downward will likely be very sharp, quick and brutal for everyone caught unprepared.