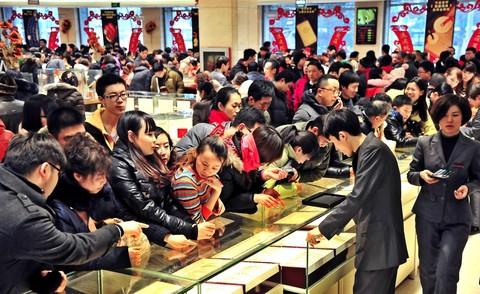 With the financial experts claiming, some gleefully, that gold has "lost its safe haven status" in the aftermath of its biggest tumble in 30 years, many commentators  thought (hoped?) that the dramatic price drop would steer people away from gold ownership. To my eyes, the past week has all the earmarks of a high-gloss propaganda campaign complete with well-placed anti-gold stories in the media and the careful use of language aimed at sowing doubt about gold's ability to be a store of wealth.

But for those who consider gold a store of value, the recent gold slam is a gift: an invitation to purchase more sound money with fewer units of paper currency. In other words, a sweet deal.  Gold and silver on sale and the world is taking advantage.

I predicted this last Friday, when I wrote, "[k]nowing the lower prices will only exacerbate this West-to-East flow [of gold], I therefore thought that the bullion banks and central banks would not have dared push that dynamic any further."

Well, by all accounts, the flow of gold from West to East is now accelerating.

“The season is very hot for buying” with weddings and other auspicious dates coming up, Choksi said. “The decline will be positive for jewelry as there will be a pick-up in demand because affordability will increase. Volumes will increase.”

“We rushed to buy as soon as we saw prices fall so much and decided to buy jewelry early for our daughter’s wedding in January,” said Blossom D’souza, while browsing through a selection of bangles in a jewelry store in Mumbai’s Chira Bazaar area. “Now we can buy more gold within our budget.”

And this, regarding Australia:

The Perth Mint reports that retail customers are increasing purchases at a record rate even as gold slumps to a 21 month low.  As the experts were proclaiming the "Death of Gold", the Perth Mint website recorded the highest activity of the year and one of the best days of the past year.

Bargain prices on gold and silver have greatly increased the demand for physical gold and silver by the public.  Demand for gold coins have [sic] skyrocketed with sales of Australian gold bullion coins increasing by 48% in the first quarter over the comparable prior year period.

A couple of mainstream media reports linked the gold slam to increased selling by Japanese investors, those ideas turned out to be either speculative, premature, or both:

(Reuters) – When he woke up to news of a collapse in gold prices, Yujiro Yamashita, 63, made his way to Tokyo's posh Ginza district to buy the precious metal for the first time in 20 years.

Yamashita and other contrarian, individual Japanese investors understand that gold is a volatile investment, but say that buying the precious metal is better than the alternatives.

A week ago, as the yen-denominated price neared a new peak, jewelry stores and gold merchants across Japan saw long lines of mostly older Japanese looking to cash in on unwanted jewelry and other items that they had held for years.

But on Tuesday, buyers outnumbered sellers by a wide margin. At Ginza Tanaka, the headquarters shop of Tanaka Holdings, gold buyers waited for as long as three hours for a chance to complete a transaction.

Meanwhile, the Chinese and Thai, too, are rushing to buy gold as a consequence of the new, lower gold prices, with high sales volumes and shortages being widely reported.

So this is a fairly large story that can be summarized in basic Econ 101 terms: Supply, demand, and prices are all interrelated.  Drop prices and demand increases, which then lowers supply.

In the U.S., all of the dealers I talk to are reporting huge demand and brisk buying. Silver in any form is quite hard to come by unless you want to pay premiums of 20%+ per ounce above spot price. Delivery times are 5 to 6 weeks out now – that's an unusual situation.  If this recent slam was designed to scare people away from gold, it did not have that desired outcome; in fact, just the opposite.

The Wednesday prior to that fateful Friday morning, one wall of the Bingham Canyon mine began to shift more rapidly. So they took personnel safety precautions, moved construction equipment out of the way, and prepared for a major ground slide event. At 9:30 PM on Wednesday, that wall gave way, sloughing tens of millions of cubic meters of earth into the operating pit:

This Gold Slam is a Massive Wealth Transfer from Our Pockets to the Banks.

An important question to ask in the face of such attacks is cui bono? Who benefits from dropping the price so dramatically and breaking faith in the precious metals as a safe haven?

The Internet is swirling these days with rumors of a near inventory failure at the LBMA (London Bullion Market Association), a 'too big to fail bank' of a large sovereign country in Europe that's teetering, that needed protection against its derivative exposure. One of these could be true – perhaps all of them might be; I honestly don't know yet. We have imperfect vision into markets these days, and these are each developments that the central powers would be doing their utmost to shield from our view.

But there's certainly a lot of smoke in the air surrounding the precious metals, and as the adage goes, where there's smoke, there's fire.

In Part II: Why There May Be a Lot Less Gold Than We Realize, we explore a particularly interesting possible reason for the suppression of the precious metals. A recent report issued by Sprott Asset Management calculates that the U.S. has silently exported a massive amount of its gold reserves over the past two decades.

If accurate, it puts the long-term manipulation of the gold and silver markets into context. And it gives a reason for why breaking faith in the precious metals at this time would be an important objective.