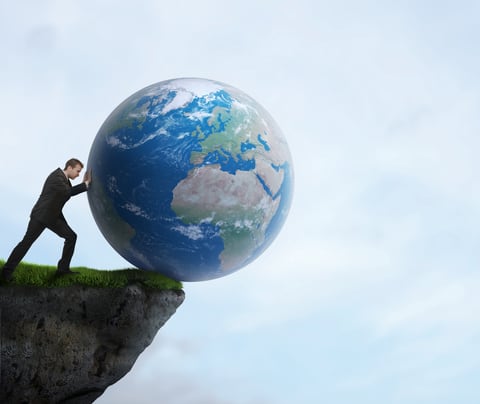 The Structural Endgame of the Fiscal Cliff

The Structural Endgame of the Fiscal Cliff

To understand this endgame, we need to start with the financial and political basics of wealth and power in the U.S.

1.  Wealth and thus political power are highly concentrated.  The dynamics of rising wealth disparity and the increasing concentration of wealth are debatable; the disparity is not.  Roughly 70% of all financial wealth is held by the top 5%; within this top layer of ownership, the top ½ of 1% hold an outsized share. 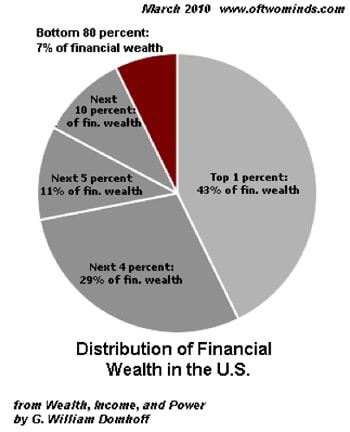 4.  There are roughly 127 million people who receive government transfers or benefits.  Sixty-one million recipients of Social Security and Medicare and 66 million people receiving welfare (SNAP food stamps, housing credits, Medicaid, etc.)  Since there are about 115 million full-time jobs in the U.S., this means there are 1.1 government dependents for every full-time worker in the U.S.  (For context, there are 315 million Americans and roughly 142 million jobs.  About 38 million of these jobs are part-time that pay less than $10,000 annually.  Fifty million wage earners earn less than $15,000 a year, and 61 million earn less than $20,000 annually.)

The Federal government counts a person who is self-employed and earns $100 a year as "employed" and a person who works one hour a week as "employed."  As a result, the only meaningful metric is full-time employment. 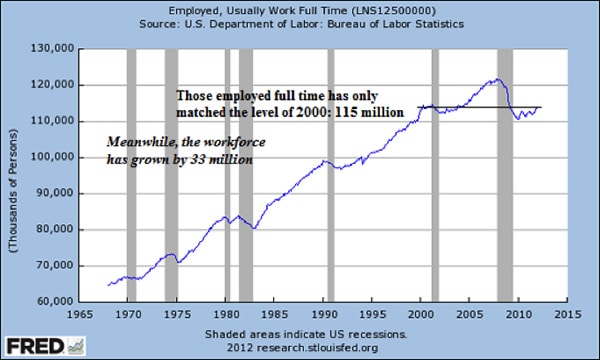 The top 25% who pay most of the taxes, roughly 30 million people, are a political minority compared to the 127 million people drawing direct payments/benefits from the Federal government and the 65+ million who pay essentially no income taxes (though they do pay the 7.65% Social Security/Medicare payroll tax).

5.  This progressive tax structure is based largely on earned income; i.e., wages and self-employed income.  Unearned income (rents, dividends, stock options, hedge fund management fees, etc.) is treated much differently than earned income.  Unearned (rentier) income is governed by highly complex tax codes that lend themselves to politically controlled loopholes, subsidies, and exclusions. As a result, some profitable corporations not only pay no tax but actually receive subsidy payments from the government.  In other cases, politically powerful enterprises have tax laws written specifically to limit or erase their tax burden.

6.  The assets that generate unearned income are highly concentrated, and as a result so is the unearned income.  The top 1% owns twice as much stock-market wealth as the bottom 90%.  This income-producing wealth enables the top 1% to act as a financial aristocracy, buying influence and favors from equivalently concentrated political Elites. 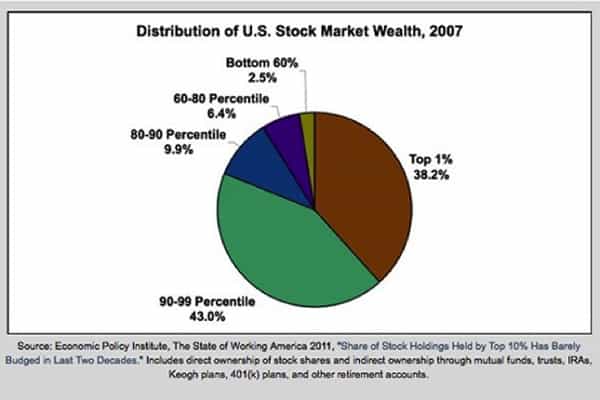 This preponderance of ownership of income-producing assets is reflected in the income stream flowing to the top 5%: 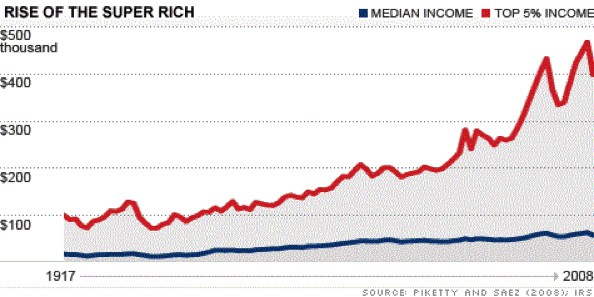 7. Those without meaningful unearned income have seen their real incomes drop substantially.  Real household income has declined almost 10% since 2000: 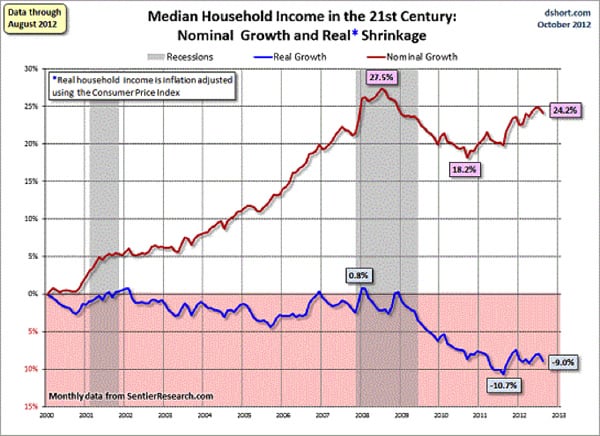 Net worth has also declined as serial bubbles in stocks and housing popped:  American Households Hit 43-Year Low In Net Worth

Here is another look at the data.  Note that the drop in all household income is less than the decline in working-age households.  This is the result of Federal transfer payments to retirees, those on disability, aid to low-income households, etc., paid for with unprecedented deficit spending ($1.3 trillion annually). 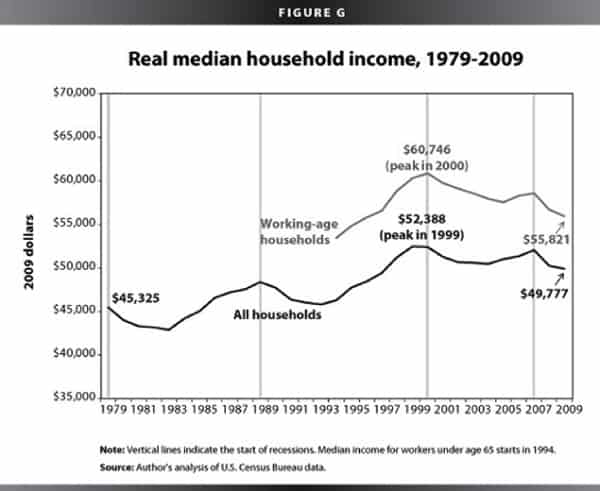 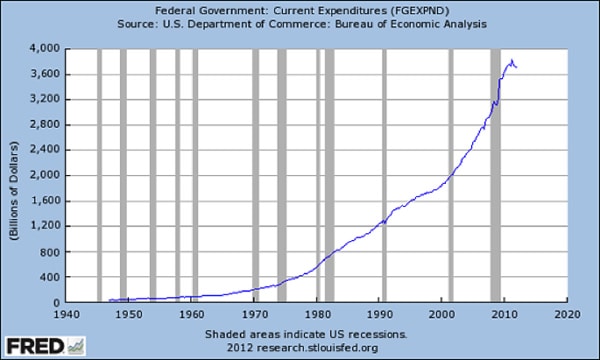 Social Security costs over $800 billion, Medicare and Medicaid costs total about $800 billion annually, and the Pentagon/National Security budget is around $800 billion.  These three consume all Federal tax revenues.  Add in interest on the ballooning national debt ($220 billion to owners of so-called external Treasury debt) and the nation is running a $200 billion deficit even if the rest of the $1.1 trillion Federal spending were to magically vanish.

Federal expenditures have skyrocketed in the past 12 years, far exceeding inflation:  http://globaleconomicanalysis.blogspot.com/2012/12/congressional-spending-problem-in-easy.html 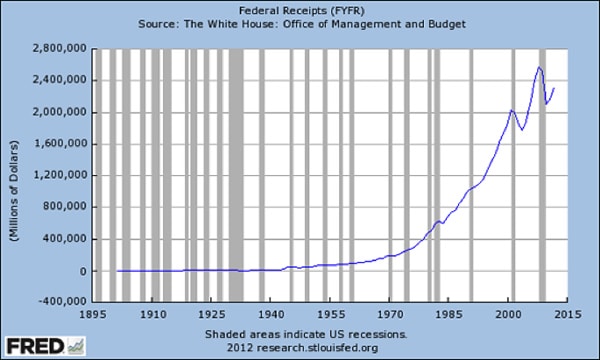 Put these structural dynamics together and the endgame becomes clearly visible: Politically, a Tyranny of the Majority comprised of those who draw direct transfers/benefits from the Federal government, is ruled by the top ½ of 1% financial aristocracy who own the majority of income-generating assets.  The minority, who pay most of the taxes (the 24.5% between the majority and aristocracy), will see their taxes rise as the aristocracy buys loopholes and exclusions while the bottom 50% pay no income tax.

Financially, the Federal government’s spending has outrun the tax revenues being collected.  Structurally, Federal expenditures for entitlements (Medicare, Medicaid, Social Security, Veterans Administration, etc.) will rise as Baby Boomers retire en masse over the next 15 years, while tax revenues will stagnate along with earned income.

There is no way to square these circles.

The political foundation of America is starkly unjust.  An entrenched financial Aristocracy buys the complicity of the bottom 50% and retirees with Federal transfers – a Tyranny of the Majority.  The 24.5% below the Aristocracy who pay most of the Federal taxes are dominated by this alliance. This may be legal, but is it just? Even more critically, is it sustainable?

The Status Quo rests on this Grand Political Bargain:

This Grand Bargain is coming apart as the promises made to everyone cannot possibly be met.  Claims on welfare and disability programs are skyrocketing at the same time that the demographics of an aging populace are causing 10,000 people a day to enter Social Security and Medicare, the two costliest government programs.  Meanwhile, the upper middle class that pays most of the taxes has been slammed with lower income and a devastating drop in their housing-based net worth.

According to former Congress members Chris Cox and Bill Archer, writing in the Wall Street Journal:

Why $16 Trillion Only Hints at the True U.S. Debt

The actual liabilities of the federal government—including Social Security, Medicare, and federal employees' future retirement benefits—already exceed $86.8 trillion, or 550% of GDP. For the year ending Dec. 31, 2011, the annual accrued expense of Medicare and Social Security was $7 trillion.

That is roughly double the entire annual Federal budget.

They go on to note that “to collect enough tax revenue to avoid going deeper into debt would require over $8 trillion in tax collections annually.”  Expropriating the entire income of the top 25% of households that pay almost 90% of the tax and all corporate taxes would only bring in $6.7 trillion.

Clearly, the promises that have been made to 315 million Americans cannot be met, and the current strategies of financial repression (zero-interest rate policy, etc.) and massive fiscal deficits that subsidize favored cartels in defense, housing, education, and healthcare are unsustainable. The politically expedient “fixes” to the Fiscal Cliff (a slight increase in the tax rate on earned income above $250,000, etc.) will not fill the $86 trillion gap between what has been promised and what can be collected in taxes.

What few dare admit, much less state publicly, is that the Constitutional limits on the financial Aristocracy and the Tyranny of the Majority have failed.  This guarantees a future Constitutional crisis as each political class – the financial Aristocracy, the top 24% who pay most of the taxes, the dwindling middle class and the bottom 50% who depend on Federal transfers – will battle for control as the Status Quo collapses under the weight of its unsustainable promises.

In Part II: What Will Happen When We Hit the Fiscal Cliff, we explore the repercussions that will result from this crisis.  Looking at the three most probable outcomes that will impact U.S. households, 2013 looks like it is shaping up to be a year where there will be little shelter available to financial assets.