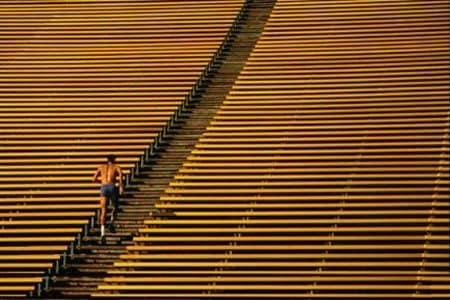 The Importance Of Perseverance

The Importance Of Perseverance

Most of us work hard at earning our income, and on figuring how best to save and invest it.

We all want a better future, for ourselves and our families — and especially for our children. Achieving financial security is an important milestone on the path to making this ambition a reality.

And so, day after day, we head off to work and put in another day's labor, hoping we're one step closer to the moment when we finally have "enough" money socked away.

There are literally thousands and thousands of books that have been written on how to amass wealth. Some excellent, some less so; and too many not worth the paper they're printed on. Each posits its own special strategy, promising a future of riches to the reader. Of course, were there a sure-fire recipe for making millions, it's a safe bet that the last thing the guy who figured it out would do is share it with the world.

But as mentioned, some of these books have real value. One whose lessons have stuck with me in the decades since I first read it is The Millionaire Next Door: The Surprising Secrets of America's Wealthy, first published in 1996 by two PhD researchers, Thomas Stanley and William Danko.

Unlike most personal finance books that pitch a particular model for "becoming rich", this book is the summary of a scientific profiling of people who have successfully amassed wealth. Rather than push an ideology, it simply reveals: These are, statistically, the factors wealth-accumulators have in common.

The book is fun to read, as many of the authors' research results defy our conventional image of a "millionaire" (and, remember, when the research was conducted over 20 years ago, $1 million in net worth meant substantially more than it does now):

Many of the specific mindsets and behaviors of these Prodigious Accumulators of Wealth (PAWs) will likely resonate well with readers of PeakProsperity.com, Zero Hedge, and other similar websites. Pragmatism, practicality, and discipline are big hallmarks of the PAWs' success.

Accumulating Wealth Is Easier Than Sustaining It

But as someone aspiring to build financial wealth for my own family's long term benefit, I was dismayed by one of the insights from the book: Self-made fortunes are often quickly lost after being passed on, usually within one generation.

Does becoming a millionaire mean you're doomed to have spoiled kids who quickly fritter your money away trying to keep up with the Rich Kids of Instagram?

While that does happen in a minority of instances (usually combined with a failure of parenting), the answer is "no".

The actual reason for this swift wealth dissipation is really interesting and more nuanced. And it's caused by the unwitting choices of the millionaires themselves…

When Protection Hurts Rather Than Helps

Understandably, most wealthy parents want their children to be well-off, too. But they don't want their kids to have to suffer through the years of uncertainty, anxiety-ridden toil, and risk that they had to endure. So they guide their children into "safer" and more elite professions — like medicine, law, finance, accounting, etc.

But perversely, this insulates their children from the very stimuli that made these self-made millionaires successful. Overcoming adversity, developing iron discipline, learning to get by without enough, facing fears, turning failures into successes because there is no other option, etc.

Without this 'Masters in Grit' from the University of Hard Knocks, their children are more professionally cautious and less likely to make sacrifices in their household spending when they can't afford it. By protectively insulating their children from the more Darwinian forces of capitalism, wealthy parents often unwittingly make their children less likely to become PAWs. The kids just don't develop the musculature for it that their parents did.

As Stanley and Danko put it:

The first generation affluent in America are typically entrepreneurs. They beat the odds. Their businesses succeed and they become affluent. Much of their success depends on their living a frugal existence while building their businesses. Luck is often involved. And most who succeed understand that circumstance could have gone against them.

Their children will have it better. They will not have to take significant risks. They will be well educated. They will become physicians, attorneys, and accountants. Their capital is their intellect. But unlike their parents, they will postpone entering the job market until they are in the late twenties or even early thirties. And most likely they will adopt an upper-middle class lifestyle as soon as they start working, a much different lifestyle than their frugal parents had when they started their businesses.
Often their children are not frugal. How could they be? They have high-status positions that require higher levels of consumption and thus lower levels of investing. As a consequence, they may require economic outpatient care. In spite of earning high incomes, as most professionals do, they are obligated to spend.

My takeaway from Stanley and Danko's research is that adversity is an experience parents should expose — rather than shield — their children from.  A very different approach from the "helicopter' form of parenting so ubiquitous these days.

Of course, this should be done responsibly, with safeguards when needed (someone tossed in the deep end of the pool doesn't instantly learn to swim). But, in order to learn how to actualize their own value-creation, our children need to "find their way" by persevering through the common challenges life will throw at them — like setbacks, doubt, fear, and being bested by the competition.

As Chris and I point out in our book Prosper!: How To Prepare for the Future and Create a World Worth Inheriting, humans are wired for learning from failure. If we don't fail, we don't fully mature:

The Value Of Mistakes

Another reason the kaizen framework is useful to know about is that it bears strikingly similar resemblance to the way in which our minds learn.

To gain new knowledge — to become smarter — our brain formulates a hypothesis, tests it out, observes the results, processes them, and then begins the cycle anew: 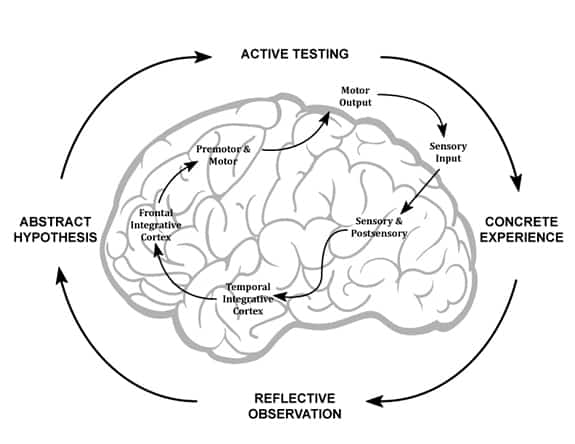 This test-and-measure, or “trial-and-error”, approach is the way we are wired for self-betterment, which brings us to the importance of mistakes.

When building resilience, you’re going to make them. A lot of them. You’ll be trying things you’ve never done before, across all aspects of your life. And much of the coming change on a macro level is out of your control, making it impossible to predict without error. Mistakes are inevitable.

This scares many. Some to the point of immobility. You need to get past that fear.

Well, as we’ve hopefully just demonstrated, mistakes are required for learning and self-development. Whether it’s manufacturing a Toyota or growing a tomato, our brains need to observe an outcome and then ask: What could we change to do it better next time? We need to experience how it doesn’t work perfectly in order to imagine how it might in the future.

When we fail, we need to conjure our inner Edison to remind us that the only true failure lies in failing to try. We must remember that the goofs, the glitches, the curve balls – the mistakes – are our milestones to mastery.

Mistakes are so important, in fact, that if you’re not making them now, and plenty of them, you’re putting yourself at a real disadvantage. Why? Because, as of the writing of this book, life still works pretty much as we’ve known it. Things are relatively tranquil in the world. This is the time to be making your mistakes – while the cost of failure is low, as is the threat level to your quality of life.

You know when’s a terrible time to learn about how to put hedging safeguards into your financial portfolio? After the market has already corrected by 50% (as it last did during the 2008 crisis). Try figuring out how to source a meaningful percentage of your calories locally after a liquid fuels emergency has stopped the trucks delivering produce to your grocery market. Failure at that moment could be life-threatening.

So as you begin trying things you’ve never done before while working on your resilience, embrace the mistakes. Hope to make them, even.

Just make sure you learn from them.

Mistakes are great, the more I make, the smarter I get.

I think about all this a lot as a parent. Where do I offer guidance? And where do I step back, despite seeing disaster ahead? It's not always an easy call to make.

Though as my kids have grown, I've learned that the latter approach is usually the faster path in terms of their learning process.

And I'm not heartless about it. When the failures arrive, there are hugs as well a 'Monday morning football' discussion about what can be done differently next time to effect a better result. The key is building up their confidence in solving their own problems, while making it clear you're there to help support them in case something truly calamitous overwhelms them.

One of the best ways to equip your kids for dealing with life's uncertainties is to give them a rock-solid understanding of themselves: their strengths, their passions, and what they want to accomplish in this world. These will be the compass points they navigate by when the path immediately ahead is unclear.

A great resource for this is the Johnson O'Connor aptitude test, which I've discussed at length several times before. It's the best test, by far, that I'm aware of for gaining empirical clarity into these 'compass points'. I took it myself and found it immensely useful — years later, I still leverage the insights gained on a near daily basis. I think we'd live in a much better world if every high schooler had the benefit of taking this test before deciding on what path to take in life — many fewer people would feel stuck in unwanted careers, plodding through in quiet desperation. In fact, my oldest child will be taking the test next year (she's just turning 15, the minimum age at which the results become statistically predictive).

Those interested in learning more about the aptitude test offered by the Johnson O'Connor Research Foundation can listen to this podcast of my discussion with the center's NYC director:

In addition, there's a good number of worthwhile tests and exercises that help with this kind of self-exploration that are described in my book Finding Your Way To Your Authentic Career. Again, the objective is to arm your child with self-knowledge that will enable prudent decision-making — whether you're around to contribute guidance or not.

As Louis Pasteur exclaimed, "Fortune favors the prepared mind". If your intent is to create fortune for your family members, prepare them mentally and emotionally to sustain and nurture it.

Of course, the environment we live in has changed from when The Millionaire Next Door was first issued (several asset bubbles have since transpired; crony capitalism has worsened; QE-liquidity is creating a growing wealth gap between classes) — but I think, in many ways, that makes its pull-yourself-up-by-your-own-bootstraps guidance feel more timeless.

In his recent report, Part 2: The Keys To Prosperity, contributing editor Charles Hugh Smith looks at the macro trends most likely to impact our way of life over the next several decades. Like Stanely and Danko, he sees those with the ability to persevere through adversity as most likely to survive and thrive through the a future shaped by growing economic, energetic and environmental scarcity. If you haven't already read it, it's worth your time to do so now.