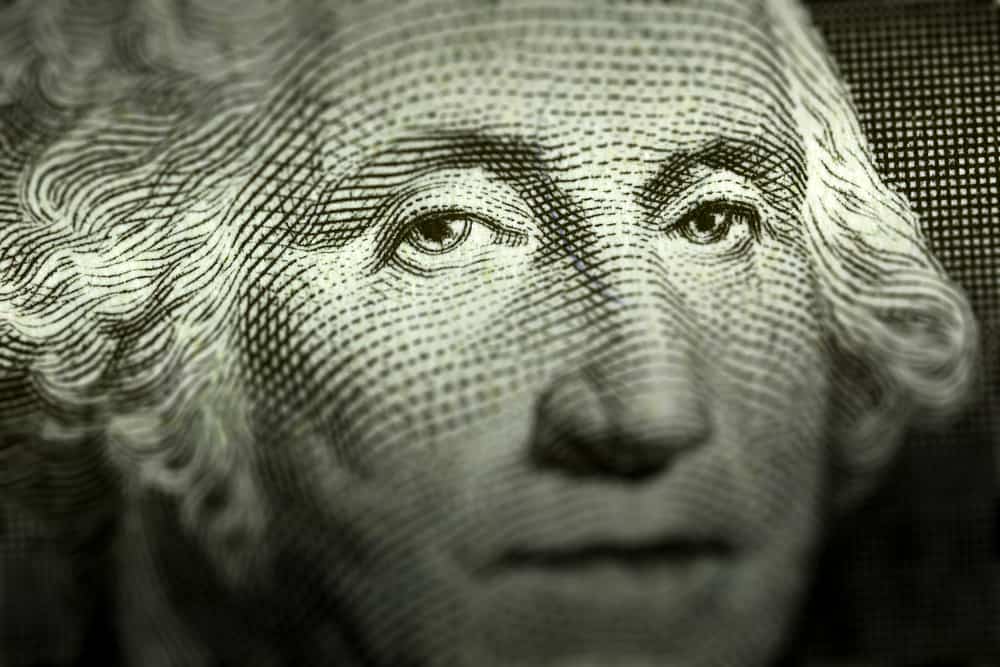 The Dollar May Remain Strong For Longer Than We Think

The Dollar May Remain Strong For Longer Than We Think

I have long been a dollar bull, not for any over-arching reasons based on inflation, deflation, rising geopolitical multi-polarity or any of the other issues that touch on the dollar’s valuation vis-à-vis other currencies. My analysis focuses on a few basics:  the dollar’s status as the global reserve currency, Triffin’s Paradox (a.k.a. Triffin’s Dilemma) and global capital flows into the dollar and dollar-denominated assets such as U.S. Treasury bonds.

Country A trades $10 billion of goods and services with Country B, which does $10.01 billion of trade with Country A.  The two nations agree to a trade pact that enables the two nations to trade currencies directly, that is, without converting the payments for trade into a third currency such as the dollar.

Once the bilateral trade is settled, a modest $10 million remains as a surplus/trade deficit.  The owner of the surplus (Country B, in this example) can trade that excess currency on the global foreign exchange (FX) market, use it to buy goods or services, or hold it. The modest $10 million is a tiny slice of the two trading nations’ money stock and gross domestic products (GDP), and it has little effect on either global or domestic finance. The $10 million is a small claim against the currency of the nation running the trade deficit (Country A, in this case).

The main takeaway is that billions of dollars of trade transactions may yield very little surplus/deficit.

Trading currencies are examples of the transactional nature of money: money enables transactions.

A reserve currency, on the other hand, is an example of money as a store of value: nations hold reserve currencies as stores of value that can be sold to support their own currency if the need arises.

1. It must be liquid – that is, it can be readily bought and sold on the global foreign exchange market in size, i.e. large quantities, without affecting the value of the currency;

2.  Its value must be relatively stable – that is, it trades in a narrow range with other currencies, and

3.  Its value is set by supply and demand – i.e. capital flows and market forces, rather than an arbitrary peg.

Many observers greet the announcement of recent bilateral or multi-lateral currency agreements as evidence the U.S. dollar is weakening.  But this is mixing apples and oranges: the U.S. doesn't gain much by issuing a currency that serves transactional needs — it offers no profit to the U.S. if trade between other nations is conducted in yen, renminbi, euros or quatloos.

The demand for transactional currency is temporary. Transact the trade, and then the cash moves on to the next transaction.

Nations that issue reserve currencies must issue enough of their currency to satisfy the global demand for reserves, and the only way to do this is run substantial *and* permanent trade deficits.

This brings us to Triffin’s Paradox, which has two basic parts:

1.  Any nation that issues the reserve currency must run a trade deficit to supply the world with surplus currency to hold in reserve and as a result,

2.  The issuing nation faces the paradox that the needs of global trading community are generally different from the needs of domestic policy makers.

The global trading community requires that the issuer of the reserve currency run trade deficits large enough to satisfy the demand for reserves, while domestic audiences want a strong export sector, i.e. a trade surplus.

You can’t have it both ways: if you want to issue a reserve currency, you have to run a trade deficit that is commensurate in size with the global demand for your currency.

Since supply and demand set price, this push-pull affects the value of the U.S. dollar: U.S. exporters want a weak dollar to spur foreign demand for their products, while foreign holders of the USD want a strong dollar that holds its value/purchasing power.

Why do countries need reserves in the first place?  The answer can get complicated, but the basic dynamic is supply and demand: if Nation A prints vast quantities of its own currency (let’s call it the quatloo) and uses the cash to buy goods and services without creating an equivalent amount of goods and services to sell to other nations, it will run a large trade deficit.

The supply of quatloos will soon exceed the demand: everybody who accepted freshly printed quatloos for their exports wants to trade them for goods or unload them as soon as possible. As a result, the value of quatloos on the global FX market falls, and Nation A is in danger of plunging into a currency crisis: as the value of the quatloo declines, the price of imports rises within Nation A, and soon people can no longer afford imports from other nations—for example, grain and oil.

One way Nation A can support the value of its quatloos is to sell its reserve currency and use the cash to buy quatloos, soaking up the excess supply that is depressing the quatloo’s value. So currency reserves act as a stabilizing anchor for the nation’s own currency.

The Supply and Demand for Dollars

There are number of reasons why nations might choose to buy or sell U.S. dollars, or assets denominated in dollars such as Treasury bonds. Let’s start by noting that the dollar is not the only reserve currency; the USD is roughly 62% of global currency reserves, the euro is about 25% and other currencies make up the balance. 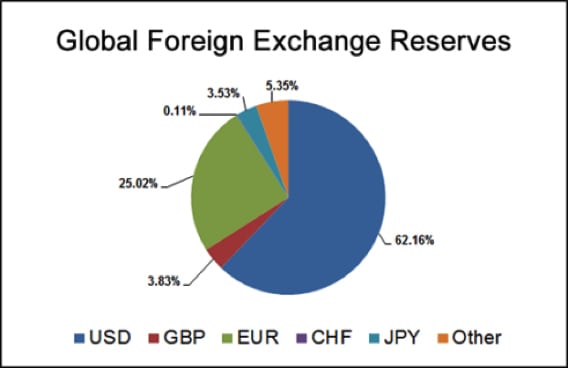 Nations might sell dollars and buy another reserve currency to diversify their holdings, hedge against a decline in the dollar relative to other reserve currencies, or perhaps as a form of geopolitical weapon or protest against American hegemony or specific policies. 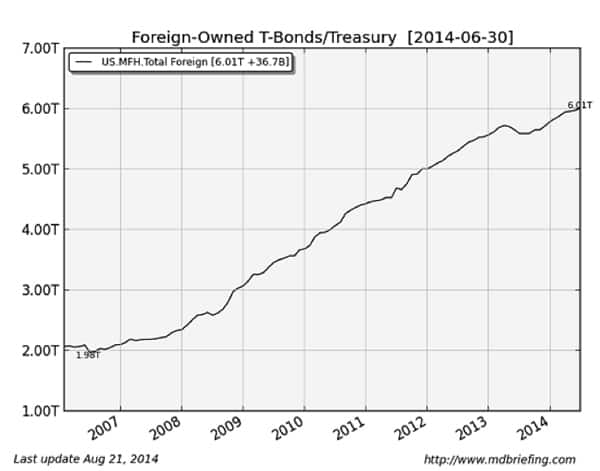 For years, observers have seen the massive Treasury holdings of China as a potential financial weapon: if China were to dump a trillion dollars of Treasuries, that sale would disrupt the global market for U.S. bonds. (I have always held the Fed could issue a fresh $1 trillion and buy the lot in one fell swoop.)

But interestingly, we find instead that China’s holdings of Treasuries have been relatively stable recently, at around 20% of total foreign-owned Treasury bonds: 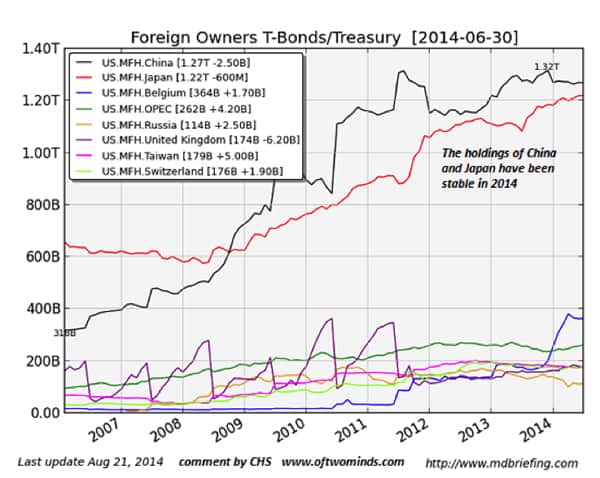 The discussion of major foreign holders of Treasury Securities, i.e. foreign states and central banks, often overlooks one key driver of this trade: states seeking to weaken their own currency to boost their exports sell their own currency and buy U.S. dollars (or dollar-denominated assets such as Treasuries). This increases the supply of their own currency, pushing the value lower, while the increased demand for dollars pushes the value of USD higher.

In terms of foreign trade, this weakens the currency of the buyer of Treasuries in relation to the dollar.

In other words, major holders of U.S. Treasuries such as China and Japan have an over-riding incentive to keep buying Treasuries: buying dollars stabilizes or weakens their currency vis-a-vis the U.S. dollar, making their goods and services cheaper in the U.S. and thereby boosting their exports.

We now have a basic understanding of the forces of supply and demand for the dollar as a reserve currency: nations buy dollars as reserves, and also to weaken or stabilize the value of their own currency against the dollar, a strategy designed to boost their exports to the U.S.

On the supply side, the U.S. issues a surplus of dollars for others to use as reserves by running a trade deficit. Should that deficit shrink, the supply of dollars will also shrink.

In Part 2: Why The US Dollar Could Strengthen – A Lot From Here we analyze the surprisingly likely drivers that may keep the US dollar strengthening over the next few years, especially if another economic/financial crisis arrives. While there are many reasons to fear for the longer term viability of the US dollar given America's current misguided monetary policy and exponentially increasing debt & liabilities, the next few years could well see it appreciate further by 50-100% relative to the world's other major fiat currencies.

For those understandably disgusted by the reckless expansion of the US money supply over the past six years, it's vitally important to remember that the road to our monetary endgame is not a straight line, nor necessarily intuitive. To have the best chance of remaining solvent, understanding the likeliest pathways the route will take is often nearly as important as correctly predicting the final destination.