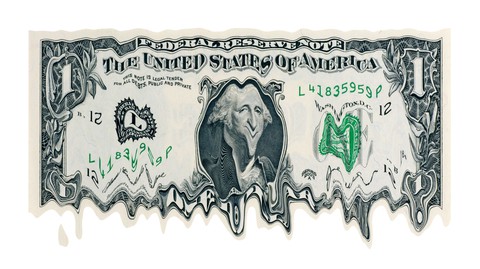 Say Goodbye to the Purchasing Power of the Dollar

Say Goodbye to the Purchasing Power of the Dollar

On a long solo car trip last week, I listened to several podcasts to pass the time. One was a classic: The Invention of Money, originally released by NPR's Planet Money team back in January of 2011. I highly recommend listening (or re-listening) to it in full.

The podcast is an effective reminder of how any currency in a monetary system is a fabricated construct. A simpler way to explain this is to say it has value simply because we believe it does.

Through the centuries – in historic cultures like that of Yap Island who used giant, immovable stone disks for commerce, to today's United States, whose Dollar fiat currency exists primarily in digital form – "money" is able to be exchanged for goods and services because society agrees to accept it (at a certain rate of exchange).

But what happens when a society starts doubting the value of its money?

The podcast goes into the mind-blowingly simple process by which new money is created in America by the Federal Reserve (or the "Fed"). That is to say:

The banks then, if they want to, lend this new money out into the economy on a fractional basis, adding even more "thin air" dollars to the nation's money supply.

This unique ability in America lends the Fed enormous power. The power to create new money from nothing. With no limit.

And with that power, the Fed can control and/or influence economies and markets the world over.

Should such power exist? And if so, should a single private entity owned by the major players in the banking system be allowed to wield it?

Such power certainly has its dangers.

Back in 2011, the Planet Money team described the normally staid Fed as having "gone to central-bank Crazytown". Panicked by the global credit contraction, the Fed began a series of programs intent on combating the deflationary force of credit defaults. It essentially force-fed liquidity (a.k.a. freshly-printed dollars) to the world, using ham-fisted tactics that it had fastidiously eschewed over the previous century:

As the financial crisis unfolded, the Fed created…trillion[s of] dollars, which it lent out as emergency loans to all the big names on Wall Street: Goldman Sachs, Morgan Stanley, huge banks like Citigroup and Bank of America. The Fed lent money to private equity firms, hedge funds, and even regular companies like Verizon, GE, and Harley Davidson.

And it wasn't just the recipients of that cash that were new. It was also what the Fed was requiring in return: the collateral.

In the past, in the rare instances that the Fed used its powers to serve as the lender of last resort, it demanded the highest quality collateral in return. Assets that were safe and would hold their value.

But in 2008, the Fed started accepting all sorts of…collateral that just months ago it never would have touched.

The sheer amount of new money that the Fed created was unprecedented. From the time we went off the gold standard of 1933 until 2008, the Fed had created a net total of $800 billion. In the months after the financial crisis, that number nearly tripled to almost $2.4 trillion.

[The Fed was] spending more newly created money in just 15 months than [it] had created in its entire history up until 2008.

And what effect did this fast-and-loose money-printing bonanza have? The big banks were able to recapitalize their damaged balance sheets while continuing to pay themselves record bonuses. Commodities, priced around the globe in U.S. dollars, became much more costly as many more dollars competed for the same amount of real assets. And financial assets, like stocks and bonds, marched upwards, raised by the unrelenting rising tide of Fed liquidity.

Notice however, that the economy itself did not fundamentally improve in the way the Fed had hoped it would. While a collapse of the system was averted (delayed?), economic growth has remained sluggish, unemployment high, and real wages stagnant or worse.

Of course, the reason for this is simple. Money is not wealth. It is merely a claim on wealth.

You can't print your way to prosperity. History is abundantly clear on that.

With the clarity of hindsight, it's now obvious how the Fed has now painted itself into a corner. Here's how the stock market has fared during the Fed's rescue efforts:

They say a picture is worth a thousand words. In this case, the picture above is worth several trillion dollars (some would argue as much as $9 trillion).

The financial markets have become dependent on new Fed dollars. If you look at the few gray segments of the chart, the stock market swoons nearly immediately once the Fed halts its balance-sheet expansion.

For whatever reason (perhaps because it's owned by banks?), the Federal Reserve has chosen to use the price of financial securities as the signaling device that its efforts are yielding results. But the markets, like any junkie, demand greater and more frequent infusions to reach new highs. Note how the trend of successive Fed programs yields smaller and shorter-lived boosts.

The Fed lives in fear of re-entering recession while unemployment and wealth inequality remain stubbornly elevated. With so many families teetering at the edge, things could get ugly very quickly if a fall in asset prices were to create a "reverse wealth effect" that triggered another recessionary slowdown. So as long as low single-digit GDP growth persists, the Fed's hands are tied. It must continue to print.

No matter that the rising price of financial assets grossly benefits the top classes – namely the 1% who own 40% of the entire nation's wealth. In stark contrast, the bottom 80% of Americans own only 7%.

The Fed has gone "all in" here. There is no Plan B.

Should We Place Our Faith in the Fed?

Perhaps the Fed has just the right talent and tools we need to finesse our way out of the challenges we face.

As for the talent, the key body that makes decisions on the money supply is the Federal Open Market Committee (FOMC). Many of its members have only had academic and/or government positions throughout their working careers. Voting members with actual business operating expertise, or experience running a commercial bank, for that matter, are rare.

And as for tools, the Fed only really has one: the interest rate. It can move it up or down. But the effects take time to be felt in the markets. And it is a blunt, imprecise tool, at best. Again from the Planet Money podcast, where interviewer Alex Blumberg is talking with Gerald O'Driscoll, former vice president of the Dallas Regional Federal Reserve:

Gerald O'Driscoll: I mean, it's okay to think about it that way. I winced a little when you said that, because the joystick presumes a very precise control, which is exactly what they don't have.

Gerald O'Driscoll: It's more like you're moving a super tanker and you start moving the wheel and there's no effect that you can see for quite a while.

In fact, the inner sanctum itself, where the all-important FOMC meetings takes place, seems much less like the rarified Olympian god-chamber we'd expect, and more like the conference room from Office Space:

Whatever you imagine the room looks like where you can create one and a quarter trillion dollars, this is not it. It is not grand. It is not ornate. It is not ceremonial. It has four grey cubicles, it has computer screens, and there's no other way to say this: It's a mess. There are papers and notes scattered around. There is a yoga ball someone has been sitting on. And there is a basketball net, possibly Nerf brand. This is where the magic happens.

The reality is, the Federal Reserve is like any other organization. Human. And fallible.

And like any other organization, it makes its best assessment of what the future holds and places its bets accordingly.

For those who want to argue that the Fed, with its cadre of hyper-degreed academics and its insider access, has superior information and thus the ability to predict the future with unparalleled accuracy; I humbly ask you to watch the following:

Cyprus: Are Things Different This Time?

In Hollywood, they say you're only as good as your last movie. By that metric, the Fed's latest sanguine prognostications should be taken with a huge amount of salt(ed popcorn):

Cyprus does not pose a threat to the U.S. economy or financial system and there are no signs of stock market bubble, Fed Chairman Ben Bernanke said on Tuesday.

The Fed chief told reporters that the central bank was monitoring the situation in Cyprus. "At this point, we're not seeing a major risk to the U.S. financial system or the U.S. economy," he said.

And while the cheap money supplied by the Fed has pushed up stock prices, Bernanke said the central bank isn't measuring the success of its policies against moves in stocks.

He also said the recent advance was not out of line with historical patterns. "I don't think it's all that surprising that the stock market would rise given that there has been increased optimism about the economy and…profit increases have been substantial," he said.

Sound familiar? Are you feeling comforted yet?

So, how much confidence can we really have in the Fed to navigate these yet uncharted monetary waters, with so many variables and unknowns, and its less-than-spot-on record? Honestly, we'd be fools to assume much.

Cyprus has awakened the world to the reality that central planners can appropriate their money with the bang of a gavel. And while we don't yet know with certainty how things will unfold in Cyprus, we can project that events there have shaken society's confidence in the soundness of fiat currency in general. If we know it can be confiscated or devalued overnight, we are less likely to unquestioningly accept its stated value. This doubt that strikes at the very foundation of modern monetary systems.

Cyprus is meaningful in the way that it shines a light on both the importance of hard assets and the risk it poses to market stability. It certainly increases the risk of our prediction of a 40%+ stock-market correction by Fall, as investors begin to realize that current high values are simply the ephemeral effect of too much money, instead of a sign of true value.

At this point, prudence suggests we prepare for the worst (by parking capital on the sidelines, investing in our personal resilience, etc.) and add to our hard asset holdings (like precious metals bullion, productive real estate, etc.) as insurance to protect our purchasing power. The dollar may strengthen for a bit versus other currencies and perhaps the financial markets, but the long-term trend is a safer and surer bet: Dollars will be inflated. There will be more of them in the future than there are today. So, while our dollars still have the purchasing power they do, we should use the window of time we have now to exchange paper money for tangible wealth at today's prices.

Those with a shorter time horizon, higher risk tolerance, and capital to spare may want to start considering a strategy for going short the financial markets.