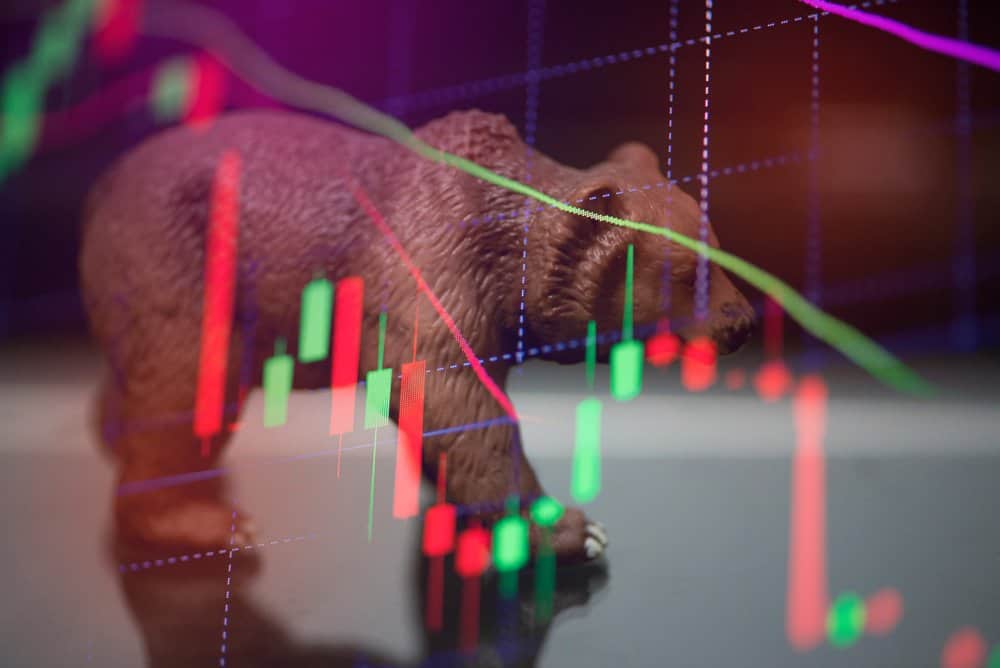 This week I’m going to lead off with the economic indicators – some of my favorites, including:

In the chart below, you can see the % change y/y for PPIACO – producer prices – remain at the “Nixon-1975” level.  That’s how bad things really are. 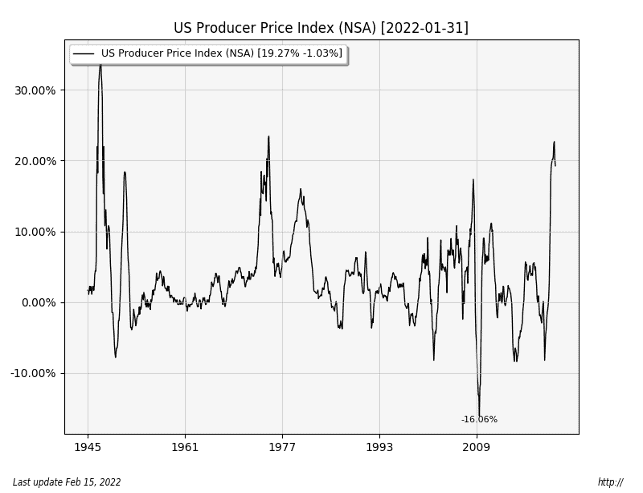 The 30-year mortgage rate (fred: MORTGAGE30US) is up +88 bp since Christmas, and +23 bp just this week alone. That’s a huge move. A bunch of bondholders – at least any bondholders who aren’t planning to hold for the next 30 years – just lost a ton of money.

The big move in the chart below means a bunch of bondholders lost a fair amount of money, at least on a mark-to-market basis. Big, short-term moves of this sort can lead to burps in the financial system.

If you want to understand more how bond prices move based on duration & interest rate changes – use the calculator here. 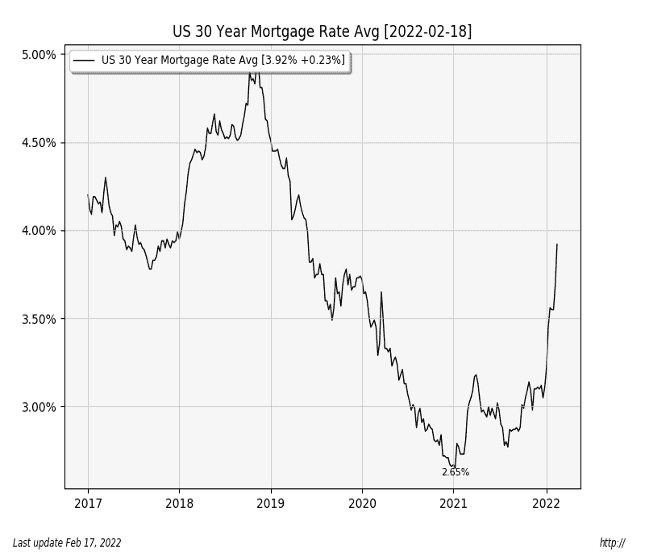 Crude hit a new 8-year high on Monday, fell fairly hard on Tuesday, then spent the rest of the week chopping sideways. Crude ended the week down -1.84 [-1.99%], closing at 90.49. Crude’s retreat this week was the first weekly loss in 9 weeks. If there is no “war” with Russia, crude will probably retrace.  Just a guess. I suspect it cracks 100 if any conflict breaks out. 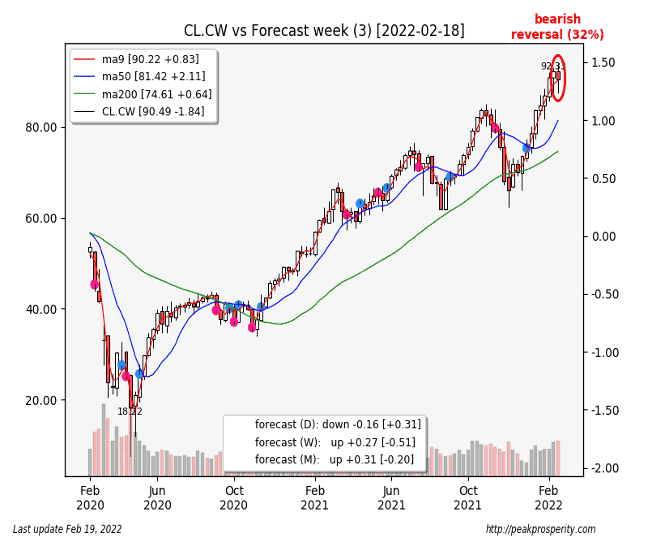 Equities moved lower also – after rallying for the first part of the week, SPX dropped on Thursday and Friday, ending the week down -69.77 [-1.58%], making a new daily low on Friday. The sector map was clearly bearish: energy led [-3.47%], along with Big Tech [-2.82%] and financials [-2.27%], while staples [+1.03%] did best.  You can see the ongoing sector rotation. Not all sectors lose when prices move lower – and some lose less than others. That’s why I watch the sector map. 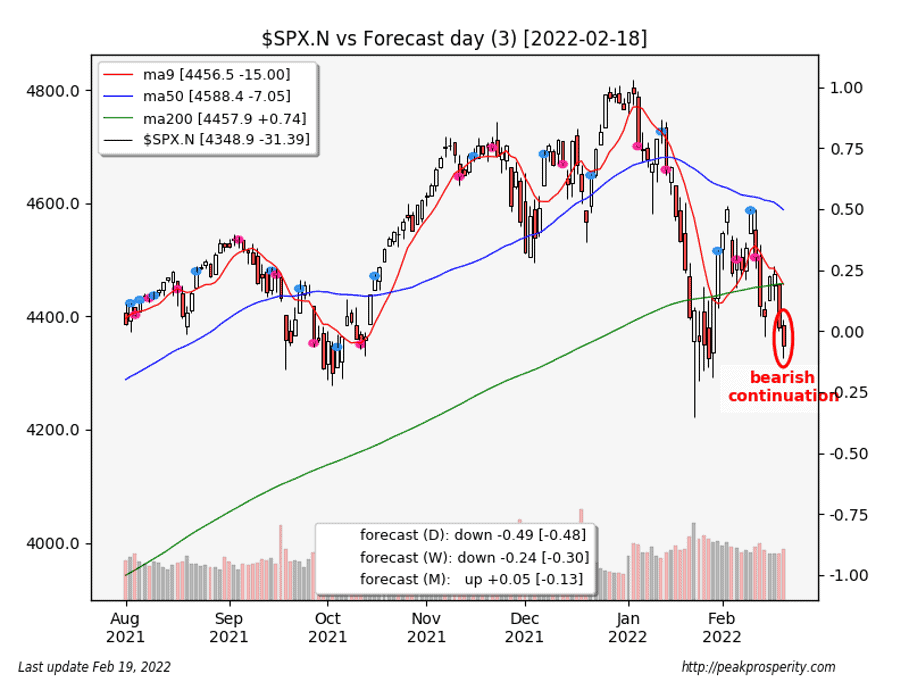 Here’s something you might not have seen before – margin debt vs SPX.  The FINRA series (red line) is a monthly series, and only gets reported 15 days after end of month. The banksters get to see this number in real time. Margin debt usually declines along with prices.  Sometimes it can be predictive, as it was at the end of 2018, and – perhaps – as it appears to have been in December, 2021. Last month margin debt fell, while prices chopped sideways.  Declining margin debt is bearish. “Less cash is available to buy equities.” 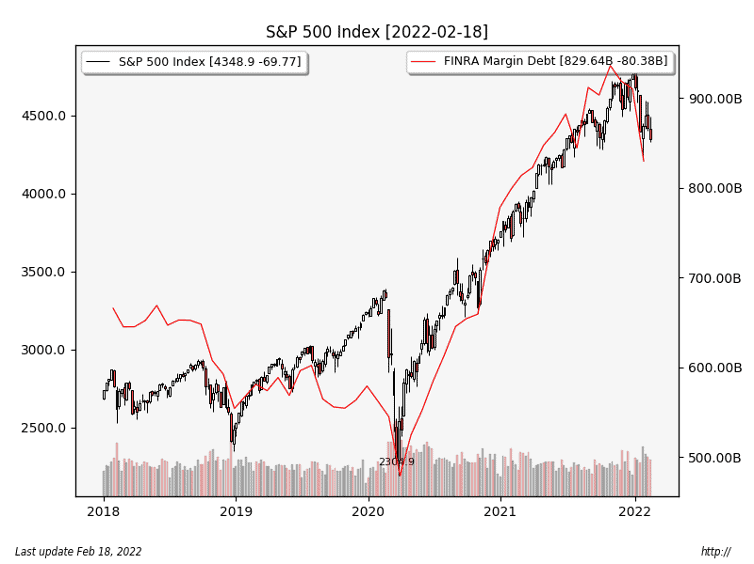 Gold broke out to a new 9-month high this week, closing up +40.61 [+2.18%] to 1902.18. Closing above round number 1900 was a very positive sign. However, this does not look like a bullish move for PM – it is more of a safe haven move. Silver rose just +1.44%, and while GDX jumped +6.38%, GDXJ rose just +3.24%.  In a bull PM move, silver outperforms gold, and the junior miners outperform the senior miners.  When gold outperforms silver, and GDX outperforms GDXJ, that’s usually a “safe haven” move. Safe haven moves have this irritating tendency to unwind when the “safety” issue recedes. 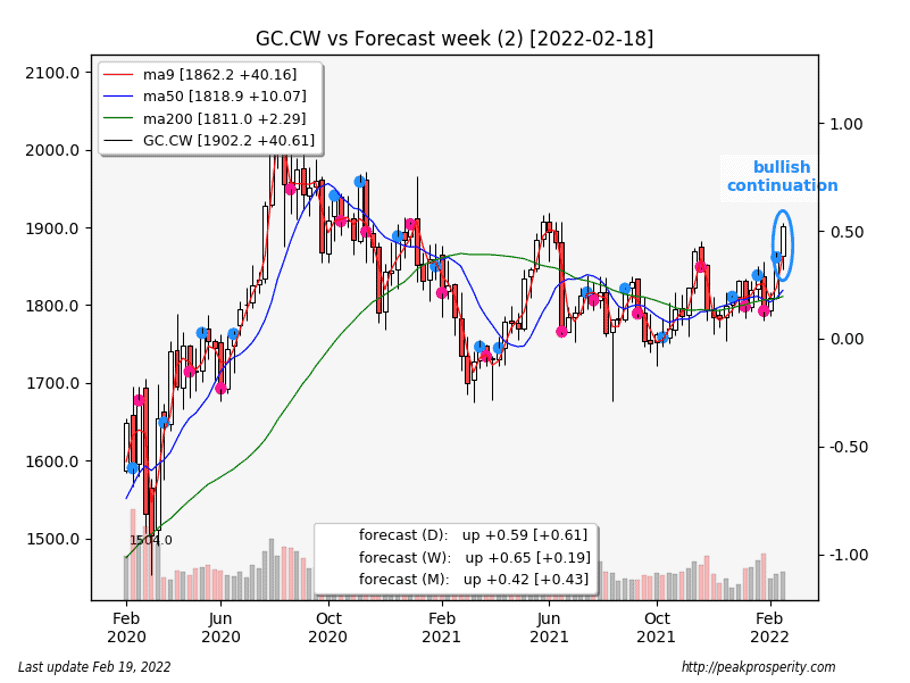 My “war with RUSSIA!” indicator – palladium – did move higher, up +1.67%, but it failed to make a new closing high, or even a new intraday high for this “invasion” cycle. However, since palladium remains in an uptrend, the chances of a Wag The Dog conflict (paid for by You and Me), remain at least moderate. 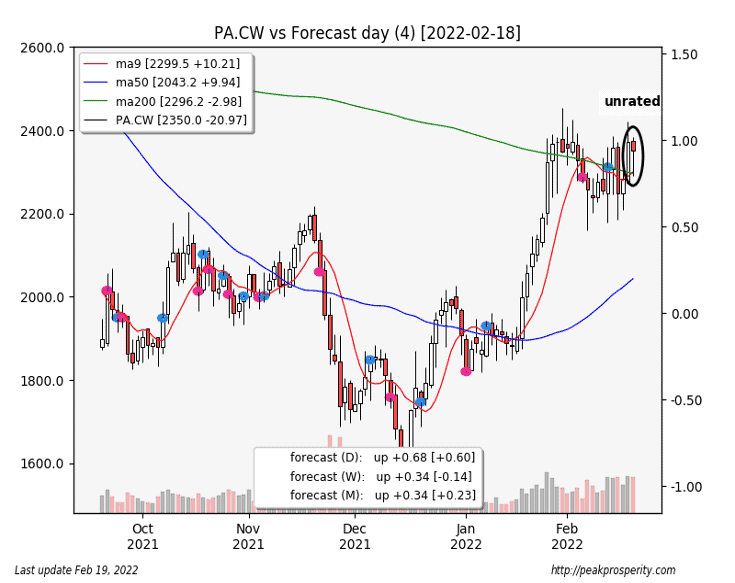 The News That Caught My Eye

Harris faces the most critical foreign trip of her vice presidency

Why, oh why is Biden sending Kamala Harris to stop Putin invading Ukraine?

Option 1) They want a war to start.  The Biden-Handlers need this Wag-the-Dog-War desperately; our inappropriately-giggly VP is just the person to bring it home.

How is royal outcast Andrew paying for £12m deal?

Curious timing on yet ANOTHER in-prison hanging. It’s almost as if they can kill people at will.

Both of these events keep Epstein’s laboriously-compromised targets in play.

Sens. Richard Burr (R-N.C.), Lindsey Graham (R-S.C.), Jim Inhofe (R-Okla.), and Mitt Romney (R-Utah) were not present when the Senate voted on Lee’s amendment and two other proposals to alter the funding bill.

It turns out that Clinton and her top foreign policy advisor, Jake Sullivan, spread a bogus Trump-Russia “collusion” narrative. To enable this Soviet-style disinformation campaign, Clinton’s 2016 presidential campaign hired a tech firm to “infiltrate” servers at Trump Tower in Manhattan and at the White House in order to link Donald Trump to Russia.

Did someone just say to Hillary: “No Presidency For You?”  If so – then who?

The timing of this Durham release is not an accident. When things operate at this level, there are no accidents.

This is why the WEF wants to “defund the police” here in the US – which is really all about federalizing police. It’s much easier to shoot unarmed civilians if you don’t have to live there. “They aren’t my friends, after all.”

Intel buys Tower Semiconductor for $5.4 billion so it can make more chips for other companies

Intel has made no bones about its plans to rapidly ramp up production capabilities, with recent news of a $20 billion investment to expand its existing Arizona manufacturing facilities, along with a second $20 billion bet to build an entirely new complex in Ohio that it claims will be the “largest silicon manufacturing location on the planet.”

Liberal school board gets a lesson in pandemic politics

It’s time to start ‘inching’ toward normalcy, Fauci says; 73% of Americans may be immune to omicron: Live COVID-19 updates

In the lawsuit filed Tuesday, the Saget family seeks to stop the release of further details about his death at a Florida hotel and keep the investigation confidential as it “would cause irreparable harm in the form of extreme mental pain, anguish, and emotional distress.”

Normalizing Heart Attacks and Blood Clots for Everything BUT The JAB

Word of the day: gaslighting.

But it won’t work forever.

The (proposed) WEF Justice System: if you shoot at the right people, you get bailed out of jail almost immediately.  If you peacefully protest medico-fascism, your bank accounts get frozen, as do those of your friends!

A glimpse of our future, should we choose to accept it.

History not only rhymes – sometimes, it even repeats. Or at least it tries to anyway.

Regarding the PFE/MRNA story: the FDA data will be coming out, near term. The timing on that is bounded.  Money will likely move in anticipation of the data-dump event. There will also (probably) be redaction fights as well, but the Trump-appointed judge appears to be a stickler for transparency. They must not have anything on him.

Regarding the sovereign default story: Armstrong has maintained for years that money will move from “public” (sovereign debt) into “private” (equities and corporate debt) as a consequence of the well-earned collapse in confidence in government. Why? When a company defaults, there is a settlement; things get sold, and the bondholders get something. When a sovereign defaults, you get nothing at all.

So why can’t the Fed print its way out, like it has done for a decade?  Things are different this time.  Inflation hardly moved after 2008.  Contrast with today: PPIACO is at +19% y/y – a 40 year high – and oil is in shortage. There is no “printing your way out” this time around – unless they want inflation to scream even higher. They are between a rock & a hard place. Inflation = the Oligarchy Party loses power, guaranteed. So, what do they do?

My guess: raise rates, cook up a “war” distraction, and punish anyone criticizing the government as a “domestic terrorist.”  Maybe add in “climate change lockdowns” too, just for fun. Say after a big storm hits. A “climate change emergency” declaration.

This, happening at the same time as peak oil. 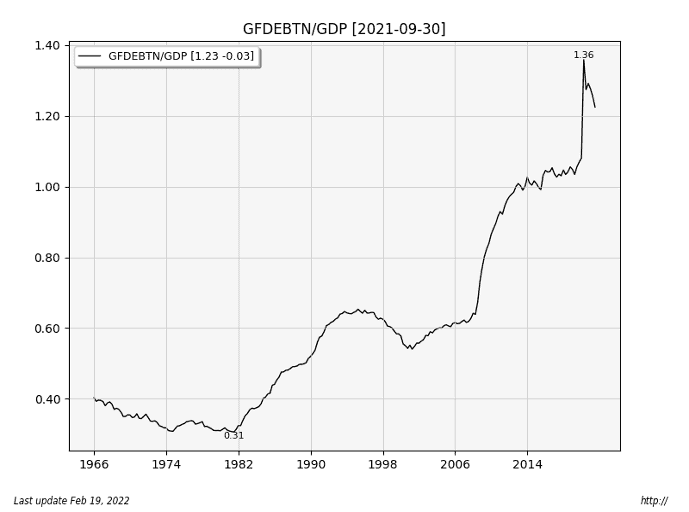