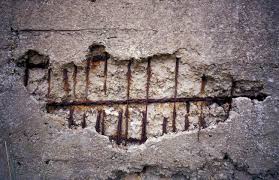 Our Future Is (Literally) Crumbling Before Our Eyes

Our Future Is (Literally) Crumbling Before Our Eyes

The sorts of predicaments the world faces — ranging from over $200 trillion in debt, to our unsustainable addiction to fossil fuels, to our over-stressed ecosystems — all require that we get deadly serious about confronting them ASAP, and make difficult decisions and trade-offs.

However, our global leaders always seem to opt to kick the can down the road if at all possible. Short-term thinking and near-term priorities dependably get precedence over doing the right thing for the future. Tomorrow’s generations are thrown under the bus by selfishly motivated actors today.

As I’ve put forth over and over again: we’re simply not going to make it unless we get much more serious about our efforts than we have been to date. Yes, it’s a wonderful thing that Elon Musk is building sexy electric cars; but even a single minute spent with a pencil, paper and the aggregate energy statistics on transportation will reveal that there’s an enormous gap between where we currently are and where we need to be.

Most will never spend that minute; which is why I continue to do what I do.

For example, many people wave their arms lazily at the statistics for wind-generated electricity and never bother to ask if its current growth rates can be sustained. Or wonder just how tremendously massive the scale of the effort will need to be to meet any realistic sustainability goals.

In a prior companion piece to this article, I quoted a study which determined that to simply meet the wind power goal put forth in the recent Paris accord, the world would have to massively upshift from installing 37 wind towers per day currently to more than 1,300 per day by 2028.

Can we do that? Maybe. But not without a maniacal commitment to making it happen. And that’s the thing: the world is instead hoping that somehow ‘the market’ will deliver sufficient wind power in time. Given the state of the global financial system — with its more than $200 trillion(!) in debt — is that really something we want to leave to hope?

But leaving the economic and political issues of that challenge aside, I’d like us to focus on the more practical issues of the energy investment required to build out a new energy infrastructure, not to mention the longevity and durability of the components we'd be installing.

I’ve always found this time-lapse video of a single wind tower installation mesmerizing. The skill on display is amazing:

Here’s a brief summary for those of you too busy to watch this construction process right now: Diesel, diesel, diesel, reinforced concrete, diesel, petroleum, diesel.  That is, installing a wind tower like this requires a huge amount of fossil fuels to accomplish.

To focus in further, watch from the 45-second mark to one minute.  What you’ll see there is 96,000 pounds of reinforcing steel, and 53 cement trucks used to pour the windmill's base.

This article does a wonderful job of laying out what I mean:

The problem with reinforced concrete

By itself, concrete is a very durable construction material. The magnificent Pantheon in Rome, the world’s largest unreinforced concrete dome, is in excellent condition after nearly 1,900 years.

Given the survival of ancient structures, this may seem curious. The critical difference is the modern use of steel reinforcement, known as rebar, concealed within the concrete. Steel is made mainly of iron, and one of iron’s unalterable properties is that it rusts. This ruins the durability of concrete structures in ways that are difficult to detect and costly to repair.

While repair may be justified to preserve the architectural legacy of iconic 20th-century buildings, such as those designed by reinforced concrete users like Frank Lloyd Wright, it is questionable whether this will be affordable or desirable for the vast majority of structures. The writer Robert Courland, in his book Concrete Planet, estimates that repair and rebuilding costs of concrete infrastructure, just in the United States, will be in the trillions of dollars – to be paid by future generations.

Steel reinforcement was a dramatic innovation of the 19th century. The steel bars add strength, allowing the creation of long, cantilevered structures and thinner, less-supported slabs. It speeds up construction times, because less concrete is required to pour such slabs.

These qualities, pushed by assertive and sometimes duplicitous promotion by the concrete industry in the early 20th century, led to its massive popularity.

Reinforced concrete competes against more durable building technologies, like steel frame or traditional bricks and mortar. Around the world, it has replaced environmentally sensitive, low-carbon options like mud brick and rammed earth – historical practices that may also be more durable.

Building codes and policies generally require buildings to survive for several decades, but deterioration can begin in as little as 10 years.

The main issue is simple: putting in steel reinforcing bars lowers the cost and weight of installing reinforced concrete, but at the severe expense of reducing the lifespan of that concrete — from millennia to perhaps a hundred years, and sometimes far less.

Steel corrodes (rusts). When it does, it expands and leads to something you’ve seen but perhaps not recognized: concrete cancer. 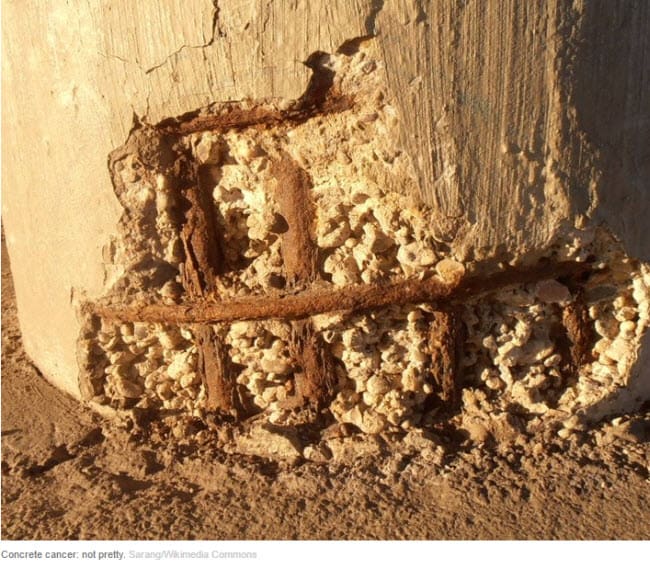 In every single reinforced concrete structure, silently behind the smooth exterior, the concrete is breaking itself apart due to the corroding steel inside.

What all this means is that literally everything you see today that’s made of concrete will need to be replaced within a hundred years of its installation.  Every bridge, every building, every roadway…all of them.

They’re just rotting away from the inside, silently and relentlessly.  When the rot progresses far enough, it leads to something called ‘spalling’, which is when the surface of the concrete crumbles away to reveal the rusted steel beneath.

Once you notice this, you’ll see it everywhere: 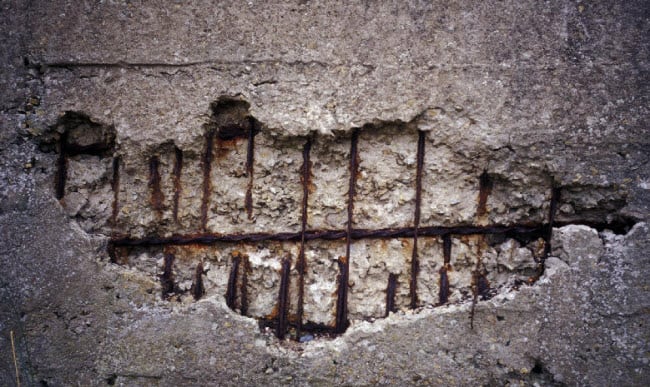 Of course, it’s true that anything you build will erode over time and require maintenance and care to provide longevity. The problem with reinforced concrete is that it’s extremely difficult to remedy once it’s poured because the affected parts are inside and hard to access.

So it’s nearly universally true that everything poured from concrete over the past century, as well as most of what is still being poured today, is fated to have a very short, very disposable lifespan.

So let’s travel forward just a few short years into the future. There we find hundreds of trillions of dollars more of global debt, even greater sums of unfunded liabilities, much more expensive fossil fuels (as explained in this recent podcast with Art Berman) — all competing with a crumbling concrete-built environment that will have to be torn down and replaced.

Where the article above concludes that trillions of dollars will need to be be spent just in the US alone to replace its concrete infrastructure, that number will be at least an order of magnitude higher for the entire globe.

And we don’t get much incremental benefit for the cost of replacing a crumbing piece of infrastructure. When you tear down a bridge and replace it you still have one bridge performing the services of one bridge. Sure, you occupy a number of people in the construction and manufacturing trades for a while, but you don’t get any added value beyond that. It’s not the same as putting in a new bridge at a new location to open up a new geographic area for greater economic activity.

You just get your bridge replaced.  One for one: an economically neutral exchange that costs a lot of money.

My larger question here is this: Can all the competing future demands even allow all of the current concrete infrastructure to simply be replaced, let alone expanded?

What if there’s not enough energy for that task, plus the demands of feeding and sheltering and defending ourselves?

It's my strong belief that we’ll regret the short-term mentality that led us to trade durability for lower cost. Furthermore, I contend that competing future demands will prevent us from replacing all of our decaying infrastructure with similar copies.

Either they won’t be replaced at all because we cannot afford to do so (see: Detroit) or we'll have to bite the bullet and begin installing truly durable structures that won’t simply tear themselves apart from the inside in a few short decades. Which will likely be a lot more expensive to build.

Hopefully I’ve opened your eyes to the folly of building our society atop a foundation with an expiration date.

Reinforced concrete structures are crumbling all around us, something that's immediately obvious once you begin to look for it for yourself. In most cases, it isn't poor construction practices that are to blame, but simple chemistry and the decision to use steel as a reinforcing agent. The very best construction company in the world will still see their efforts end in ‘concrete cancer’ sooner or later.

There are some newer ways of slowing or mitigating this effect, but those aren't always used. In my observation, more often than not they're simply not deployed.  Steel is laid down, usually with rust already showing upon it, and then the concrete is poured over it. And that’s that.

Perhaps that tragedy will be many years in the future. But its inevitability is assured.

If we were thinking about all of this clearly, we’d not be pouring wind tower bases using reinforced concrete. Instead, we'd build pads that would be durable for centuries, because presumably we’re investing in wind power for the very, very long haul.

In the end, isn’t there something terribly ironic about making a future-betting ‘investment’ in wind upon a base of reinforced concrete that is, by definition, destined for a short, disposable life?

That alone says much about just how un-serious we really are. And how out of integrity our actions are with the very premise of sustainability.