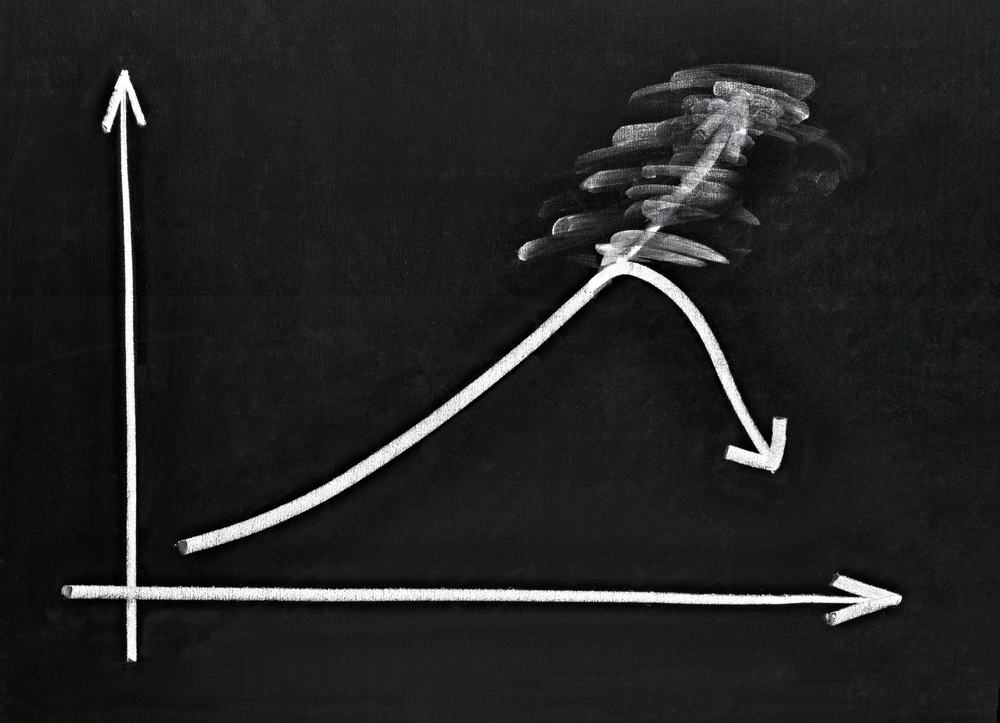 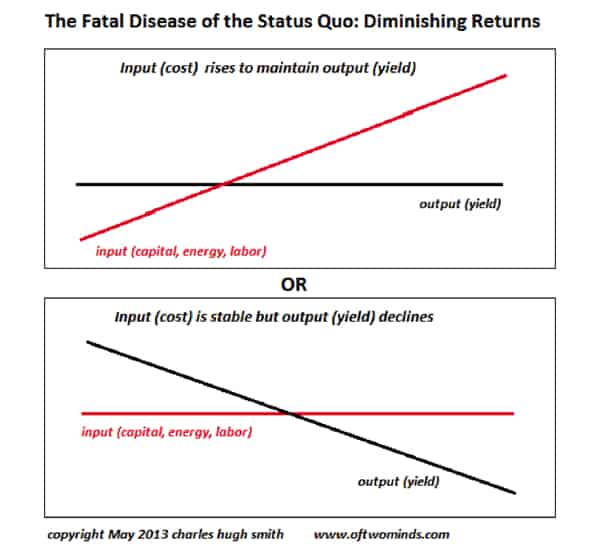 Studying is one common example of diminishing returns. When we’re fresh, we learn a great deal from intense study. As our energy and concentration flag, the return on the effort of studying declines until it reaches near-zero. We find ourselves re-reading the same line again and again, and basic errors pile up in our work.

While it is tempting to identify a political, emotional, or economic factor as the root cause of our structural troubles—human greed, poor enforcement of regulations, Federal Reserve policies, etc.—I think a compelling case can be made that the one dynamic that ties all the other causal factors together is diminishing returns.

Diminishing Returns and the S-Curve

The key driver of diminishing returns is easy to understand. We naturally continue to do more of what was successful in the past. As the returns decline, we redouble our efforts, confident that what worked in the past will once again be successful if only we invest more labor, energy, and capital.

Financialization—relying on expanding debt, leverage and the packaging of debt for growth—pays handsome returns in the early stages of the process. But returns on expanding debt diminish as the low-hanging fruit are plucked and credit expands to buy low-yield, high-risk investments.  Returns also decline as rising interest payments on all of the accumulating debt eat away at yields.

Eventually, returns decline to zero or even negative territory, and doing more of what worked well in the past fails in a spectacular fashion. 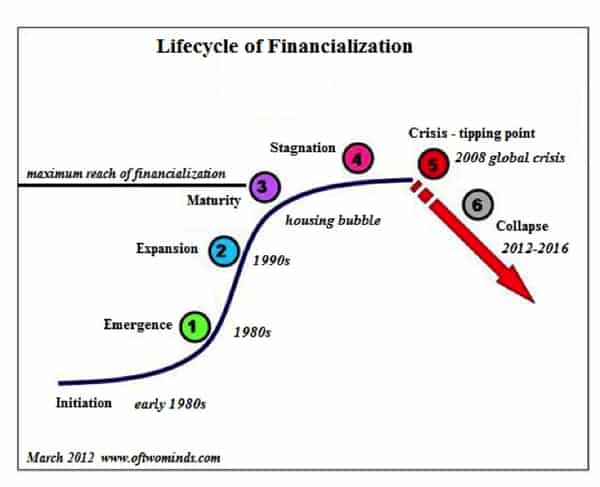 We can see this same dynamic in this chart of household debt and earnings: The expansion of debt was paralleled by rising earnings until the late 1990s. After that, household earnings continued rising, but the rate of growth was outstripped by debt, which more than doubled from 2000 to 2008.

In other words, adding debt yielded diminishing returns in terms of household income. 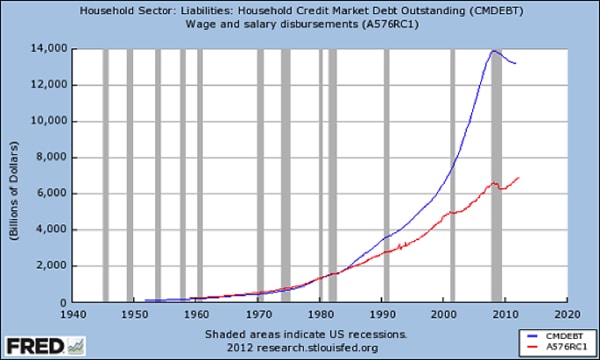 Efforts to reduce debt (i.e., deleveraging) have barely moved the needle, as shown on this chart of total debt per capita (per person) in the U.S. 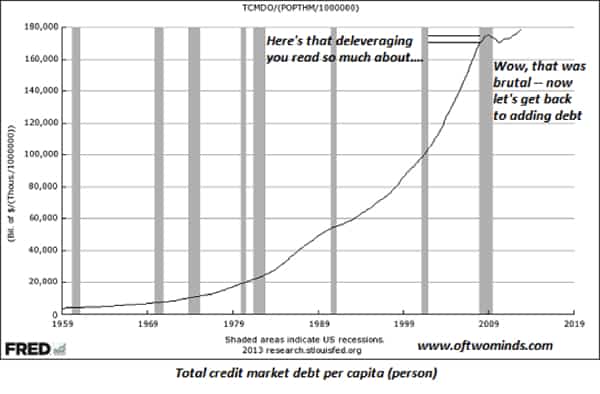 The S-Curve helps us understand the tendency to respond to diminishing returns by redoubling what worked in the past. For example, if regulating the financial sector worked in the past, then let’s do more of it. Thus the Glass-Steagall Act, at 37 pages in length, was the inspiration for the 2,319-page Dodd-Frank Wall Street Reform and Consumer Protection Act.

Higher education offers another example. While costs have skyrocketed 1100% since 1980, the yield on that investment has declined.  A recent major study, Academically Adrift: Limited Learning on College Campuses, concluded that "American higher education is characterized by limited or no learning for a large proportion of students."

While student loans have soared to over $1 trillion, with direct Federal loans ballooning from $115 billion to $674 billion in a few short years, only 37% of freshmen at four-year colleges graduate in four years (58% finally graduate in six years), and 53% of recent college graduates under the age of 25 are unemployed or doing work they could have done without going to college. 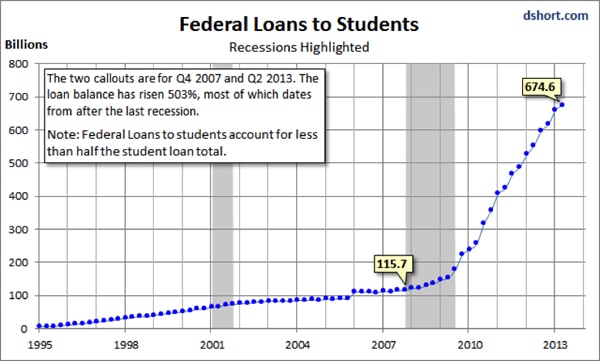 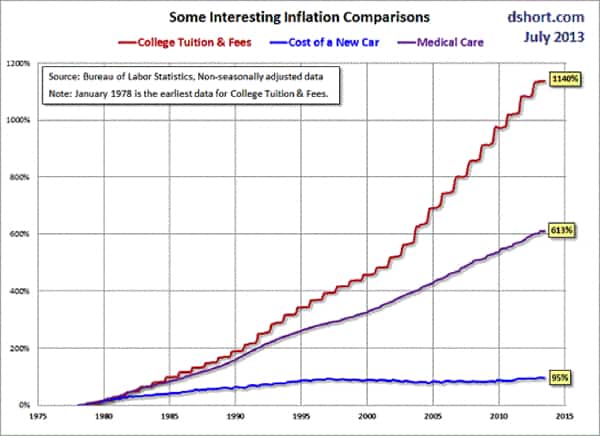 Housing offers yet another example of diminishing returns. While the Federal Reserve has pulled out the stops to boost housing by lowering interest and mortgage rates to historic lows and taking the unprecedented step of buying over $1 trillion in mortgages, housing valuations remain far below their bubble levels. 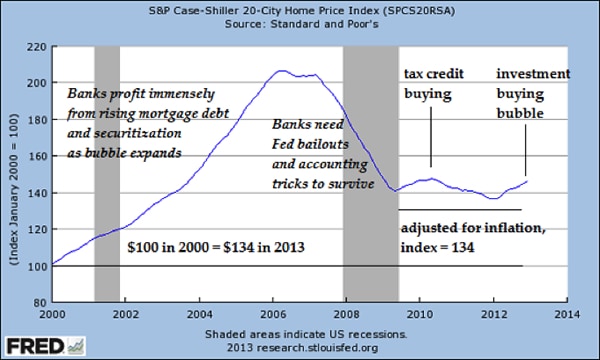 The $1 trillion F-35 Lightning fighter aircraft program is an excellent illustration of the dynamic. Despite claims by the contractor to the contrary, numerous reports of fundamental inadequacies continue to surface even as delays and cost-overruns have driven the fly-away cost of each fighter to over $200 million each. http://defenseissues.wordpress.com/2013/09/28/actual-f-35-unit-cost/

Though some published reports assign a cost of $110 million each to the F-35, this grossly understates the true cost, as the research and development costs were paid separately. These might run as high as $50 million per aircraft, if the number purchased globally declines. (Even more absurdly, some published prices for the F-35 neglect to include the engine, which adds $34 million.)

By comparison, the previous top-line U.S. aircraft, the F-18 Super Hornet, costs $57 million each. In the view of many defense analysts, the F-35 is decidedly inferior to the aircraft it is replacing.

We might expect that an aircraft that costs almost four times more would be four times more capable than the previous generation. Instead, the complexity of the aircraft is yielding such severely diminishing returns that the new aircraft may prove less capable than upgraded F-18 Super Hornets in real-world air-to-air combat and bombing missions.

Continuing to do more of what was successful in the initial high-return phase of the S-Curve ends up failing spectacularly when it is applied in the topping phase of the S-Curve: More energy, effort, and capital must be expended just to keep the yield from dropping into negative territory. This is not a static dynamic; as yields plummet, defenders of the status quo divert an ever-increasing share of the national income to feed their diminishing-return sacred cows.

Three other factors motivate this devotion to systems beset with diminishing returns: sunk costs, institutional culture, and peer pressure. Sunk costs are the investment plowed into the system over the previous decades that cannot be recovered; abandoning these assets goes against the grain.

Every institution has a culture built over time of procedures and priorities. Abandoning diminishing-return programs typically requires radically transforming (or jettisoning) the institution’s existing organizational order. From the perspective of those inside the institution, such a radical change looks like a potentially costly gamble; the lower-risk strategy is to do whatever it takes to maintain the existing order.

Though we may dismiss peer pressure as a teen-era phenomenon, it is just as powerful in adult circles. Anyone pointing out diminishing returns within an organization risks being sacrificed as the messenger of unwelcome news: shunned, demoted, or discredited. There are too many masses of inertia and too many people with stakes in the current system to welcome radical changes and potentially risky attempts at transformation.

The Accelerating Costs of Diminishing Returns

This default diversion of treasure to support diminishing returns has two costs: the opportunity costs of what else did not get financed because available resources were poured down the rat hole of failing programs, and the largely hidden increase in systemic fragility as productive investments are starved by the diversion of resources to the rat holes of diminishing returns.

This dynamic leads to the final phase of doing more of what has failed spectacularly.

In Part II: How to Overcome Diminishing Returns, we examine the inner workings of diminishing returns and consider strategies to avoid being ensnared in diminishing-return systems.