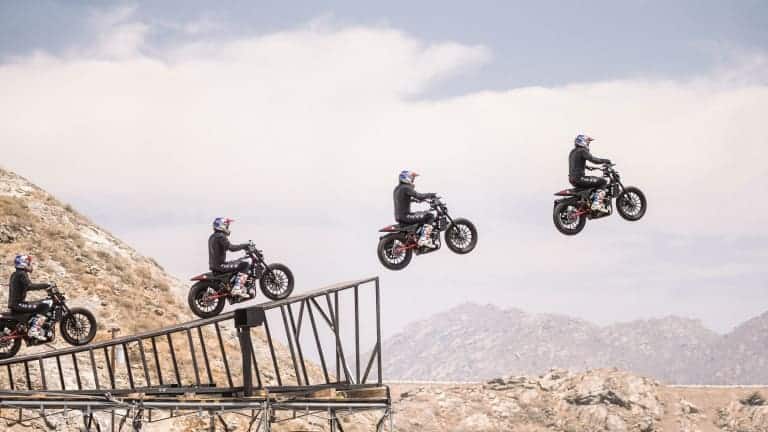 It’s The Pace Of Change That Kills You

It’s The Pace Of Change That Kills You

In Part 1 of this article, author Chris Martenson describes how the accelerated pace of recent economic and ecological challenges is overwhelming our ability to deal with them. In Part 2, ALERT: Time To Relocate (premium content), he describes the factors compelling him to leave his community of 15+ years and lays out his relocation criteria.

A treasured member of my family is in the process of dying right now. She has lived a full, rich life; but her passing is a sad affair for us.

I’ve spent a lot of time recently with hospice workers. I’ve learned that they’re often asked by their patients, “How much time do I have left?”

While sometimes loathe to offer an answer, hospice staff can predict the timing of the end pretty accurately.

They do so by measuring by the changes they see. Or, more accurately, the pace of change in those changes.

Could a patient pick a book up off the floor in June, but not in July? If not, then their remaining time is likely to be measured in months.

Could they raise themselves out of a chair last week but not today? If not, then it may be only weeks until the end.

Are they losing function every day? Then death is likely just days away.

And so on, right through hours, minutes and seconds.

Both provide critical information about what’s going on, but it’s the pace that informs our timing predictions.

This is equally true for larger systems like economies and ecosystems.

Ecological Volatility: The Pace Is Accelerating All Around Us

Losing a certain population of a given species over a million years is a very different proposition from losing the same number within just 40 years. Or even yearly, as now appears to be the case.

Dorian was absolutely brutal to the Bahamas; the damage was unprecedented and extreme. I simply cannot imagine the sustained horror of being pinned down by a Cat 5 for 36 hours as it brutally dismantled my home.

Like slow-moving Hurricane Harvey (not a Cat 5, but hugely damaging) Dorian just parked itself over the Bahamas and laid waste to all that lay beneath, churning like a massive blender.

Are monster storms that move slowly a new meteorological trend? Or has it simply been ‘bad luck’ to experience so many of late?

We don’t know yet. But there have only been 35 Cat 5 hurricanes in the past 100 years. However, at our current pace, there will be 125 such storms over the next century. That’s four times as many vs the past.

Financially, the latest and most head-spinning change concerns the explosive proliferation of debts with negative interest rates.

Unheard of since the Mesopotamian invention of debt in 2,400 BC, negative interest rates have suddenly appeared on the financial landscape like a new mutant species, an invader without natural predators, gaining a sudden foothold and then spreading rapidly.

It’s as if a virulent chestnut blight landed in a virgin forest of corporate and sovereign debt.

From literally ‘none’ ten years ago, to more than $17 trillion now. And up from a ‘mere’ $6 trillion in the past ten months alone:

Is this a new, permanent trend?  We don’t know yet.

But the pace of change is sure intensifying.

First, Switzerland gave negative rates a tentative go. Then Denmark timidly followed. But eventually, the entire Euro complex followed with gusto, with most countries’ rates crossing below the 0%-boundary in late 2014: 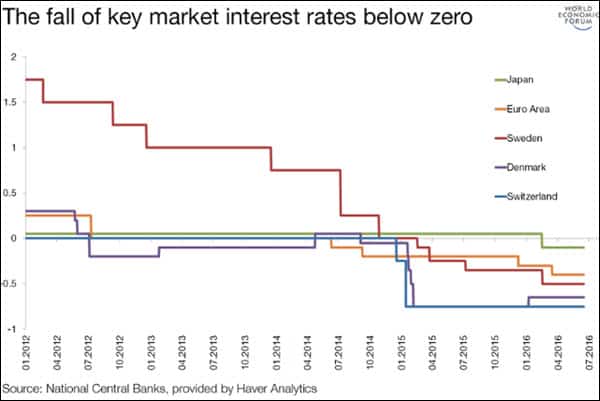 Whatever the final repercussions are, one fact is clear: the world’s central banks are completely, 100% responsible for these bizarro-world negative interest rates.

They try to pretend that the $20+ trillion money printing spree they engineered after 2008 isn’t a root cause. Instead, they claim “the markets” are responsible. But this is as weak a defense as Ted Bundy claiming his victims all killed themselves. It’s just not a credible defense.

Emboldened by seeing that nothing terribly bad happened in the early years of negative rates, the ECB went on an absolute tear of a printing spree in 2016 and 2017. It went so far as to buy corporate debt via private placement, meaning that the debt was never issued to the bond market. The ECB just conjured up the necessary billions of euros and directly credited corporate accounts while taking their bonds onto its books.

Again, it’s worth noting just how unusual this all is. It has never been done before.

5,000 years of accumulated knowledge is being chucked out the window by activist central bankers who assume they know best.

But do they?  And what will be the repercussions if they don’t?

The financial media is working very, very hard to defuse concerns about negative rates and sell them as a talisman against anything that could hurt the economy.

They dutifully scribe down what the central bankers say, and then pitch it to us as gospel.

Instead, I propose that now is the time to ask stiff questions of the central bankers, and to not let them avoid answering. And to keep asking until we either receive reasonable responses, or clarify that they have no good answers to give.

Here are questions I would love to hear posed to Chairmen Powell, Draghi or Kuroda:

We deserve to know the answers to these — and a dozen other — questions. Why nobody in the press or Congress is asking any of them is a different story for another day.

While it’s possible that central bankers are competent, benevolent experts doing their best, it’s equally possible they are the largest economic and social vandals in all of history.

Given that possibility, the Overton Window really needs to be smashed wider, and quickly, so that we can get answers to those ‘impolite’ but necessary questions above. If it turns out that the central bankers have thoughtful, intelligent responses to them, then fine. We can debate the assumptions and data.

If, on the other hand, they get snippy and affronted by being challenged, then it will mean they have no good answers. It will unveil that they’re merely ‘winging it’ when literally everything is on the line.

It will mean, for the sake of ease and expediency, they’re basically dismantling a cultural heritage site as they scavenge for handy building materials. Turning architectural splendors into crude stone huts.

In other words, they’d be unmasked as economic and social vandals. Wrecking the infrastructure of financial knowledge and thousands of years of cultural arrangements simply because they are too intellectually lazy or too emotionally weak to do otherwise.

We Have To Be Our Own Rescuers

The Powers That Be, like central bankers and politicians, are just humans. They err. They have to operate with imperfect information.

But they are also mostly untrained in systems thinking, resource limits, and other such necessary fields — which they could correct for if they cared or dared.

But they aren’t. And because of this, the pace and the scope of the changes happening are beyond their powers of comprehension, let alone their powers to fix.

So many things are changing. And the rate of change is speeding up, too. It’s barely possible to fashion a comprehensive plan for what to do about it. It’s probably too much to expect that anyone in power would have the necessary broad-based systems thinking required to concoct a reasonable plan forward.

Someday we’ll begin to run out of fossil fuels, and we have no plan for that. We haven’t a clue what to do about the rapidly intensifying weather. Nobody knows how we’re going to grow enough food for 9 billion people when the phosphate runs out.

But instead of planning for these certain challenges, what are our leaders doing instead?

The central bankers are continuing to lower interest rates. Politicians squabble about marginal, ultimately unimportant distractions. And universities enforce spaces safe from micro-aggressions so that nobody is ever offended (leaving them woefully unprepared for what’s coming next).

Everybody is still busy doing the very same things that have moved us away from what has served us well for 5,000 years: positive interest rates and a stable climate.

The rate of change is accelerating. Things are speeding up. That’s how exponential systems behave. It’s not surprising to those who understanding it, but it’s shocking to behold.

It’s dead simple at this point to conclude that we’re on course for a massive financial accident. And a major ecological upheaval that will make it difficult, if not impossible, to feed everyone, too.

If we don’t change direction, dramatically and soon, those eventualities are about as close to guaranteed outcomes as you can get.

Will society make the necessary change in time? I doubt it. Don’t you?

Our signposts along the way for timing the arrival of the next crisis will come from closely tracking the pace of change in developments from here.

And for me, recent events have accelerated to the point that I’m no longer comfortable residing in my current location.

In Part 2, ALERT: Time To Relocate, I explain the factors compelling me to leave my community of 15+ years for a safer, more resilient and liberty-respecting location. And I share the qualities I’ve prioritized highest when evaluating the new property to relocate to.

Those who have followed me for years know that I very rarely issue Alerts. I only do so when I arrive at important conclusions that cause me to take major action in my own life.

The pace of change in world developments is now high enough for me to undertake big life change like this.

How about for you?