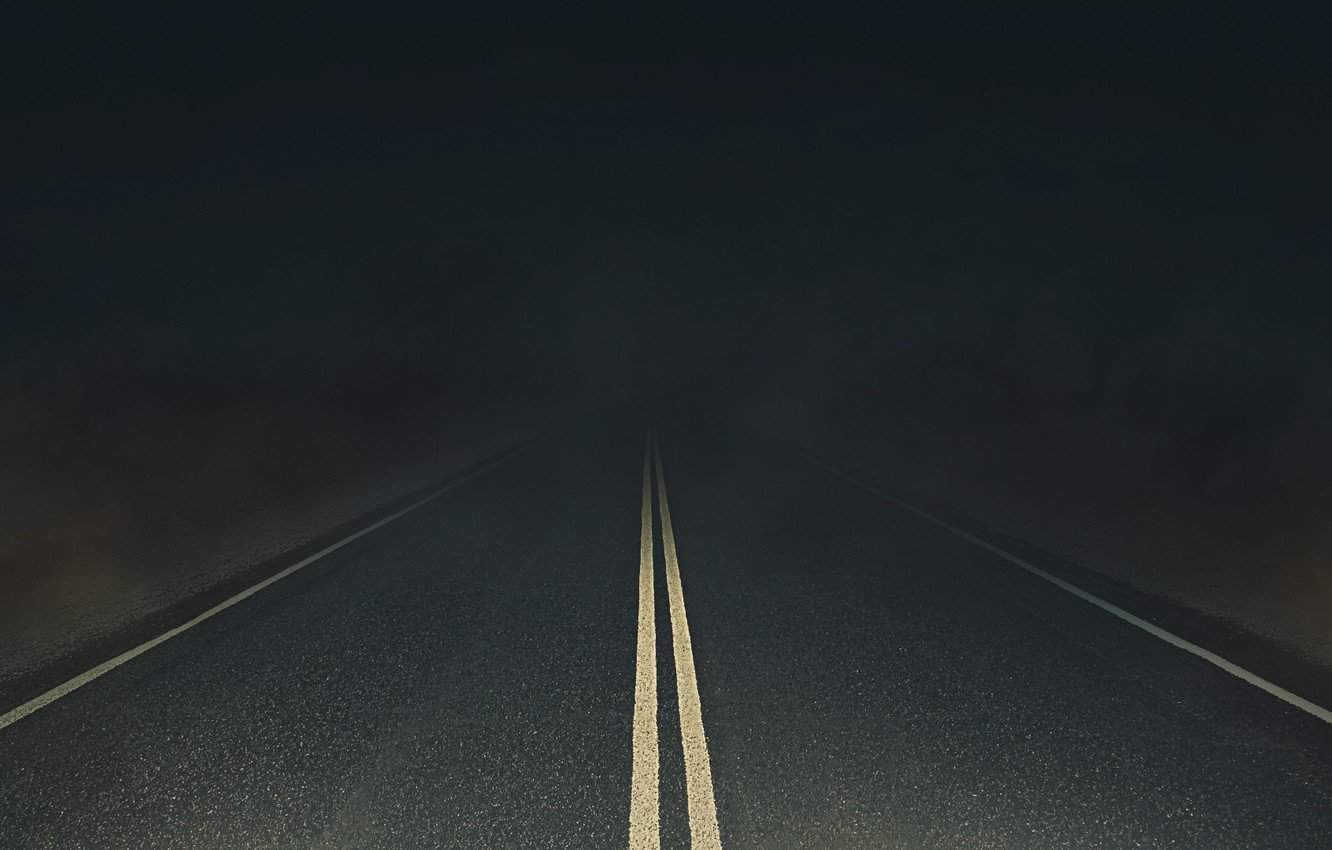 Into Darkness: Where The Fed Is Leading Us

Into Darkness: Where The Fed Is Leading Us

As you may know, I was one of the very first voices publicly reporting on Covid-19, issuing an alert that the virus was a significant pandemic event on Jan 23rd, 2020.

This was long before most media outlets even managed to write their first “It’s just the flu, bro!” article.

Using the same logic and scientific methodology I was trained in as a PhD, I was able to “predict” things well in advance of nearly every official or mainstream news source.

I’m using quotation marks around the word  “predict” because it’s not really a prediction when you’re just extrapolating trends that are already underway.

Just as it’s not really a “prediction” to estimate where a thrown pitch will travel, it wasn’t much of a prediction to state that a novel virus with an R-Naught (R0) of well over 3 would be extremely difficult to contain once it arrived in a country.  Note that I didn’t say impossible — South Korea, Australia, New Zealand, Thailand, Taiwan and Vietnam all get high marks for containment — but certainly difficult.

The US and the UK proved this in spades, as they’re both led by below-average ‘managers’ rather than leaders.

Leaders make tough decisions based on imperfect information.  Managers dither and hedge and only make up their minds after the facts are already in and events well underway.  Naturally, the US/UK managers were simply no match for the exponential rate that the Honey Badger Virus (aka Covid-19) spreads at.

I call it the Honey Badger virus because of its incredible ability to evade quarantine, as eagerly and easily as Stoffle, as seen in this short enjoyable video:

Such a determined foe as Covid-19 cannot be reasoned with, halted by decree or – much to the puzzlement of the central banks – resolved by printing more thin-air money.

It simply operates by natural laws and rules. Which, by the way, makes it rather easy to predict.

Much more difficult to predict, though, is when we humans will truly wake up to our true plight and begin making better decisions. And I’m not just talking about the coronavirus here. I’m talking about the dangerous levels of social inequity that the Federal Reserve is responsible for creating, both pre- and post-covid-19.

Given the enormous difficulty in getting whole swaths of the managerial and retail classes to grasp such simple and obvious logic as “Everyone should wear a mask!”, it seems thoroughly unrealistic to expect these same folks to thoughtfully tackle the hazards of runaway monetary and fiscal policy.

But they really need to.

Because the current monetary and fiscal trajectory society is on has been well-trod throughout history. We know where it ends — no place we want to be.

Commerce gets destroyed. Households fail. Government and social order fall apart. Fairness and freedoms are lost as it becomes difficult to distinguish between official policies and overt looting.

Real leaders know this history and would both think and act differently in order to avoid the worst risks.  But managers? They just keep operating from the same manual, mindlessly repeating the same steps while hoping for a different result.

I’ve referred to the Federal Reserve as a bunch of psychopaths engaging in cultural vandalism. This is unfair to both psychopaths and vandals.

After all, the most ambitious of them don’t victimize more than several dozen in their lifetime. Maybe a few hundred, tops.

But the Fed? It’s ruining hundreds of millions of lives and livelihoods — both today and in the future.

Sadly, the Federal Reserve has been doing this — unchecked — for a very long time.  Here’s a snippet I wrote for MarketWatch.com 6 years ago.  Every word remains as true today as it was then: 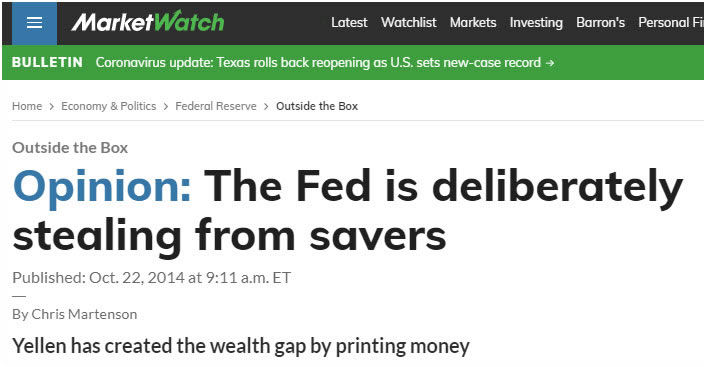 The academic name for the Fed’s current policy is financial repression. But a more apt name would be “Throw granny under the bus,” because the program boils down to taking from savers and fixed-income recipients and transferring that purchasing power to other entities.

The cornerstone element of financial repression is negative real interest rates, of which the Federal Reserve is the prime architect and owner.

From the start of the Fed’s post-crisis intervention through 2013, the total cost of these negative real interest rates was over $750 billion just to savers alone. The loss of income to fixed-income investments (such as bonds held in pensions and money markets) was even larger.

But here’s the rub. That loss of income and purchasing power didn’t just vanish. It was transferred from pocket A to pocket B.

More directly, when the Fed buys financial assets with printed money and — by definition — drives up the price of those assets, it cannot then act mystified why the main owners of financial assets have grown wealthier. Doing so simply insults our intelligence.

Federal Reserve Chair Alan Greenspan, then Ben Bernanke, then Janet Yellen, and now Jay Powell have all operated as mere managers (not leaders) choosing predictably safe plays from the Federal Reserve cookbook. It prescribes a gruel-thin routine of actions the main ingredient of which is printing currency out of thin air.

Each Fed Chairman has dutifully cooked up unhealthy dishes seasoned with hefty amounts of social corrosion, structural unfairness, elitism, and without even a whiff of historical context.

With no leadership on display and cheered on by a compliant press unable to formulate a single critical question, the Fed is now too deep into its cookbook to do anything besides see the process out to its inevitable conclusion.

The Fed has long pretended to be mystified by the rising inequality its policies are obviously causing. Jerome Powell  recently and (in)famously declared during Q&A after a speech that the Fed “absolutely does not” contribute to inequality. That bold-faced lie is infuriating to those who realize just how socially and culturally unfair and damaging the Fed’s actions really are.

When things become too unfair, people stop participating.  If laws are too one-sided and rigged, people stop following them.  If new hires receive a higher salary for equivalent work, the veteran employees stop working as hard.  If students know that their classmates are cheating and getting good grades, they’ll begin to cheat, too.

It’s just how we’re wired.  An aversion to unfairness is in our social DNA.

Peak Prosperity readers know I’m a huge fan of this short video.  It explains everything about the rising tide of social rebellion in America (and features cute monkeys, to boot!):

By unfairly accelerating the wealth gap between the top 1% and everyone else, the Fed is playing with fire.  Seemingly with the same level of ignorance to the consequences as a chimpanzee with a magnifying glass on a tinder-dry savanna.

Money is our social contract.

When that contract is broken, that’s when things really go south for a nation.  Zimbabwe, the Wiemar Republic, Venezuela and Argentina are all past (and some current again, sadly) examples of just how badly the standard of living can plummet when a nation’s money system breaks down.

I cannot predict when all this breaks down as easily as I can predict that it will break down.  A balance must always be maintained between money, which is a claim on things, and the things themselves.  Too many claims and we get inflation.  Too few and we get deflation.

The Fed and the other world central banks have always (always!) erred on the side of “too many claims” in this story.  When in doubt, they print more currency.

And that process is now on hyperdrive.  The post-Covid economy is in a very bad state, and so the money printing at the heart of the “rescue” efforts by the central banks is the biggest ever in history. By a long shot.

So claims go up and up and up, while the economy shrinks. Leaving us with a LOT more money chasing a LOT less “stuff”.

This also applies to financial assets, like stocks and bonds. Printing makes the markets go higher in price and makes investors increasingly dependent on more money printing to support these prices. Eventually, like the era we’re in now, the Fed must keep injecting liquidity on a permanent basis or else the markets will immediately crash.

And as a side benefit, those closest to the Fed get stupendously rich from all that fresh money flooding into the world. These are the same Wall Street firms who hire Fed staffers at the end of their tenure there, thanking them with plush jobs that have little responsibility and huge salary.

But, out in real America, there are hundreds of millions of us angry monkeys watching the Fed stuff grapes into the already full bellies of the elites.  Eventually wide-scale pushback against the Fed’s injustice will erupt.  Protests will increase in size and become more violent.  The police will realize that they’re protecting the wrong people and switch sides.  Then things will get really messy.

My strong preference in life is to avoid unnecessary pain and suffering.  Why wait for the Fed to ruin everything for us? I’d prefer we get pro-active here to avoid a full-blown crisis.  If don’t we’ll be forced to repeat history, whether we want to or not.

Sadly, repeating history and preserving the status quo is exactly what the national managers in the US are intent on doing. Most of the public still thinks of the Fed as the hero in this story instead of the villain it truly is,  and so too much of the populace cheers the Fed along.  The EU and the UK are more or less in the same boat.

All of which means that, just as I warned people to prepare for the Covid-19 pandemic before it hit with full force, you need to prepare now for the coming Fed-created economic/social crisis.

In Part 2: Into The Light: 8 Steps For Surviving What’s Coming, in attempt to be as informative as possible, I share a tremendous volume of the critical data points I’m currently closely monitoring to determine where we are on the timeline to crisis and what’s most likely to happen next. I then provide my eight recommended steps for protecting your wealth, loved ones, and property through the challenges to come.