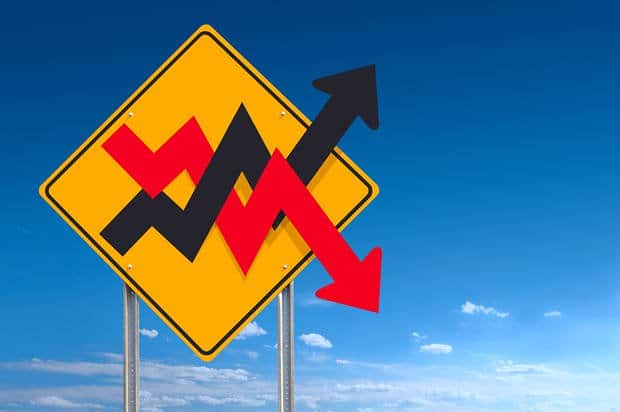 Stocks are at an inflection point.

After a bruising end to 2018, the major indices caught fire at the turn of the New Year as the world's central banking cartel leapt into action. Here's how the US Federal Reserve reacted:

The central banks have more than demonstrated that they are now subservient to the markets. Losses will not be tolerated

Which is why the chart below by Sven Henrich goes far in explaining why they've been in full panic mode this year: a major long-term technical breakdown threatened. As prices fell in later 2018, the S&P 500 broke through a trendline that had remained unviolated since the markets began recovering from the Great Financial Crisis in 2009: 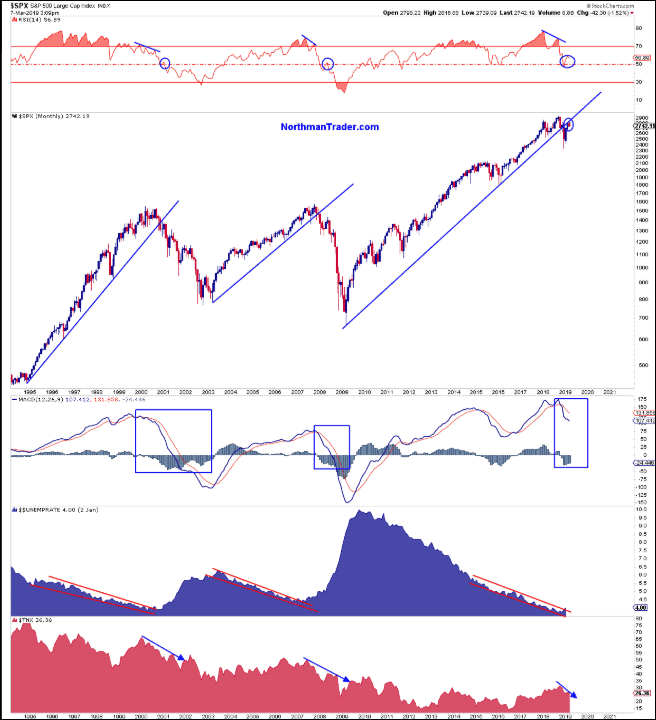 As Sven has been doing an excellent job of monitoring, this violated trendline may now have flipped from “support” to “ceiling” for the S&P.

Which may be why we were treated to not just one, but three Federal Reserve chairs during last weekend's episode of 60 Minutes. Their triple-strength “all is well” show of force was good enough to juice the S&P back up to the long-term trendline this week — but not convincingly through it.

The market looks very much paused at the brink of a breakout here.

The bulls are expecting a sharp rebound in GDP from Q1, which they claim was artificially low due the government shutdown. They point to 2018's solid 3% economic growth, claiming the US is humming along fine and about to get a shot of adrenaline once America and China announce an end to their trade war. In their eyes, the S&P is poised to rocket higher once it punches vigorously above 2820.

The bears see a topping out of a classic bear market rally, one that has been propelled by no convincing fundamentals — only central bank jawboning/easing and continued massive buyback programs (plus this week's rare Quad Witching options expiration). They see an extremely overbought market, with stocks ready to break down to new lows for the year.

Which Way From Here?

If we look over at the bond markets, we see no confirmation at all of the recent exuberance in equities, especially the melt-up seen this week:

When the bond and stock markets disagree, it's usually the (much larger) bond market that has it right.

Moreover, many analysts, including Goldman Sachs' volatility trader Moran Freeman, are predicting a near-term resurgence in the VIX, which would correlate with lower stock prices. 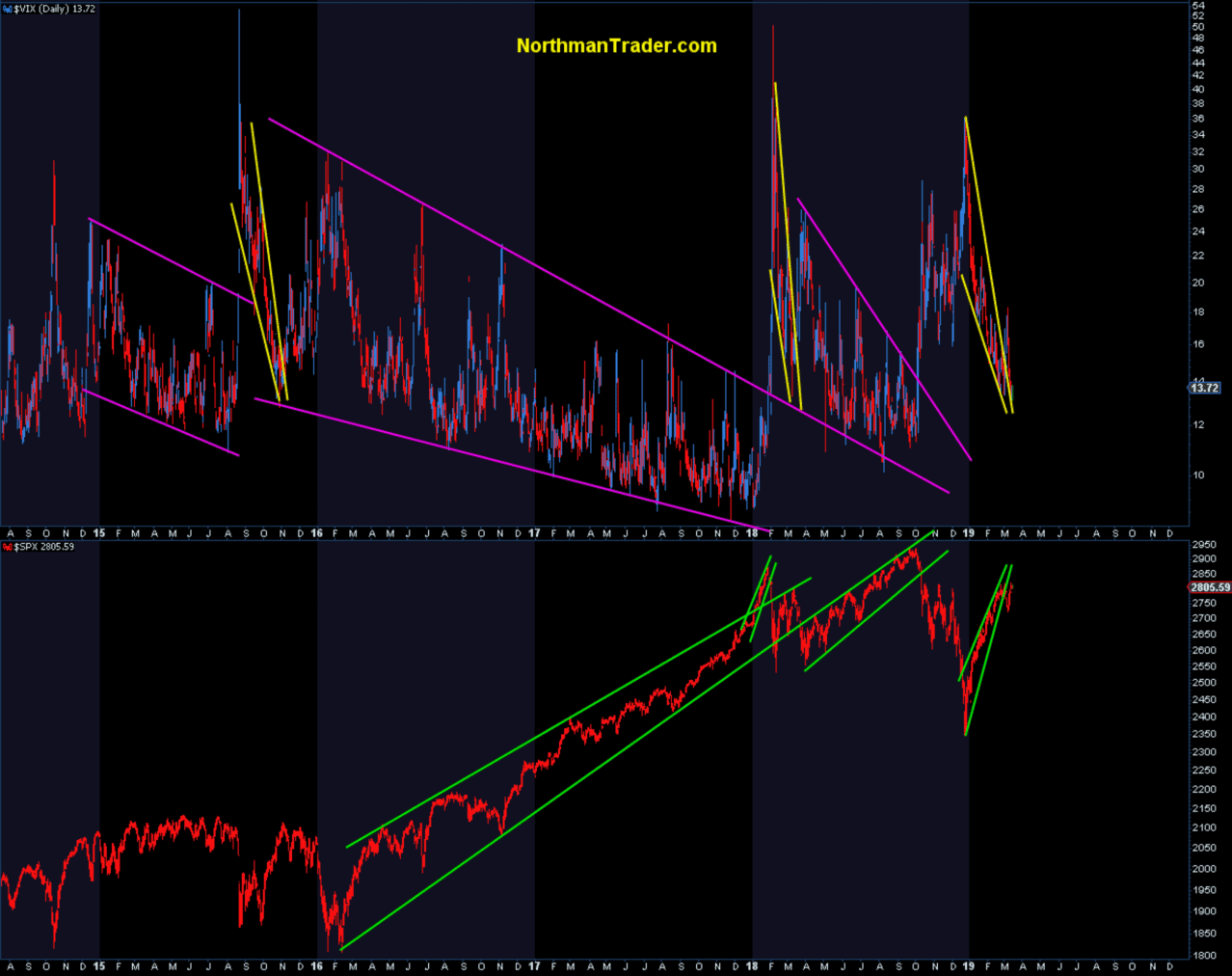 This week, the VIX hit its lowest level ($12.50) of 2019. This suggests a reversal is much more likely going forward — possibly as high as $50 — than continued suppression.

And beyond the technical arguments, the fundamentals underlying the markets are on their way from bad to worse.

DoubleLine's Jeff Gundlach basically vomited on the bull case in his latest macro market outlook, optimistically-titled Highway To Hell (well worth the viewing). In it, he noted how global economic indicators are falling off a cliff at this point: 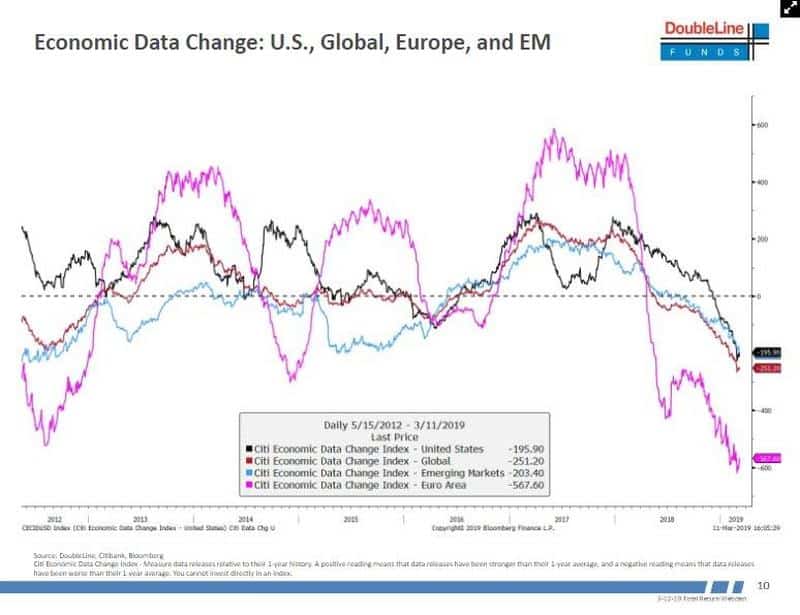 And in terms of stocks specifically, he emphasizes that despite the early ramp-up this year, the S&P “was and is in a bear market”, and that he predicts stocks will take out the December low during the course of 2019 and markets will roll over earlier than they did last year.

GMO's Jeremy Grantham sounds a similar warning, albeit a longer-looking one. Grantham, who has been expecting a meltdown in stocks since last year, not only sees the US stocks as overpriced — he predicts they will deliver sub-par returns for the next two decades that will “break of lot of hearts” among today's investors.

I wrote several reports last year warning of dangerous overvaluation of the FAANG stocks, which had yet to show any weakness at that time. I went as far as to issue a rare notice that I was building a short position against these stocks, one rewarded with a 50% return when successfully exited three months later.

If anything, the big Tech stocks look even more vulnerable now than they did back then.

The NASDAQ (of which the FAANG stocks comprise the majority of the index's market cap) has rocketed up over 20% since its December lows, sitting now just 5% below it's all-time high.

This surge in value is starkly contradicted by the negative developments arising for these companies in 2019. Here are just a few recent ones:

I could easily go on. But do the above headwinds (along with a Q1 2019 US economy growing at a pitiful 0.4%) justify Tech stock prices kissing their all-time highs?

No. Not even close.

Which is why I'm moving a percentage of my “dry powder” cash savings into a new short position at this time, one larger than I placed last year. It's not a move I take lightly (and as usual, this is NOT personal financial advice). I'm only doing it because, in my estimation, the preponderance of evidence for a near-term reversal is overwhelming my strong default risk-averse preference to sit on the sidelines.

In Part 2: Assume The Crash Position we detail out the wide range of options that investors skeptical of current market valuations can consider — for both protecting against a downturn and, for the more courageous, profiting from one. We also reveal the latest outlook from our endorsed financial advisor as well as the latest trades I'm making in my own portfolio.

We should know soon which way this market breaks. If it indeed breaks downward, make sure you've prepared in advance for it.