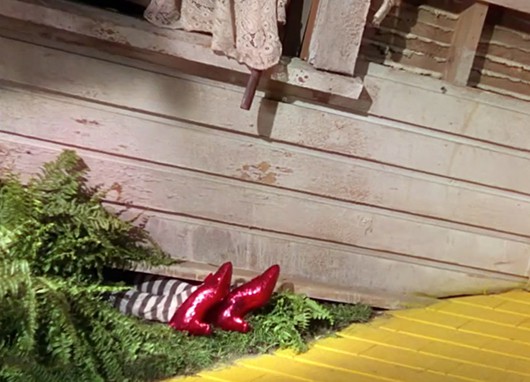 A month ago, in an analysis titled Defying Gravity: The case for hedging against a market downturn, I wrote about the unsustainable state of the stock market's high prices.

In it, I noted how the stock market had risen for an aberrantly-long time time without a correction, and that it hadn't tested its 200-daily moving average price even once since 2012:

Today's markets exist in an Oz-like, fantasy world. For 5 years now, stock and bond prices have risen like Dorothy's balloon, with hardly a puff of downdraft to spoil the fun.

Everybody likes higher prices, so let's have them always go up! Forever!

Whether that can indeed happen is a topic of hot debate, though few are yet willing to predict corrections have been permanently banished from the financial markets.

In this article, we investigate the rationale for prudent hedging in light of today's elevated prices. If, like most investors, your portfolio is positioned long-only (i.e., betting on a continuation of higher prices) and is mostly-to-fully invested in stocks and bonds, read on to learn why having insurance against a market correction is a wise move to consider at this time.

Too Much Of A Good Thing

Consider the price performance of the S&P 500 since it bottomed after the 2008 crisis. It has now enjoyed 34 straight months of upward movement without a correction of 10% (there have only been 2 longer correction-free stretches for the index in the past 25 years):

Furthermore, this half decade-long rally has been unusually strong. Since the end of 2012, the S&P has tested its 100-day DMA only 15 times (that's really infrequent), and traded below is 200-day DMA zero times (that's shocking).

The article highlighted the hopium-laced cheerleading in the financial media that's been bombarding investors:

And the parade of mainstream articles like the following (note the S&P 3,000 tease) certainly helps investor confidence in the party's continuation:

Too late to jump in? All of this has led some on Wall Street to fear the string of good luck could be nearing an end. Some even believe stocks are in the midst of a bubble that could pop in an ugly way soon.

But optimism is still the driving force in investment circles. More optimistic forecasters say it's not too late to jump into the market, even if you've missed the gigantic rally over the past five years.

"We don't see any prospect of a recession any time soon," said Bruce McCain, who helps oversee more than $20 billion as chief investment strategist at Key Private Bank.

While the size of the upcoming gains might be more muted, McCain said "you should be able to capitalize on overall earnings growth."

Amoroso echoed that sentiment, saying: "It's not too late but investors do need to realize that expectations of future returns have come down."

A few market watchers remain very bullish on stocks. Last week Morgan Stanley predicted the S&P 500 could surge to 3,000 by 2020 because the lackluster economic recovery doesn't appear nearing its end.

In fact, the ratio of bullish to bearish analysts is at all-time highs right now (underscored by Monday's news that David Bianco just upped his year-end S&P target by 200 points): 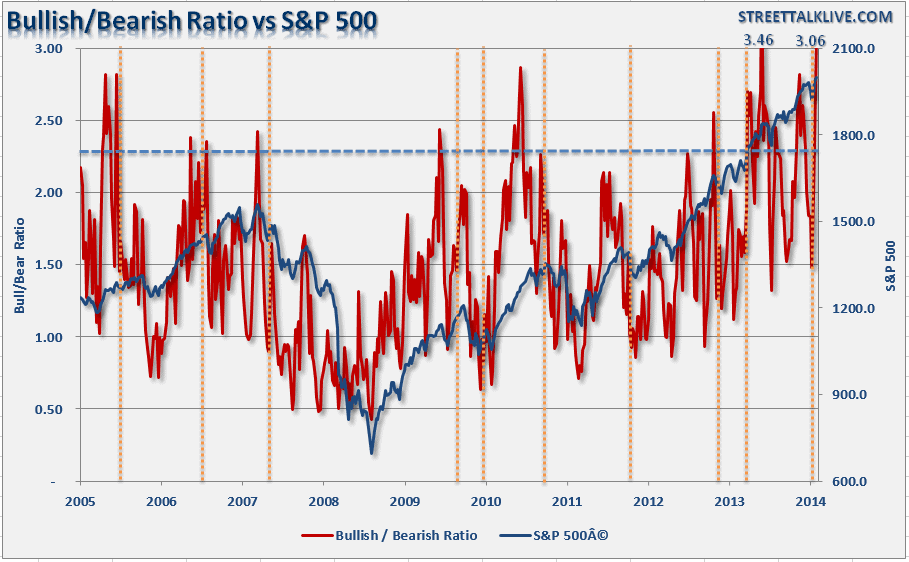 So, here we are. A 34-month long winning streak, with practically every analyst on the same side of the boat, confident that "things will go higher from here".

And it then went on to detail the increasingly concerning warning signals flashing "trouble ahead":

We spill a lot of (digital) ink here at Peak Prosperity identifying the data and fundamentals-driven evidence that suggest not only is the current market rally unsustainable, but that much of it is based on accounting chicanery, faulty assumptions, intervention, manipulation and fraud. Here are recent examples from Chris, Charles Hugh Smith, Brian Pretti and myself (while writing this article, Charles directed me to an excellent recap of current market risks by John Hampson which can be read here).

But ignoring all of that for the moment, even if you choose to subscribe to the bullish case, there are still very compelling reasons you should consider holding some insurance here.

First off, occasional corrections are good for bull markets. They keep the uptrend from getting out ahead of itself too much, otherwise larger, more painful downdrafts will result when corrections do occur. Now ask yourself: Is a 5-year bull run ,with zero 10% corrections over the past 3 years, likely to be more or less painful when it does drop?

From the technical analysis side, there are lots of indicators that the current rally is 'long in the tooth'. From The Keystone Speculator: 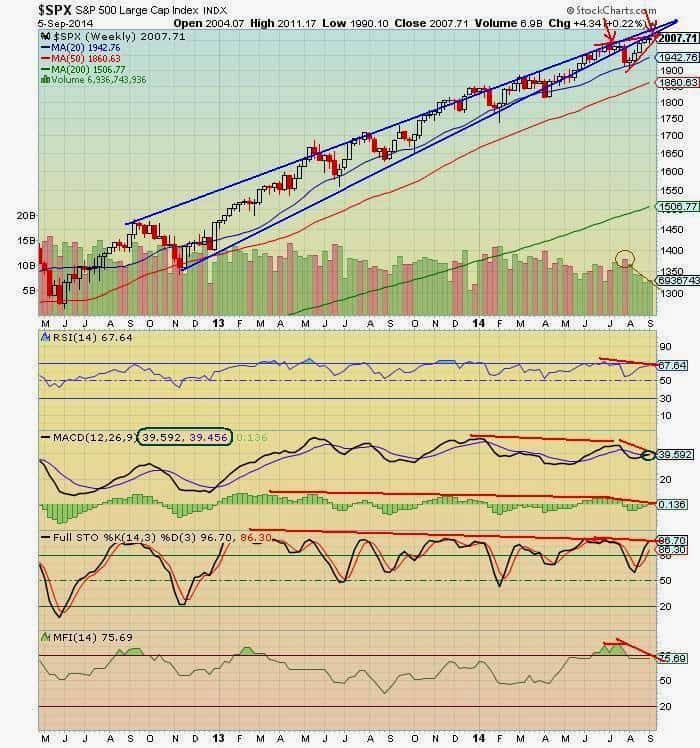 The bears have the weekly chart on a silver platter. The prior top in July was an easy call based on neggie d and now the chart is set up again favorably for bears. The blue and red rising wedges, overbot stochastics and universal negative divergence across all indicators want to see a spank down and lower prices ahead. Price is extended well above the moving averages requiring a mean reversion lower. The candlestick from last week is a doji indicating that a trend change is on tap

The technicals are clearly flashing warning lights that stocks are in "overbought" territory.

It's always wise to watch what the successful players are doing. And in the current environment, they're taking a lot of their chips off the table. From Zero Hedge:

Icahn, Soros, Druckenmiller, And Now Zell: The Billionaires Are All Quietly Preparing For The Plunge

"The stock market is at an all-time, but economic activity is not at an all-time," explains billionaire investor Sam Zell to CNBC this morning, adding that, "every company that's missed has missed on the revenue side, which is a reflection that there's a demand issue; and when you got a demand issue it's hard to imagine the stock market at an all-time high." Zell said he is being very cautious adding to stocks and cutting some positions because "I don't remember any time in my career where there have been as many wildcards floating out there that have the potential to be very significant and alter people's thinking." Zell also discussed his view on Obama's Fed encouraging disparity and on tax inversions, but concludes, rather ominously, "this is the first time I ever remember where having cash isn't such a terrible thing." Zell's calls should not be shocking following George Soros. Stan Druckenmiller, and Carl Icahn's warnings that there is trouble ahead.

These investors each amassed billions through decades of investing savvy. If your portfolio is still fully allocated to stocks and bonds, it's worth investigating: What do these guys see that I don't?

Which Brings Us To Today

Since that article was published last month, price appreciation in the major indices stalled out, volatility dramatically increased, and the market has corrected by 7% since its mid-September high. Let's revisit that chart of the S&P 500, updating to today:

It's important to note that the 200-DMA was finally taken out over the past few days of trading — for the first time in years. And the S&P has quickly swung from an all-time record high to nearly wiping out all of its year-to-date gains. This recent market action represents a stark departure from the ever-upward performance investors have become accustomed to since the Fed began its quantiative easing program.

The past week has created a lot of technical damage to the stock market that will be harder to repair if prices continue downwards from here. Add to this the recent litany of data from around the globe showing more anemic growth than anticipated in Europe and Asia, and the future of financial asset prices looks even less bright. And don't forget that the Fed's QE program officially wraps up this month.

What positive catalysts are out there that investors can count on to boost stock prices higher from here? Precious few at this time.

There is a good chance that we are witnessing the turning of the tide here, when a prolonged central bank-fueled bull run in the financial markets is coming to an end. The timing of this turn could take the better part of year, or it could happen much more swiftly. The important point is to take precautions now, before a bear market arrives in earnest, to protect your financial wealth, especially if you are positioned long-only in your portfolio (as many investors still are at this time).

As my original piece concluded with an advisory to consider adopting appropriate hedging positions in your portfolio, this one will reiterate the message. Those who chose not to hedge and remained long just lost 5% or more of their wealth in the past three trading days alone, and are likely very worried right now that deeper losses lie ahead if the downward momentum builds from here.

Risk management is the bedrock of investing successfully over time.

You always want to have protection in place and/or diversified holdings in case your main strategy doesn't pan out as intended. Remember, a 25% drop in your portfolio means it then has to gain 33% just to break even (and it's pretty easy to find credible predictions for a coming correction of 50% or more).

You also want to have some liquidity held in reserve to take advantage of 'no brainer' opportunities when they come your way. Remember the old maxim: Buy low, sell high. Just about everything is priced at "high" today by traditional valuation metrics. Keep some cash on hand to deploy in the aftermath of a correction, when prices are more favorable.

Most investors only come to appreciate the wisdom of these lessons painfully, after a market downdraft has burned them. Wiser investors hedge.

"Hedging" is the practice of allocating a minority percentage of your investments to safer or inversely-correlated holdings relative to the majority of what's in your portfolio. Simply increasing the percentage of your portfolio held in cash — particularly during times of apparent overvaluation, like now — is an easy and practically risk-free hedging step that anyone can do.

In Part 2: How to Hedge Against A Market Correction, we explore the standard range of hedging techniques that are commonly used to offer portfolio protection and/or upside during a market downturn. These include stops, inverse and leveraged securities, shorting, options, and futures. If you read this last month and took action, good for you. If you didn't read it, or didn't act on it, it's more relevant than ever right now.

And for those who choose to forgo hedging, you might want to pick up a pair of ruby slippers. If you get caught by a market correction, click them together three times and pray like heck they return your nest egg to the value it was before…

It pains me that this tongue-in-cheek prediction is turning out to be validated so quickly.