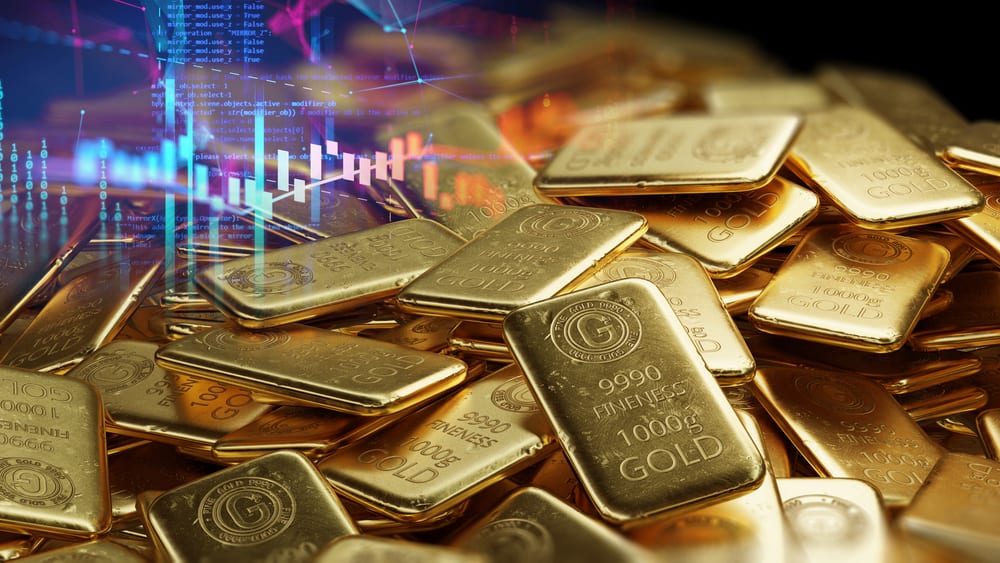 The buck fell 0.91 [-0.85%] to 105.92 on the week; most of the damage happened on Monday and Tuesday. While the buck remains (barely) above the 200 MA, this week marks a new 4-month closing low. Is the dollar rally over? I’ll show you a monthly of the buck this week – it might provide a better sense of where things are headed. The monthly chart looks pretty unhappy; November’s loss is almost 5%. 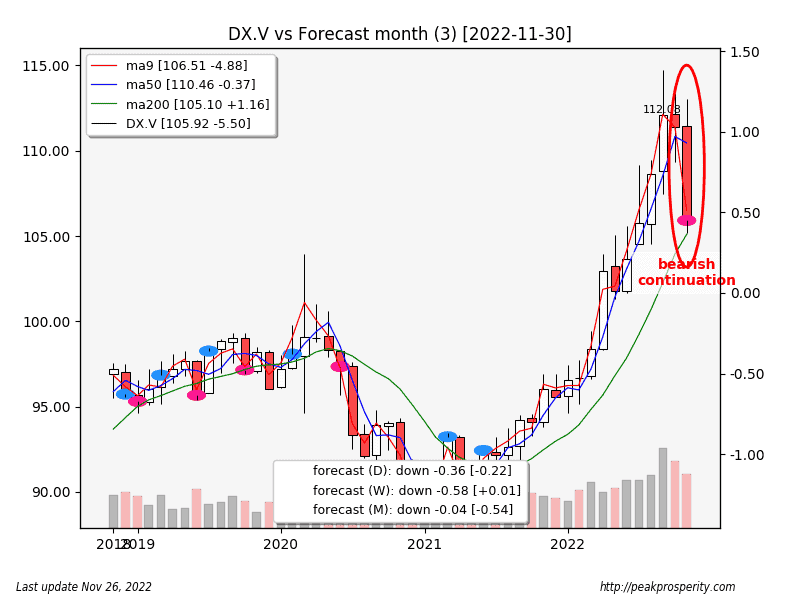 Gold moved slightly higher this week, rising 8.5o [+0.48%] to 1761.80. Mostly this happened in the latter part of the work. On the monthly timeframe, gold is up 121.10 [+7.38%]. Gold/Euros is also higher in November, up 2.02%. You can see that after seven months of decline, gold is now rallying back fairly strongly, having wiped out three months of losses. The gold/EUR move tells us gold’s move is more than just currency. Also, the open interest for gold (not shown) continues to fall – OI fell about 29k contracts this week. That usually happens at or near the lows – and is a bit surprising after a $121 move. 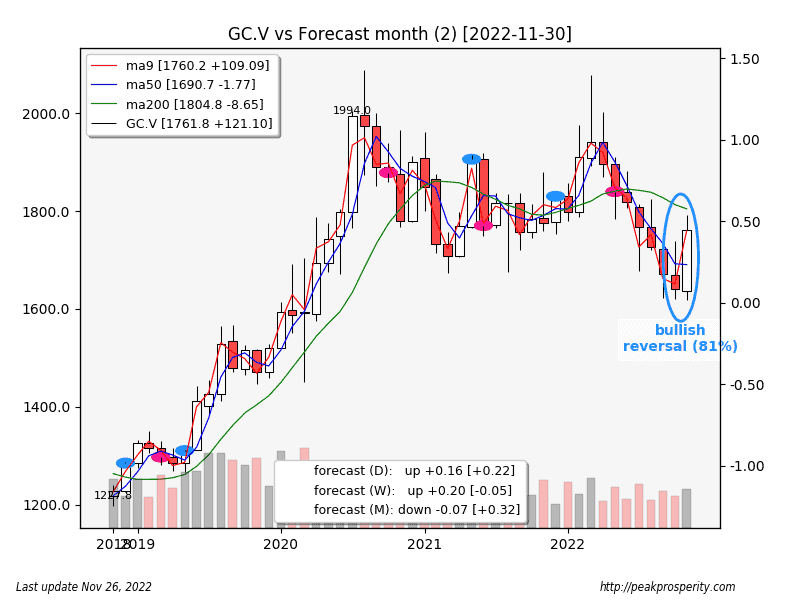 Silver outperformed gold this week, rising 0.61 [+2.91%] to 21.61. I’ve included a daily chart of silver with OI, to show how the silver open interest has continued to plunge even as price rebounded. This is really not normal. If the banksters are bailing out of their short positions at this point in the chart…that’s good news. It might be telling us there are higher prices to come; it also could be an artifact of the end-of-month delivery shenanigans. Silver also managed to close back above the 200 MA (not shown) this week, which is another positive sign. 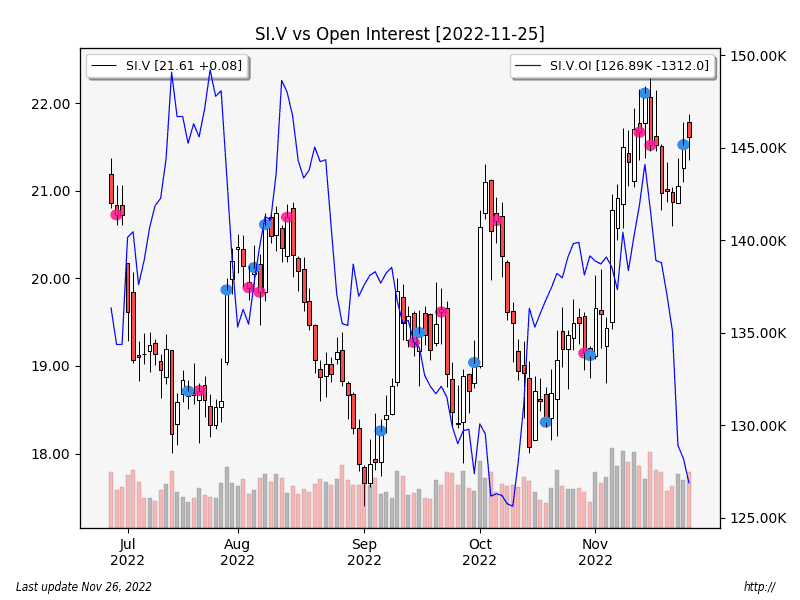 There was also good news from the metals ratios: GDX:gold +3.36% (bullish), GDXJ:GDX +0.93% (bullish), and silver:gold +2.92% (bullish). The miners looked especially strong. Miners >> silver >> gold. That’s a bull market. Could gold be sniffing out a further plunge in the buck? The futures markets are still projecting a 75% chance of a 50 bp Fed rate increase on Dec. 14, along with a 25% chance of a 75 bp rate increase. It kinda feels like all the “layoff” talk is hinting at a Fed pivot. Will it happen? The labor market might be the key. We have payrolls next Friday.

More tea leaves: the latest short-term rate chart. The 3-month Treasury yield (blue line) confirms the 4.25% target for the Fed Funds rate, but not much more than that. The 6-month is hinting at another 50 bp on top of that. Powell was very firmly hawkish at the last meeting. That was before the layoffs. How will those layoffs affect the labor market? If the labor market remains tight (“disability” is one key factor, but only Ed Dowd and his friends know about this – Wall Street remains mostly ignorant), we could be in for a volatile Payrolls Friday. The non-functional-8-mouse-booster uptake has not been particularly strong, so maybe disability will retreat, at least somewhat. 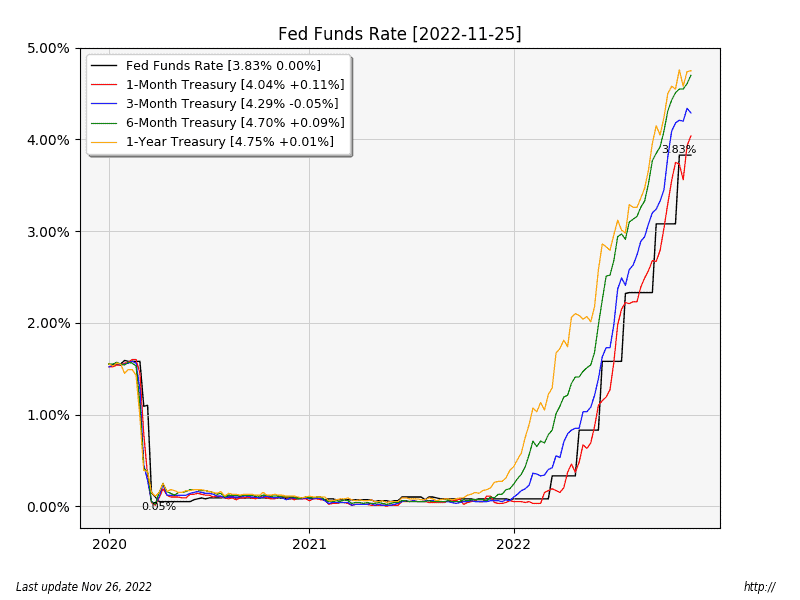 Crude dropped 3.83 [-4.78%] to 76.28, falling to a new 11-month low. Crude has fallen five of the last six months. Will the downtrend continue if the pillaging of the SPR stops? Looking at open interest, crude OI is at its lowest level in (checks notes) EIGHT YEARS – dating back to the big plunge (from $110 down to $45) back in 2014. Banksters are (probably) not short oil. Does this mean something? I’m not sure I’d be short oil either. How long this takes to turn into a trade is anyone’s guess. I thought it would happen November 9. Nope. 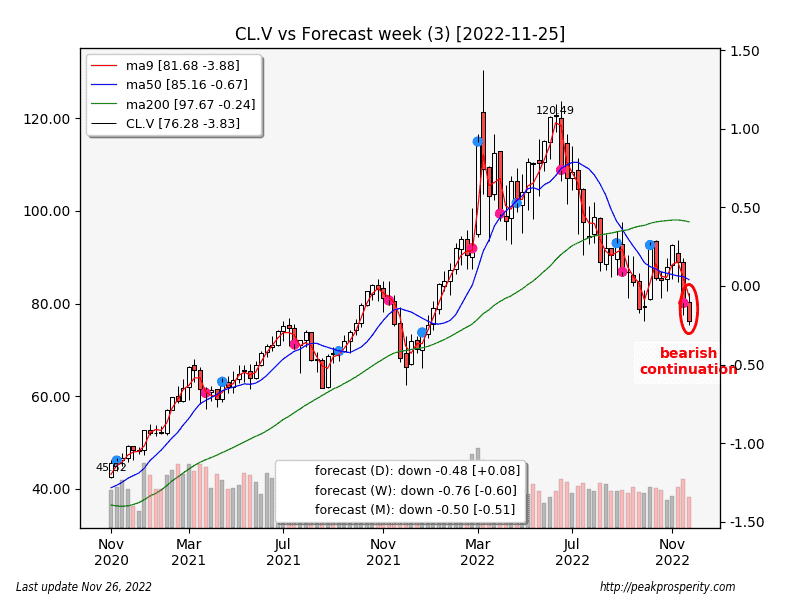 Crude oil pillaging from the SPR slowed dramatically last week. This is the smallest Biden-Handler “campaign contribution” we’ve seen since early 2022, a mere 1.6 million barrels, or about $122 million at current prices. Is energy inflation over, following all the carefully timed post-midterm layoff announcements? The low OI for crude isn’t suggesting that. The Biden-Handlers resurrecting the Carter era “windfall profits tax” (punishing industry for your bad policy – tantamount to beating your wife because you were drunk and broke the wine bottle) could be a tell. I expect it will be just as effective as it was during the Carter era. Although speaking of Carter, isn’t it interesting how he’s living in a basic house, while (say) Obama has a seafront mansion and a $65 million book deal? What’s that about? “Reparations”? “Equity”? Or maybe its something else? I digress. 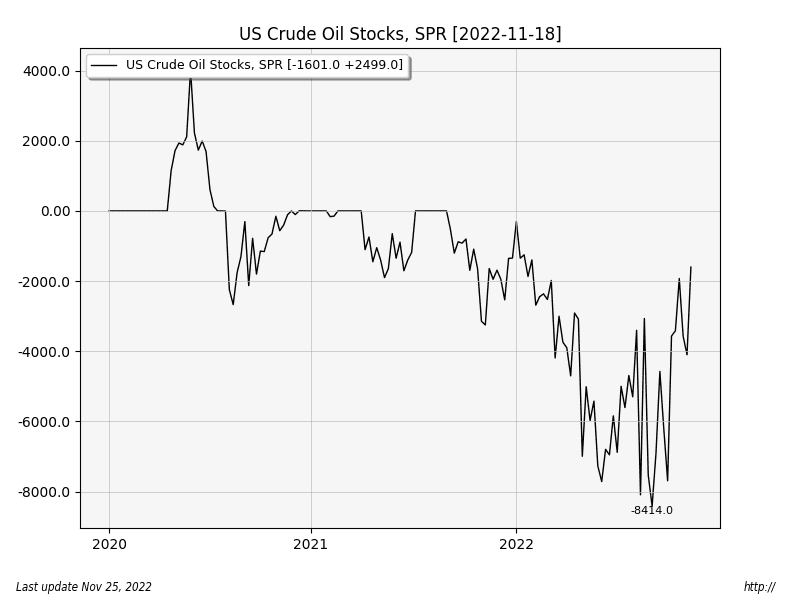 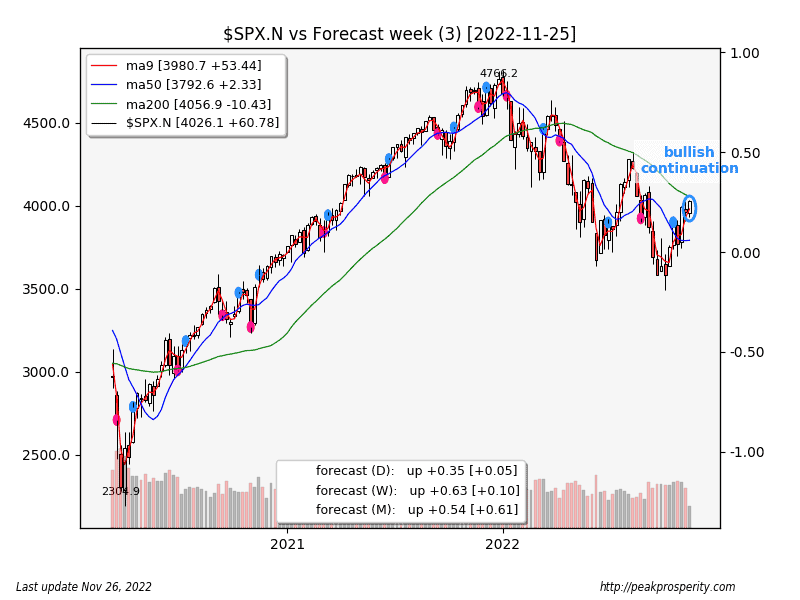 The two economic reports this week:

‘No One Knows What’s Happening in This Small City’ in China: Resident (Source – ET); “The shortage of food was caused by the local government appointing the vendors who can supply food, who then sell it at very high prices. Other suppliers are not allowed to deliver food to residential complexes, Wang said. “No matter how high the prices are, people still have to buy from government-designated suppliers, because we have to eat,” Wang said. “We have to pay over $8 for one Chinese cabbage,” Wang said angrily….Residents have to bribe government staffers to get access to overpriced food, according to Wang.”

This explains Zero Covid. Terrify the population, then extort them. “Think like a criminal.” I’m learning. Slowly.

Nomi Prins Interview (Source – KWN); 1h interview; Nomi thinks the Fed will pivot.  She sees a mid-December gold rally. The rally in silver and the miners, the positive ratios, and the falling dollar all support her thesis. My guess: it, probably, depends on payrolls & the tightness of the labor market. Which, I believe, depends on disability. Which, in turn, depends on Holy Shot uptake among the working age population.

Deposition: Fauci admits China convinced him to push lockdowns (Source – wnd);  igh priest of Science, Pope Fauci, imposed that wealth transfer/national lockdown allegedly based on the statements of one guy – Cliff Lane – his deputy at NIAID, who was in China with the WHO. Science!

Has Big Pharma Hijacked Evidence Based Medicine? (Source – youtube/malhotra); 1h10m presentation. Answer: yes.  Corporations are psychopaths. In the UK, “shared decision-making” in medicine is shown to reduce prescriptions/Pharma revenues. Use absolute risk reduction (number needed to treat: NNT) to analyze drug performance. For the Holy Shot, in Omicron [@43:19] NNT to prevent one death, 80+ group: 7300. In the 40-49 group: NNT=167,000. Adverse events happen much more frequently than this. Shockingly, the video is still up on youtube. Are the little people allowed to talk about science again?

Covid 19 vaccines and the misinterpretation of perceived side effects clarity on the safety of vaccines (Source – paper); according to the author (Chief Science Officer of Full Spectrum Biologics), all the vax side effects are due to tbe nocebo effect and stress from anti-vaxxer misinformation. Contrast with Dr. Malhotra’s detailed technical analysis. My assessment: our Hybrid War opponent “experts” are third rate. This is literally the best they can come up with.

“Until Proven Otherwise” (Source – vsrf/rumble); a short video [4m] – Dr. Malhotra and Dr. McCullough provide us a new framing: sudden death is caused by the shot, until proven otherwise.

White House Announces ‘New Enforcement Guidance’ on COVID-19 Vaccine Mandates (source – ET); It announced “new enforcement guidance to ensure nursing homes are offering updated COVID-19 vaccines and timely treatment to their residents and staff,” according to a White House fact sheet released on Nov. 22. NNTV to save one life, 80+, in Omicron: 7300.  What’s that SAE rate again? V-Safe? Any help? And note the desperation: they’re only injecting the old people, who can’t run away.

FDA claims ivermectin ‘horse dewormer’ smear only a ‘recommendation’ (Source – wnd); “In a lawsuit by three doctors accusing the FDA of interfering in their treatment of COVID-19 patients with ivermectin, a lawyer for the agency insisted that urging people to ‘stop’ taking the medicine was merely an informal recommendation.”

More vaccinated people died from COVID than unvaccinated people in August (Source – washingtontimes); lots of vax-genuflecting in the body of the article, but…the title is enough to make a guy vax hesitant.

Curative shutting down COVID-19 testing sites in the D.C. area and nationwide (Source – washingtontimes); because the public has totally lost interest.

Significant Post-COVID Brain Abnormalities Revealed by Special MRI (Source – scitechdaily); “According to the U.S. Centers for Disease Control and Prevention (CDC), approximately one in five adults will develop long-term effects from COVID-19.”

Nobody cares anymore about Covid, so they have switched the fear campaign from “death” to “Long Covid.” Lots of people have Long Covid, and there’s no treatment, see, so unless you get your shot and wear your double-mask, you’re doomed. Get your “Spikevax” booster, so your body produces a huge number of artificial (pseudouridine-filled, longer-lasting) spikes, which will allegedly protect you from a much smaller number of gain-of-function spikes produced by the Fauci-funded, lab-leaked infection.  Science!

At the same time, YouTube is no longer removing videos that contradict the departing, and infallible Pope Fauci and his Technocracy priests. And the word is out – on MSM! – that there was a lab-leak coverup, right as Fauci is leaving. Wow. What’s next? Articles that show the shot isn’t safe and effective? That there weren’t any WMD in Iraq? Babies weren’t tossed out of Incubators? There was no Bomber Gap? No Missile Gap? No Tonkin Gulf? That Ukraine is actually a corrupt cesspool, where the endless, unaccoutable flood of US taxpayer money is laundered for the benefit of the power structure and the Oligarchy?

Yeah ok, some of that will probably take a while. But there is progress. The focus change acknowledges all they have left is “long Covid.” At least until the next lab-leak happens. Perhaps we should do something about gain of function?

Curious this only happened after the midterms. I wonder why “the opposition” didn’t run on this issue a few months back?

Related: below, find a long-but-interesting interview [55m] with Whitney Webb, who talks about her new book, “One Nation Under Blackmail” (goodreads). The highlights: basically the US intel agencies and organized crime joined forces almost 100 years ago, they hold power through blackmail, and that’s how things get done. Lots of excuses were used along the way: “we had to defeat Hitler”, then “we had to defeat Communism”, and maybe now “we had to save the world from the Big Bad Pandemic.”

I thought Mafia-Intel was a different framing than we normally see, and may be worth considering. State-sponsored Jeffrey Epstein was part of this network. I’d guess the Utah Server Farm plays a role too. It sure explains the Uniparty, why there was no “Red Wave”, and why voting machine corruption is literally everywhere – and completely ignored, too. Also, Event 201, the whole mRNA operation, gain of function research (and the coverup), rubber stamps from FDA/CDC/NIH, papers that just never get published.  No Treatments For You, the widespread use of the term “conspiracy theory”, a Mockingbird-like grip over the media.  Perhaps also FTX, Ukraine, Hunter Biden, “10 held by H for the Big Guy”, and that “mysterious” pipeline explosion. And: “That’s an awfully nice medical practice you got there, Doctor. Be a shame if anything happened to it.” The last three years definitely felt like a mafia operation; bullying, intimidation, lockdown, threats of violence, extortion, and death – The Godfather, but at a global population level.  Mr Gates and Epstein were friends.  Clinton too.  Where does the WEF fit in?  A front/influence organization? Perhaps Mafia-Intel really wants to remain in power after peak oil hits. For sure they know about it. Does it hang together? What do you think?

The good news: all they have are second-rate people working for them, at least out front anyway. And things are not trending in their favor. Truth is coming out. My sense anyway.

This holiday I’m thankful for all the allies we have found in this Hybrid War operation. Early Treatment Saves Lives. And a whole lot more besides. It is empowering. It reduces fear.