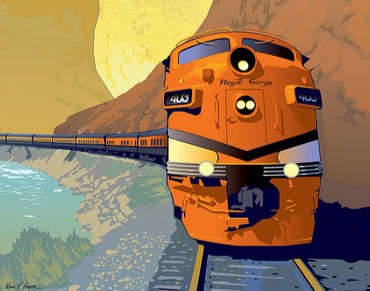 Getting on the Train

Getting on the Train

Given emerging data in 2012, it's becoming increasingly clear that the post-war automobile era in the United States is now in well-articulated decline. Accordingly, it makes sense to note the beginning of a long-term supertrend that is just getting started: the resurrection of America’s rail system.

At Seattle’s historic King Street Station (a classic example of early 20th Century railroad architecture), a nasty looking dropped-tile ceiling – which hung above travellers for decades – was removed late last year to reveal ornate plasterwork as the building undergoes extensive renovation. These cosmetic (and structural) alterations are part of a wide-ranging upgrade to the entire Cascades passenger rail service that runs from Vancouver, British Columbia, to Eugene, Oregon.

In Tacoma, for example, a new station will either be built or renovated, and part of the Cascades line will be re-routed from its current shoreline path more directly through that city. Elsewhere, bridges are being rebuilt, track is being upgraded, and other infrastructure improvements are underway as part of the $500 million program to resurrect more efficient, faster inter-city rail in the 466-mile Amtrak route through this part of the Pacific Northwest.

These changes will not bring European-style high-speed rail to the United States. Indeed, in many similar projects across the country, top speeds of 125 mph will characterize new system capability, rather than the average speed actually maintained from city to city. However, the incremental improvements now underway will become the platform for the next phase of investment, as Americans are increasingly persuaded to limit their car ownership and make rail transport part of their lives once again.

Up until World War II, rail transport of all kinds – intercity, light rail, and commuter rail – dominated transportation in America. Los Angeles had the largest light-rail system in the entire world, connecting the San Fernando Valley to Long Beach, and San Bernardino County to central L.A. and the northern reaches of Orange County. As the old saying goes, however, the car killed America. And the following 40 years from 1945-1985 saw a relentless decline of all forms of rail in the United States.

To get a sense of what the country lost as it eagerly built out a vast highway infrastructure and foolishly stopped investing in rail, let's look at two historical maps showing a veritable collapse of passenger route miles over just a ten year period. The first map shows that in 1962 intercity passenger rail network still covered 88,710 route miles. 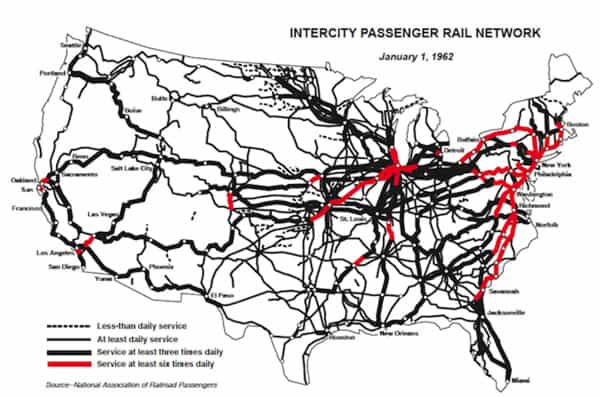 Just ten years later, however, with intrusive highways bisecting American cities and ruining the integrity of their downtowns, the number of passenger route miles had collapsed by over 75%(!), to just 19,366 miles. 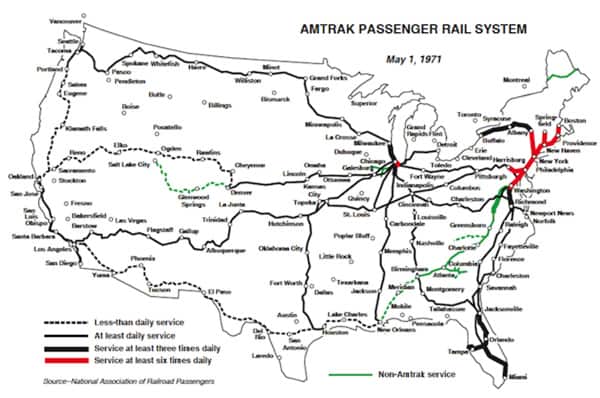 Most people born after World War II have regarded Amtrak as a kind of joke, with its routine dysfunction and massive annual operating losses. The economics of national rail transport, however, deem that your railway system will only be as efficient as the proper mix of investment and operational fitness allows. If you starve your railways of upgrades, make them share tracks with freight rail, and divert national infrastructure spending to other modes of transport, the results will be quite predictable.

One of the great misunderstandings of public rail transport is the mistaken belief that it should run at an operating profit. Not so. The purpose of commuter rail, light-rail, or intercity rail is to harvest economy-wide efficiencies and to ensure that wasteful expenditures spent collectively on transportation can be directed elsewhere. These "savings" were not an issue and were harder to determine during the cheap oil era, when much of the national highway system was built during the era of $14/bbl oil. Now, however, the impact on household budgets and monthly cash flow from much higher oil prices is pushing U.S. transportation demand rather dramatically away from roads and highways – and instead to rail.

In Los Angeles, for example, where the aggressive Measure R has been restoring L.A.'s lost light-rail system, annual ridership has made extraordinary gains. A recent piece from LA Observed reports that "[a]verage weekday ridership on Metro's rail lines in September soared to 357,096, up nearly 12 percent over the same time last year and 16 percent over 2010." Similar restorations of commuter rail in cities like Boston and improvements in either infrastructure or rolling stock in the NY Metro region have emerged in the past decade. Indeed, some U.S. regions took the signal of oil's price revolution early and began work on local rail systems long before federal spending began to shift, ever so slightly, to rail transport.

Meanwhile, on the national level, Amtrak just announced that ridership hit an all-time high and has climbed nearly 50% in the past decade. From its October 2012 press release:

Amtrak carried more than 31.2 million passengers in Fiscal Year 2012 ending September 30, marking the highest annual ridership total since America's Railroad started operations in 1971 and the ninth ridership record during the last ten years. A year-over-year comparison of FY 2012 to FY 2011 shows ridership grew 3.5 percent to a new record of 31,240,565 passengers and ticket revenue jumped 6.8 percent to a best ever $2.02 billion. In addition, Amtrak system-wide on-time performance increased to 83 percent, up from 78.1 percent and its highest level in 12 years. During FY 2012, ridership on the Northeast Corridor is up 4.8 percent to a record 11.4 million, state-supported and other short distance routes is up 2.1 percent to a record 15.1 million and long-distance services is up 4.7 percent to their best showing in 19 years at 4.7 million. Also, FY 2012 produced other ridership achievements including new records for 25 of 44 Amtrak services, and 12 consecutive monthly records with July being the single best month in the history of Amtrak.  Since FY 2000, Amtrak ridership is up 49 percent.

Many will decry the fact that Amtrak and the United States as a whole are still not in a position to offer European- or Asian-style high-speed-rail, where sustained traveling speeds routinely average above 150 mph. However, five to six decades of neglect necessitate that the U.S. undertake its resurrection of rail in phases. Two of the many projects around the country (The Vermonter & The Cascade Line) demonstrate exactly the type of initial heavy-lifting that must be done, in which fundamental changes are made in route selection and in the separation of tracks between freight and passenger rail.

Three states, Vermont, Massachusetts, and Connecticut, are currently in partnership with Amtrak to upgrade tracks, bridges, and stations along the route between Burlington and New York City. The state of Vermont has just completed its part by upgrading track with new, very long, continuously-welded rail, which will increase speeds. Work in Connecticut and Massachusetts is now underway, but one of the more significant transformations occurs in the switching of 60 miles of track from Palmer and Amherst back to the other side of the Connecticut River. This is actually a restoration of the original route between Vermont and New York, and means that trains from Springfield, MA will now travel north to Holyoke, Northampton, and then Greenfield before joining up again with the current route through Brattleboro in southern Vermont. Below is one of the new train stations, located in Greenfield, Massachusetts. 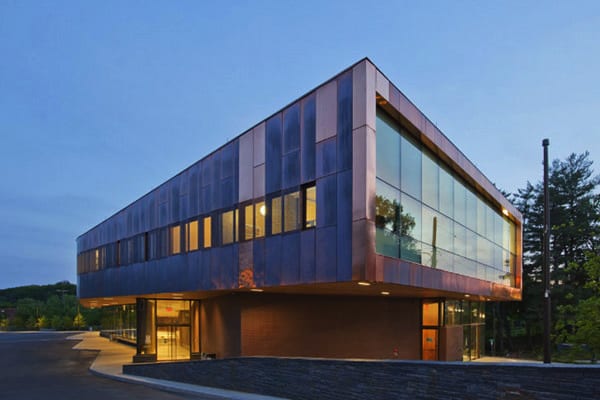 In bringing The Vermonter back to the west side of the Connecticut River, Amtrak is rationalizing the route in several ways, but most importantly it is reducing the passenger train's exposure to freight traffic. Shared tracks, in which passenger service and freight traffic run on the same routes, is actually an enormous problem in the United States and accounts for a tremendous amount of the dysfunction that many users of Amtrak services experience. The biggest change in the Vermont-New York City trip, therefore, will come via on-time reliability as the transfer away from Palmer, MA will greatly reduce overlap with freight rail. Completion of this project is currently set for 2014.

The twin ports of Vancouver, Washington and Portland, Oregon – straddling each side of the Columbia River – have seen very strong growth the past few years as increasing volumes of lumber, potash, and wheat are shipped to Asia. Accordingly, on the north side of the river at the Port of Vancouver (Washington), a large freight rail project has been underway to help increase loadings.

But one of the little-noticed initiatives is the construction of new track to alleviate congestion for passenger trains as they head out of Portland toward Seattle. Finally, these trains will be able to steer clear of freight traffic at the Vancouver, Washington side of the river.

As usual, these are not the types of splashy, high-profile infrastructure improvements that garner headlines. But the Portland to Seattle route typically has had very poor on-time reliability, which invariably reduces ridership. As mentioned in the start of this essay, Cascades Line improvements are quite wide-ranging, with the Federal Government having awarded over $800 million to multiple projects. The upgrades will continue for several years, with noticeable differences in on-time reliability already in force.

Aiming for the Virtuous Circle: Reliability and Ridership

Amtrak's 50% increase in ridership the past decade certainly began as a result of rising oil prices, and not because of any notable service improvements. However in the latter part of the decade and especially in the past 3-4 years, Amtrak (and other rail networks) have started to deliver substantial improvements to riders as the upgrade cycle gains momentum. 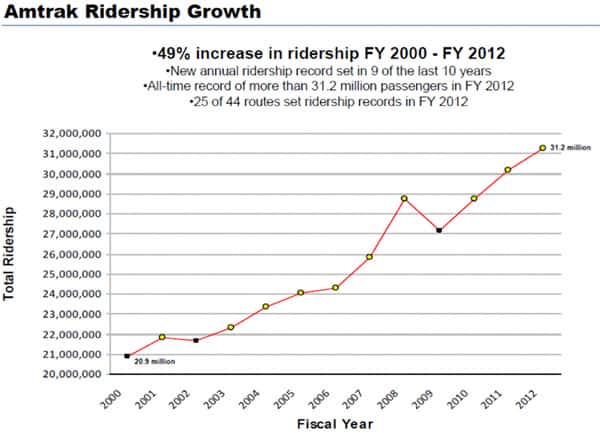 Deep skepticism has greeted just about every major rail project in the country over the past twenty years. But a virtuous circle, in which riders are persuaded to reduce car-miles driven, has started to unfold as heavier demand comes online for rail services. This has been especially true in cities such as Los Angeles which started its light-rail project twenty years ago, greeted initially greeted by a fearful public. Now however, L.A. is laying track down along many of the same routes from its pre-war light-rail system. It is finally becoming possible to live in Los Angeles without a car.

Various trends are already coming together that will support the resurrection of rail and possibly strengthen it as we move out towards 2025. In Part II, Reducing Your Exposure to Oil, we explore ways to take part in the U.S. rail renaissance. I also offer a personal example of how much savings my own household has captured by moving to a city that is served by extensive rail transport. Finally, I give a brief update on energy transition, as the developed world continues to move away from high-priced oil and pursues economic development along the contours of the powergrid.