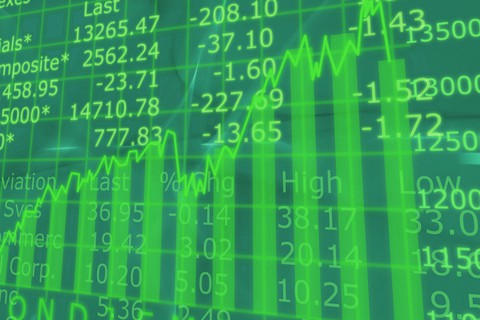 Get Ready for Rising Commodity Prices

Get Ready for Rising Commodity Prices

On the Nature of Conspiracies

The human mind seeks a narrative explanation of events, a story that makes sense of the swirl of life’s interactions.

The simpler the story, the easier it is to understand. Thus the simple stories are the most attractive to us.

This is one reason behind the explanatory appeal of conspiracies: 'Event X' occurred because a secret group planned and executed it.

Power groups may indeed have both the motivation and means to influence or control events. Certainly many price-fixing cases that go to trial uncover just such shadowy groups and conspiracies.

Even the Executive branch of government is, in essence, a series of private meetings in which policy makers craft plans to influence or control a series of events. And so we find the Internet a-buzz these days with rumors of grand designs of Orwellian-style populace control.

But conspiracies and power groups do not always provide comprehensive explanations for what we observe.

Life is messy, and situations with many participants and interactions – for example, markets – tend to be driven by amorphous forces, such as the herd instinct; and emotions, such as the infamous 'fear and greed'.

We have to question the ability of power groups to influence trends shaped by millions of participants and transactions.

For example, if we believe that the stock market is controlled by a power Elite, then we have to accept that this group engineers crashes and recessions along with Bull markets. Various explanations have been offered on how the Elite gains from crashes and crises (for example, Naomi Klein’s Shock Doctrine), but accounts from insiders suggest the 2008 financial crisis was not planned by the conventional power Elites. Rather, it left them scrambling to keep the system from melting down.

In other words, relying entirely on the machinations of power groups to explain a complex non-linear system veers into oversimplification. This leads to implausible claims such as “the Vietnam War was engineered by banks to profit from rising Federal deficits.”  There is exhaustive documentation of the many factors at work in the Vietnam War, and domestic banks’ profiteering from rising Federal deficits simply doesn’t make the cut as a dominant force.

Another category of simple, powerful narratives is “the big idea.” These include inflation, deflation, the conflict between labor and capital, and various aspects of systems analysis, for example, feedback loops.

But when simple stories and concepts fail to accurately account for events and fail to project reasonably accurate predictions, then we need to seek more nuanced and complex causal narratives.

Let’s take oil as an example. The global market appears to have ample supply, yet the price of oil keeps drifting higher.

The other primary narrative is supply and demand: Commodities rise when demand exceeds supply, and prices decline when supply exceeds demand.

Since the global economy is visibly slowing, demand for many commodities is declining. Though central banks are adding to money supply, this money is not flowing into the real economy, as credit and money velocity are stagnant.

These two factors are deflationary, and so the conventional expectation is for commodities like oil to decline. Oil’s price rise runs counter to both of these narratives.

Is there a conspiracy/power group engineering oil’s rise?

Various power groups – for example, the OPEC oil-producing cartel – clearly have both motivation and influence on the supply side of the equation, and government policy makers have strong incentives to control or influence both supply and demand.

Conspiracy narratives tend to overlook the conflicting incentives and agendas of competing Elites. Some power groups may benefit from rising oil prices, for instance, while others use their influence to lower oil prices. Competing Elites muddy the explanatory power of conspiracies.

Why is oil rising?  The conventional narratives fail to account for this trend. They also lack predictive value, as repeated calls for oil to reverse have been mooted by oil’s uptrend. For reasons I will explain in the next section, it is entirely plausible that oil could continue to rise, despite slackening end-user demand and deflationary stagnation in the global economy.

Such a continued rise in the price of oil would eventually push all commodities higher, even in the face of slackening demand, as producers would have to pass higher production/transport costs on to end buyers. This is why spikes in oil prices correlate to recession. As costs rise while wages remain stagnant, households and enterprises have less discretionary income to spend and invest.

With producer prices up 2.5% over the past year, the trend of higher oil costs leading to higher production costs already seems evident.

Since the conventional narratives fail to account for oil’s price advance, we must seek a new narrative.

Oil is the Super-Commodity because it underpins the entire industrial economy. Coal and natural gas are used to generate electricity, but transport and the petrochemical industry are still largely fueled by oil.

This is the basic reason why recessions follow spikes in oil prices. When oil costs rise, costs increase throughout the economy without offering any additional value for the higher prices. Higher oil costs act as a tax that transfers wealth from consumers to oil producers. Since consumers pay more for goods and services, they have less disposable income to spend and invest. This contraction triggers recession.

One key feature of technical analysis is that it is detached from explanatory narratives. The technical analyst doesn’t really care if the rise in price is caused by a cartel, inflation, expanding demand, or geopolitical tensions; he just sees a trend or a reversal of trend.

You have probably seen multiple versions of this chart of oil (WTIC); everyone sees the same wedge and the same technical breakout to the upside. 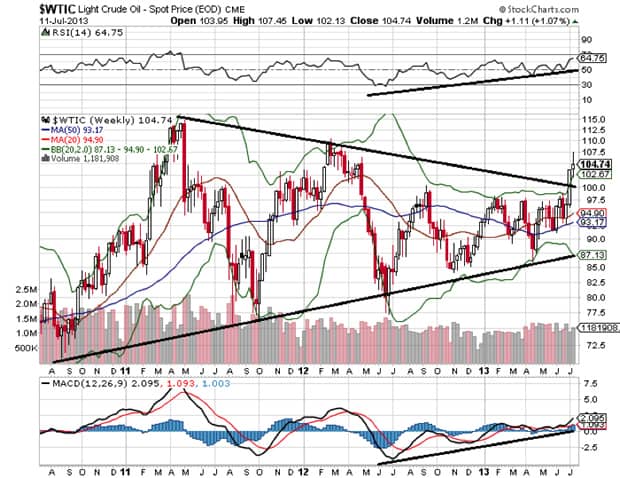 This rise in the price of oil in U.S. dollars has flummoxed everyone who expected oil to decline as global demand weakened. Rising prices don’t align with stories of a world awash in oil; clearly, the conventional supply-demand narrative isn’t capturing the key dynamics.

You have probably read the same explanations I have for higher oil prices. These include:

There is nothing new here to speak of; it has long been recognized that the energy required to extract increasingly marginal sources of oil (i.e., EROEI, energy returned on energy invested) is rising, and this naturally drives the end-cost higher. It has also long been recognized that oil exports are vulnerable to political turmoil and conflict, as oil (like all commodities) is sensitive to small increases in demand or contractions in supply.

A more intriguing dynamic has been presented by Financial Times reporter Izabella Kaminska (The Fed, QE and Commodities) over the past year: Financiers are buying oil as collateral for various speculations. Kaminska sees this financial hoarding of oil (i.e., reduction of supply) as inducing “scarcity amidst plenty.”  Simply put, financial demand is equivalent to end-user demand.

In broad terms, I would characterize this as one aspect of the financialization of commodities.

Again in broad terms, the financialization of commodities is driven by several macro factors:

What is phantom collateral?  I will offer two of many possible examples.

A sovereign bond issued by an essentially insolvent government that is propped up by the intervention of a central bank (for example, the European Central Bank (ECB) buying Spanish bonds). The bond is presented as solid collateral, but the collateral is entirely phantom. Should policy change and the ECB stop buying the bonds or even sell them, the true market value of the bond would quickly be discovered. Much of the bond’s supposed value as collateral would immediately vanish.

Consider a mortgage-backed security (MBS) held on a bank’s balance sheet at full value. Now consider what a marked-to-market valuation of the underlying mortgages would discover: Much of the value of the MBS would be revealed as phantom.

That real estate, stocks, and bonds are in varying stages of bubble-type tops is generally accepted as obvious, at least when the microphone is turned off. “Chasing yield” at the top of asset bubbles is a very risky game. Thus “smart money” seeks lower risk opportunities, either the classic “buy low, sell high” variety or low-risk carry-type trades.

The total financial wealth sloshing around the world is approximately $160 trillion. If some relatively modest percentage of this money enters the commodity sector (and more specifically, oil) as a low-risk opportunity, this flow would drive the price of oil higher on its own, regardless of end-user demand and deflationary forces.

If we grasp that financial demand is equivalent to end-user demand, we understand why oil could climb to $125/barrel or even higher despite a physical surplus.

In Part II: Understanding the Secular Shift of Capital into Commodities, we examine the impact of this financialization of oil on other commodities. With oil's recent breakout, the prices of many essential commodities (e.g., natural gas, wheat, copper, coffee) are bottoming or already entering new uptrends.

Such a financially driven rise in oil could spark a self-reinforcing feedback as others note the rise and jump into the trade. If trillions of dollars in hot money exit bonds, stocks, and overheated real-estate markets, a small percentage of that money chasing oil and other commodities would have an outsized impact on prices, which are always set on the margins.

This is how oil and other commodities could continue climbing in price even as the global physical demand slumps and more economies slip into recession as oil costs rise.