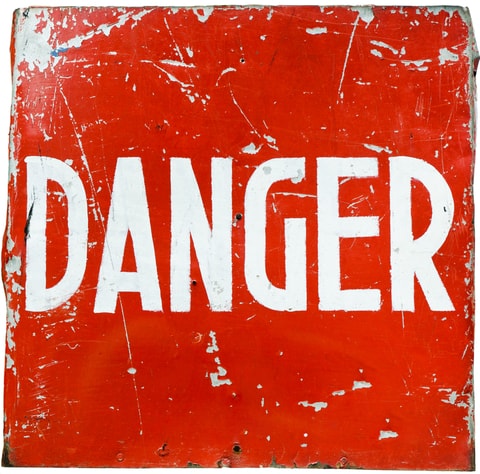 Q: How do you make a small fortune on Wall Street?

A: Start with a large fortune.

Last fall, I wrote an article titled Defying Gravity that warned of the absurd price levels that stocks and bonds had risen to.

The piece first looked at the unbroken multi-year march upward in prices through the myriad money-printing cycles of the world's central banks, as well as the near-extinction of bearish investors on Wall Street — which it then contrasted with the vast gap between valuations and the underlying weak economic data, deteriorating chart technicals, and evidence that the "smart money" was exiting the market. The takeaway? Prudence strongly recommended moving to cash and hedging one's open market positions.

Less than a month later, the stock market abruptly dropped by 7%. Those who didn't seek safety in advance were left licking their wounds, panicked not knowing if the painful down-draft was over.

Fortunately for them, the Federal Reserve jawboned it's willingness to step in further if needed, the ECB announced a trillion-Euro stimulus program, the Bank of Japan waded into domestic and foreign markets as a buyer of last resort, and China's central bank continued its staggering balance sheet expansion. Collectively, this put a floor on the markets, which soon climbed back to record highs.

Where We Are Now

So here we are roughly six months later, and the same warning bells are ringing — just louder this time.

Yes, stocks recovered from their brief October swoon, and yes, they are at — or very close to — their all-time highs. Indeed, everything is so awesome that investor sentiment has never been more positive. If you worry that having too many people on the same side of the boat is a sign of complacency and over-confidence, the following chart should frighten you:

But very importantly, the rate of increase in equity prices is changing. Specifically, it's slowing down. Prices are beginning to compress, forming a classic "wedge" which Charles Hugh Smith warns could break the relentless multi-year uptrend: 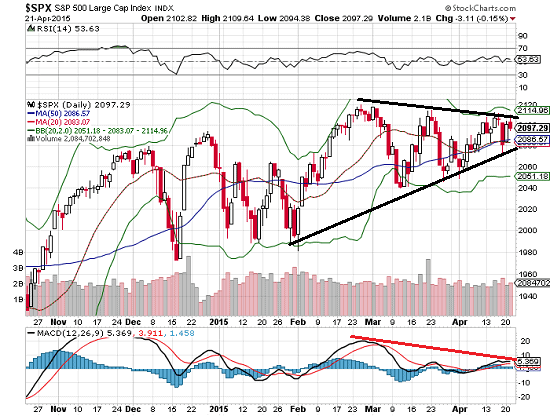 This is a dangerous sign at a time when, despite all the central bank stimulus programs raging around the world, economic growth is decelerating. Quartlery GDP growth for both the US and the Eurozone are barley above 0%, and China's recently-reported 7% growth is the lowest reported in over 24 years (and many analysts suspect this reported growth is substantially overstated). 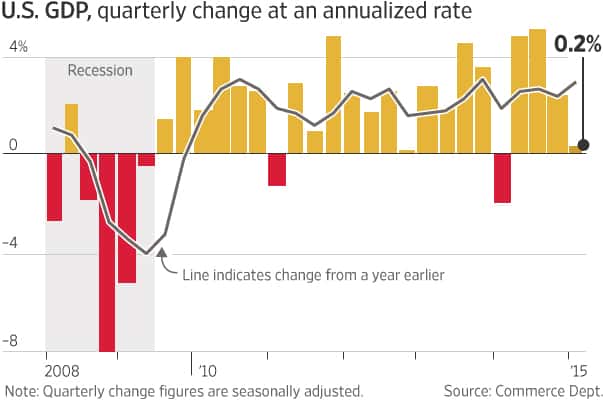 Stocks, in theory at least, should be priced based on future earnings expectations. With anemic/moribund/near-recessionary growth numbers like these, what kind of delusional drunken rantings do we need to tell ourselves to justify today's record stock valuations?

Valuations, mind you, that can change on a dime as sentiment shifts. As proof: in the past 48 hours, due to disappointing guidance, Twitter's and Yelp's stock prices have plunged 25%. And as I've been writing this piece, LinkedIn's price has fallen over 22% in the aftermarket, evaporating 2 full years of gains. 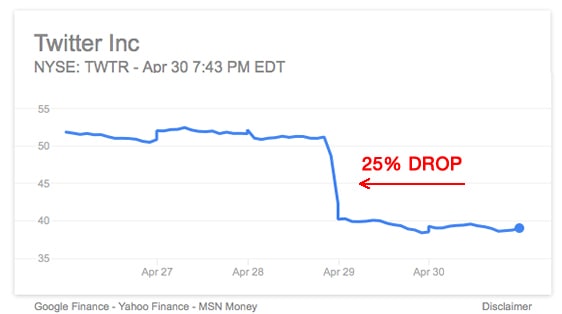 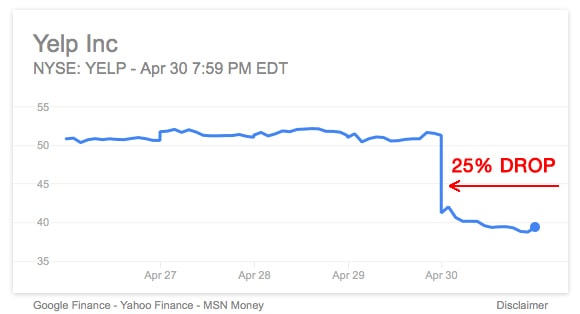 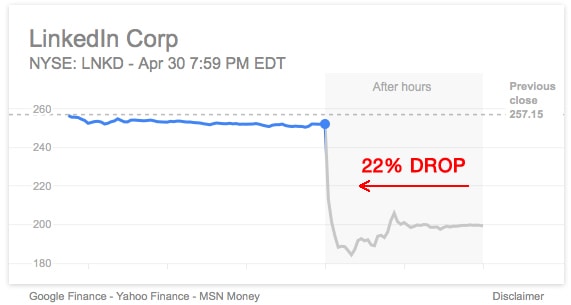 Here at Peak Prosperity, we've long forecasted that crashes happen first at the periphery where the weaker players are, and then progresses steadily inward towards the core. The high-flying, unprofitable, dubious-value social media space is exactly where we'd expect to see the early failures occur before the larger market rolls over. That may very well be what we're witnessing now.

And in the age of high-frequency trading (HFT) where the majority of trades and nearly all quotes are generated by algorithms, the speed with which prices can collapse is orders of magnitude faster than what was possible in previous eras. When the market action becomes unfavorable, algos just stop trading — within milliseconds. Since they're responsible for the overwhelming majority of trading in today's markets, price support vaporizes along with the algos. With the instantaneous disapperance of buyers, flash crashes result. HFT expert Joe Saluzzi explains this risk in depth in our upcoming podcast with him — to be released this weekend — in which he states:

The flash crash [of 2010] was caused by a poor market structure that went out of control. Where basically market makers were flipping back and forth and once their inventory positions got exhausted or their risk levels got too high, they were shutting down. And many of them were quoted afterwards explaining that they just stopped trading and exited the market. That’s why you had a flash crash: because it was a void in liquidity.

All this worrisome data reminds me of another old joke:

A terrible storm came into a town and local officials sent out an emergency warning that the riverbanks would soon overflow and flood the nearby homes. They ordered everyone in the town to evacuate immediately.

A faithful religious man heard the warning and decided to stay, saying to himself, “I will trust God and if I am in danger, I believe God will save me.”

The neighbors came by his house and said to him, “We’re leaving and there is room for you in our car, please come with us!” But the man declined. “I have faith that God will save me.”

As the man stood on his porch watching the water rise up the steps, a man in a canoe paddled by and called to him, “Hurry and come into my canoe, the waters are rising quickly!” But the man again said, “No thanks, God will save me.”

The floodwaters rose higher pouring water into his living room and the man had to retreat to the second floor. A police motorboat came by and saw him at the window. “We will come up and rescue you!” they shouted. But the man refused, waving them off saying, “Use your time to save someone else! I have faith that God will save me!”

The flood waters rose higher and higher and the man had to climb up to his rooftop.

A helicopter spotted him and dropped a rope ladder. A rescue officer came down the ladder and pleaded with the man, "Grab my hand and I will pull you up!" But the man STILL refused, folding his arms tightly to his body. “No thank you! God will save me!”

Shortly after, the house broke up and the floodwaters swept the man away and he drowned.

When in Heaven, the man stood before God and asked, “I put all of my faith in You. Why didn’t You come and save me?”

If you still have capital invested in the financial markets and you haven't started moving a sizable portion of it to safety — either into cash or positions that hedge against a correction — what additional warning signs could you possibly be waiting for?

Don't be caught waiting too long to act. Once the next correction is upon us, it will already be too late.

As we originally advised before the market drop six months ago, strongly consider moving more of your paper investments to cash for the time being. This is one of those times when the benefits of safety far outweigh the risks of speculating to catch a few more up days in the market. (Remember, the research definitively proves that we feel much greater mental suffering when we experience a loss than when we miss out on a gain)

And for any capital you decide to keep in the markets, we urge you to explore hedging those positions against a market drop.

"Hedging" is the practice of allocating a minority percentage of your investments to safer or inversely-correlated holdings relative to the majority of what's in your portfolio. So how to do you go about doing it?

In Part 2: How to Hedge Against A Market Correction, we explore the standard range of hedging techniques that are commonly used to offer portfolio protection and/or upside during a market downturn. These include raising cash, using stops, inverse and leveraged securities, shorting, options, and futures.

And for those who choose to forgo hedging, you might want to want to start donating to a wide range of churches, synagogues, temples and mosques. Like our friend in the story, when the next storm hits, divine intervention is going to be your best hope…