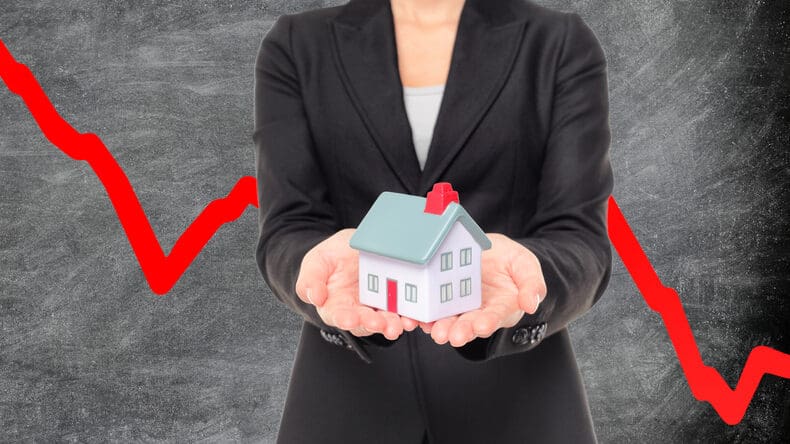 The big news of the week: on Wednesday, the Federal Open Market Committee (FOMC) announced a rate increase of +0.75% (75 bp) to 1.75%.  This was hinted at on Monday, and as per the Fed press conference at 14:30 Eastern on Wednesday, the rate increase was blamed on last week’s surprisingly hot CPI print (0.97% m/m, 11.64% annualized). It turns out, this week’s producer price index (PPIACO) looked 3 times worse (+3.03% m/m, which is 36.36% annualized). Powell told us in the press conference that another large rate increase might occur if the CPI came in with another hot reading next month.

Immediate effects: 30-year mortgage rates jumped by 50 basis points (bp) to 5.78%. We haven’t seen mortgage rates this high since 2008. I’m guessing the housing market will take a bit of a tumble in the next few months. 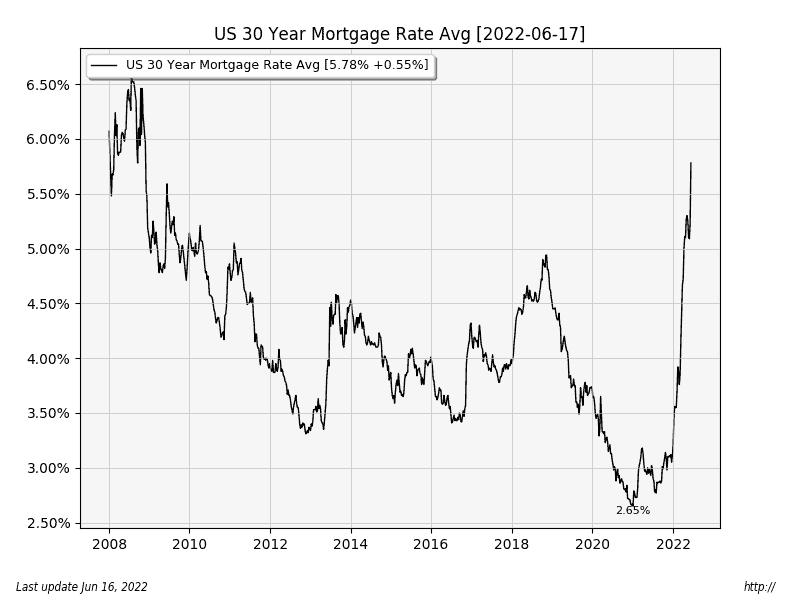 Crude fell 3 days out of 5, losing -9.72 [-8.20%], with most of the losses happening on Friday. You can see the crude OI (blue line) is at a multi-year low, which tells me that the banksters don’t want to take any large positions in crude.The banksters used to be ok with the “shorting the rallies” game (OI tops matched with price tops), but that trading game stopped in February.

The weekly candle print was a swing high/bearish reversal (64%), which is fairly bearish. Crude appears to be headed lower. 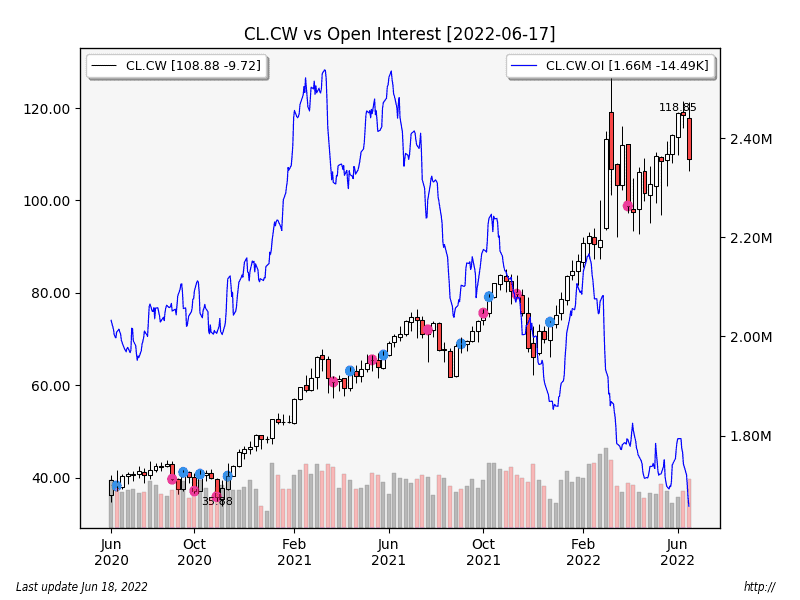 Natural gas was hit very hard, plunging an astonishing -1.78 [-20.32%], dropping to a 2-month low. Natgas also printed a weekly bearish reversal pattern (70%).  Most of the week’s losses came on Tuesday; a fire in an LNG facility took out 2% of US natgas demand. (Note: LNG = natgas-for-export, so, a fire in a US LNG facility = more natgas for U.S. Plebes, and less for EU Plebes).  The LNG facility fire actually happened last week, but the company reported on Tuesday that the plant restart would take until “late 2022.” Note: the instrument “NG” = futures for U.S. natgas. This week’s plunge is good news for US natgas buyers, and if it persists, should help U.S. inflation numbers. Eventually.

There sure are a lot of fires in plants these days. 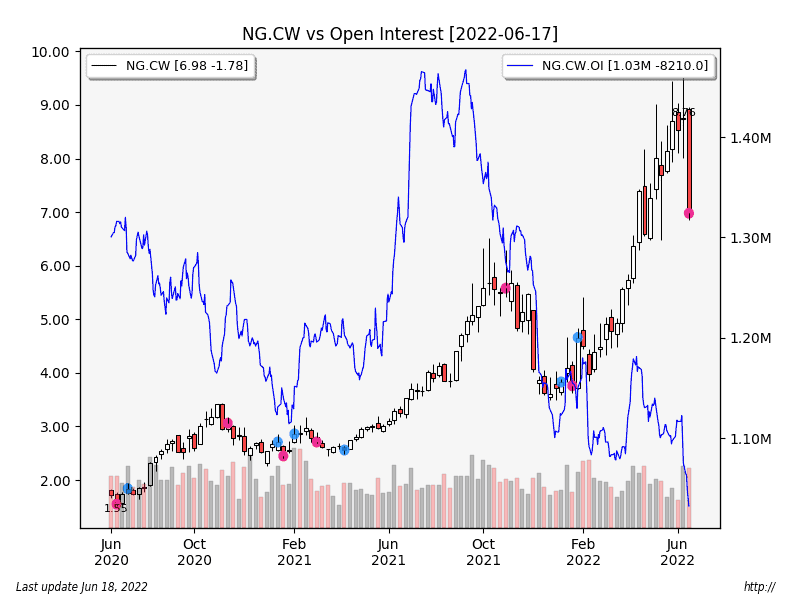 Equities also plunged, with SPX falling -5.79% to a new multi-year low. Most of the damage happened on Monday – after the Fed hinted at that 75 bp rate increase, which then came true on Wednesday. The sector map looks mixed but mostly bearish (leaders down: energy -20.71%, utilities -9.97%, materials -9.01%). Financials and tech did (relatively) well, so it wasn’t a completely bearish map. Even after all the fuss, the VIX ended the week at 31, which – given the correction in progress – really isn’t all that bearish. 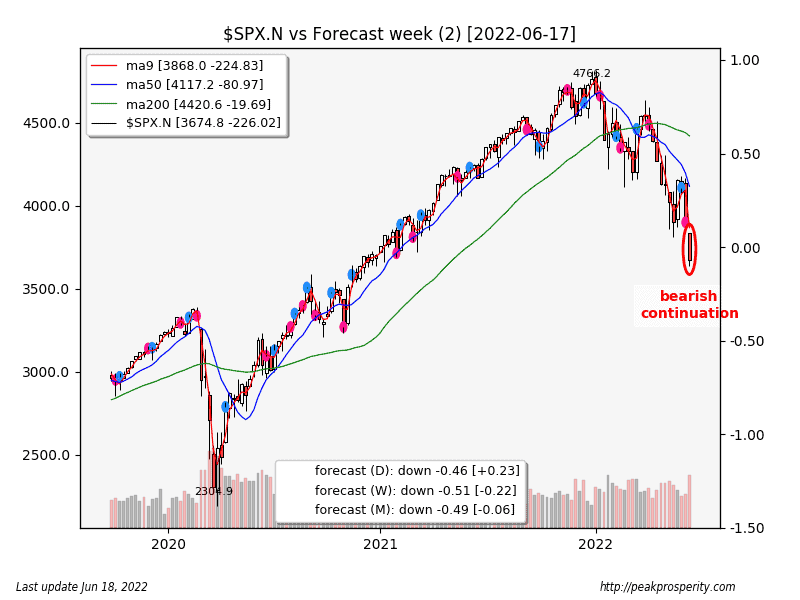 Doctor Copper also had a bad week, falling -5.84%, dropping to a new 4-month closing low. Copper dropped 4 days out of 5, with the only positive day being Fed Wednesday. Copper is more-than-hinting at a recession-to-come. That’s why we call it Doctor Copper: “I am diagnosing that the economy is catching a cold…”

Note copper prices are international, rather than being local to the U.S. Transport for copper is easy – just toss a bar into a ship or a plane, and you’re good. That doesn’t work for natgas. 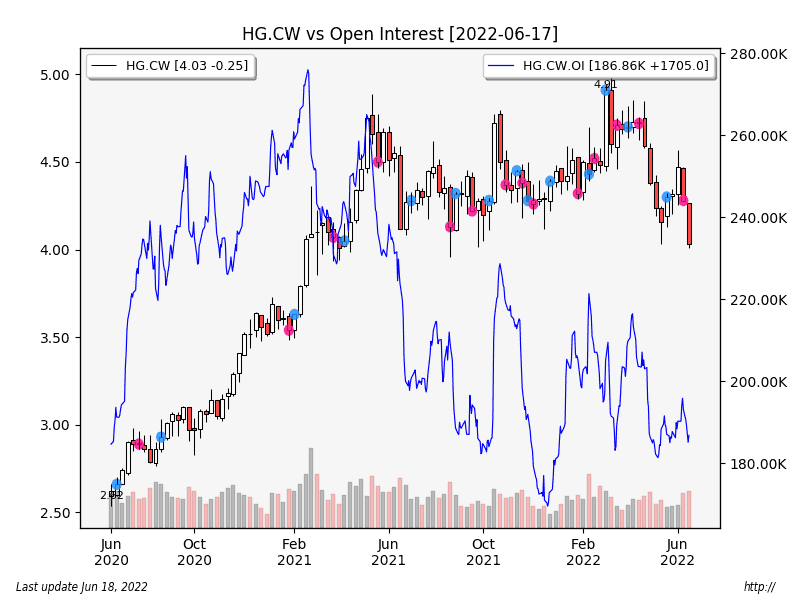 Gold was absolutely pounded on Monday, but then rallied back for much of the rest of the week, ending down just -1.64% [-30.78].  Gold’s OI, which seems to matter more for gold than for most other traded items, is hinting at a low; the falling OI suggests to me that the banksters have been closing out their short positions over the last month or so regardless of the rallies. See how – before this month – peaks in OI almost always align with peaks in price for gold?  And the valleys in OI align with the lows in price? And over the past four weeks, the OI has just been dropping, even though gold has rallied. That’s positive for gold. Probably. Eventually. Someday. 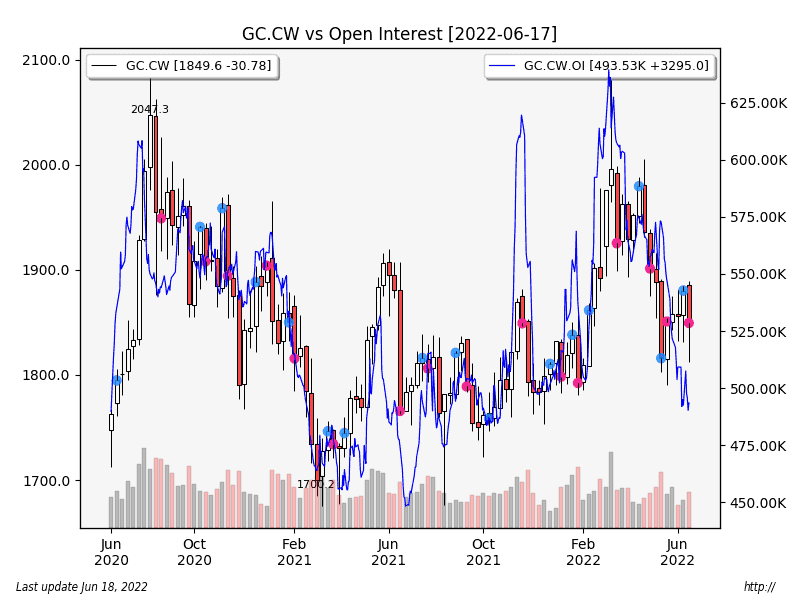 The buck rallied for the first part of the week, then fell on Thursday and Friday, ending the week up +0.44% [+0.46]. Call it mildly positive for the buck.  International capital probably likes the prospect of higher rates for their USD deposits (10-year yield +6 bp to 3.21%), but there’s that recession on the horizon also.

A dollar rally is usually a “global risk off” signal, and/or a strong rate differential between USD and the other major currencies (EUR, GBP, JPY, etc). Probably both are happening here. 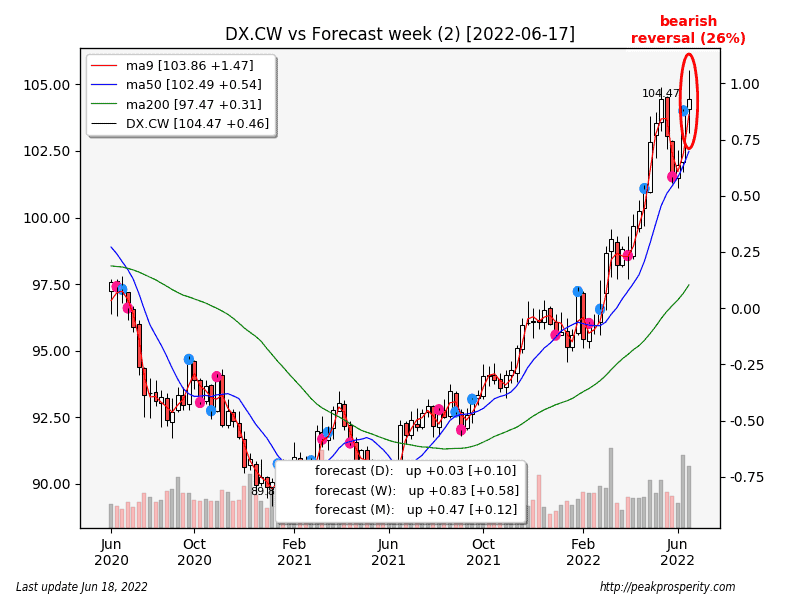 It all adds up to “hints of recession” – and due to Doctor Copper looking a little faint – not just a U.S. recession.

I also assume that Big Money over in Europe would much prefer the U.S. 1-year at 2.86%, vs the German 1-year at 0.46% – resulting in capital flows and a dollar rally. Theoretically. Assuming the EU doesn’t raise rates by 75 bp too.

Will Russia/Ukraine see negotiations relatively soon? It is hard to say. The Western Oligarchy will be dragged into the peace process kicking and screaming. Especially the U.S. The longer they put it off, the worse the terms will be.

Viewed through the lens of currency, it seems that Mister Price Hike (Putin) has already won his war, due to the destruction of the opposing military force.  Will this result in a new anti-WEF group that forms around Russia?   It seems like that’s already happening. 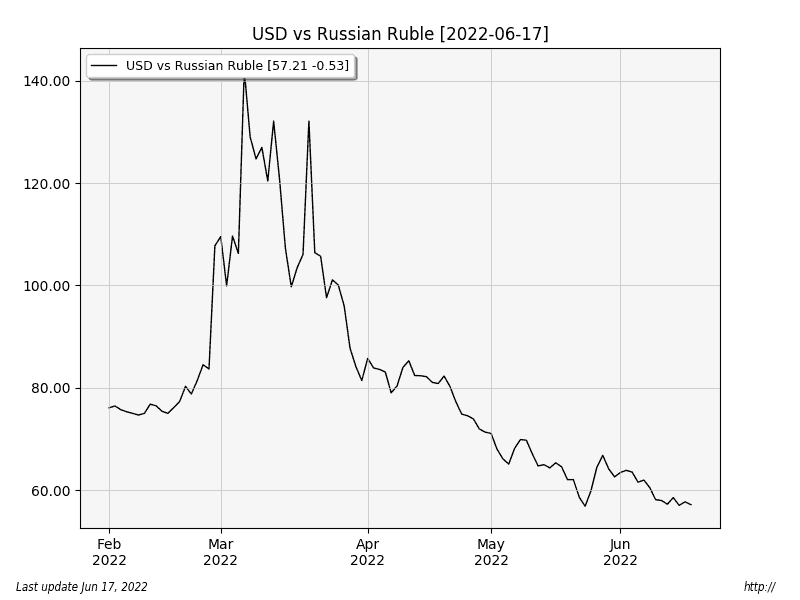 As someone who studied the cold war and geopolitics in general, the shocking ineptitude of the WEF/West in this entire affair is really astonishing. If you discard 60 years of history and experience, this is what you get. I never really quite understood how Rome fell. Now we’re seeing it happen in real time. It is due to a combination of traitors whose loyalties lie elsewhere, rank stupidity, and “the Disease of Victory”. Here’s a piece from 1968 on that same topic.

Build Back Better! Climate Change! No (food, heat, electricity, treatments, or transport) For You!