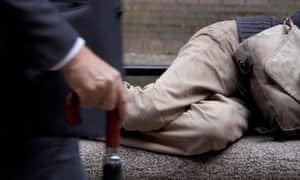 In the trailer for our recent (and excellent) webinar WTF: What The Fed?!?, I ask:

What’s it going to take for the pitchforks to come out? How much more does the common man need to be abused before he wakes up and says ‘I’m not going to take anymore!’?

As discussed in detail in the webinar, our economic and political systems have been captured by monied interests. Industry, government, markets and the judicial system all work for their benefit, not ours.

The result? An acceleration of wealth and opportunity away from the masses and into the pockets of the top 1% (really, the top 0.1%)

The public is literally being sacrificed so that a tiny number of powerful elites can enjoy “more”.

We’ve all read the articles about the dying middle class and the explosion of homelessness in recent years.

Well, I live in northern California, in Sonoma County, about an hour north of San Francisco. It’s quite pleasant up here, with lots of small farms, orchards and vineyards.

Yes, there are some rich folks here. But nothing like the rest of the Bay Area. Most families are working class.

The local economy is nothing like the Tech frenzy of Silicon Valley. But it’s better than most places in the country.

At least, it has been.

Recently, it’s become impossible not to see the signs that more and more people are falling into poverty. They just can’t afford the rising cost of living, even if they have a job.

Here where I live, nowhere is this more apparent than the Joe Rodota trail connecting my small town of Sebastopol with the nearby city of Santa Rosa. Over the past year, this previously quiet, clean, bike & pedestrian route has exploded into a sprawling homeless encampment for hundreds of dispossessed people.

Here’s a 2-minute video I took of the encampment this afternoon (h/t to my daughter Charlotte for manning the camera as I drove):

YouTube is full of similar shocking video of much larger encampments across the West Coast, from Los Angeles to Seattle. Here in the Bay Area, even our “jewel” cities of San Francisco and Berkeley are becoming overrun by an exploding homeless problem and the mental health, sanitation, addiction, safety and crime issues associated with it.

It’s a major issue with no clear fix in sight. And folks, it’s only going to get worse. Far worse.

Remember, we’re in the 11th year of the longest economic expansion in US history. The markets are at record highs. The official reported unemployment rate is at a record low.

When the next recession hits it will be like pouring jet fuel on this fire.

Homelessness in California has doubled in just the past few years and our social support systems are already overwhelmed. What’s it going to be like if mass layoffs cause the homeless population to quadruple in a single year?

I remain amazed at how difficult life is for the millions of working poor in America. What harsh conditions they suffer just to hold a job, sleep under (any) shelter, find food, and wake up the next day to do it all over again. Day after day, always worried that sickness, injury, misfortune or theft is going to jeopardize the little you have.

Once you’ve dropped into poverty, especially if you have family dependents, it is damn hard to extricate yourself from it. Regardless of how hard you apply yourself.

If you have the time, I recommend watching this 45-minute documentary on US poverty produced by a German public broadcast service. Currently more than 40 million Americans live beneath the poverty line — that’s twice as many as in 1970.

Viewing our country through their outsider’s eye is a stark warning that we ignore this metastasizing  social epidemic at our peril:

Back to my question at the start of this post: What’s it going to take?

How many more millions will fall into poverty? How much more abuse will continue until of those of us paying attention, with growing fear at the social implications and perhaps at our own financial vulnerability, actively revolt against the elite-centric status quo?

For thousands of years, history has warned us that such social imbalance will not stand:

Are we going to listen in time?