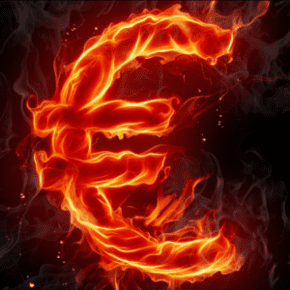 Europe Is On Fire

Europe Is On Fire

There are several hard things about this particular crisis, especially for the aware. One is the waiting for the other shoe to drop, as we all know it must. The vast imbalances that led to the 2008 crisis are mainly still intact, and in many cases are larger than they were before.

Another difficult thing is constantly reading all the horribly wrong and misleading information out there that is designed to shape opinion almost universally in the direction towards more profligacy and consumption. Statistics are constantly bent, and other bits of information running counter to the idea that a new round of robust consumer expansion is nearly upon us are conveniently buried or overlooked.

Consider this article from Bloomberg:

In a year when American companies piled up record amounts of cash, the worst stocks were the savers and the best gave the money back to investors with dividends and buybacks.

Companies that hoarded cash such as CareFusion Corp. (CFN), Western Digital Corp. and 18 other members of the Standard & Poor’s 500 Index lost an average 15 percent in 2011, according to data compiled by Bloomberg. The 40 that repurchased the most stock or offered the biggest dividends climbed 5.7 percent, led by DirecTV and Reynolds American Inc. (RAI), the data show.

Bulls say gains in companies that returned money will help unlock almost $1 trillion of cash that chief executive officers have been hoarding for three years. Thomas Lee, the chief U.S. equity strategist at JPMorgan Chase & Co., says distributions should increase 28 percent to $1.1 trillion into next year. Bears say dividends and buybacks will be insufficient to keep the rally going as mandated budget cuts curb growth.

“Investors are more yield-hungry than ever before,” said Jacob de Tusch-Lec, a London-based money manager at Artemis Investment Management LLP in London, which oversees $17 billion. “Because of the market we are in, investors have flocked to companies that are the best in the world at what they do, generate excess cash and have a proven record of returning money.”

The message here is quite clear: Companies that have cash should return it to shareholders, either in the form of dividends or as share buybacks. For good measure, a quote is found to imply that companies that do this are better at generating 'excess cash,' which would be a good thing, indeed. The underlying message is that there's cash on the sidelines in corporate coffers just waiting to be poured into the stock market so go out and buy stocks now!

The prod here is to try to get the companies that are 'hoarding' cash to cough it up and hand it out to shareholders. Which is a pretty reasonable thing to ask, assuming the basic facts are that corporations have amassed cash, have too much for their needs, and would be prudent to return it to shareholders.

But what if this view was missing a big piece of the puzzle? What if those same companies also increased their total debt loads, and instead of the cash representing superior free cash flows from their activities, the cash represented companies taking advantage of generationally low interest rates to hoard cash for tough times?

Under that circumstance, we might then say that a stock market that rewards imprudence over caution is tilted in favor of risk.

The simple and well-known fact is that corporate debt levels have outpaced the accumulation of cash, indicating that not only are companies borrowing, they are spending as well.

Since 2005, U.S. corporations have added a half a trillion dollars of cash to their balance sheets. While that sounds like a lot, they have simultaneously added more than three times that ($1.8 trillion) in debt.

Given the exposure that the debt creates, carrying large cash reserves should be viewed as an act of fiscal responsibility rather than unnecessary frugality. Sadly, like the rest of our struggling republic, many American companies are on the ropes, perhaps one good punch away from a knockout. With a high percentage of consumers and all levels of government still drowning in debt, it's very fortunate that at least one sector has cash in reserve.

To be clear, high levels of corporate debt is nothing new in the United States, where leverage has been on the rise since at least the early 1950s. But in recent years the trend has accelerated dangerously, most likely driven by the same factors that are encouraging debt in other sectors, namely a distortive tax code and artificially low and distortive interest rates.

Well, that "more than three times" greater debt accumulation is a fly in the ointment of the corporate cash-hoard story. It belies the notion that tons of free cash are available to hand out to shareholders. The funny thing about debt is that it just sits there, racking up interest, until the company either pays it back or defaults on it. That's the long and the short of that story. So companies that have piled up cash — but also accumulated debt at a 3x faster rate — may just have a very good reason for not distributing that cash in the form of dividends or share buybacks, such as being generally concerned about the long-term health of their company and the general state of the world economy.

Now all of this is not to pick on the Bloomberg story, but to use it as a metaphor for what I see going on all the time these days. Selective facts are trotted out with no concern for the (even slightly larger) context involved, and the bias is always towards creating the illusion that a recovery is right around the corner.

The story of imminent recovery is falling apart at the seams everywhere we look. Sure there are incipient signs of recovery here and there, but the main weave of the tapestry is still one of extreme weakness that would entirely tear apart with the slightest provocation.

Under the hood, I am troubled by the fact that the largest financial companies in the US are seemingly melting down like blocks of ice in the summer heat:

Today Bank of America (BAC) broke through the $5 mark, an important barrier for a major public company, and we'd do well to remember that BAC holds a bit over $55 trillion in derivatives on its books.

Now that's just the notional value of its derivatives and the general idea is that roughly 90% of that gross exposure disappears through the magic of netting the positions out. Of course, this only works if all the counterparties are solvent and available to net the contracts out, something that AIG proved to be a broken concept back in 2009.

The recent 'gains' in employment and consumer spending have come to us courtesy of some very odd statistical sleights of hand. For example, the unemployment rate fell mainly because a lot of people were dropped from the labor rolls. Too discouraged to look for work, these people no longer count as unemployed and this causes the unemployment rate to decline.

The stridency of the misinformation is a clue, and I get nervous whenever the perception management reaches this fever pitch, because it means that important information is being excluded from the conversation. Somehow this tendency leads me to have the opposite of the intended reaction and assume that things are worse than advertised, not better.

The situation in Europe is extremely tenuous, and it could literally break apart at any time. If or when it does, we all need to be prepared for extreme market turbulence, more official intervention than before (both the overt and covert varieties), the fact that certain insiders will have access to market-moving information in advance (like the tips that Paulson and the Fed handed to their former and now current colleagues), and that the dollar will probably advance during this event.

Surprisingly, it will be the dollar's advance that will force the Fed to act to save the world…er, the markets…one more time. The degree of asset correlation with the dollar is exceptionally high, and an advancing dollar will do more to pressure the world's stock markets to the downside than any other single event.

But make no mistake. The exact conditions that led to this crisis are all still in place. The pressures and fingers of instability are more numerous than before.

Where it can be difficult to maintain a constant state of vigilance for a long period of time, I would counsel everyone to use the quiet here, such as it is, to carefully continue to maneuver your wealth and physical situation towards greater safety and resilience.