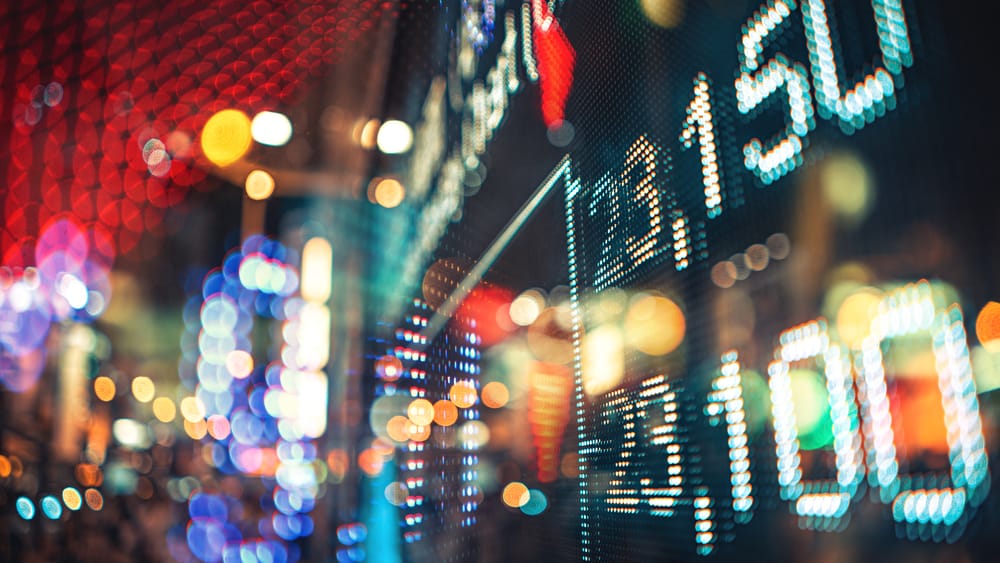 It was a mostly-boring week for economic data.

Right now, I’m looking for signs of an impending SPX correction, given the whole setup of “rising rates” right alongside higher oil prices – a re-run of 1973.  I’m starting to see the equity-market correction signals mount.

Here is something from last month: the amount of equity-market margin debt declined by -8.6 billion to $910 billion dollars.  When margin debt drops, that’s often (but not always) a precursor to an equity market correction.  The leveraged players are selling their long positions, and liquidating their margin debt.  Possibly at the top.   The drop in margin debt from December isn’t that large.  But this series is always revealed a month too late.  How much has it dropped in January? We have no idea.  The Wall Street Banksters know this information in real time.  But we don’t.  Are the decks stacked?  At the turning points – definitely. 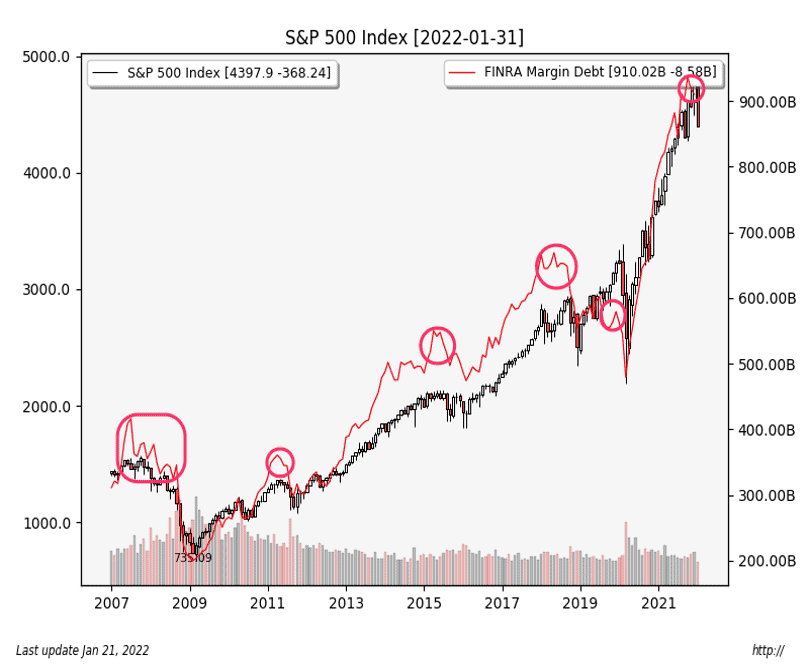 Note: the first hour of trading on Monday is typically a sucker’s bet.  Wall Street will be playing all of us. Be careful out there. 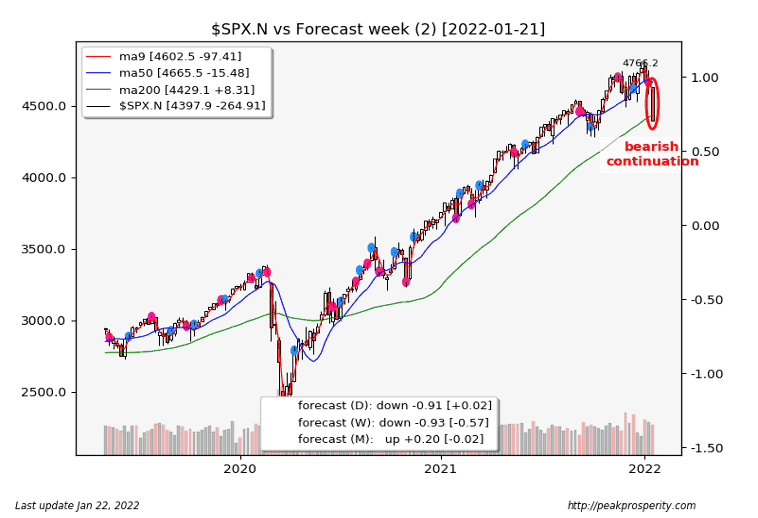 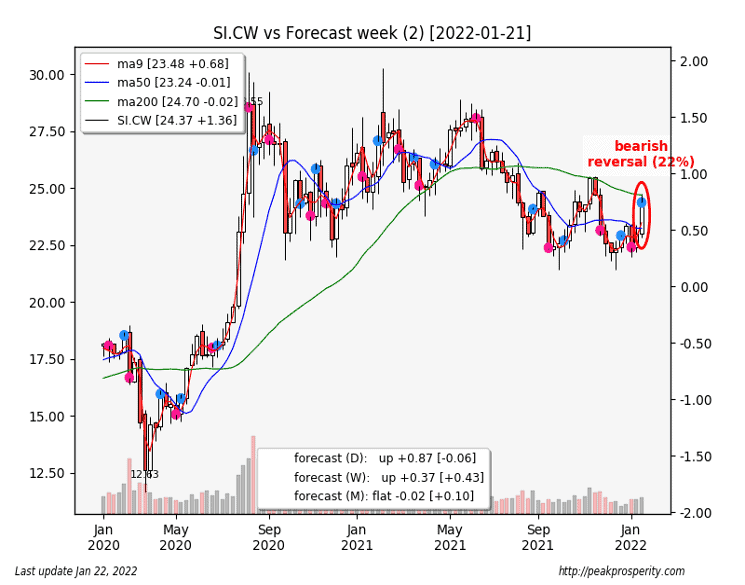 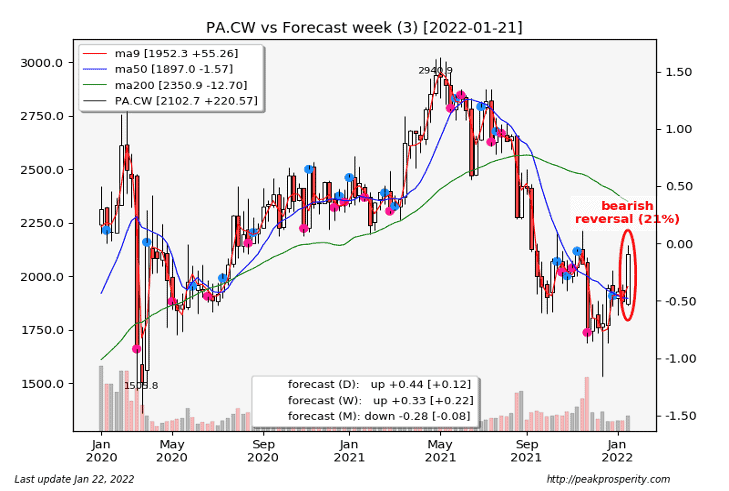 The master resource inched up to a 7-year weekly closing high this week, up +1.02 [+1.22%] to 84.73.  In spite of some selling pressure mid-week, crude remains in an uptrend – above all 3 moving averages, and it continues to look reasonably strong.  Is the uptrend fading a bit?  Crude does appear to be running into some resistance here at 85. 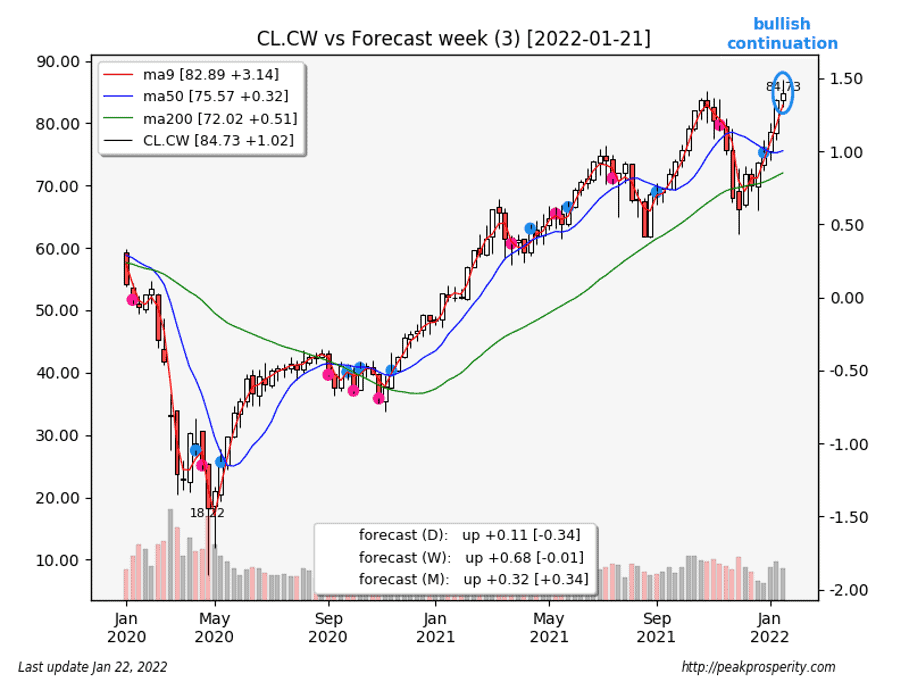 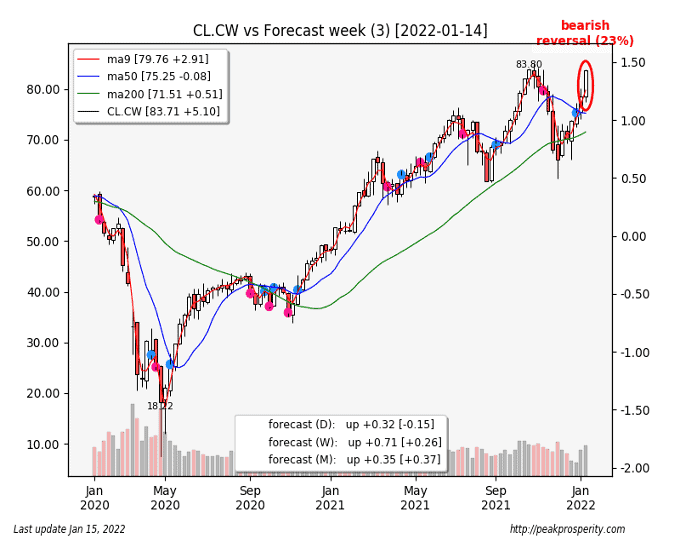 The buck recovered a bit this week – rising +0.46%, but it remains in a modest weekly downtrend. 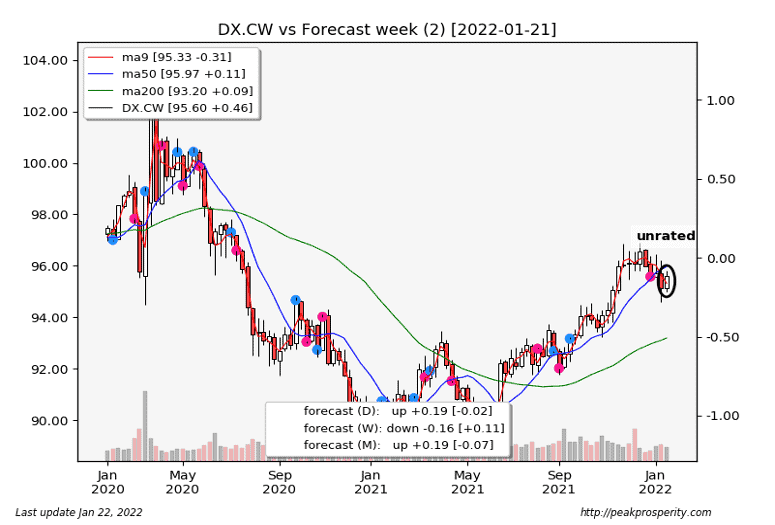 What does it all mean?

Don’t worry, I didn’t know about this either, until I checked just now. Note this lines up with last week’s “Democracy 2.0” post, where Agnew-Nixon get replaced with Rockefeller-Ford over a one-year timeframe.  That’s back when the Rockefellers were officially in government. “Rocky” even ran for President in 1960, 1964, and 1968.  Of course, the “Rockies” don’t do this sort of thing any longer. 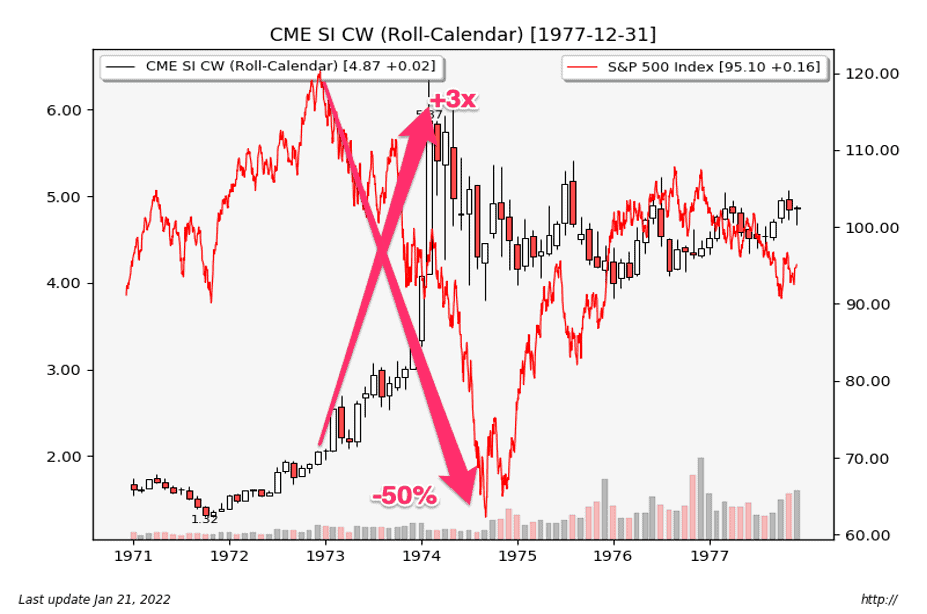 And Now, For The News Items That Caught My Eye

The Jim Crow 2.0 filibuster survived, thanks to Mansion and Sinema.  Little Known Fact: Jim Crow 1.0 was overseen by Democrats in the Old South.  But now you are a racist if you ask for ID in order to vote.  Because – POC aren’t able to obtain, or show, an ID.  Question this framing: well, you’re a racist.

That was the attempt.  It didn’t work.  Bottom line: no Federalized election rules, and no more Build Back Better.

EXCLUSIVE: Prince Andrew could be stripped of 24-hour armed security and lose his bodyguards as he is not a working royal

The Prince Andrew Epstein-Ice-Floe has been pushed out into the ocean.

CDC does not recommend general public wear N95’s, here’s why

How it is going:

Biden to give away 400 million N95 masks starting next week

Below, see how CNN is starting to fact-check Grandpa!  This, after two years of asking him what flavor of ice cream he’s eating.

Even Pope Fauci says the pandemic is ending!

EXCLUSIVE: Dr. Fauci on COVID Pandemic — “It Will End”

I think when you get a situation of more and more people getting vaccinated and boosted or unfortunately, people getting sick or getting infected, then recovering and having a degree of protection, if you combine those two, there will be enough protection in the country,” says Fauci in reference to an eventual end of the pandemic.

I have to say, after reading about this “degree of protection” from infection-recovery, I’m feeling awfully vaccine-hesitant.  Thanks anyway, Your Eminence.

And here’s one more – possibly a “root cause” of some of our current difficulty:

Klain under scrutiny as Biden struggles

As the president rounds out his first year in office with multiple setbacks in his agenda and a sinking approval rating, some blame his chief of staff.

Who is Ronald Klain

Mr. Klain’s current and previous civic affiliations include service as a member of the Board of Visitors of Harvard Law School and a Board Member of the American Progress Action Fund, the American Constitution Society, the Executive Council of TechNet, the Democracy Forward Foundation, and a member of the external advisory boards of the World Economic Forum’s Global Health Security project and the Ending Pandemics Project.

Oh look.  Attorney, and Chief of Staff Ron Klain is a star recruit from Klaus Schwab’s WEF Global “Health” Security & Ending Pandemics Project for the cognitively failing (but “fairly-elected” President) and is currently slotted in as Biden-Handler-In-Chief.  What did they call it when you worked for a foreign enemy, back in the day?  I forget.  Julius and Ethyl Rosenberg.  Didn’t they…oh never mind.  Not important.

So, if you are wondering who is the motivating force behind all the vaccines, boosters, booster-boosters, extra-boosters, mandates, and No Early Outpatient Treatments For You (but free N95 masks, tests, panic, and remdesivir-for-everyone), it was all brought to you by Ron Klain, working for Klaus Schwab, working for … the Oligarchy.

But based on the NBC article, Klain’s time as Handler-In-Chief may be coming to an end.  But don’t fret – something tells me that Klaus (and the Oligarchy) have a “book deal” for him, as a reward for his year of “service” to the American People.  Build Back Better.  Amirite, Ron?  Maybe they’ll even send him off into space!

Finally, Mercola has an article over at The Defender (talk about a pair of Mainstream Narrative Outcasts), which really lays out all the U-Turns in the recent pandemic narrative. Think of this in the context of the last two years.  Anyone have narrative whiplash yet?

CDC’s U-Turn on The Pandemic Narrative

One thing caught my eye:  “The CDC is now saying you should not retest once you’ve recovered from COVID, as the PCR can provide false positives for up to 12 weeks after the infection has been resolved.”  Oops.  Maybe this inflated the positive-test-count a teensy bit?

So … 12 weeks.  That’s unfortunate.  Say you want to take an international flight. You may test positive for 3 months following a COVID-19 infection, even when you are months past being infectious and you have no more symptoms. (This exact thing happened to a friend of mine six weeks post-Delta infection; and another friend, more recently, with Omicron). Is there a fix?  Sure you can argue with the airline.  “But the science says…”  That’ll work.  Or…

This Paper From Bangladesh

Virucidal effect of povidone iodine on COVID-19 in the nasopharynx

This study tested the effects of PVP-I on PCR-positive symptomatic COVID-19 patients.  A second PCR test was run following administration of 0.5% PVP-I.  After administration, 92.6% of these symptomatic COVID19 patients tested PCR-negative.  They used 0.5% PVP-I.  Nasal Irrigation.  Executed prior to the second PCR test.  Which mostly (92.6%) came back negative.  Effective much?

Note that nasal irrigation is also fantastic at clearing virus much more rapidly than normal, per: Choudhury and Colleagues.  That’s another study from Bangladesh.  Apparently, the poorer the country is, the smarter the doctors are. Would this work for any ILI that replicates in the nasopharanx?  An interesting question.  If only I were a doctor from Bangladesh, I might be able to answer this question for you.

Dr. McCullough, who talks about this literally every single chance he gets. And he always gives the credit to Chaudhury and Colleagues.  That’s why I like Dr. McCullough so much.  If anyone gets a COVID19 Nobel in 2022, it should be Dr. Chaudhury.  And Colleagues.  And Dr McCullough should be the man that hands it to them.  I have two family members right now that are using PVP-I on a COVID19 infection.  Early Treatment Saves Lives.

Who is Dr. Peter McCullough

If you’re going to DC, perhaps I’ll see you there!  Make sure to bring your PVP-I nasal irrigation!

Covid Declaration Backed by More Than 17,000

The over 17,000 signers of the declaration will be represented on Sunday, January 23, when Dr. Malone stands with fellow doctors and scientists on stage in Washington DC, as part of the Defeat the Mandates march Sunday, January 23, 2022. At the Lincoln Memorial, they will be joined by a wide range of featured guests for a series of inspiring talks and musical performances. Join us!