Deflation is back on the front burner and it's going to destroy all of the careful central planning and related market manipulation of the past 6 years.

Clear signs from the periphery indicate that a destructive deflationary pulse has been unleashed. Tanking commodity prices are confirming that idea.

Whole groups of enterprises involved in mining and energy are about to be destroyed. And the commodity-heavy nations of Canada, Australia and Brazil are in for a very rough ride.

Whether the central banks can keep all of their carefully-propped equity and bond markets elevated throughout the next part of the cycle remains to be seen.  We know they will try very hard. They certainly are increasingly willing to use any all tools at their disposal to keep the status quo going for as long as possible.

Whether it’s the People’s Bank of China stepping in to the market to buy 10% stakes in major Chinese corporations in a matter of weeks, the Bank Of Japan becoming the majority owner of key ETFs in the Japanese markets, or the Swiss National Bank purchasing $100 billion of various global equities, we see the same desperation. Equity prices are being propped, jammed and extended higher and higher without regard to risk or repurcussions.

It makes us wonder: Why haven’t humans ever thought to print their way to prosperity before?

Well, that’s the problem. They have.

And it has always ended up disastrously.  History shows that the closest thing that economics has to an inviolable law is: There’s no such thing as a free lunch.

Sadly, all of our decision-makers are trying their hardest to ignore that truth.

So how will all of this progress from here?

We’ve always liked the Ka-Poom! theory by Erik Janzen which we explained previously like this:

One of the models of the future that I favor is the Ka-Poom theory put out by Erik Janszen of iTulip.com back in 1999.

Basically it states that the end of a bubble era begins with a sharp deflationary event (the ‘Ka’ part of the title), but ends in a highly inflationary blow-off, (the ‘Poom’).

It’s a one-two punch. Down then up.

The reason you get the deflationary portion is simply because bubbles always burst. They are seeking a pin from the moment they are born.

The logic for the inflationary secondary reaction is that the central banks always respond to deflation with more money printing. Ironically, this is a doomed attempt to stem the damage caused by their prior money printing efforts.

So that’s what we’re looking for here at Peak Prosperity: a deflationary crunch savage enough to scare the central banks into opening the monetary spigots even wider. But this next time, we think they’ll seek to goose economic growth by giving money directly to the people as well as non-bank corporations.

And we think that deflationary bust has already begun. Our record-high stock markets simply somehow haven’t gotten the memo yet.

So that’s it: prices first go down (Ka!) and then they rocket back up (Poom!). When it's all over some years down the line, many of the world's fiat currencies (Yen, Euro, Bolivar, Real, and maybe a few Pesos and the Rupee, too) will be damaged or dead.

Dreams are dashed. And those who are mentally unprepared and emotionally unequipped will have a very hard time adjusting.

This predicted implosion has to happen. It's a mathematical result of the grave errors made by central banks and government busybodies, who mistook the low volatility and easy gains of the virtuous portion of the money printing cycle for actual success.

Goaded on by their great fortune, they simply doubled down over and over again; seeking the same bang for those freshly-printed dollars (or yen, euros, and yuan).  Of course, their efforts progressively resulted in diminishing returns. Yet they completely ignored charts like the one below, which explains much if you just stop and think about it for a couple of seconds: 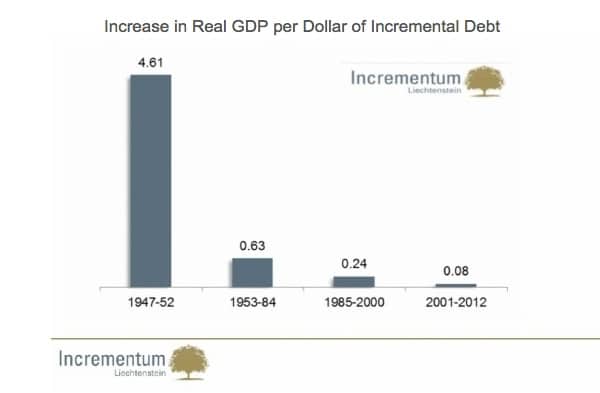 Clearly this is an unsustainable trend. What's been the response from the central banks? Why to encourage more debt, of course!  We need more GDP, they say, and new credit formation is critical to that process!

Well, what else would you expect a banker to say? Note that the central banks are deadly mute on topics like the role of cheap debt in fostering mal-investment,  to say nothing of the importance of net energy and functional ecology to the human experience.

Central planners may have a lot of power because of their access to and use of the magic printing press. But their knowledge of the real world is horribly immature, if not entirely wrong.

From The Outside In

The way things tend to work is that trouble begins on the outside and works its way towards the center. The weaker periphery elements get clobbered first, the strongest last. So it’s Greece before Spain, and Spain before France.  It’s the poor before the middle class, and the middle class before the rich.

We can already see the signs of this process in play, but it's now accelerating. 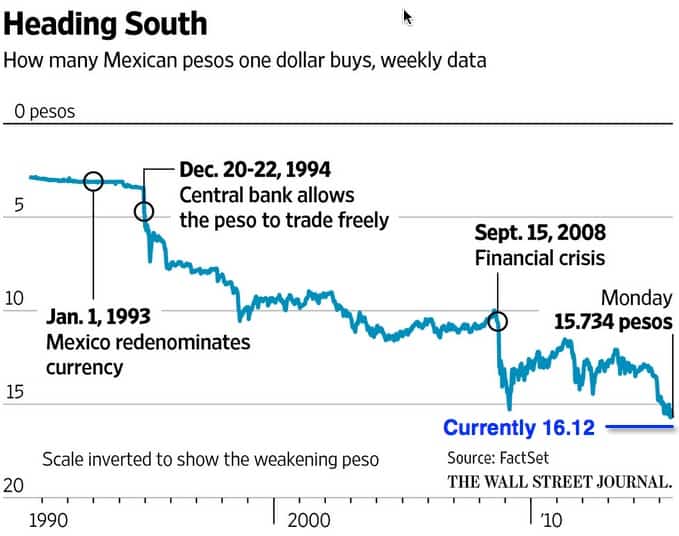 Meanwhile, the Brazilian real has declined by a stomach-churning 45% in the past 12 months versus the dollar: 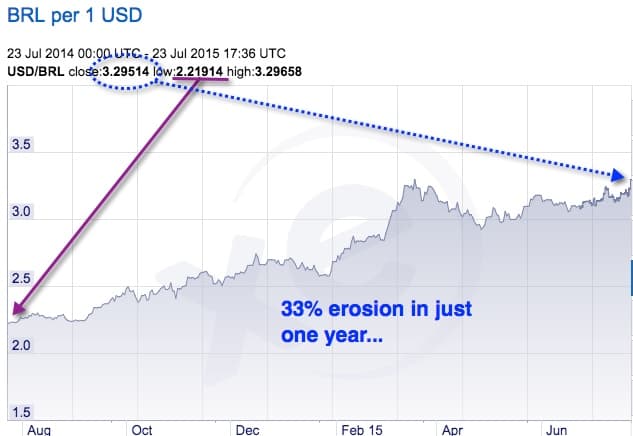 Where one Brazilian real used to be worth 45 cents a year ago, it's now worth just 30 cents. All of the hedge funds that tried to get rich off of the fat 12.5% yield that Brazilian 10-year debt offers just got their heads handed to them as a result of the plummeting currency exchange ratio.

Why is Brazil tanking so hard? It’s due to a combination of challenges: corruption scandals, poor trade prospects (as commodities collapse) and growing political risk. But the big one is that it's 'miracle' economic growth has crashed into a brick wall.

Similarly, Puerto Rico is in dire financial straits. There are huge haircuts coming for investors in Puerto Rican bonds and — like Greece — many years of economic hardship for the island's populace:

More than half of all muni bond funds have investments in Puerto Rican tax-exempt bonds, even though the sunny Caribbean island is an economic basket case. Its outstanding municipal debt of $72 billion amounts to $30,000 for each of the commonwealth’s residents, almost three times average annual per capita income. Puerto Rico’s ratio of debt to gross domestic product is more than triple that of any other U.S. state or territory, and the island’s economy has been mired in recession for nine years.

How does a small island nation even borrow 3x average annual income per capita?  It turns out it’s remarkably easy in the free-money liquidity fest offered up by the Fed.  It was only a year ago that yield starved “investors” (more properly called speculators) placed $16 billion in bids for $3.5 billion of newly issued Puerto Rican junk muni bonds.

In even worse shape is Venezuela. It's so far down the road to financial ruin that it's almost certainly gong to be the next victim of hyperinflation.

Venezuela is about to earn another ignominious distinction.

Long home to the world’s highest inflation rate, the country now is set to become the site of the 57th hyperinflation event in modern recorded history, says Steve Hanke, professor of applied economics at Johns Hopkins University. While the feat may be little more than a formality in a country where Hanke calculates annual cost-of-living increases already run at 772 percent, it’s the latest sign a debt default may be closer than previously thought.

With Venezuela’s currency losing 32 percent of its value in the past month in the black market, according to dolartoday.com, and falling oil prices throttling the cash-starved nation’s biggest revenue source, the government may run out of money to pay its debts by year-end, according to Societe Generale. Derivatives traders have ratcheted up the probability of a default within one year to 63 percent, compared with 33 percent just two months ago.

Things are about to get even more dire for the people of Venezuela.  Already suffering acute shortages of consumer staples, they're about to experience the same type of horrific monetary devaluation that Zimbabwe did.

China is anything but a peripheral country, but the import/export numbers suggest that China is slowing down hard and ripe for a crash. Instead of trying to gracefully manage its transition from an industrial economy to a consumer economy, China is simply plowing ahead following the same script that fostered its growth in the first place.

Loans are being hurriedly pushed out the door to support everything from the stock market to real estate. Despite these efforts, lots is going wrong, as evidenced by the vicious bursting of China's stock bubble and the heavy-handed government rescue efforts that have followed:

Half the shares traded in Shanghai and Shenzhen were suspended. New floats were halted. Some 300 corporate bosses were strong-armed into buying back their own shares. Police state tactics were used hunt down short sellers.

We know from a vivid account in Caixin magazine that China’s top brokers were shut in a room and ordered to hand over money for an orchestrated buying blitz. A target of 4,500 was set for the Shanghai Composite by Communist Party officials.

Caixin says the China Securities Finance Corporation – a branch of the regulator – now owns an estimated $200bn of Chinese stocks and has authority to buy a further $500bn if necessary to prop up the market.

This use of “brute force” – in the words of Peking University professor Michael Pettis – has done the trick. Equities have recovered. How could they not do so, since selling was illegal, and not to buy was also illegal?

We get the following interesting chart, from this same article which supports the idea that China’s rate of economic growth has slowed sharply and is well below the officially-stated rate of 7%: 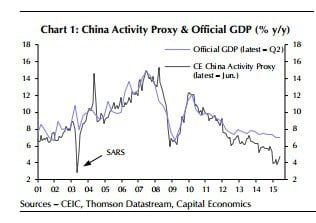 Throwing lots and lots of new money at the problem of slowing growth and collapsing equity prices is exactly backwards from what should be done.

In Part 2: Assume The Crash Position, analyzes how if deflation does indeed take over and swamp the official efforts at damage control, quite a lot of fantasy wealth in today's stock, bond and real estate markets will be destroyed. This means you want to be positioned away from risk-based financial assets right now — with stocks and low & junk grade bonds are right at the top of that list.  Cash and short maturity sovereign debt of good countries will be much better places to hang out while the storm rages.

Like it or not, things are getting interesting again. The prudent move here is to watch developments very closely, position yourself defensively, and be ready to react nimbly, if necessary. After years of suppression, the forces of reality are threatening to overwhelm our managed global ""markets"'. And it's about damn time.