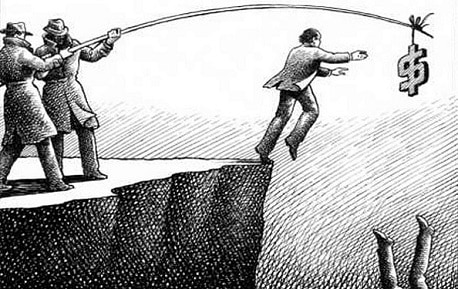 Men, it has been well said, think in herds; it will be seen that they go mad in herds, while they only recover their senses slowly, and one by one.

Like me, you may often feel gobsmacked when looking at the world around you.

How did things get so screwed up?

The simple summary is: the world has gone mad.

It’s not the first time.

History is peppered with periods when the minds of men (and women) deviated far from the common good. The Inquisition, the Salem witch trials, the rise of the Third Reich, Stalin’s Great Purge, McCarthy’s Red Scares — to name just a few.

Like it or not, we are now living during a similar era of self-destructive mass delusion. When the majority is pursuing — even cheering on — behaviors that undermine its well-being. Except this time, the stakes are higher than ever; our species’ very existence is at risk.

Evidence that the economy is sliding into recession continues to mount.

GDP is slowing. Earnings warnings issued by publicly-traded companies are at a 13-year high. The most reliable recession predictor of the past 50 years, an inverted US Treasury curve, has been in place for the past quarter.

Yet the major stock indices hit all-time highs earlier this week. And every one of the 38 assets in the broad-based asset basket tracked by Deutsche Bank was up for the month of June — something that has never happened in the 150 years prior to 2019.

It has become all-too clear that markets today are no longer driven by business fundamentals. Only central bank-provided liquidity matters. As long as the flood of cheap credit continues to flow (via rock-bottom/negative interest rates and purchase programs), keeping cash-destroying companies alive and enabling record share buybacks, all boats will rise.

So this week, the world found itself waiting for the release of the latest jobs report. And here’s how perverted things have become: investors were praying for disappointing data. They WANTED to see more warning signs of the recession threat.

Because a worsening macro outlook will make it easier for Federal Reserve Chair Jerome Powell to deliver on the future interest rate cuts investors are counting on. And rate cuts should boost stock prices higher (as well as the prices of nearly all other assets, too).

In a sane world, when signs of an approaching recession are visible, stocks and other risk assets should be nowhere near all-time highs. And should recessionary warnings mount, stocks should start diving, as recession = lower earnings + higher interest rates = lower valuations.

But in today’s bizarro world, investors pray for bad data.

One day — likely soon — investors will get exactly what they’re asking for. And when the next recession arrives in force, and zero/negative interest rates fail to stem the tide of layoffs, bankruptcies and defaults, they’ll realize too late that the trade-off of artificially high asset prices today for an eviscerated economy tomorrow was a fool’s bargain.

Like it or not, our economy and our way of life remains incredibly dependent on fossil fuels.

Given that, reason would dictate we should treat our remaining — and finite — fossil energy deposits as national treasures, to be put to the best and highest possible use, and conserved as much as possible.

But in today’s bizarro world, we instead rush as fast as we can to extract and burn as much as we can. At an economic loss.

It’s true that the decade-long shale oil revolution has yielded a staggering amount of production from America’s soils .The US accounted for 98% of global oil production growth in 2018 and is on track to hit a record 13.4 million barrels per day of production by the end of 2019.

But those volumes won’t last. As we’ve carefully explained in our Crash Course video chapter on Shale Oil, these shale basins are a short-lived bonanza given their extreme exponential decay (85% of a shale well’s lifetime output is extracted by year 3) and the fact that the most-promising plays have already been drilled. What’s left is increasingly just dregs.

But making today’s frenzied efforts to drain our shale basins even more regrettable is that we’re doing it unprofitably. We’re rushing to export our arguably most valuable national treasure and losing money in the process.

How does this serve us?

Yet another downturn could not come at a worse time for U.S. shale drillers, who have struggled to turn a profit. Time and again, shale executives have promised that profitability is right around the corner. Years of budget-busting drilling has succeeded in bringing a tidal wave of oil online, but a corresponding wave of profits has never materialized.

Heading into 2019, the industry promised to stake out a renewed focus on capital discipline and shareholder returns. But that vow is now in danger of becoming yet another in a long line of unmet goals.

“Another quarter, another gusher of red ink,” the Institute for Energy Economics and Financial Analysis, along with the Sightline Institute, wrote in a joint report on the first quarter earnings of the shale industry.

The report studied 29 North American shale companies and found a combined $2.5 billion in negative free cash flow in the first quarter. That was a deterioration from the $2.1 billion in negative cash flow from the fourth quarter of 2018. “This dismal cash flow performance came despite a 16 percent quarter-over-quarter decline in capital expenditures,” the report’s authors concluded.

They argue that the consistent failure for the sector as a whole to generate positive free cash flow amounts to an indictment of the entire business model. Sure, a few companies here and there are profitable, but more broadly the industry is falling short. The “sector as a whole consistently fails to produce enough cash to satisfy its voracious appetite for capital,” the report said. The 29 companies surveyed by IEEFA and Sightline Institute burned through a combined $184 billion more than they generated between 2010 and 2019, “hemorrhaging cash every single year.”

Rystad Energy put it somewhat differently, although came to the same general conclusion. “Nine in ten US shale oil companies are burning cash,” the Norwegian consultancy said late last month. Rystad studied 40 U.S. shale companies and found that only four had positive cash flow in the first quarter. In fact, the numbers were particularly bad in the first three months of this year, with the companies posting a combined $4.7 billion in negative cash flow. “That is the lowest [cash flow from operating activities] we have seen since the fourth quarter of 2017,” Rystad’s Alisa Lukash said in a statement.

More than 170 U.S. shale companies have declared bankruptcy since 2015, affecting nearly $100 billion in debt, according to Haynes and Boone. There have been an estimated 8 bankruptcies already this year, with some $3 billion in debt restructured.

“Frackers’ persistent inability to produce positive cash flows should be of grave concern to investors,” authors from IEEFA and the Sightline Institute wrote. “Until fracking companies can demonstrate that they can produce cash as well as hydrocarbons, cautious investors would be wise to view the fracking sector as a speculative enterprise with a weak outlook and an unproven business model.”

And if the above weren’t bad enough, when we look at what we’re doing to the natural systems we depend on to simply exist, the data is downright horrifying.

A full listing of recent depressing scientific findings would read encyclopedic. So I’ll just stick to the big picture: species extinction is happening at the highest rate ever, short of a massive meteor slamming into the planet.

The world’s plants are disappearing 500x faster than they should. The global animal population has decreased by 60% since 1970. The UN now predicts a million more species will go extinct within the next few decades.

But in today’s bizarro world, there’s a perverted incentive to sacrifice biological capital for financial capital.

The scarcer the tuna become, the higher the price the fisherman will get for his catch at market. As long as commercial demand is kept artificially boosted by central banks, the economic incentive to bulldoze the next hectare of rainforest will continue to overpower the argument to conserve it.

Whoever hooks the last tuna in the oceans will get one hell of a price for it. But tell me, what will the 8+ billion humans left on earth eat then?

Your Positive Action For The Day

If you’re a regular reader of PeakProsperity.com, little of the above comes as a surprise to you.

You’re likely very well aware of our stance that developing a more resilient way of life, of living within our financial/energetic/ecologic budgets, both as individuals and as a society, is our path out of the tremendous hole we are currently creating for ourselves.

Our book Prosper!: How to Prepare for the Future and Create a World Worth Inheriting gives specific guidance on how to actively cultivate resilience across your lifestyle. Most of you have read it.

But many haven’t. And most folks out there remain unaware of the bizarro behavior driving society’s future prospects — and the planet’s — into the abyss.

So, we here at Peak Prosperity have taken our best effort at creating a ‘comprehensive yet concise’ article designed for sharing with the friends, colleagues and family in your life whose eyes aren’t yet open to the brewing predicaments mentioned above.

Here’s the article, titled Why The Next Downturn Will Be The Most Destructive In Modern History — And Why You Must Act Now In Order To Preserve Your Wealth (and the Planet!)

Our intent is to awaken new minds to the challenges we face and instill a sense of urgency to act, but provide a ‘call to greatness’ inspiration vs a huddle-in-fear response. And, most important, our goal is to encourage folks to take at least one immediate act that will increase their personal level of resilience.

We’re circulating this article widely through all of our website/syndication/social media channels. Our ask of you today is to share it amongst any audiences you think it could benefit.

Will we awaken the majority of the masses overnight? No. But every transformative movement began with a motivated group who possessed a revolutionary way of thinking, and successfully carried that light into the world.