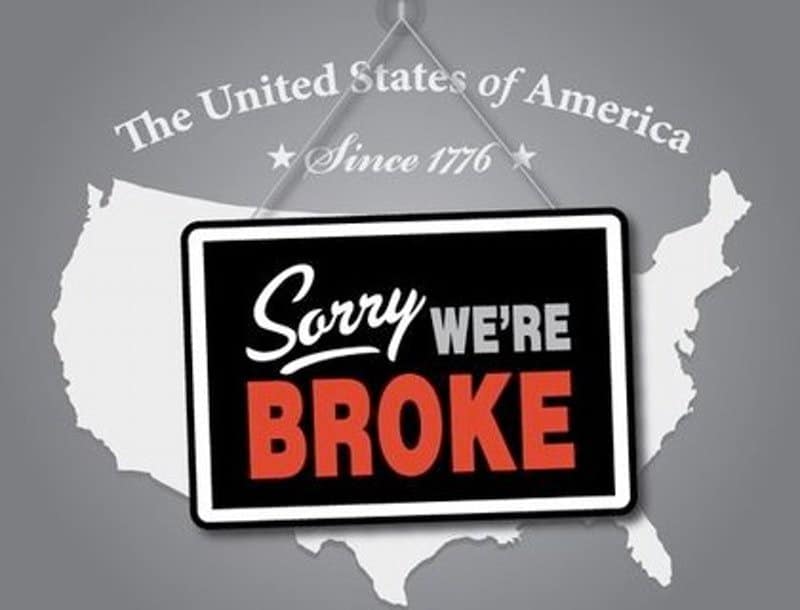 Watching the world these days, I’m experiencing the same fury that rises up from my gut when the driver in the car ahead me is weaving drunkenly, endangering everyone on the road.

Fury is a normal and rational human response when threatened with unnecessary harm. Women who are groped (or worse) by a disgusting predator like Harvey Weinstein, pensioners whose funds are stolen by Wall Street shysters, everyone who is being fleeced by corporations in search of a few extra dollars this quarter —  all have the right to be infuriated.

It’s been especially hard of late for those of us who are "reality"-based; who value data, fundamentals and historical context.

I earn my living by reading, analyzing and making sense of the world, and then working to help orient people’s actions to align with both the current reality and future probabilities. But that's become pretty damn difficult in a world where the financial markets are rigged and the main news outlets are unwilling (unable?) to cover the real issues, preferring instead to focus on distractions that mainly serve to keep us isolated and divided.

The trajectory our global society is on will not end well, and that infuraties me. And the fact that most of the coming suffering is unnecessary if only we'd make better choices — that really pisses me off.

Here's just a small smattering of the threats we've created for ourselves:

Our only option for safely navigating towards a better future is to start dedicating a huge amount of focus, time, energy and resources to addressing these threats.

We don’t have much time left to get prepared. Yes, it’s rare for things to suddenly fall apart overnight — so if you're playing the odds, we probably have a few years left before the status quo as we know it begins to break down. Maybe until 2020; possibly to 2023. But not much longer after that.

The trends are just too severe. And they're building up steam.

Setting aside for a moment the frightening ecological and energy trends, a cursory glance at the fiscal and economic data still screams: This is unsustainable!

Look at the projected deficit for the US government: 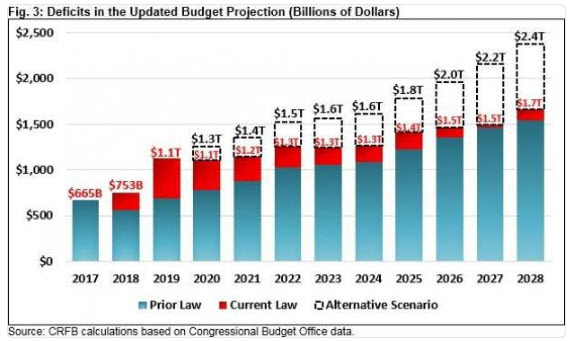 The US government is currently in fiscal tax year 2018. That means next year's projected deficit will breach the trillion mark, and things only get worse from there. By 2028 the deficit will be at least $1.7 trillion and possibly as much as $2.4 trillion.

It bears noting that current US tax receipts are just a smidge over $2 trillion. And as the chart below shows, they tend to drop precipitously during recessions: 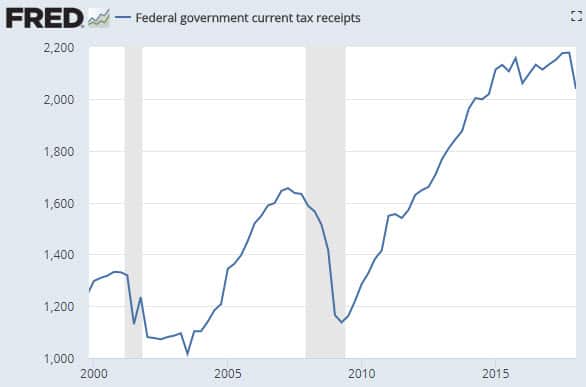 Delusionionaly, the government's projection of federal deficits doesn't include any provisions for recessions over the next decade. This is nuts; recessions are a normal and recurring part of our economic system.

And due to the Federal Reserve's tinkering to control the business cycle by replacing it with a credit cycle, the next recession is likely to be a doozy — because when credit cycles burst, they are immediately and powerfully contractionary.

So it’s not at all unthinkable that at some point between here and 2028 the US government will find itself borrowing more than 100%(!) of tax receipts in a given year.

That, my friends, is an express ticket to Venezuela-style insolvency.

But wait, there's more. Two other very much out-of-control elements exacerbating these fiscal deficits will be rising interest costs and Social Security. 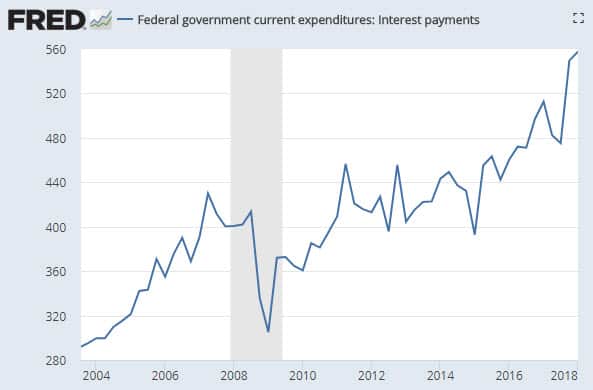 Interest payments are already 25% of tax receipts and are certain to climb as the US federal government tacks on another $13 to $17 trillion in additional debt over the next ten years. Or possibly nearly twice that if a severe recession comes along, as is highly likely.

Under the best scenario (“only” $13 trillion) and assuming a very generous average rate of interest of 3%, that will result in some $400 billion of new, incremental yearly interest payments by 2028.

Social Security Reserves Are On Their Way To $0

Social Security is now in a cash deficit.

It's drawing down its “trust fund”, even though this "fund" doesn't have any actual money in it (just IOU’s from the US Treasury). Put simply, every time the SS administration draws upon the trust fund, it hands some of those IOUs to the US Treasury in return for cash.

And how does the US Treasury get that cash? That’s right: by issuing more debt.

As we can see in this next chart from the SS administration, nearly $3 trillion will be required over the 2018 to 2032 period. After which point, the SS trust fund reserves are gone: 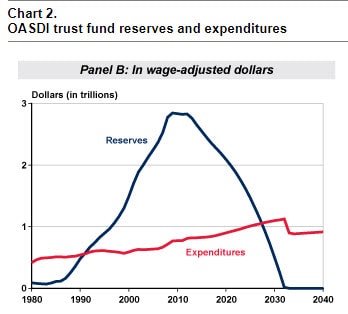 NOTE: we will be going much deeper into these kinds of data at our Summit in New York City with David Stockman on Sep 16, 2018. As former head of the Office of Management and Budget under President Reagan, David has a near-unparalleled command of the vulnerabilities of the US economy and financial markets, as well as what likely repercussions their failure will bring. To learn more about that event, click here.

By Definition, This Will End

All of the above is simply an exercise to show that just when looking at the US economy alone — forget about the issues facing other countries and accelerating depletion of key resources (soil/aquifers/fossil fuels/pollinators/etc) around the world — the current trajectory is entirely unsustainable.

Meaning it must someday end. Whether that will manifest in a sudden castrophe, or in a drawn-out crescendo of accumulating crises, who knows?

But what won’t be happening is “more of the same”. Or a straight-line continuation of business as usual.

I can make the same trend extrapolation arguments for water aquifers and glacial flows serving billions of people. And with soil loss, and oceanic dead zones, and oil production.

None of this is sustainable.

This existential threat to our safety is the root reality, whether we're conscious of it or not, underlying why so many of us are feeling infurated these days.

And while that fury often takes a partisan bent, our predicaments have nothing whatsoever to do with any particular political party. All are the same when it comes to fostering business as usual. All are identical in their support for endless growth. They merely argue over which misguided steps to take in pursuit of those doomed goals.

As the video below explains, everyone buying into the false 'left vs right' framing is being manipulated. Just as two rats in a cage, shocked by an unseen scientist, will direct their anger at each other, oblivious to the true assailant:

The Elites Are Already Making Preparations

The sheer obviousness of our collective predicaments combined with the near complete absence of any collective conversation about them is infuriating.

Worse, the powers that be are very busy propping markets in order to send the signal that “all is well” when everything is very much not well. Far too many people fall for this deception for my comfort.

As we can plainly see in the data presented above, the US is now utterly insolvent and headed towards bankruptcy. Most other nations are just as bad off, or worse. All are pursuing the same insane, impossible policy: Grow exponentially. Forever.

Which makes the current crop of politicians and monetary authorities no better than heavily-intoxicated truck drivers, drunkenly weaving their gigantic rigs in front of your family's car. Their recklessness to everyone else's well-being is infuriating.

The few paying attention, like you, can see that all of this falls apart sooner or later. The critical question to ask ourselves is: What should we prioritize doing now, in advance of the reckoning?

That's the question an increasing number of elites are asking themselves. Yes, these are the people controlling the system today and benefitting the most from it, usually at our expense. But they can see that the racket they're running has an expiration date. And they're extremely worried about the hell that may break loose when it arrives.

You may have read some of the recent news stories about billionaires drawing up emergency plans for the social disorder they fear will erupt when the status quo breaks down. I can tell you from first-hand experience these stories are true. We've had a number ultra-wealthy individuals and families approach Peak Prosperity for consultations on the same topic.

In Part 2: The Rich Are Planning For Catastrophe, we explain what the wealthy are doing and what frightens them the most. Like them or not, these people have access to the best information and the most resources with which to take action. We'd be foolish not to pay attention to what they're planning for and how they're planning for it.

Time is short. The elites are making their own preparations. Be sure to get your own in place soon.