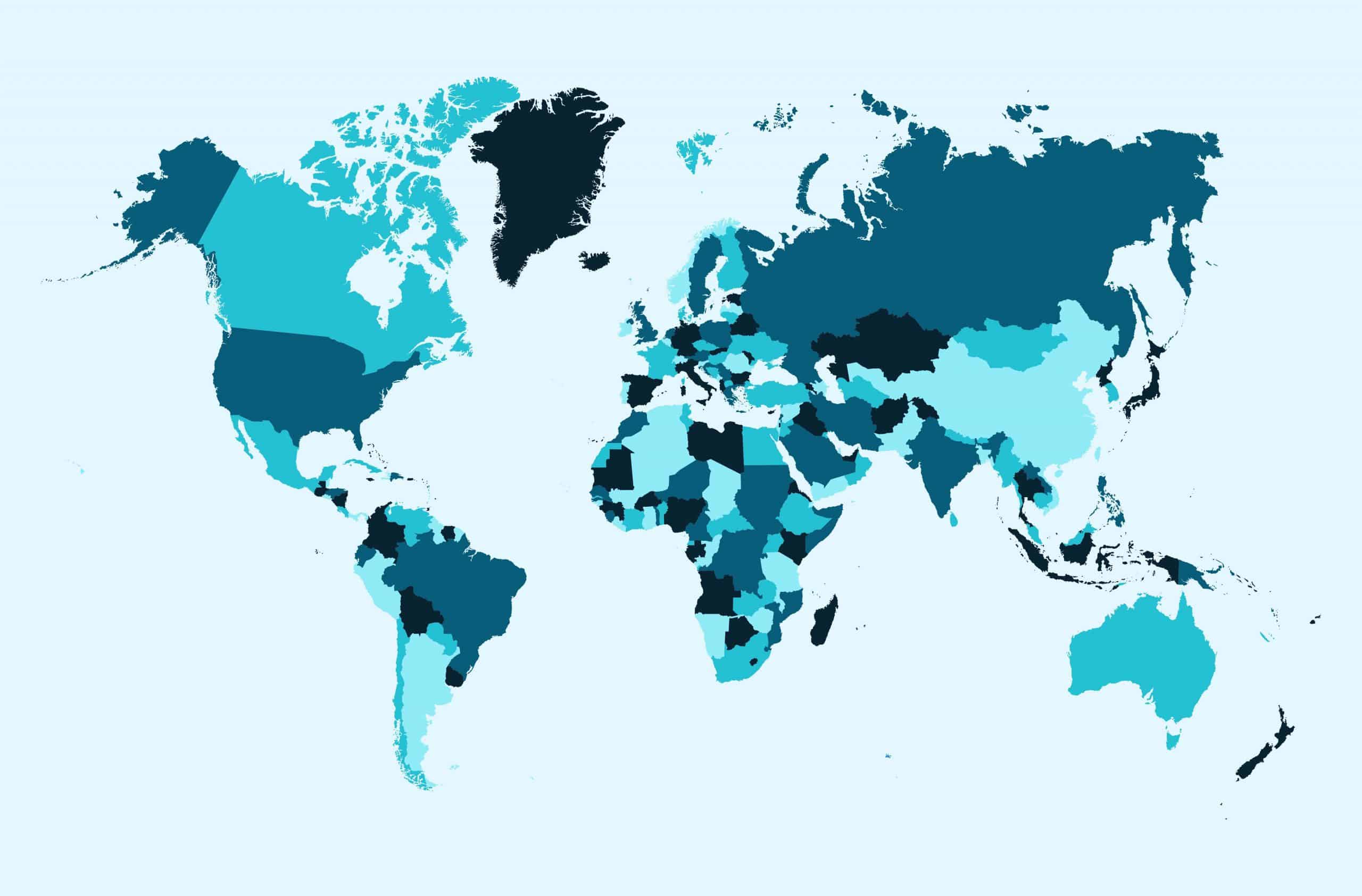 Which Countries Will Be Tomorrow’s Winners & Losers?

Which Countries Will Be Tomorrow’s Winners & Losers?

The dictum “demographics is destiny” proposes that all the complexities of finance, society and politics are ultimately guided by demographics: the relative size of each generation, birth rates, death rates, etc.

The influence of demographics isn’t limited to pension costs. Some analysts have made the case that oversized generations of young men align all too well with the launching of wars.

The point is that birth/death rates—low and high–have consequences that impact national destinies for decades.

Another school holds that geography is destiny: if a nation’s geography is favorable, the barriers to prosperity and stability are low, while the barrier is high for nations with unfavorable geography.

Peter Zeihan, author of the 2014 book, The Accidental Superpower: The Next Generation of American Preeminence and the Coming Global Disorder, lists the core geographic attributes that are either favorable or unfavorable in ways that influence a nation’s long-term prosperity and built-in geopolitical challenges.

What does geography have to do with prosperity, stability and geopolitical risks?

Natural barriers to invasion such as oceans, deserts and mountain ranges dictate whether a nation must spend heavily on military defense of the homeland or whether the cost of defense is lightened by favorable geography.

Zeihan extends geography into the political realm, noting that nations with difficult-to-defend borders require a strong central government to organize taxation and defense, while nations with few contiguous threats (for example,  the U.S.) can be governed in a more decentralized fashion.

Nations with no navigable rivers or deep-water ports are cut off from the wealth-creating potentials of low-cost sea trade, while nations with excellent natural ports and a seafaring tradition have an enormous advantage: consider Portugal, which established trading centers in India and Asia in the 1500s once its explorers rounded Africa, and England, which rolled up Portugal’s chain of wealth-creating trading network into its Empire in the 1700s.

Zeihan notes that while Africa has 16,000 miles of coastline, it only has a dozen continental bays worthy of port construction.  Other places are blessed with a wealth of natural bay: Texas alone has 13 world-class deep-water ports (the map shows 17 ports total.) 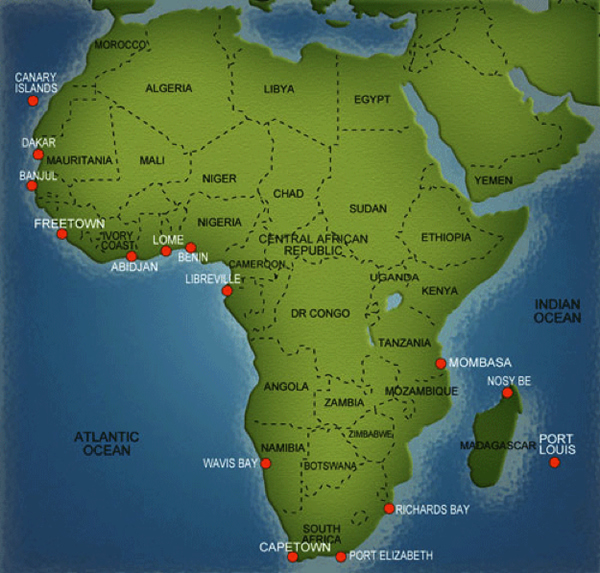 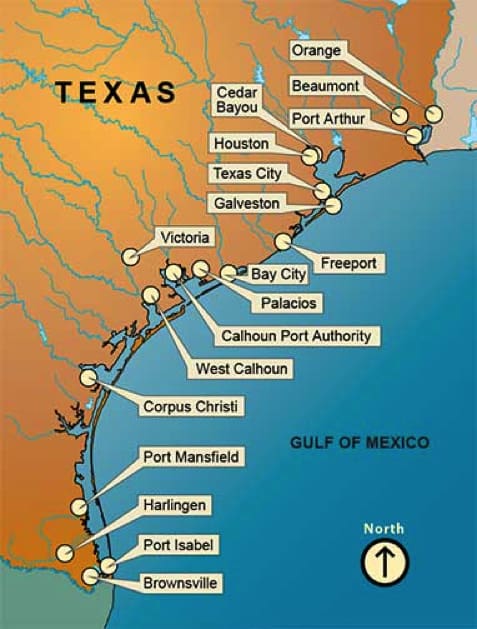 Nations surrounded by flat steppes and numerous potential enemies have a much more difficult challenge defending their territory than nations ringed by oceans, deserts or mountains.

One of Zeihan’s examples of the benefits arising from natural defenses and navigable rivers is ancient Egypt. Surrounded by deserts on the east and west and forbidding terrain to the south, Egypt did not have to invest heavily in defense and was thus free to devote its surplus labor and wealth to monumental building projects.

Moving all the needed materials, workers, food, etc. hundreds of kilometers was made possible by the Nile.  The geography was favorable to stable civilization: it was easy to travel within Egypt but difficult for invaders to reach it.

If we consider resources such as coal, oil, metal ores, timber, rich agricultural soils, etc. as part of geography, those natural sources of wealth and energy dictate whether nations must buy essential commodities from others or whether they can produce surpluses that can be sold to others.

All this boils down to capital: which geographies lend themselves to capital surpluses that can be invested in high-growth industry and technology, and which geographies make transport, defense and the purchase of essential commodities permanent burdens that soak up much of whatever capital is generated.

If we think about it, it turns out capital is also one of the primary dynamics of demographics: nations with a massive generation of retirees supported by a dwindling generation of workers are drained of capital by the high costs of pensions and healthcare for the elderly.

Countries with a large and highly productive young cohort of workers supporting a small generation of retirees can save and invest the surplus capital being generated.  If this capital is invested in productive assets such as technology and innovation, the nation’s wealth expands.

Demographics and geography are destiny largely because they define cost structures and capital flows: if costs are high—from the burdens of transport, and defense and imported essentials, or from caring for a large cohort of retirees, or both—there will be less capital available to invest.

In this circumstance, the nation lacks internally generated capital to grow, and its sluggish economy is unlikely to attract foreign capital seeking a high return on investment.

There’s a positive feedback loop between high growth that attracts foreign capital and trade and favorable demographics and geography: favorable demographics and geography enable high capital accumulation and investment, which then supercharges technological advancement and capital-producing industry and innovation, all of which makes that favored nation attractive to foreign capital, which enables more investment in productive assets, and so on.

Meanwhile, nations with high costs and low capital accumulation due to unfavorable demographics and geography will suffer low rates of growth which make them unattractive to foreign capital, leaving them capital-starved.

The Impact of Culture on Demographics

Before modern medical advances, birth and death rates were largely dictated by surpluses or shortages of food, epidemics and war. In today’s world, cultural and political systems influence birth and death rates.  Japan’s low birth rates do not result from a shortage of food, and the decline of longevity and birth rates in Russia following the collapse of the Soviet Union were not the result of famine but of political instability.

Studies have found that high birth rates decline as the educational and work opportunities for women of child-bearing ages increase.

Broadly speaking, demographics is no longer driven by feast or famine, but by cultural, economic and political dynamics such as educational opportunities for women, political instability and the cost of raising children.

Geography has a hand in these dynamics. Societies with unfavorable geographies may struggle to maintain surplus capital and political stability. The culture that arises in such challenging circumstances may be conservative, hierarchical and fear-based as a response to the proximity of numerous enemies and shortages of essentials. Innovation may be viewed more as a threat than an opportunity. All these traits inhibit experimentation, flexibility, innovation and risk-taking—all the essential ingredients to rapid expansion of capital and prosperity.

Did Nature and Culture Already Pick Tomorrow’s Winners and Losers?

Where does this lead? If geography and demographics have already defined which nations will be attractive to capital and most likely to accumulate productive capital in their domestic economy, and those nations that will struggle due to high costs and low rates of capital investment, in effect Nature (geography) and Culture (demographics) have already picked tomorrow’s winners and losers.

As individuals, we may harbor strong biases about which nations we want to see falter and which ones we want to see prosper. But as investors, we must strip away our political opinions and biases lest they interfere with our primary job, which is to preserve whatever capital we’ve accumulated.

In Part 2: And The Winner Is…, we examine Zeihan’s conclusions about who wins and who loses in the next 25 years, and add our own analysis and conclusions.