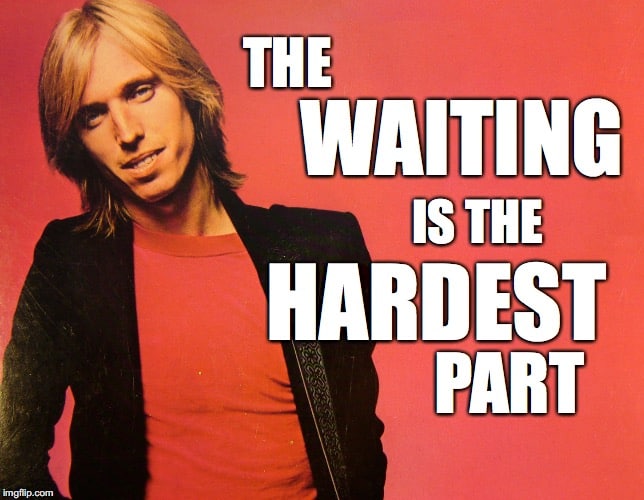 The Waiting Is The Hardest Part

The Waiting Is The Hardest Part

Man, what an awful stretch of events.

When I penned last week's article on tragedy, little did I expect something as horrible as the Las Vegas massacre would immediately follow. And nearly lost in the headlines was the untimely passing of rock legend, Tom Petty, one of my all-time favorite musicians. Sure can't wait for this week to be over…

In memory of Tom, I've been listening to a lot of his and the Heartbreakers' best hits. The lyrics to one song in particular, The Waiting, well-captures an important message today's investors should take to heart:

The waiting is the hardest part
Don't let it kill you baby, don't let it get to you

Those waiting for the financial markets to experience some sort (any sort!) of pullback have been waiting a long, looong time. How long?

Or, to put it visually:

The stock market is now 70% higher than it was at the previous bubble peak immediately preceding the 2008 Great Financial Crisis.

Reflect for a moment how painful the crash from Oct 2008-March 2009 was. How much more painful will a crash from today's much dizzier heights be?

Prudent investors have asked themselves that very same question as the markets have become increasingly overvalued over the past 8+ years. Many of them — myself included — concluded that the future risks greatly outweigh the prospect of future returns, and pulled much of their capital out of the markets onto the sidelines. And since doing so, many of them — again, myself included — have watched prices climb higher and still higher again.

It's understandable to feel great frustration both at the irrationality of today's market prices and at the emotional sting of missing out on the gains they've been delivering to those who have blithely remained long.

But it's very important to remember we've been here before many times throughout history (and pretty recently when reflecting back on the Tech and Housing bubbles). While today's levels are at a historic extreme, markets have always swung from periods of overvaluation to undervaluation — and then back again.

During the peaking process, the siren call to join the party is incredibly hard to resist. Waiting out the irrational exuberance leading up to a market top is painful. Profitable returns are everywhere. How can you turn down making such easy money?

As Tom Petty sympathized: The waiting is the hardest part.

But the disciplined few who can wait out the mania of a bubble become the big victors once it pops. Capital that they've held in reserve as "dry powder" can suddenly purchase assets at half (or even less) the prices they commanded just months earlier. This has happened in (recent) living memory: the S&P 500 lost 50% of its value between its 2007 high and its 2009 low.

So the big question to ask yourself is: Do you have the fortitude to endure the wait?

I ask myself that a lot. Because "doing nothing" is hard. Especially when listening to the gloating of those enjoying the returns on their portfolios, unconcerned and uninterested in any warnings the fundamentals might be waving.

But I draw strength to remain committed in my course from several areas. One of them involves an argument made by Peak Prosperity's resident technical analyst, Davefairtex, who posits that a successful investing strategy can involve just a single move every half-decade or so:

In my opinion, the market has always been a skimming machine that funnels money and wealth from the many into the voracious maws of the few.  Here's the intro of a book written in 1940.

Once in the dear dead days beyond recall, an out-of-town visitor was being shown the wonders of the New York financial district. When the party arrived at the Battery, one of his guides indicated some handsome ships riding at anchor. He said,

“Look, those are the bankers’ and brokers’ yachts.”

“Where are the customers’ yachts?” asked the naïve visitor.

Hussman offers a methodology to keep "the customers" from repeatedly getting their pockets picked.  He uses a very long term "10 year expected returns" calculation to show if the market is expensive or cheap.  Right now: expected return for the next 10 years is about 0%.  Message to "the customers": don't freaking buy!

As a charter member of the "customer" group, you will need to stay away from the market for many years if you use this metric.  As a reward, you won't suffer the 40% drawdowns and sell at the bottom, and you will have the opportunity to buy low – right down there at the bottom when fear is at maximum.  Everyone will think you are stupid for years at a time.  You will miss out on years of ponzi and have to endure years of worry.  You will not have very much company to make yourself feel better.

Good news is, you'll only need to make a decision once every 4-6 years.

Can you do it?

For those curious to see for themselves what the Hussman chart Dave refers to looks like, here's the most recent version, which now predicts a negative total average return for the next 12 years: 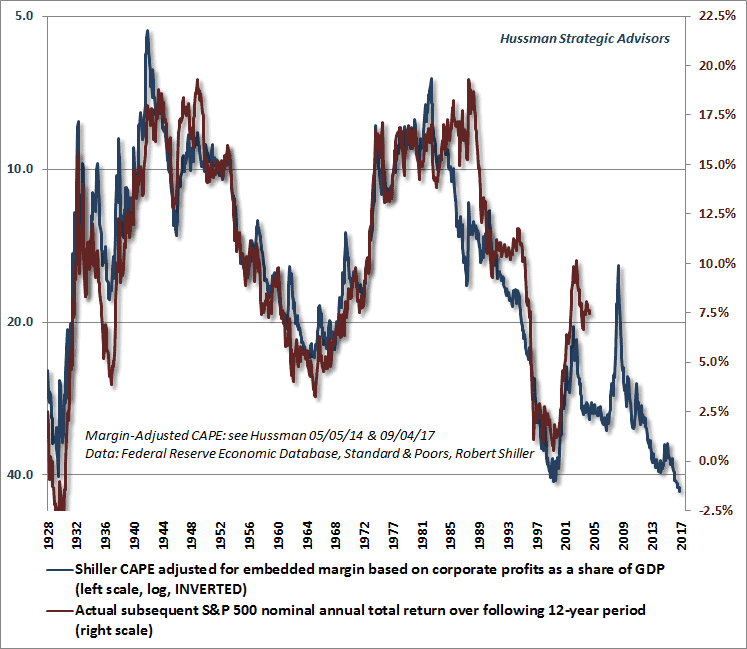 I like Dave's direct challenge of "Can you do it?". Do you have the emotional fortitude to resist the allure of easy returns when the market is delivering them week in and week out? Can you resist the very human urge to try to "beat the market" in any given year, and instead simply wait for the obvious periods of undervaluation that indicators like Hussman's chart above will identify for you? And if you can, will you have the iron stomach to deploy your capital at those times, when everyone else is decrying their losses and claiming the market is a death trap?

I aspire to answer "Yes!" to each of those questions. I think many of you reading this do so, too, which is why I'm sharing all this. I find it helps tremendously to be reminded of the fundamental reasons why we are choosing safety today in order to enjoy opportunity tomorrow. And to know that you're not alone in your stoic discipline.

Also, there *are* valuable actions we can take today while we wait for the market to re-adjust.

One is to take good care of your capital while you're keeping it on the sidelines. I've written in the past about the insultingly-low interest rates (e.g., 0.06%) offered by savings accounts at most banks these days. There are ways to get 15-20x higher return on your cash savings with no loss of safety or lengthy tie-ups. Ask your professional financial advisor for a range of such options — or schedule a free discussion with our endorsed advisor, who will detail the solutions they recommend (including several of which you can do on your own).

Another is to educate yourself on which indicators (like Hussman's expected returns chart above) to track to monitor where we are in the boom/bust timeline. We discussed a number of those in last month's excellent Dangerous Markets webinar with Grant Williams and Lance Roberts (if you haven't already watched it, you really should). But we're really going to dig deep into which key data to monitor at our upcoming Peak Prosperity summit in New Orleans on October 27th. Join us there if you can.

And last, remember that besides Financial Capital (aka 'money'), there are seven other Forms Of Capital that require an equal degree of your attention. Growing your wealth balance in each one of them is every bit as important as your financial net worth.

Tom was right: The waiting is the hardest part. Best we use that time as wisely as we can.