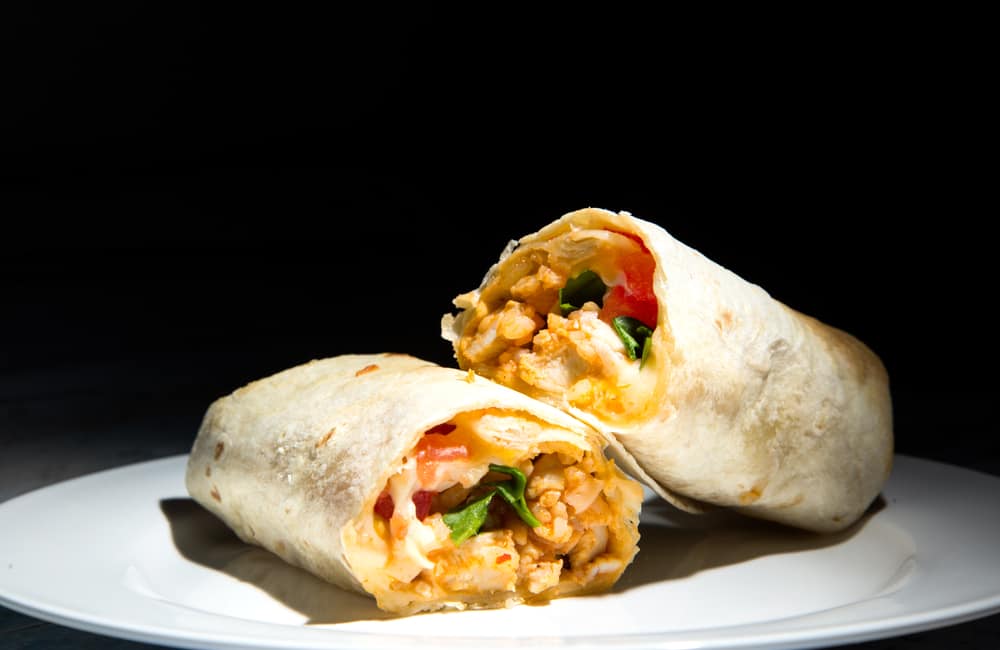 The Burrito Index: Consumer Prices Have Soared 160% Since 2001

The Burrito Index: Consumer Prices Have Soared 160% Since 2001

In our household, we measure inflation with the "Burrito Index": How much has the cost of a regular burrito at our favorite taco truck gone up?

Since we keep detailed records of expenses (a necessity if you’re a self-employed free-lance writer), I can track the real-world inflation of the Burrito Index with great accuracy: the cost of a regular burrito from our local taco truck has gone up from $2.50 in 2001 to $5 in 2010 to $6.50 in 2016.

Since 2001, the real-world burrito index is 4.5 times greater than the official rate of inflation—not a trivial difference.

Between 2010 and now, the Burrito Index has logged a 30% increase, more than triple the officially registered 10% drop in purchasing power over the same time.

Those interested can check the official inflation rate (going back to 1913) with the BLS Inflation calculator by clicking here.

My Burrito Index is a rough-and-ready index of real-world inflation. To insure its measure isn’t an outlying aberration, we also need to track the real-world costs of big-ticket items such as college tuition and healthcare insurance, as well as local government-provided services. When we do, we observe results of similar magnitude.

The takeaway? Our money is losing its purchasing power much faster than the government would like us to believe.

Comparing Burritos to Burritos: A Staggering Divergence of Reality and Official Inflation

According to official statistics, inflation has reduced the purchasing power of the dollar by a mere 6% since 2011: barely above 1% a year. We’ve supposedly seen our purchasing power decline by 27% in the 12 years since 2004—an average rate of 2.25% per year.

But our real-world experience tells us the official inflation rate doesn’t reflect the actual cost increases of everything from burritos to healthcare.

So let’s play Devil’s Advocate and suggest that these extraordinary increases are limited to “food purchased away from home,” to use the official jargon for meals purchased at fast-food joints, delis, cafes, microbreweries and restaurants.

University of California at Davis:

That’s an increase of 145% in a time span in which official inflation says tuition in 2015 should have cost 25% more than it did in 2004, i.e. $7,105.  Oops—the real world costs are basically double official inflation—a difference of about $30,000 per four-year bachelor’s degree per student.

Here’s my alma mater (and no, you can’t get a degree in surfing, sorry):

University of Hawaii at Manoa:

Sure, some public and private universities offer tuition waivers and financial aid to needy or talented students, but the majority of households/students are on the hook for a big chunk of these costs. And remember that many students are paying living expenses, which doubles the cost of the diploma. 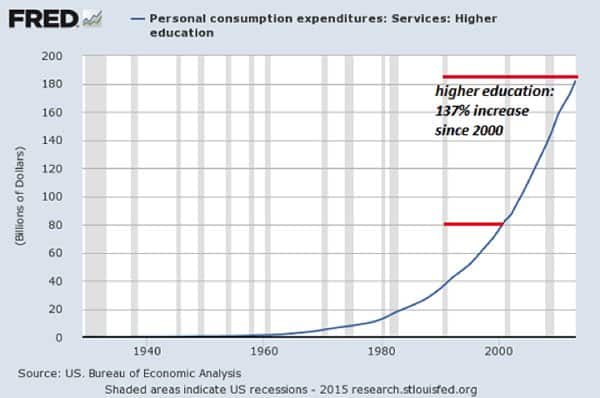 If you think I cherry-picked these two public universities, check out this article:

So the divergence between real-world costs and official inflation isn’t limited to burritos; it’s just as bad in items that cost tens of thousands of dollars.

The Official Fantasy of Hedonic Adjustments

In the official calculation of inflation, hedonic adjustments offset soaring costs: that 160% increase in the cost of a burrito is offset by the much lower cost for computers, especially when the greater processing power and memory are accounted for.

The problem with this is sort of calculation is that we have to eat every day and we have to pay higher education costs if we want our kids to remain in the middle class, but we only buy a new “cheaper” computer once every few years, and we don’t even have to buy new clothing at all, given the proliferation of used clothing outlets, swap meets, etc. (I do my annual clothing shopping at Costco: two pair of jeans for $15 each , one pair of shoes for $15, etc.)

The savings on $100 of new clothing per year or a $600 computer every three years does not offset the doubling or tripling of costs for items we consume daily or big-ticket essentials such as higher education, rent and healthcare.

Official inflation also assumes that consumers will actively substitute a cheaper alternative for whatever is soaring in price. If a burrito doubles in cost, then the consumer is supposed to buy a banh mi sandwich instead. (Oops, that doubled in price, too. So much for substitution gimmicks.)

The problem is pretty obvious: there are no alternatives for big-ticket essentials. There is no “cheaper” substitute for a four-year public university diploma or meaningful healthcare insurance. There is also no alternative to renting a roof over your head if you can’t afford to buy a house (or don’t want to gamble in the housing-bubble casino). 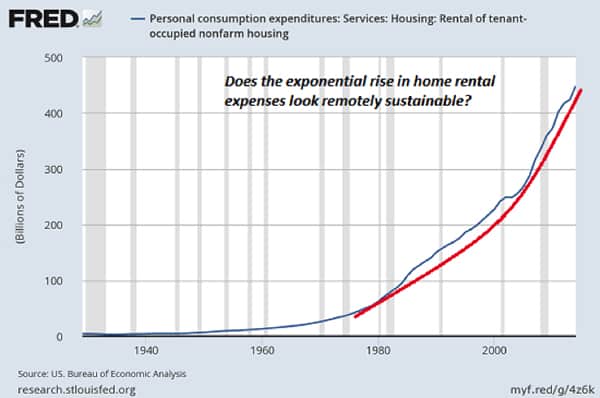 The scale of the costs matters. If I bought a burrito every working day (5 per week, with two weeks of vacation annually) for four years, that’s 250 per year or 1,000 burritos over four years. That’s one-tenth the cost of a university degree—assuming I can get all the classes needed to graduate in four years.

I can always lower the cost of lunch by making a peanut-butter-and-jelly sandwich at home rather than buying a burrito for $6.50, but there are limited ways to reduce the cost of a public university, which is already the “cheaper” alternative to private universities.

Even stripped-down healthcare insurance has soared in multiples of the official inflation rate.

Inflation in big-ticket items adds up to tens of thousands of dollars—costs that can’t be offset by choosing a cheaper mobile phone, cheaper clothing  or substituting a peanut butter sandwich made at home for a burrito at the taco truck.

Even if you skip buying lunch for four years, you’ve only offset 1/10th of the cost of a university diploma, a four-year stint in which the student lives at home and also eats peanut-butter-and-jelly sandwiches every day for four years (at least in in our barebones example of books, tuition and fees only, no dorm or university-provided food expenses).

As for healthcare: feast your eyes on this chart of medical expenses. 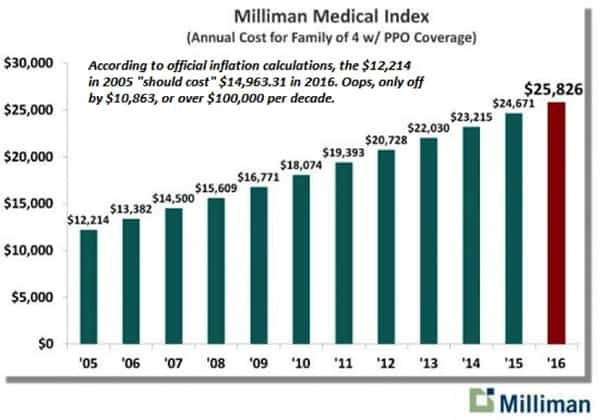 So if a household’s income kept up with official inflation over a decade, that household would have to earn at least $20,000 more per year just to keep pace with real-world, big-ticket cost increases.

That’s the problem, isn’t it? If the household’s wages only kept up with inflation, there isn’t another $20,000 a year in additional income needed to pay these soaring big-ticket costs. So the shortfall has to be borrowed, burdening the household with debt and interest payments for decades to come, or the kids don’t attend college and the household goes without healthcare insurance. 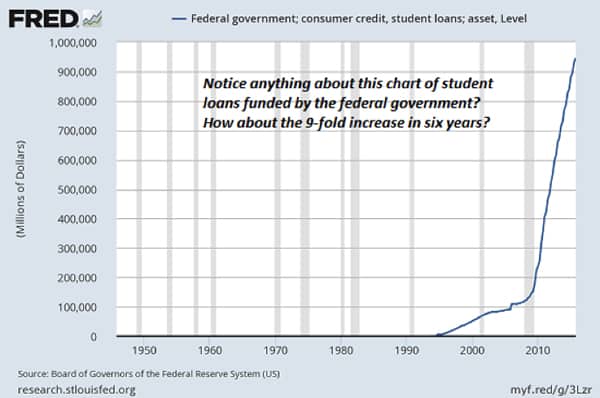 I’ve done some real-world apples-to-apples  calculations on our household’s costs of healthcare insurance, which we buy ourselves without any subsidies because we’re self-employed and we earn too much to qualify for ACA/Obamacare subsidies. (I would have qualified easily for the subsidies due to low earnings for the 20 years prior to Obamacare, but weirdly, as soon as ACA passed my income increased. Go figure.)

We’ve bought our stripped-down healthcare insurance from one of the more competitive non-profit providers, Kaiser Permanente, for the past 25 years. We’ve had the same plan (no meds, eyewear or dental coverage, and a $50 co-pay for any visit) for the entire quarter century. (Our plan is now grandfathered; the ACA equivalent is more expensive.) To keep the comparisons apples-to-apples, I compared identical coverage for the same-age person from year to year.

Last but not least, let’s look at a government-provided service—weekly trash pickup.  Since 2011, our trash fees have gone up 34.5%, compared to the official reduction in purchasing power of 6% since 2011.

Once again, real-world costs have soared at a rate that is almost six times higher than the official rate of inflation.

The reality is real-world inflation in big-ticket essentials is crushing every household that doesn’t qualify for government subsidies of higher education, rent and healthcare.

In Part 2: How To Beat Inflation, we examine a number of strategies for offsetting the soaring costs of everything from burritos to healthcare — with particular focus on the investments and actions you can take today, inside and outside of the markets, to preserve the purchasing power of your wealth from the nefarious "stealth tax" placed on your money by the kind of inflation discussed above.