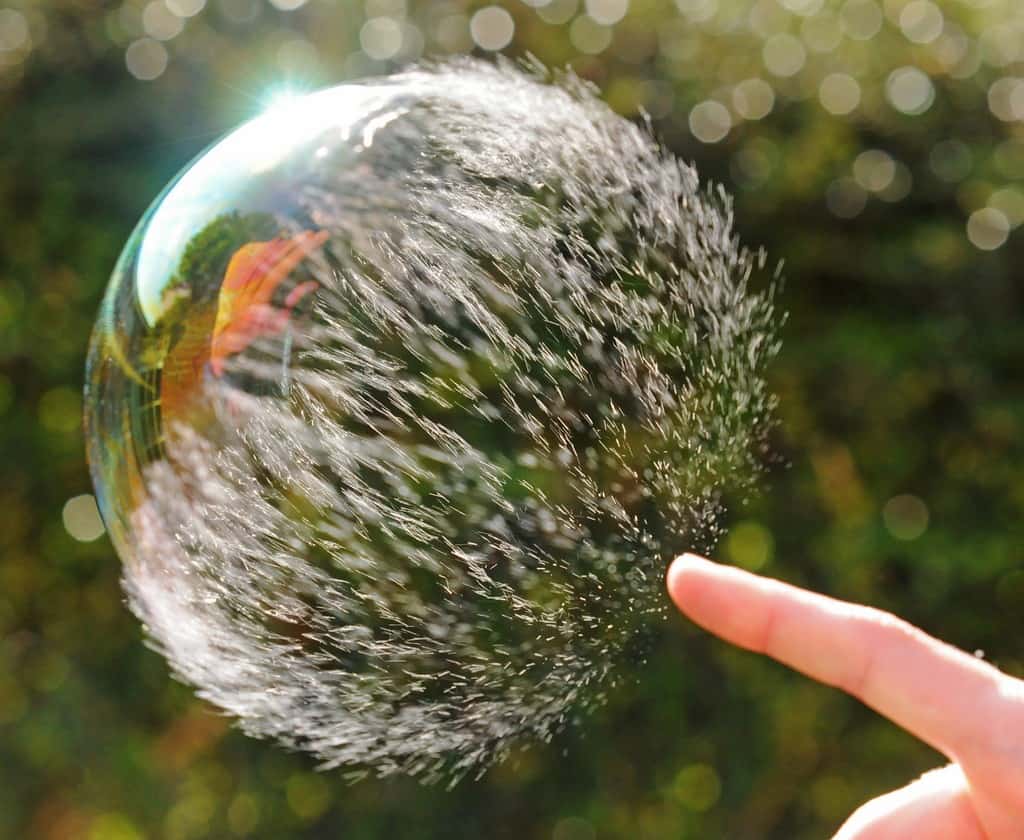 The laws of physics are governed by cause and effect. But there can exist a time lag between the two.

Note how the speed of both the bullet and the retracting latex far exceed that of the shockwave or gravity on the water contained inside each balloon.

There’s an observable time lag during which the globe of previously-contained water momentarily hangs there in space.

Then, a beat later, it’s obliterated.

Originally created in 2008 and updated in 2014, it lays out the macro forces driving the economy and our way of living, explaining why most of them are unsustainable and headed for trouble. That then opens the door to an avalanche of critical questioning about what the future will bring.

Updating the parade of charts and data has been eye-opening for me. When I last did this (early 2014), the S&P had just returned to the same price level that served as the apex for both the 2001 and 2008 market bubbles.

I remember how concerned I was then. How could we have returned to such reckless exuberance so quickly after the pain caused by the Dot-com bust and the Great Financial Crisis? Did we learn nothing from our previous (and recent!) excess?

Clearly not only did we not learn; we didn’t give a crap. With a “hold my beer, you ain’t seen nothin’ yet” bravado, we proceeded to DOUBLE the S&P above the previous bubble highs.

Here at PeakProsperity.com, my co-founder Chris Martenson and I have spilled a lot of ink in the ensuing years, warning how QE (aka central bank money printing), stock buybacks, and record low interest rates have pushed the degree of systemic unsustainability to Bizzaro-world levels. For our most recent analysis, click here, here and here.

But the TL;DR version is succinctly captured by the chart below:

A few important things to note beyond the colorful editorial commentary I added to John Hussman’s quality work here.

First, the chart is logarithmic. The y-axis value doubles with each hashmark. Meaning: the current excess is a lot more extreme than it looks at first glance.

Second, the vertical lines indicate ‘dispersions’ which are market conditions Hussman finds are highly-correlated with “steep and rather abrupt market plunges, often representing the first leg of a more extended collapse”.

Notice how rarely they have occured over the past 25 years, and yet they’ve suddenly increased in frequency of late (the most recent took place on Nov 20th).

This is what you would expect to see from a dangerously over-extended system, where prices have been propelled way beyond where they can be sustainably supported. Keep in mind, today’s all-time high prices are occuring at a time when:

As we covered in a recent report The Phantom Mania, there’s simply no substance underlying this latest run in stocks. It’s all been driven by multiple expansion, which is a fancy term for “paying more for the same dollar of earnings”, aka, speculating that you’ll be able to sell at a higher price to an even greater fool: 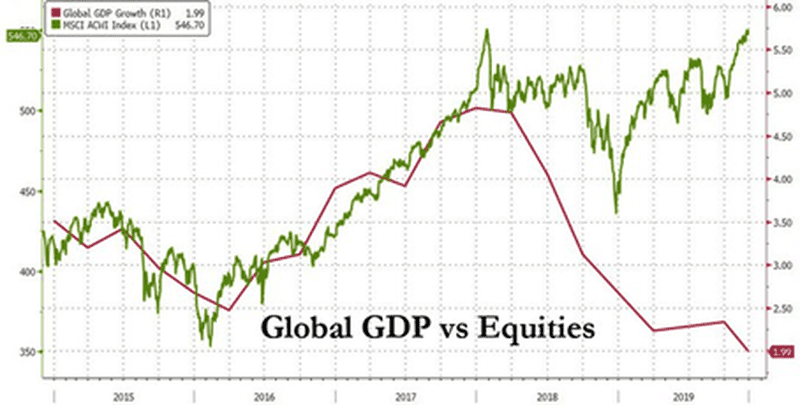 What we are experiencing right now is a ‘time lag’ between the collapse of the argument underlying the 10-year bull market and investors’ recognition of that.

A full decade and some $14 Trillion in newly-printed money later, plus the cheapest interest rates in recorded history, and yet the central banks have not been able to restore growth to the global economy. The experiment has failed.

And what do we have to show for it?

Time Is Running Out

And of course, that’s just what’s going on in funny-money land.

In the real world, the resources we rely on to power the economy, sustain our modern lifestyle, and put food into our bellies are rapidly becoming more scarce and expensive.

The world remains extremely dependent on fossil fuels and demands more every year. Yet discoveries peaked many decades ago and our reserve replacement rates are now negative:

As explained in this excellent podcast with petroleum geologist Art Berman, this supply/demand imbalance will predictably escalate throughout our lifetime. And a ‘smooth’ transition to other energy sources is mathematically impossible at this point. Sustained supply constraints and higher prices are inevitable.

Similarly, many of the most important ores and minerals necessary for economic development are in even worse decline:

As a consequence of human industry’s ever-increasing need to consume and the pollution that results, life on the planet is dying off at an unprecedented rate (short of a giant meteorite extinction-level event).

World animal populations are dropping at an alarming pace:

As are aquifers and forests:

The above statistics clearly show that we are dismantling the underpinnings of the ecosystems we depend on to live. Thus, we have become an existential threat to ourselves.

So should it comes as any surprise that we’re already seeing a diminishment of our health? And even of our ability to self-perpetuate?

Yes, our lives today still run largely as we’ve always been used to. But given the data above, how long (or brief) will the remaining time lag be before the ramifications begin to hit us at force?

Time To Get Busy

I guess it comes down to a simple choice, really: Get busy living or get busy dying.

So concluded Andy Dufresne in The Shawshank Redemption. And at this stage in the story, the decision is really that binary.

Society for its part is committed to the “busy dying” path. It’s still clutching tightly to Business As Usual. Like an alcoholic who has yet to admit to himself he has a drinking problem, it won’t address what it refuses to recognize.

So we can expect the status quo of consume-and-pollute to continue on for some time. Most likely it will be pursued until it simply proves too painful than the remaining alternatives. By which time our other options are likely to be materially worse than they are today. That’s the bad news.

The good news is that conscientious, critically-thinking individuals like you can choose to get busy living.

There is much you can do during this time lag to invest in resilience and install regenerative models before the next systemic crisis is upon us.

Whatever time we have left, and it may very not be much, is a gift. Use it.

Many of the best defenses — like fitness, community, and valuable skills — require time to acquire. You can’t simply buy them off the shelf the way you can, say, a water filter or a backup generator. Once time has run out, you either already have them in place or you don’t.

In Part 2: How Best To Use The Time Remaining we provide our advice for prioritizing and allocating your precious time capital, as well as share with you what and Chris and I are most focused on in own personal preparations.

Included along with this are several hours of excellent video clips of experts from our recent educational live events and webinars, available to-date only to premium subscribers.

The War For Your Mind: How to Stay Informed Without Going Insane