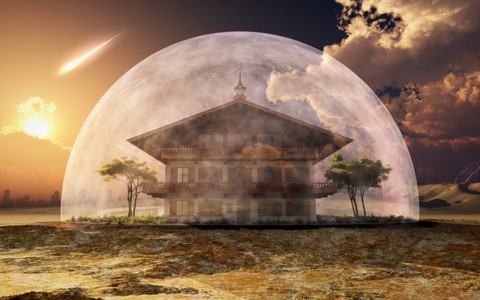 James Wesley Rawles is a former U.S. Army intelligence officer who now runs the popular prepping site SurvivalBlog.com. In today's podcast, Chris and Jim discuss the more practical aspects of prepping, including the frequently-asked topic of relocation (Where should I live?):

The key issue, given my perspective on preparedness, is population density. If people have the opportunity to move to a lightly populated region, I highly recommend that they do so. Fewer people mean fewer problems. And regardless of the nature of a disaster, whether it is manmade or natural, if you are in a lightly populated region, odds are you are going to have fewer problems. You are certainly not going to have any big riots out in the middle of the hinter boonies, like where I live. So I would put population density at the very top of my list.

Another key consideration for picking a piece of property would be the local economy. You want to have a diverse local economy that is predominantly agricultural. And you want to be in an area with plentiful water, and preferably in an area with predominantly hydroelectric power, because hydroelectric power is the most resilient. And as I described in my blog, I wrote an article entitled “Islands in the Darkness,” and I was talking about the contingency plans that many power utilities have for cutting themselves off of the national grid in the event that the national grids go down. There are actually three grids: the Western Grid, the Eastern Grid, and the Texas Grid. If one of those grids were to go down, a lot of utilities that are in power-exporting areas will be able to island it for themselves and their customers. For example, where I live, there are several major hydroelectric dams within 30 miles of me. And if the grids were to go down, within less than a minute they could reconstitute an island of power for all of the people in our power co-op, for example.

A region that is quite good for that was described in my novel Survivors. I set that in the area of Farmington, New Mexico, which is a natural-gas-producing area. And they, too, are a power exporter, because they not only have a large coal-fired plant in Northern Arizona, there is also in the Four Corners region a tremendous amount of natural gas that is produced. And they, too, export power.

So ideally, you want to be in a lightly populated area, an agricultural area, an area with plentiful water, preferably with shallow well depth – or even better, spring water, where you gravity-flow water to a house – and again, a power-exporting area. Those will be the safest places to be if everything falls apart. And if we have a major grid-down whammy, a multigenerational whammy, I cannot think of a better place to be than someplace like that. I certainly would not want to be on the East Coast. I certainly would not want to be in any of the major cities or near them. Nor would I want to be on a natural line of drift out of a major city.

People really need to live at their retreats year-round and get into a self-sufficient lifestyle. You cannot just 'buy' survival. There is a learning curve to all of this. You can buy a wood cookstove, but that does not mean you know how to really cook with a wood cookstove or bake with it. There is a learning curve there; the same for gardening. It takes years really to develop soil, to build up your multi-year crops, your berries, for example. Asparagus beds take years to develop. Fruit and nut trees take years to grow to maturity.

You really have to be there. You have to learn the peculiarities of your local climate and your local frost-free days for growing. You have to learn which particular crops grow well in your climate zone. There is a learning curve to all of that. And unless you really live it, you cannot just expect to show up at your retreat at the eleventh hour and then start gardening the next day. It is probably not going to happen, at least not the way people hope it will.

In the country, the population density may be low, but all the neighbor kids wander all over the countryside with their 22s out shooting small game all the time. They know where every house is. And for that matter, looters can follow power lines to just about everywhere if they are going to follow roads. So unless you buy an insanely remote property, someone is going to know that it is there. So survival is all about friends that you can trust and neighbors that you can trust. You cannot do it on your own. And anyone who hopes to do it on their own, I think is foolish.

Community can be as close as just two or three neighbors, but it is still community. And you need those people that you can count on. And let me tell you, as a former military officer, I have done continuous operations where we have had to maintain security 24 hours a day — and that was with a platoon-size unit. These were all young, fit people, and even we got worn out. To think that one family is going to maintain 24/7, 365 days a year, and 360-degree perimeter security for an extended period of time is ludicrous. It is just not going to happen. You are going to burn yourself out within a few days. You really need neighbors that you can count on. You need a neighborhood watch on steroids.

Click the play button below to listen to Chris' interview with James Wesley Rawles (37m:39s):