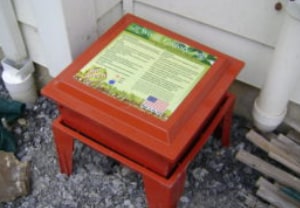 How to Start and Maintain a Worm Compost Bin

How to Start and Maintain a Worm Compost Bin

I've been planning to start a worm compost bin for the past seven years, but it was always one of those things that gets stuck on the to-do-list. With my compost tea setup and my starts suffering from poor quality soil, I'm in desperate need of a source of high compost. So, I finally ordered some worms and learned how to take care of them. A typical worm farm will not produce massive quantities of compost but it will produce a very high quality compost, and a small amount of good compost can be multiplied in a compost tea brewer. Also, I wanted to give scraps to the worms that my chickens won't or I don't want them to eat like egg shells, shredded paper, etc…

I purchased a Worm Factory 360, so my instructions will involve using this bin setup to house my worm farm. However, the instructions are useful even if you have a DIY bin. I do not have any affiliation with the company, but I liked their design, thinking it would save me time and effort. Having said that, many people build cheap DIY worm bins with great success.

Step 1 (Find a good location for your worm bin)

Worms do best with bedding temperature between 55-75. This usually ends up being an average of day and night time air temperatures. So if it’s 80 in the day and 60 at night the soil will likely be 70. It’s important that the soil temp in your bin never exceeds 90 degrees or dips below 34 degrees. If the soil freezes, your worms will freeze and die. It’s also important that your worm bin is sheltered from the wind, the rain, the sun, and the snow. So, a porch, balcony, or basement is a good location. I’m planning to keep my bin along the north side of my house during the growing season under an overhang, then moving to my greenhouse in the winter, to keep the soil from freezing.

My worm bin under the overhang behind my house.

Step 2 (Preparing the bedding for your new worms)

If your worm bin has holes on the bottom of it like mine, you’ll want to add a couple of sheets of newspaper on the bottom before putting in your worms, so they don’t leave. The worm factory 360 comes with a starter amount of coir (ground coconut fiber), pumice, and shredded paper, but you have other options. Dried leaves, ground eggshells, grit, and minerals are also good bedding components. Do not use lime. My plan is to mostly use shredded paper, with a small amount of ground eggshells. It is important that the bedding is moist but not dripping wet. If you squeeze the bedding and only a few drops of water come out, you’re good, but if water pours out, it is too wet. You should also add 2-3 cups of food for your new worms, in the corner of your bin. Cover your bin, and the bedding and food with 5-10 pages of damp newspaper. This will help to keep the bedding moist and keep the worms in. Then place the top on your bin.

I ordered red wigglers, as they are commonly thought to be the best composting worms. When your worms arrive, remove the newspaper cover and place the worms along with the bedding they were shipped in into your bin. Replace the damp newspaper cover and your bin cover. Leave a light on for the first 2-3 days, as this will discourage your worms from leaving your bin. It is best to leave your worms alone for 2-3 days so they can become acclimated to their new home. After 2-3 days, check to see if the worms are eating. If they are, you can start to add food as needed.

Ideally, you monitor your worms and feed as they need it. Do not overfeed, as this can lead to fruit fly outbreaks, and do not underfeed, as your worms could die, or will not process as much compost. When you add food, it should be 50% green material, and 50% brown material. The Worm Factory 360 has a nice design, where you add food to the top bin, and when you have four bins full, you can harvest compost from the bottom bin, and the worms will be at the top.

The Worm Factory 360 has a spigot on the bottom to drain any leachate. Leachate is the excess moisture that runs off your vermicompost. Leachate can contain toxins that are harmful to plants and humans. Leachate should be drained regularly, and if you’re getting more than 2-3 ounces of liquid per week, your compost is probably too wet. Leachate can have value as a fertilizer, but it can also have toxins, so I recommend using it on non-food plants.

A vermicompost bin is a living ecosystem with billions of organisms, such as: bacteria, protozoa, nematodes, fungi, and molds. These microbes are a necessary component of a healthy bin. Insects, arachnids, crustaceans, and other organisms will also visit and take up residence in your bin. These organisms range from helpful, benign, or damaging.

Potworms are small white worms that can develop into massive populations. They are sometimes thought to be baby red wigglers. Pot worms are benign and do no damage to your worms or plants. They tend to thrive in wet, acidic environments, and when you are feeding lots of starchy foods.

Earwigs and beetles are common in a compost bin, and are benign.

Springtails and mites can compete with the worms for food and can drive the worms down to the bottom of your bin, hampering reproduction. Springtails are tiny, wingless insects that are usually white in color, but may also be yellow, green, gray, red, orange, or lavender. They have a springlike structure under their bellies that allows them to jump when disturbed, as high as 75 mm. Mites are small and usually whitish brown to reddish brown in color. Springtail and mite populations can be kept down by making sure your bin does not get too wet.

Fruit flies are not harmful to your worms, but they can be a nuisance. Keep those fruits and veggies covered with your newspaper cover, and do not overfeed, to keep the fruit fly population in check.

Millipedes are slow moving arthropods that are wormlike and segmented with many tiny legs. They are harmless.

Centipedes, on the other hand are fast moving predators that will kill your earthworms. The only way to remove them is by hand, but be careful as they will pinch. I suggest wearing gloves, and relocate them to the garden, as they can be a valuable predator in other circumstances.

Sow bugs and pill bugs are highly beneficial in a compost bin.

Slugs and snails won’t eat your worms, but they will eat their food, and their eggs can be transferred to your plantings. To remove slugs and snails, take a covered plastic container and make 1 inch openings on the sides, then add an inch of beer to the bottom. Sink the container in the top tray of your bin. The slugs will be attracted to the beer, fall in, and drown.

Ants are not a major problem, unless you have fire ants. Ants usually take up residence when the compost is too dry.

Blow flies and house flies are not a problem, as long as you keep rotting meat, greasy food, and pet feces out of your bin.

Flat worms are slimy worms that are gray to brown in color with dark stripes running down their back. They have a hammer shaped head. They feed and move around at night. They thrive in high temperatures with high humidity. Flat worms are voracious predators of earthworms, so they should be removed if seen. You cannot cut them in half, as they will grow back from small pieces. It’s best to collect them in a sealed clear container and dry them in the sun.

Worms after one week.

Phil Williams is a permaculture consultant and designer and creator of the website foodproduction101.com.  He is also the author of numerous books, most recently, Fire the Landscaper and Farmer Phil's Permaculture. His website provides useful, timely information for the experienced or beginning gardener, landscaper, or permaculturalist. Phil's personal goals are to build soil, restore and regenerate degraded landscapes, grow and raise an abundance of healthy food of great variety, design and install resilient permaculture gardens in the most efficient manner possible, and teach others along the way.