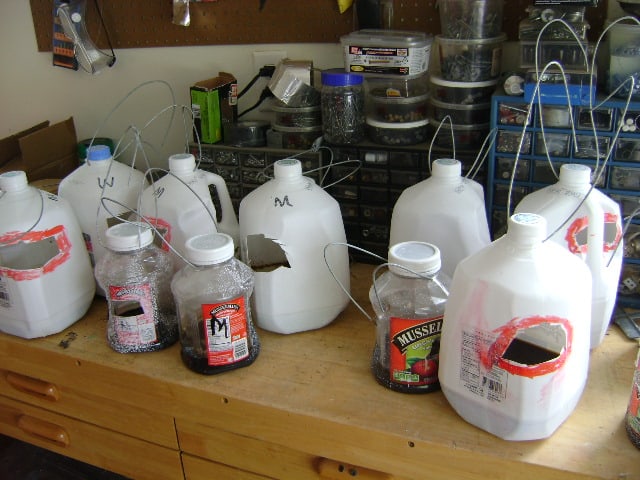 How to Make a Codling Moth Trap and Lure

How to Make a Codling Moth Trap and Lure

Last year, a lot of my apple crop and some of my pear crop were infested with codling moth larvae. Given that I don’t spray my trees, I needed to come up with an alternative for control, unless I wanted to grow apples for the moths. This season, I’ve sprayed kaolin clay, which is a tiny clay particle that you spray on to the leaves and the fruit. This acts as an irritant to the pests, causing them to move on. This has worked well so far, as we’ve already had our best cherry harvest yet, and the apples and pears still look pretty clean. The other protection I’ve given my trees is a codling moth trap and lure. These are all homemade and inexpensive.

The purpose of hanging a codling moth trap and lure in your trees is to attract the moths away from your fruit and into the lure, where they drown in the liquid. This coupled with the kaolin clay has worked well to break the codling moth cycle. As I was researching this project, I wasn’t certain what would be the best type of lure and the best type of trap to use. Of course the internet is full of diverging opinions. So, I decided to try slightly different traps and lure recipes to find what worked best for me.

Some people said it was important to have only one hole in the container, and others said it was good to put two holes so the lure can waft through the orchard. Some people swore that painting red around the hole would attract more moths, and others didn’t mention it. So I made traps with and without red, and traps with one hole and with two.

I found two recipes to try. One was a simple recipe of 50% water and 50% molasses. The other was 1 cup of apple cider vinegar, ½ cup molasses, 1/8 teaspoon of ammonia, and 4 ½ cups of water. Half of the traps I put out had one or the other recipe. I marked them, so I wouldn’t mix them up.

How to Make the Traps

How to Make the Lure

The 50% molasses and 50% water trap was easy. I added the molasses into a big container and then added the water. Then I mixed. I poured the lure into my containers outside, because I did not want to spill sticky molasses. Your kitchen sink would be okay also.

After a week and a half, I brought the traps in and checked them to see which ones worked well and which ones didn’t. First, they all worked to some varying degree. The containers with red around the openings did NOT catch anymore moths than the ones that did not have red. The containers with two holes did catch slightly more moths than the ones with one hole. The apple cider vinegar and molasses lure did catch more that the straight molasses and water recipe.

So, in my opinion, use the apple cider vinegar and molasses recipe for a lure, and cut holes in both sides of your container. If you feel like painting the openings red, that’s fine, it won’t hurt, but I don’t think it makes a big difference.

Phil Williams is a permaculture consultant and designer and creator of the website foodproduction101.com.  He is also the author of numerous books, most recently, Fire the Landscaper and Farmer Phil's Permaculture. His website provides useful, timely information for the experienced or beginning gardener, landscaper, or permaculturalist. Phil's personal goals are to build soil, restore and regenerate degraded landscapes, grow and raise an abundance of healthy food of great variety, design and install resilient permaculture gardens in the most efficient manner possible, and teach others along the way.

Preparedness Basics for the Elderly or Disabled

The struggle of raising animals, with love, for the slaughter