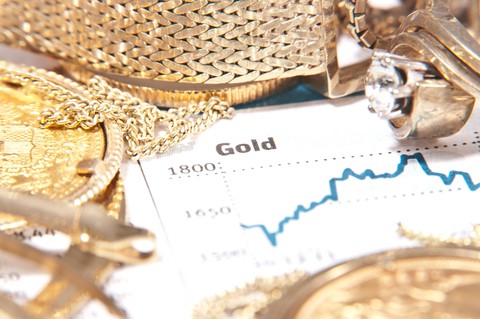 Few investment/finance topics spark as many strong emotions as gold, for its adherents and detractors are equally committed to their views, and equally unlikely to switch camps.

Adherents view gold as the only real money in a world of constant currency debasements, while detractors don’t see gold as an investment, as it lacks a yield and price-earnings ratio.

The recent -$220 decline and subsequent +$150 recovery in the price of gold unleashed a torrent of speculation about the causes of the sharp drop, as well as an outpouring of emotions ranging from schadenfreude in the anti-gold crowd (who took pleasure in the sufferings of the gold adherents) to an understandable angst in the pro-gold camp.

If the market for gold is as manipulated as every other market—and as Matt Taibbi recently explained, everything is indeed rigged (“There’s no price the banks can’t fix”)—what does that mean for individual investors?

Since I have been following the gold market for enough years to accrue accusations of being a gold bug, it seems to me those with an interest in owning gold (or gold-based securities such as the GLD exchange-traded fund or the stocks of gold mining companies) tend to fall into three often-overlapping groups:

1.  Those who own gold as insurance against a systemic financial meltdown.  Since gold acts as an insurance policy, the price doesn’t matter much. If it rises, that makes the owner feel wealthier, but the purpose for owning gold doesn’t really change whether the price is $1,000 or $2,000 an ounce.

2. Those who own gold as a speculation that it will rise considerably in a hyper-inflationary environment. Since there are only two ways to erase unpayable debts and promises – default or high inflation – there is a good chance The Powers That Be (TPTB) will select inflation as the lesser of two evils, and a massive debasement of paper currencies has typically led to correspondingly high gold valuations.

In the aftermath of the collapse of the fiat regime, owners of gold will be sitting very prettily, as everything else will be cheap when priced in gold.

For those in this category, the price of gold does not change the reason for owning gold, and so the market churn is either a parlor game or an opportunity to add to one’s position in gold if it appears to be “on sale” when priced in fiat currencies.

3.  Those who maintain a trading position in gold and its related investment vehicles, buying when gold/gold-based stock is relatively cheap and selling it or shorting it when it tops out.  Those trading the fluctuations up and down have a short-term perspective, typically a year or two at most, and sometimes as little as a few days.

The fluctuations in the price of gold and gold-mining stocks only matter to those in this third category: traders playing these markets for short-term gains.

The difference between an adherent of one fundamental camp or the other and a trader can be illuminated by this question: Does taking the other side of your fundamental position feel like betrayal?

For example, if a gold bug takes a short position against gold, does it feel like betrayal?

In general, adherents of one camp or the other look for price to confirm their fundamental position; the fundamentals are “supposed” to cause the price to move in the expected direction.

In this frame of reference, betting against one’s fundamental position typically feels like betrayal.

A trader, on the other hand, looks at fundamentals for context but isn’t committed emotionally to one view or another. The trader is aware of trend, reversal of trend, or trendless markets; he/she lets price dictate the eventual outcome.

The trader knows every market is manipulated for one reason or another by those in a position to influence the market, and that is simply another fundamental context to keep an eye on.

For traders, ascertaining what a market “should” do is a fruitless exercise; possibilities are mapped out based on past patterns and various indicators, but what eventually transpires is viewed probabilistically.  The odds may favor this trend, but other data points might suggest the trend could break down.

The trader is alive to the various possibilities but waits for price to confirm.

There’s an old investment maxim: Marry your spouse, not your stock.  In other words, don’t get emotionally committed to a stock or position.

A detached trader doesn’t just avoid marrying a position; he doesn’t even date them.

The odds are against those of us outside the circle of power, and so the trader has to develop not just detachment but an edge of some sort. Since there are tens of thousands of smart people using tens of thousands of computers to identify an edge, finding an edge that lasts long enough to be useful is difficult.

It’s often said that what everyone knows has no value, as it cannot possibly offer any edge.

On the other hand, sometimes what’s “obvious” has value simply because it is so well known that it has been fully discounted.

With this in mind, let’s go back to gold.  The only possible interest in the price for those holding gold for insurance or long-term speculation is whether gold is “on sale” or if it might get even cheaper in fiat currency; i.e., even more on sale.  This would offer an opportunity to add to long-term holdings.

The trader, on the other hand, is interested in identifying tradable trends over the medium and short-term, not just in gold but in the stocks of gold miners. He/she will try to gain from the trend, regardless of whether it is up or down.

The Two Standard Fundamentals: Central Bank Easing and the Dollar

Let’s start our analysis with a look at the two fundamentals most often mentioned as causal factors influencing the price of gold: central bank policy (quantitative easing, a.k.a. QE) and the U.S. dollar.

The theory being batted about is that gold has plummeted into a bear market because the global economy is improving and central banks will soon lighten up on quantitative easing.  Reducing the flow of “free money” is presumed to make gold less attractive.

The other assumption is that the U.S. dollar and gold are on a see-saw: when the dollar rises, gold falls, and vice versa.  Now that the dollar is strengthening, gold is falling.

Let’s look at a few simple charts to see if there is any evidence for these ideas. The first chart is of GLD, the gold ETF that serves as a handy proxy for gold.

At just a quick glance, challenges to these assumptions quickly jump out at us. For instance, if gold rises and falls in correlation with central-bank quantitative easing, then why did gold rise from 2002 to 2008, when there was no quantitative easing? 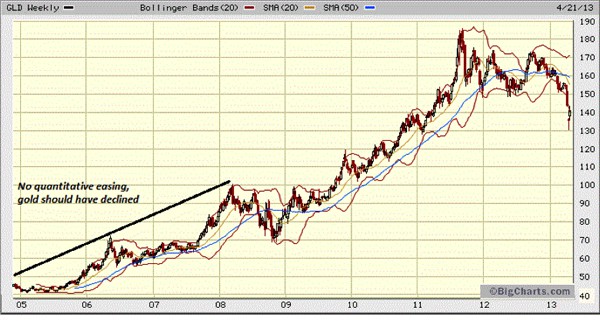 This line of thinking makes no sense if we look at a simple chart of price.

As for the dollar, compare the chart of the DXY Dollar Index with the above chart. Is there any correlation that doesn’t require tortuous caveats and other conditions? 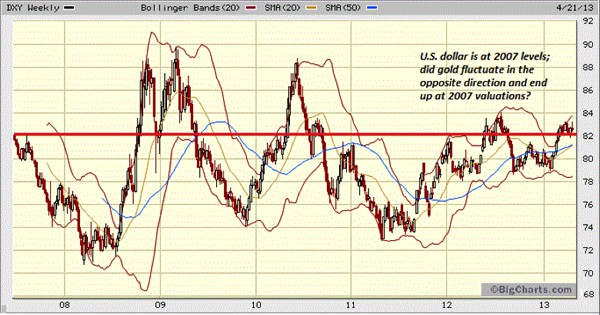 If there is a causal see-saw relationship between gold and the DXY, it’s certainly well hidden. 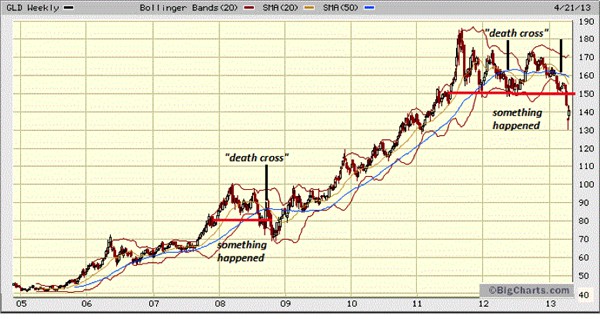 It’s obvious that gold has broken its long uptrend.  Those declaring that the gold bull market is over have strong evidence for this conclusion.

But perhaps more interestingly, “something happened” in a similar fashion back in 2008, when gold broke through support and a “death cross” in the moving averages occurred.  After dropping about 30% from its previous high, gold bottomed and eventually exceeded the previous high about a year later, and it never looked back.

What does this tell us? Simply this: It’s too soon to conclude the bull market is over or if “something happened” that presages another global financial meltdown that eventually benefits gold.

In Part II: A Technical Analysis of Where the Gold Price Is Likely to Go Next, we apply classical technical analysis to the charts for gold, to learn what they are telling us about the likely further price direction for the metal. Is further rally higher more probable, or a retracement back to (or below) the recent lows?