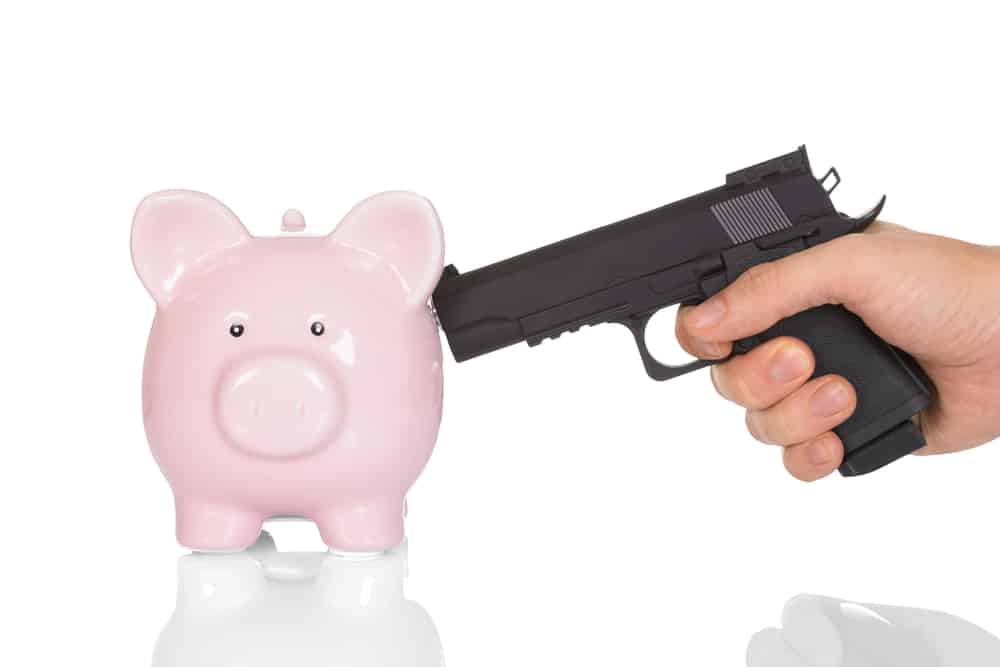 It means governments are limiting the use of cash and a variety of official-mouthpiece economists are calling for the outright abolition of cash. Authorities are both restricting the amount of cash that can be withdrawn from banks, and limiting what can be purchased with cash.

The War On Cash: Why Now?

Why are governments suddenly acting as if cash money is a bad thing that must be severely limited or eliminated?

Before we get to that, let’s distinguish between physical cash—currency and coins in your possession—and digital cash in the bank. The difference is self-evident: cash in hand cannot be confiscated by a “bail-in” (i.e. officially sanctioned theft) in which the government or bank expropriates a percentage of cash deposited in the bank.  Cash in hand cannot be chipped away by negative interest rates or fees like cash held in a bank.

Cash in the bank cannot be withdrawn in a financial emergency that shutters the banks, i.e. a bank holiday.

When pundits suggest cash is “obsolete,” they mean physical paper money and coins, not cash in a bank. Cash in the bank is perfectly fine with the government and its well-paid yes-men (paging Mr. Rogoff and Mr. Buiter) because this cash can be expropriated by either “bail-ins” or by negative interest rates.

Mr. Buiter, for example, recently opined that the spot of bother in 2008-09 (the Global Financial Meltdown) could have been avoided if banks had only charged a 6% negative interest rate on cash: in effect, taking 6% of the depositor’s cash to force everyone to spend what cash they might have.

Both cash in hand and cash in the bank are subject to one favored method of expropriation, inflation. Inflation—the single most cherished goal of every central bank—steals purchasing power from physical cash and digital cash alike. Inflation punishes holders of cash and benefits those with debt, as debt becomes cheaper to service.

The beneficial effect of inflation on debt has been in play for decades, so it can’t be the cause of governments’ recent interest in eliminating physical cash.

So now we return to the question: Why are governments suddenly declaring war on physical cash, the oldest officially issued form of money?

The first reason: physical cash has the potential to evade both taxes as well as officially sanctioned theft via bail-ins and negative interest rates. In short, physical cash is extremely difficult for governments to steal.

Some of you may find the word theft harsh or even offensive. But we must differentiate between taxes—which are levied to pay for the state’s programs that in principle benefit all citizens—and bail-ins, i.e. the taking of depositors’ cash to bail out banks that became insolvent through the actions of the banks’ management, not the actions of depositors.

Bail-ins are theft, pure and simple.  Since the government enforces the taking, it is officially sanctioned theft, but theft nonetheless.

Negative interest rates are another form of officially sanctioned theft.  In a world without the financial repression of zero-interest rates (ZIRP—central banks’ most beloved policy), lenders would charge borrowers enough interest to pay depositors for the use of their cash and earn the lender a profit.

If borrowers are paying interest, negative interest rates are theft, pure and simple.

Why are governments suddenly so keen to ban physical cash? The answer appears to be that the banks and government authorities are anticipating bail-ins, steeply negative interest rates and hefty fees on cash, and they want to close any opening regular depositors might have to escape these forms of officially sanctioned theft.  The escape from bail-ins and fees on cash deposits is physical cash, and hence the sudden flurry of calls to eliminate cash as a relic of a bygone age—that is, an age when commoners had some way to safeguard their money from bail-ins and bankers’ control.

Forcing Those With Cash To Spend Or Gamble Their Cash

Negative interest rates (and fees on cash, which are equivalently punitive to savers) raise another question: why are governments suddenly obsessed with forcing owners of cash to either spend it or gamble it in the financial-market casinos?

The conventional answer voiced by Mr. Buiter is that recession and credit contraction result from households and enterprises hoarding cash instead of spending it.  The solution to recession is thus to force all those stingy cash hoarders to spend their money.

There are three enormous flaws in this thinking.

One is that households and businesses have cash to hoard.  The reality is the bottom 90% of households have less income now than they did 15 years ago, which means their spending has declined not from hoarding but from declining income. 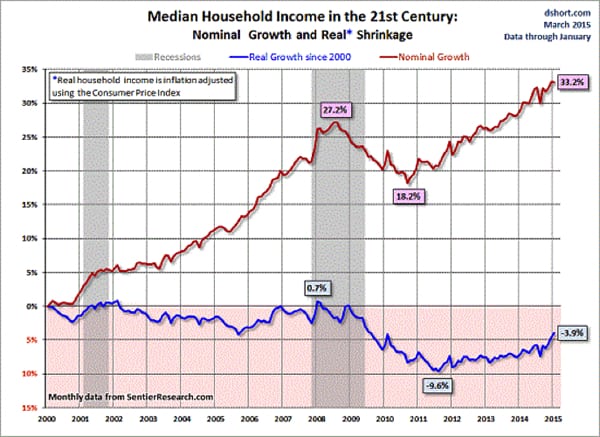 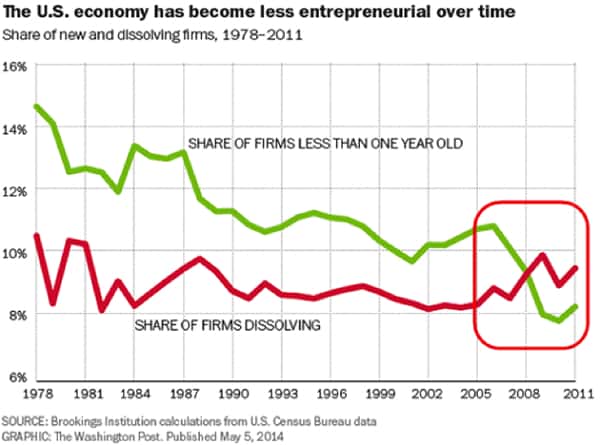 The bottom 90% has less income and faces higher living expenses, so only the top slice of households has any substantial cash.  This top slice may see few safe opportunities to invest their savings, so they choose to keep their savings in cash rather than gamble it in a rigged casino (i.e. the stock market).

The second flaw is that hoarding cash is the only rational, prudent response in an era of financial repression and economic insecurity. What central banks are demanding–that we spend every penny of our earnings rather than save some for investments we control or emergencies—is counter to our best interests.

Those who already own the majority of productive assets are able to borrow essentially unlimited sums at near-zero interest rates, which they can use to buy more productive assets, while everyone else–the bottom 99.5%–is reduced to consumer-serfdom: you are not supposed to accumulate productive capital, you are supposed to spend every penny you earn on interest payments, goods and services.

This inversion of capitalism dooms an economy to all the ills we are experiencing in abundance: rising income inequality, reduced opportunities for entrepreneurship, rising debt burdens and a short-term perspective that voids the longer-term planning required to build sustainable productivity and wealth.

According to the Federal Reserve, total outstanding physical cash amounts to $1.36 trillion.

Given that a substantial amount of this cash is held overseas, physical cash is a tiny part of the domestic economy and the nation’s total assets. For context: the U.S. economy is $17.5 trillion, total financial assets of households and nonprofit organizations total $68 trillion, base money is around $4 trillion, and total money (currency in circulation and demand deposits) is over $10 trillion (source).

Given the relatively modest quantity of physical cash, claims that eliminating it will boost the economy ring hollow.

Following the principle of cui bono—to whose benefit?–let’s ask: What are the benefits of eliminating physical cash to banks and the government?

Benefits To Banks And The Government Of Eliminating Physical Cash

The benefits to banks and governments by eliminating cash are self-evident:

In fractional reserve systems such as ours, banks are only required to hold a fraction of their assets in cash.  Thus a bank might only have 1% of its assets in cash. If customers fear the bank might be insolvent, they crowd the bank and demand their deposits in physical cash. The bank quickly runs out of physical cash and closes its doors, further fueling a panic.

The federal government began insuring deposits after the Great Depression triggered the collapse of hundreds of banks, and that guarantee limited bank runs, as depositors no longer needed to fear a bank closing would mean their money on deposit was lost.

But since people could conceivably sense a disturbance in the Financial Force and decide to turn digital cash into physical cash as a precaution, eliminating physical cash also eliminates the possibility of bank runs, as there will be no form of cash that isn’t controlled by banks.

While the benefits to banks and governments of banning physical cash are self-evident, there are downsides to the real economy and to household resilience.

In Part 2: What To Do With Your Cash Savings, we’ll look at the most influential forces in play in this war, and consider strategies for preserving purchasing power, avoiding bail-ins, fees and other threats to cash savings.