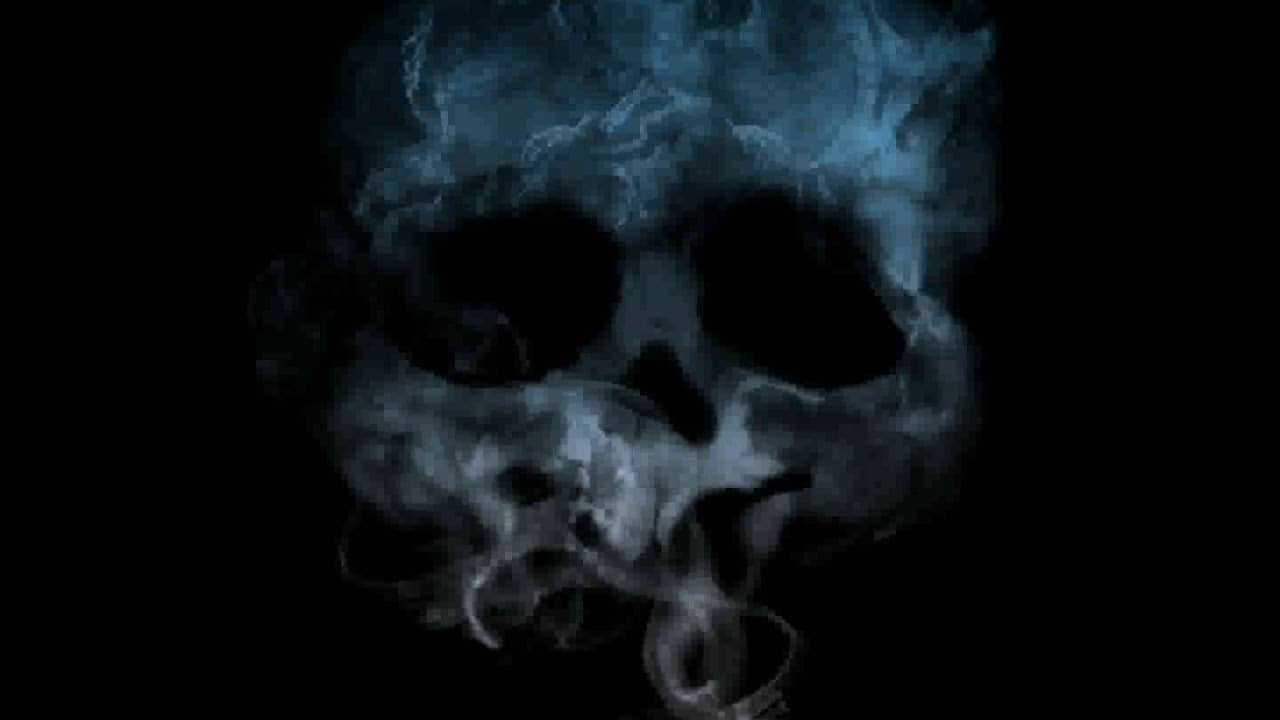 Well, stocks are back at all-time highs. Ignited by the Fed’s “Not-QE” program and endless Trump administration teases of an “imminent” China deal, the S&P 500 has been propelled above its upward Bollinger band — a hyperextension only seen one other time since 2007:

Every week since Not-QE was announced has seen the S&P close green (this week finally ending the streak, barely). We’re officially in a melt-up, where both good news and bad news are accepted as valid reasons to push stocks even higher.

But what’s notable about this melt-up is that it’s missing a compelling narrative. Every past asset price mania required a feel-good mantra that convinced the masses “This time is different!”.

The South Sea bubble promised access to the untapped riches of the vast Asian sub-continent. Dotcom companies were going to unlock tremendous value previously trapped by the inefficiency of the old analog way of doing business. In 2017, Bitcoin looked like it just might replace fiat currencies overnight.

During the price melt-ups accompanying each of these manias, the public fell for the siren song of a radically better future, available RIGHT NOW if you just jump on the party train before it’s too late.

But today? What’s the radically better future being promised? Where’s the party train headed to?

A Parade Of Horribles

As best I can tell, it seems the rationale (I’m using that term very generously) for the current market melt-up is that:

Let’s dig into each of these. But before we do, let’s be clear that neither of these promises a “radically better” future.

The Fed, and its central bank brethren around the globe, have been backstopping the market for the past decade. There’s really nothing new in that.

And resuming friendly trade with China will largely be a restoration of past conditions. While, yes, the drag of the recent trade constraints will be removed and perhaps the US will receive some nice concessions, it’s not like we’ll be gaining a major new trading partner that we didn’t have before.

Now, looking at the Fed’s new QE program: how material is it? Well, since the outbreak of the GFC, we know that the central banks have more than tripled the world’s money supply (from roughly $6 trillion in 2008 to $20 trillion today): 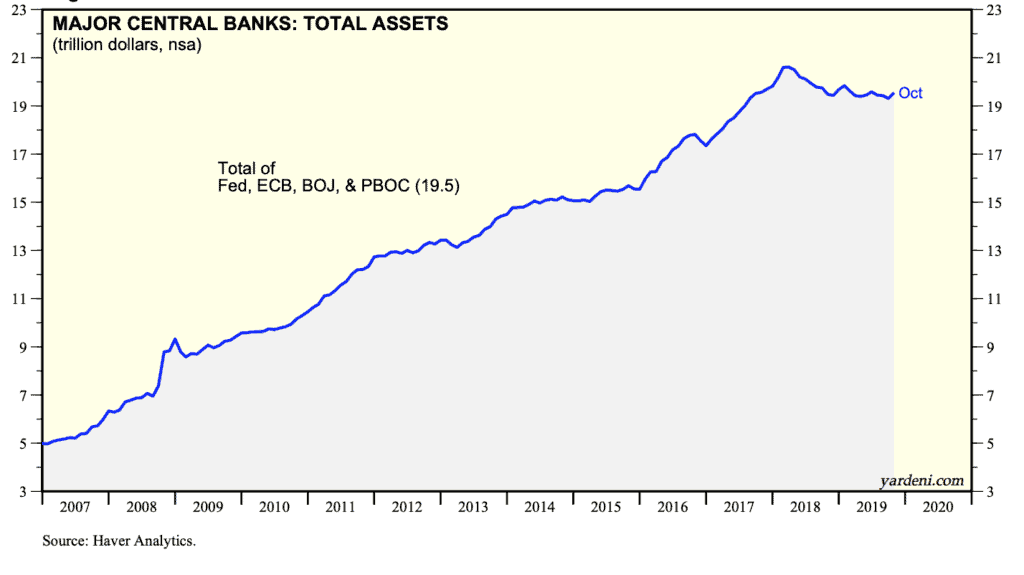 And how has that worked out?

Well — hurray! — asset prices (stocks, bonds, real estate, fine art, etc) have shot the moon. Mind you, at the cost of creating the worst-ever wealth disparity in the US, and many other countries as well.

And the main expressed reason for all this liquidity — to goose the global economy back to robust growth, how are we doing there?

Not well. Mission definitely *not* accomplished.

Despite the tens of $trillions created from thin-air over the past decade, of sacrificing prosperity from the future (and not just ours, but our children’s and grandchildren’s) in exchange for growth today, here’s where things stand:

On top of the sour GDP outlook, US companies are officially in an earnings recession, with every quarter of 2019 now projected to be lower than 2018’s.

In theory at least, stocks are supposed to valued based on their prospects for future profits. Do shrinking earnings and an increasingly recessionary global outlook scream “buy stocks now at record prices!” to you? They sure don’t to me.

Now looking over at the China trade talks, what’s realistic to hope for here? The much-touted lets-start-with-the-easy-stuff Phase 1 ‘agreement’ still remains unsigned. And even if it becomes so, it doesn’t address the principal issues at the heart of the trade dispute.

Worse, it’s increasingly being regarded as meaningless. Yale’s Stephen Roach derides it as “hollow”, “flawed” and “ridiculous” with no real value beyond the superficial.

And being honest with ourselves, why would China strike a trade agreement with a president up for re-election in less than a year? He may not be around to hold up his end of the deal. It just makes sense to wait until the dust settles after next November.

And this goes triply when that president is currently mired in impeachment hearings. Trump needs the deal done soon much more than China does. Time is on their side, giving the Chinese the lion’s share of the bargaining power here.

Toss in the likely passage of the Hong Kong Human Rights and Democracy Act — which is massively offensive to China’s Politburo and already approved by both chambers of the US Congress — and the odds of the Chinese happily agreeing to anything substantive in the near future is about as low as Epstein having hanged himself.

So… ineffectual QE and pitiful odds of anything material happening with China anytime soon. These are the promises of a “radically better” future responsible for driving the current market melt-up? This is the rationale for stocks being the most overvalued they’ve ever been? 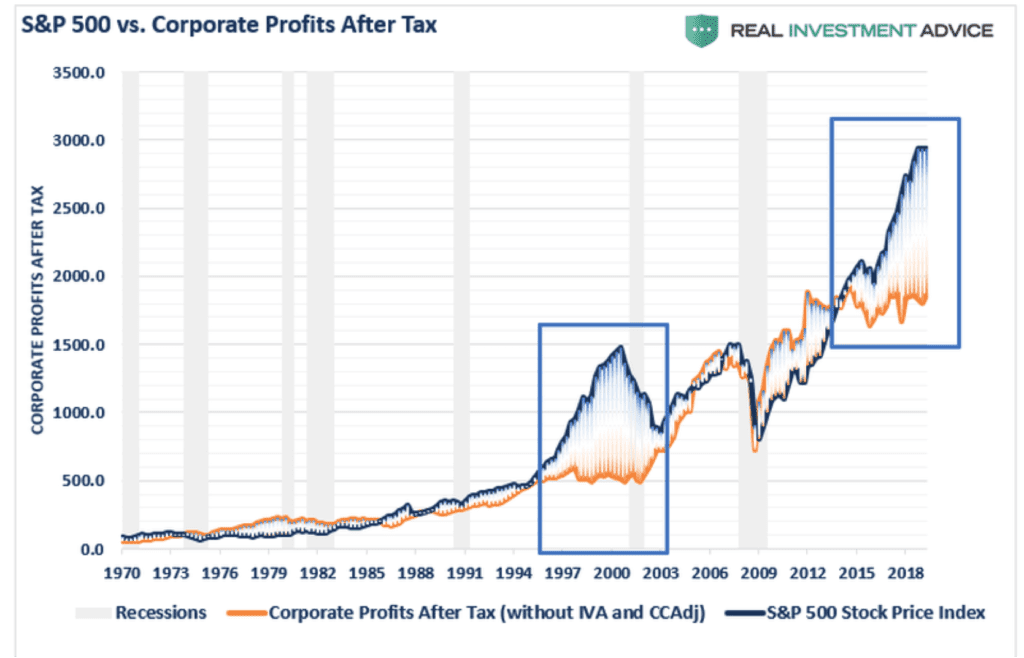 This doesn’t smell right. All asset price manias end badly. But at least you can understand the psychology that created the mania in the first place.

This time, you can’t even do that. Which leads us to believe that not only will this end badly, but sooner vs later. There’s just not a strong enough party-vibe to power the delusion.

Actions To Take Before 2020 Arrives

Given all the above, the prudent among us should regard today’s hyperextended prices with healthy skepticism. Both history and common sense show us that what can’t sustainably continue — won’t.

Now is the time to prioritize defense and to position your portfolio for safety. And for those with the means and constitution, perhaps to place a few managed bets on lower prices ahead.

Specifically, we recommend everyone reading this ask themselves the following questions:

The above questions are timely given today’s extreme market distortion. As usual, we recommend exploring both seriously with your professional financial advisor.

But there are other important questions that are just as timely given the approaching year end.

Every one of us should be in conversation with a professional advisor asking: What smart end-of-year steps should I be taking before Jan 1st arrives?

The “right” answers will depend on your unique personal situation and goals. But common tactics include:

If you don’t have a professional financial advisor whom you feel comfortable discussing these important questions with, consider scheduling a free consultation with our endorsed advisory firm. They have decades of experience helping investors just like you navigate the decision-making process and position your portfolio appropriately given your goals.

Just don’t delay. The end of the year will be here before you know it.

And the inevitable market correction could well arrive even sooner.