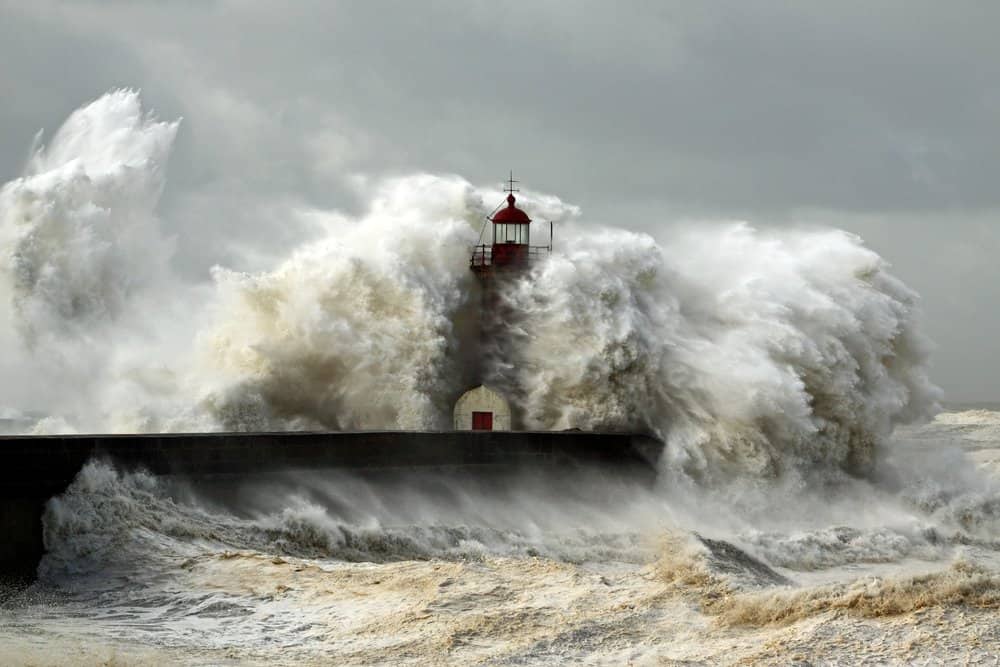 The Great Market Tide Has Now Shifted To Risk-Off Assets

The Great Market Tide Has Now Shifted To Risk-Off Assets

In the conventional investment perspective, risk-on assets (i.e. investments with higher risks and higher potential returns) such as stocks are on a see-saw with risk-off assets (investments with lower returns and lower risk, such as Treasury bonds). When risk appetites are high, institutional managers and speculators move money into stocks and high-yield junk bonds, and move money out of safe-haven assets such as gold and U.S. Treasuries.

But recently, markets are no longer following this convention. Safe haven assets such as precious metals and Treasuries are soaring at the same time that stock markets bounced strongly off the post-Brexit lows.

Risk-on assets (stocks) rising at the same time as safe-haven assets is akin to dogs marrying cats and living happily ever after.

Why is the market acting so schizophrenic? What’s changed?

Before we cover the dynamics that are in play, let’s review the market gyrations so far in 2016.

The Market Gyrations Of 2016

In broad brush, the tide that raised all risk-on boats for the past seven years is now ebbing.

The momentum that drove the stock market higher since early 2009 has weakened. Stocks have repeatedly plummeted sharply over the past year, only to be saved by central bank jawboning of the now-shopworn “whatever it takes” variety, or by coordinated central bank purchases of stocks, futures, ETFs, etc.

The momentum has clearly shifted to the risk-off safe-haven assets such as precious metals and sovereign bonds. This flood-tide of cash into bonds has helped push yields into negative territory, an unprecedented development: owners of capital are so concerned about getting their money back that they are accepting negative returns, i.e. guaranteed losses, to park their cash.

In effect, capital is focusing less on earning a return on cash and more on making sure the cash is returned. Paying 1% for the privilege of parking capital is making cash and gold look attractive, as the cost of holding cash and precious metals is relatively modest, and the upside is potentially significant.

What has caused this sea-change in risk appetite and sentiment?  A number of fundamental dynamics now in play globally.

What worked so effectively in the aftermath of the 2008-09 Global Financial Meltdown is no longer working: lowering interest rates and pumping more money into the financial system is no longer sparking risk-on animal spirits. Rather, pushing these monetary policies to new extremes is now perversely generating negative consequences: rather than pushing growth higher, the policies are causing stagnation in the real economy and unhealthy speculative frenzies that last a few days or weeks.

John Rubino recently covered the diminishing returns on Abenomics in Japan: Something Huge Is Coming From Japan. Policies that were intended to expand exports by driving the Japanese yen down have failed, as the yen is drifting higher despite ever-greater policy extremes.

In China, the solution that worked in the past—expanding credit to new extremes—has not generated real growth in the real economy. All it has accomplished is yet another housing bubble in Tier 1 cities and a speculative hot-money frenzy as cash sloshes from one asset class to the next in rapid succession. Not only are the positive returns on these monetary policies diminishing; these new extremes are unleashing new systemic risks in global markets. Kyle Bass expects a devaluation in China’s currency that is beyond the control of its central bank, and Analyst Andy Xie believes "China Is Headed For A 1929-Style Depression" as a result of its unprecedented expansion of debt.

In Europe, the same “whatever it takes” monetary easing policies that sparked a global risk-on rally in 2012 have failed to spark real growth in Europe or save its banking sector:  EU Banks Crash To Crisis Lows

The Social Contract Is Unraveling

Around the world, the message being sent to the average citizen is “the lifestyle you ordered is out of stock”. The promises of rising consumption, steady employment, secure pensions and guaranteed healthcare are running aground on the unwelcome reality that promises made decades ago can no longer be kept in a world of limited resources, stagnant growth, negative demographics and rising income/wealth inequality. 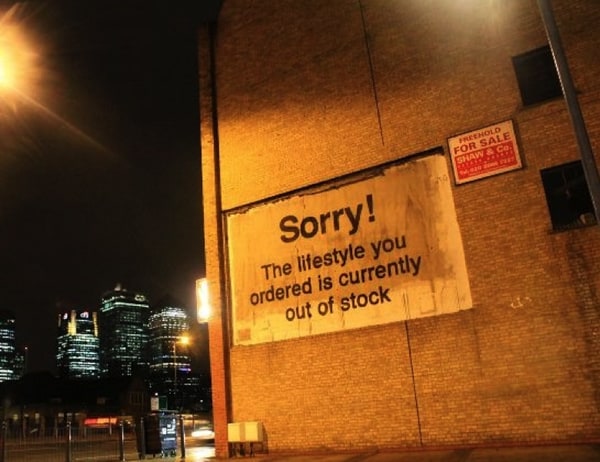 The status quo promised that growth could be restored and its promises fulfilled with extraordinary monetary and fiscal policies, but now that the returns on these policies are diminishing, people are waking up to the reality that the “good old days” of cheap, abundant energy and steady expansion of consumption, jobs, profits and taxes are over.

People are also waking up to the reality that these unprecedented monetary policies have exacerbated income/wealth inequality, as the few with access to near-zero-cost credit have scooped up productive assets that have boosted their income and wealth at the expense of the many without access to what I call free money for financiers.

The failure of these policies to accomplish anything but widen the income/wealth gulf has de-legitimized not just the policies but the institutions that issued them: central banks and states.

Rather than lay out a practical solution to the demographic/resource constraints that required proportionate sacrifices from everyone, central banks and states have continued to promise what amounts to a free lunch—borrowing our way to prosperity by borrowing from future earnings and future taxpayers.

The moral and financial bankruptcy of this policy is now evident to all, and the result is profound uncertainty. This uncertainty is no longer short-term, as people have lost faith in the promise that yet another expansion of monetary policy will fix what’s broken.

It’s an investment maxim that "markets don’t like uncertainty," and now that the limits of extreme monetary policies are self-evident, uncertainty stretches far beyond any political time horizon.  Any confidence that another interest rate cut or another quantitative easing asset purchasing program will magically restore flailing risk-on animal spirits is fleeting, for a very good reason: there is no reason to place any long-term confidence in policies that are so obviously yielding diminishing returns.

The realization that conventional monetary/fiscal policies have failed those who have been turned away from the 'free money for financiers’ banquet is fueling political rebellion against the status quo. This global grassroots movement has found expression in the recent Brexit vote in the United Kingdom and in the rise of anti-establishment politicians and parties around the globe.

Profits Are Declining for Structural Reasons

The ultimate foundation supporting risk-on assets is rising profits: as profits increase, stocks rise and the multiples of valuation expand.  Higher stock prices fuel a self-reinforcing virtuous cycle feedback in which hot-money speculators pile in, pushing prices higher, and companies are able to issue more debt to buy back their own shares. This reduction in outstanding shares pushes the per-share value higher, which then fuels more speculative buying, and so on.

Now profits are harder to come by for a number of reasons. The best way to visualize this stagnation is the S-Curve: rapid expansion leads to a boost phase in which everything goes right. But inevitably, the fuel for this expansion is consumed, and growth stagnates and then rolls over. 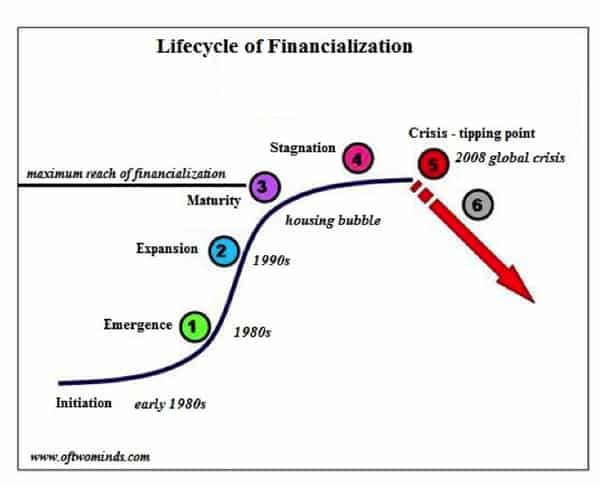 In the classic investment cycle, some new engine of growth emerges to re-energize a stagnant economy.  Over the past 35 years, the new engines of growth have been favorable demographics, financialization, the rise of the Internet, and the emergence of China/India/emerging markets (globalization).

Now that financialization and globalization have run their courses, the central banks and states have attempted to restart growth with debt.  Injections of new credit work wonders when economies are lightly indebted, but once they’ve become heavily indebted, adding more credit/debt accomplishes less and less in the way of sustainable real growth.

Globalization has expanded productive capacity to the point that most sectors of the global economy suffer from excess capacity. This makes it harder to extract a premium, i.e. profit, for producing goods and services.

The rapid advances in software and automation are gathering speed as these technologies are commoditized, meaning they are becoming cheaper and more abundant. Markets that are commoditized offer few profits, as somebody somewhere else is producing the same goods and services for less.

This Sea-Change Results In Dangerous Waters Ahead

These trends cannot be reversed with yet another rate cut or another “whatever it takes” announcement of central bank bond purchases. Greater volatility and uncertainty are baked in the cake at this point as what worked before fails to produce the rescues it once did.

For the individual investor looking to preserve capital, these will be treacherous waters to navigate. Not only is another crisis approaching, but it will not unfold similarly to the one in 2008. With the greater pressures in play now — economically, demographically, resource-wise, and politically — the fracture lines will be different and likely more disruptive.

In Part 2: Investing For Crisis, we identify the biggest risks and most important strategies for individual investors to be aware of as they navigate the dangerous waters ahead. What are the biggest threats? Where are the safest havens likely to be? What's most likely to happen with stocks, gold, and the dollar?