“A bully is always a coward.”

The current market rally is like a playground bully; shoving to the ground anyone in its path.

But like all bullies, the braggadocio belies an underlying cowardice.

Those in charge of the status quo must be absolutely terrified to resort to the unnatural lengths they are going to right now to keep the current rally intact.

In reaction to the brief market correction that occurred at the end of 2018, emergency measures were enacted to get stocks moving higher again.

Notably among the scramble to rescue the markets, the Fed pulled a very public and embarrassing policy U-turn, abandoning its short-lived program of planned interest rates hikes designed to start ‘normalizing’ its balance sheet after a decade of flooding the economy with stimulus. Quantitative Tightening, we hardly knew ya …(sniff)

In response to the efforts of the Plunge Protection Team, the Fed, its siblings in the global central banking cartel, the cheerleading media, and the Trump administration, the markets roared back strongly at the start of 2019.

So strongly, in fact, that 2019 has seen the best start to the year for stocks EVER IN HISTORY.

At this point, the major indices have recouped all of their losses from their December lows and are now back touching their all-time highs.

So…mission accomplished, right? Surely the financial swat team deployed at beginning of the year can stand down and go celebrate over a few well-deserved brewskis?

Not if you’re watching closely. In fact, the efforts to prop up stocks continue to become more frequent, more overt, and more extreme.

As mentioned, the Fed has executed a complete 180-degree policy turnaround in light of the market’s feinting swoon last year. Suddenly, it can’t appear dovish enough:

And to convince investors how serious it is about keeping the punchbowl spiked, last month it trotted out not just the current Chair, but the past two as well, to tell the nation not to worry.

You might think that would be sufficient to drive the point home. But hardly a day goes by now without some Fed spokesperson appearing in the media to implore the public to keep the faith. Yesterday, that chore fell on the shoulders of Richard Clarida, the Fed vice-Chair, who went on CNBC to tell us “the economy’s in a good place” and that he sees no risk of recession.

If everything’s going so great, why the need to nervously sell that story to us every day?

It’s similar to when my high school daughter suddenly starts telling me how “fine” the family car is. Pretty soon, I’m off the couch and into the driveway, checking for scrapes, bent fenders, and bloodstains.

Pumping By The Trump Administration

It sure seems that the new Fed song-sheet was written by the Trump administration which, for good or ill, has made the S&P 500 the benchmark by which it wants its performance judged.

Presidential economic advisor Larry Kudlow is taking the Fed’s current dovishness and running with it for all he’s worth, recently making the incredibly bold/reckless prediction that there will be no more rate hikes in his lifetime (Kudlow is 71).

Not to be outdone, President Trump is not only calling for an end to hikes, he’s cajoling the Fed to re-start Quantitative Easing.

Reflect on that for a moment. Ten years into the longest economic expansion in history, when the market is at all-time highs and the unemployment rate is at all-time lows, the President of the United States is calling for measures that are the monetary equivalent of using a de-fibrillator on a dying patient.

What the hell are they so afraid of that they’re willing to overtly campaign for such emergency triage?

Regular readers of this website are well aware that the despite the ongoing parade of sound bytes in the media to convince us that all is fine, the macroeconomic situation is grim and deteriorating fast.

The outlook for global economic growth looks dismal. The IMF just cut its outlook to the lowest level since the 2008 crisis. Q1 US GDP looks like it will be lucky if it clocks in 1.4%.

Retail investors are fleeing stocks, despite the tremendous rebound in prices. Without the $1 trillion dollars in buybacks last year, stocks would be nowhere near today’s prices. In fact, Goldman Sachs has warned that any of the currently discussed proposals to restrict buybacks risks crashing the entire market.

Taken together, how do all of these justify today’s market prices?

Again, regular readers of this site are familiar with the recent warnings we’ve been posting about the radical compression happening with the prices of the major stock indices. Such compression is a highly reliable indicator that a breakout move is coming.

Could the markets break higher? Sure, but what will compel them to? What new burst of optimism is not already priced in with the current euphoric assumptions already underlying today’s ludicrous prices?

We’ve been closely tracking the work of Sven Henrick, who recently posted this trendline chart of a ‘quadrupal confluence’ suggestive of “a massive technical reaction that will take place there at a point where key individual stocks would be massively overbought and disconnected from the underlying economy”:

If the indices break down below this rising wedge (a bearish technical indicator in itself), Sven fears a 30% correction is possible. (For the record, he puts a 5 to 7% chance the indices break out above the wedge)

The Appeal Of Income & Hard Assets

So when the market is at such a treacherous point, what alternatives make sense?

Stepping to sit on the sidelines in cash is not a bad option here. Just consider putting it in a solution like TreasuryDirect, where it can be well treated and earn 20x or more interest than what your bank will pay you.

But as we’ve written about a lot recently, the speculative game we’ve been trained to play over the past few decades, investing in stocks (often in companies without earnings and/or pay no dividends) and counting on them to appreciate substantially, may indeed be ending for a long time.

In the coming new era, protecting the purchasing power of your wealth and building it though inflation-adjusting income will become increasingly essential as a strategy.

Which is why we’ve been hard at work recently issuing more educational content on hard assets, especially those that produce income. Our goal is to get you up-to-speed now, so that you can position yourself prudently before the market breakdown warned of above happens. After it does, only those who were smartly positioned in advance will be able to purchase great-value investments at much lower prices than today.

Two recent resources in particular are worth engaging with if you haven’t already.

The first is our newly-issued Primer On How To Buy And Store Gold & Silver. It’s completely free and is a must-read for anyone who’s new or inexperienced with purchasing precious metals.

The second is our in-process webinar series on real estate investing. Real estate offers a time-proven path to building wealth from inflation-adjusting (and often tax-advantaged) income. You can access past episodes here (two-hour Episode #1 is free to watch).

Here’s a short 4-minute clip from a recent episode demonstrating how practical and useful the material is (in this case explaining the importance of the Gross Rent Multiplier and how to calculate it):

Our main point here is the current market juggernaut can’t continue at this rocketing trajectory. And the unnatural acts required to keep things elevated are going to fail at some point, likely very soon judging from the compressed chart trendlines.

The time for prudent action is now, before the breakdown. For certain get yourself educated. And if your studies reveal that immediate action is required, don’t delay. 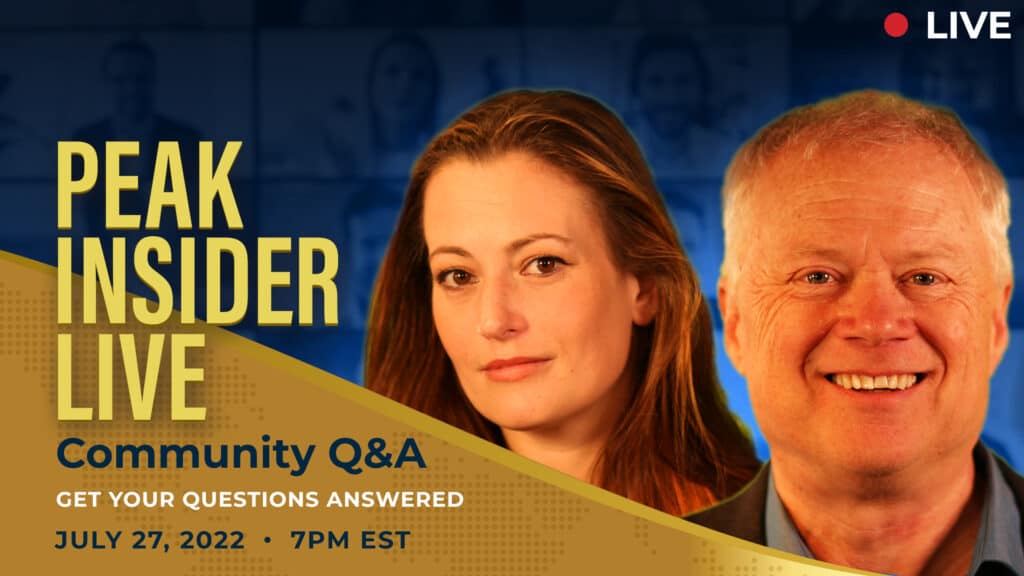