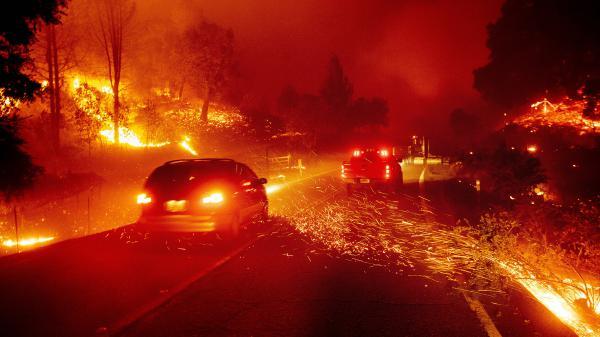 As I type this, there are over 16 large wildfires currently burning across northern and southern California. Hundreds of thousands of residents have been displaced. Millions are without power.

My hometown of Sebastopol, CA underwent mandatory evacuation at 4am Saturday night. I jumped into the car, along with our life essentials and our pets, joining the 200,000 souls displaced from Sonoma County this weekend.

Even though I write about preparedness for a living, fleeing your home in the dead of night with a raging inferno clearly visible on the horizon drives home certain lessons more effectively than any other means.

And I’d like you to be as prepared as possible should one of those happen to you, which is statistically likely.

Your survival, and that of your loved ones, may depend on it.

As mentioned, I’ve spent years advising readers on the importance of preparation. Emergency preparedness is Step Zero of the guide I’ve written on resilient living — literally the first chapter.

So, yes, I had a pre-designed bug-out plan in place when the evacuation warning was issued. My wife and I had long ago made lists of the essentials we’d take with us if forced to flee on short notice (the Santa Rosa fires of 2017 had reinforced the wisdom of this). Everything on these lists was in an easy-to-grab location.

The only problem was, we were 300 miles away.

Reality Rule #1: You Will Be Caught By Surprise

There are too many variables that accompany an unforeseen disaster to anticipate all of them. Your plan has to retain enough flexibility to adapt to the unforeseen.

In my case, we were down at Parents’ Weekend at Cal Poly in San Luis Obispo, where my older daughter recently started her freshman year.

As the text alerts warning of the growing fire risk started furiously arriving, we monitored them closely, reluctant to leave the festivities and our time with our daughter. But once the evacuation warning came across, we knew it was serious enough to merit the 6-hour mad dash home to rescue what we could.

The upside of that long drive was that it gave us time to alter our bug-out plan according to the unfolding situation. We decided my wife and younger daughter would go directly to safety; that reduced the lives at risk in the fire zone down to just 1 (mine). And I used the phone to line up neighbors who could grab our stuff should I not be able to make it home in time.

The learning here is: Leave plenty of room in your plan for the unexpected. If its success depends on everything unfolding exactly as you predict, it’s worthless to you.

Reality Rule #2: Things Will Happen Faster Than You’re Ready For

Once an emergency is in full swing, things start happening more quickly than you can process well.

Even if developments are unfolding in the way you’ve anticipated, they come at an uncomfortably fast rate that adrenaline, anxiety and fatigue make even more challenging to deal with.

Just as The Crash Course chapter on Compounding explains how exponential problems unfold too fast to avoid once they become visible, it’s very easy to get overwhelmed or caught off-guard by the pace required to deal with a disaster.

It went from “nothing to worry about” to “get out NOW!” in less than 48 hours.

Watching who fared well during the evacuation and who didn’t , those who took action early out of a healthy sense of caution had much more success than those who initially brushed off the potential seriousness of the situation.

Here’s how much of a difference timely action made:

The ‘evacuation warning’ advisory became a ‘mandatory evacuation’ order at 4am on Saturday night. My car was ready to go and I was on the road out of town within 5 minutes.

Several friends of mine left home just 45 minutes after I did. By that time, the fleeing traffic made the roads essentially immobile. My friends had to turn back to ride things out in their homes, simply hoping for the best.

So I’m reminded of the old time-management axiom: If you can’t be on time, be early. In a developing crisis, set your tolerance level for uncertainty to “low”. Take defensive measures as soon as you detect the whiff of increasing risk; it’s far more preferable to walk back a premature maneuver than to realize it’s too late to act.

Reality Rule #3: You Will Make Mistakes

Related to Rule #2 above, you’re going to bungle parts of the plan. Stress, uncertainty and fatigue alone pretty much guarantee it.

You’re going to forget things or make some wrong choices.

Case in point: as I was evacuating, the plan was to take a less-travelled back route, in order to reduce the odds of getting stuck in traffic. But, racing in the dark and checking in on the phone with numerous friends and neighbors, muscle memory took over and I found myself headed to the main road of town. Too late to turn back, I sat at the turn on, waiting for someone in the line of cars to let me in.

It then hit me that perhaps no one might. Folks were panicked. Would someone be willing to slow down to let me go ahead of them?

Obviously someone did, or I wouldn’t be typing this. But that mistake put everything else I’d done correctly beforehand in jeopardy.

So, as the decisions start to come fast and furious, your key priority is to ensure that you’re focused on making sure the few really important decisions are made well, and that the balls that get dropped won’t be ones that put your safety at risk.

Forget to pack food for the cat? No big deal, you’ll find something suitable later on. Miss your time window to evacuate, as my friends did? That could cost you your life.

Reality Rule #4: When Stressed, All You Care About Is People & Pets

But when the stakes escalate, you quickly don’t care about any of those. It’s only living things — people, pets & livestock — that you’re focused on.

The rest, while valuable to have in an evacuation, is ultimately replaceable or non-essential.

I very well might have rolled the dice and stayed down at Cal Poly if it weren’t for the cat. But family is family, no matter how furry. I just couldn’t leave her to face an uncertain fate. And I believe strongly you’ll feel the same about any people or pets in your life — it’s a primal, tribal pull to take care of our own. If you don’t plan for it, it will override whatever other priorities you think you may have.

So prioritize accordingly. Build your primary and contingency plans with the security of people and animals first in mind. If there’s time for the rest, great. But if not, at least you secured what’s most important (by far).

Beyond the universal rules above, my current experience as an evacuee has emphasized the out-sized importance of several essential resources for those bugging out. These are the things that have proved most valuable during and after the emergency evacuation.

I will share these in tomorrow’s post (update: this post Essential Bug-out Resources can now be read by clicking here). But before I do, I want to express my thanks for the many of you who have sent well-wishes and offers of assistance. Literally hundreds of friends, acquaintances and near-strangers have contacted me via email, text, social media and PeakProsperity.com over the past 72 hours. I’ve received offers to put up my family from folks throughout California and 4 other states. It has been a tremendous honor to be on the receiving end of such kindness.

So many of you who have asked “What can I do to help?”. Personally, I’m safe and being well-cared for where we’re currently staying.

But I’ll be honest: the gesture that would benefit me (and my business partner Chris Martenson) the most at this point would be for anyone with the means and interest to purchase a premium subscription to PeakProsperity.com.

The thrash that these fires are inserting into my bandwith is impacting PeakProsperity.com at an important time, when Chris and I are taking big strategic steps to substantially expand this website’s audience and offerings.

So if you want to help us with that mission, while enjoying valuable insight in return, please subscribe. Even just for a single month.

Signing off until tomorrow…

Overcoming Inflation In The Fourth Turning