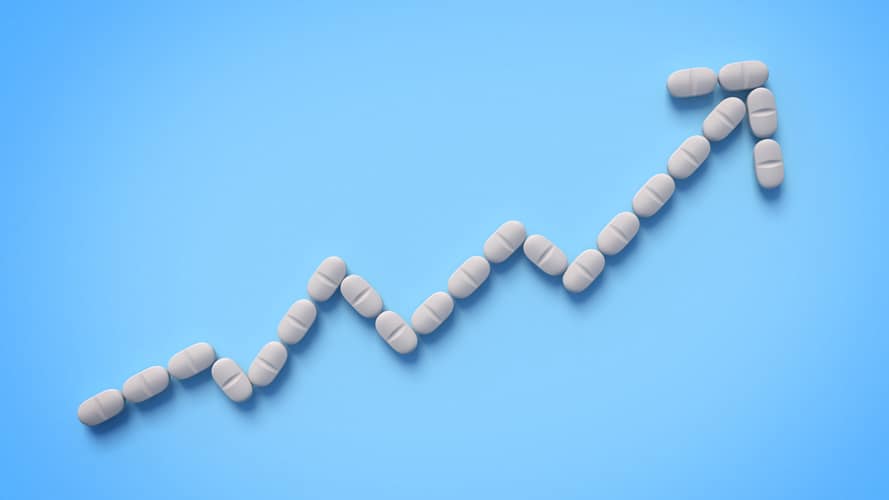 I’ll lead again with my new focus: rate increases.  Where are we? 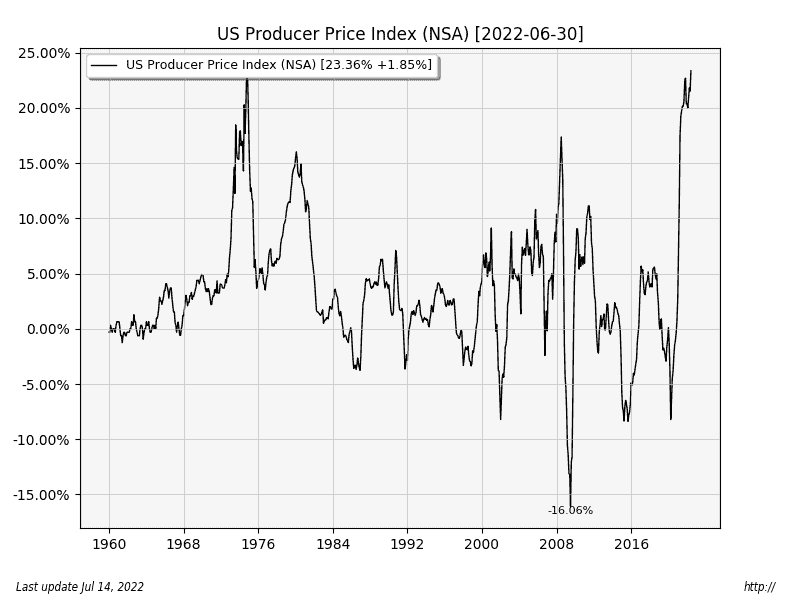 Wolf has a good breakdown of “where the inflation is” here (click to read).

Here’s a chart from the Energy Information Administration (EIA), inspired by another column by Wolf Richter (click to read).  His column talks about recent gasoline demand destruction due to absurdly high gasoline prices (up 63%), and a modest increase in electric vehicle (EV) sales – up 66% from last year, to a total sales market share this year of a modest 5.6%, while internal combustion engine (ICE) vehicle sales fell by 21% – but EV as a percentage of vehicles-on-the-road are a tiny fraction of total autos.    The chart below clearly shows lower gasoline product demand vs 2019. 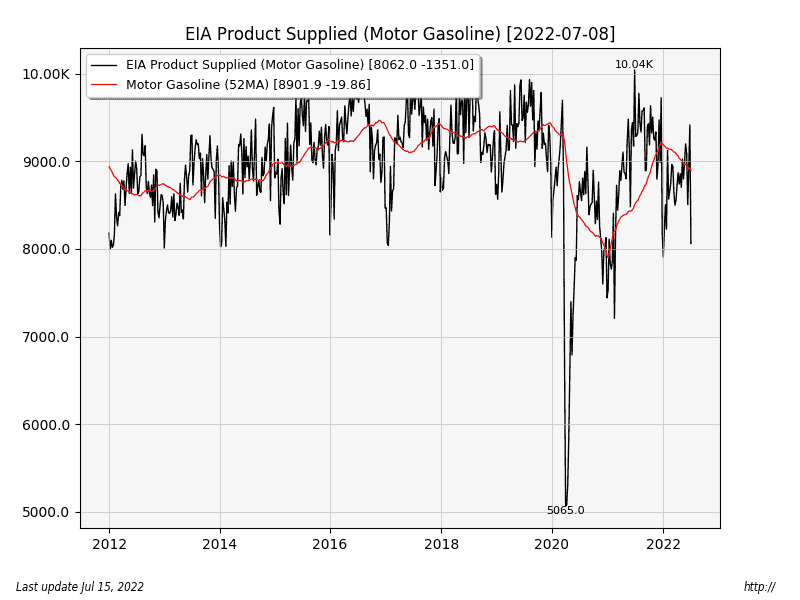 The WEF-Biden-Handlers continue to drain oil from the strategic petroleum reserve (SPR) at around 1.4% per week, which will leave the SPR empty in 70 short weeks.  The WEF has managed to infiltrate their mostly-stupid Young Global Leaders into the West’s cabinets, and the US batch are dutifully following orders by emptying our critical-for-national-defense strategic reserve with no emergency in sight, and no rationale at all.  And Congress isn’t saying boo, because they’re apparently owned & operated by the WEF Uniparty, or that Utah Server Farm, or those Epstein Tapes, or – heck – maybe the Chinese Communist Party (CCP).  Its hard to know which.  But one thing is for sure: they aren’t working for You and Me.  SPR: on track to be completely empty in 70 weeks. 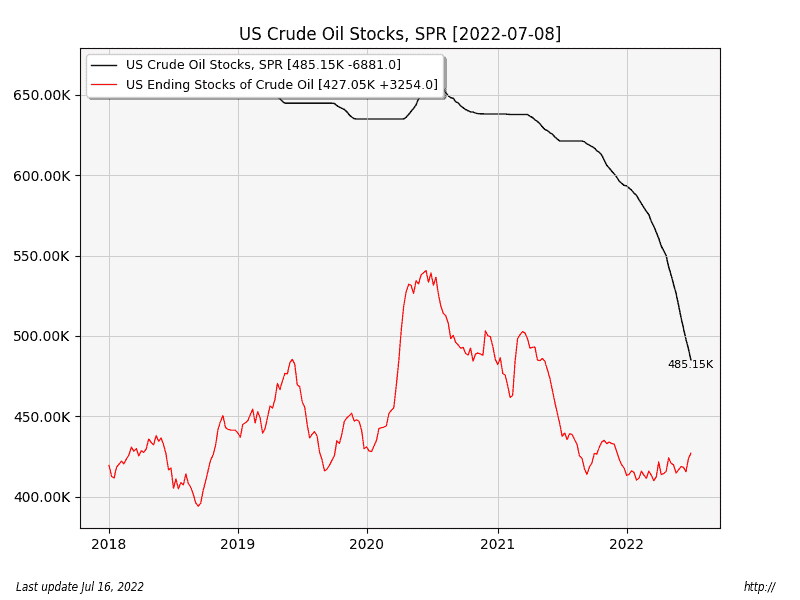 The unexpectedly hot CPI print on Wednesday encouraged silver to rally, but the banksters were not pleased, and on Thursday they smashed the price of paper silver lower (by around 80 cents) for its impudence in attempting to rally on the back of the hot inflation data.  Silver’s $18.01 Thursday low was a 23-month low.  This, with inflation at 23%.  Of course actual silver (say, silver eagles) are somewhat more expensive than the paper stuff at COMEX: today they cost $31.11 per eagle, which is a 63.39% premium vs COMEX paper (source). 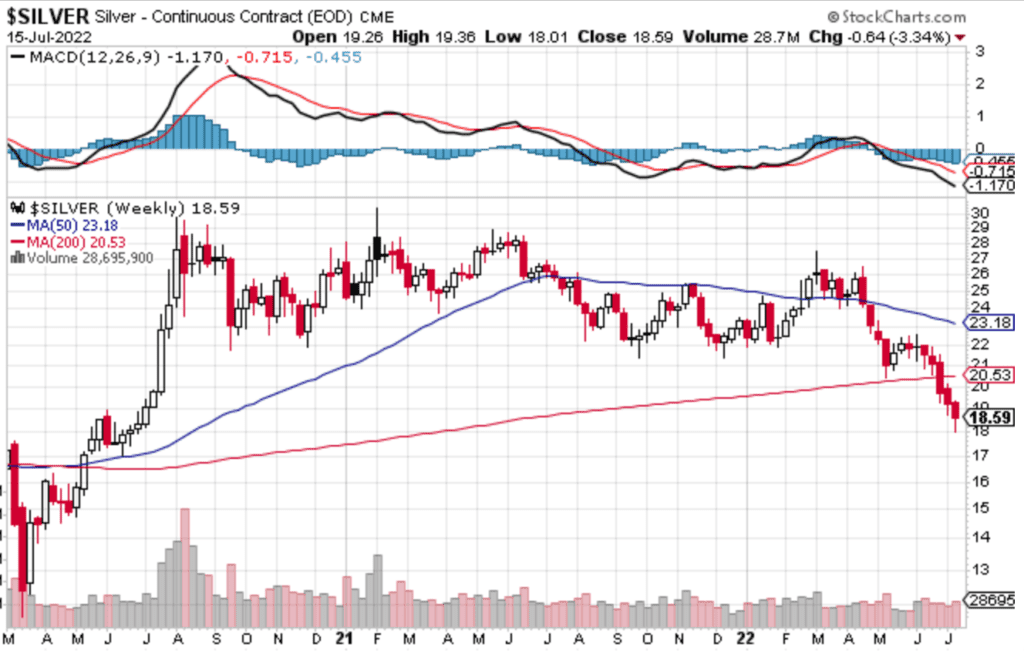 That’s quite the premium!  Assuming you want actual silver, mind you, rather than trusting in some WEF/bankster promise in these chaotic times.  “Oh yes.  We’ll deliver silver.  We promise.”  Unless of course the rules change.  Which they always do, when the banksters are under duress.  “Oh look I broke a nail! No Silver For You!”

Speaking of duress – I recall during the last crisis reading through my contract with my bank regarding my savings account.  Turns out, they were able to basically impound the contents of my savings account, for some reason, or no reason at all, for up to 90 days.  They had no such power over my checking accounts.  Not all accounts are the same.

The other important items:

Of all of these – I pick copper’s ongoing plunge, and the 1-10 yield curve inversion.  I’m going to claim that “copper = China”, and in support of this thesis, I point to the turning point in copper, which dates back to just after the Shanghai lockdown started at the end of March (source). 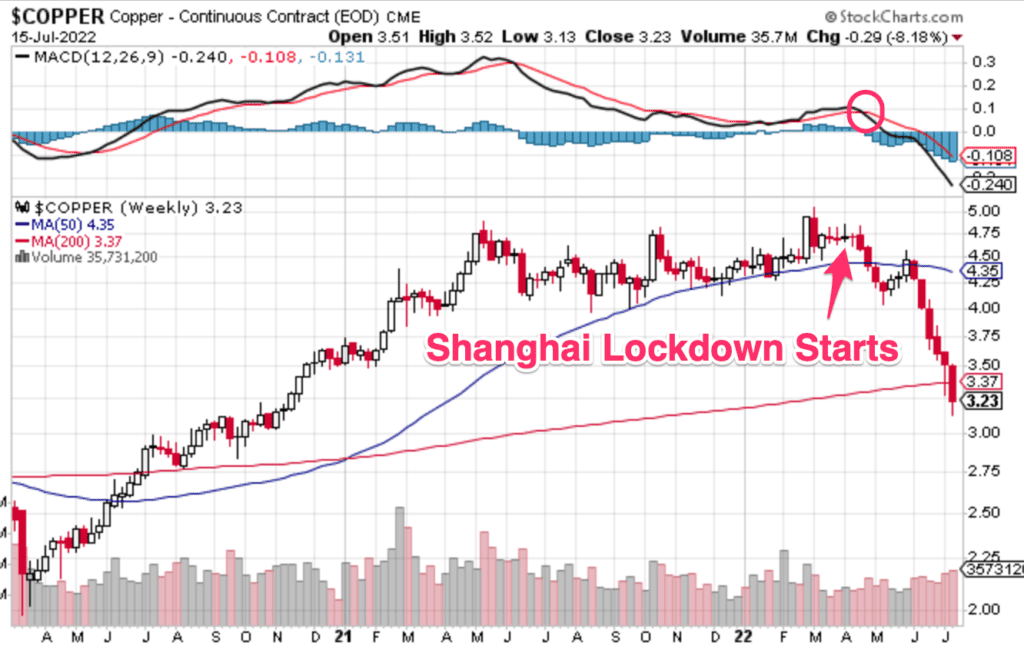 More on this thesis: I claim that mostly, China = growth, and specifically, China’s property construction = a big part of global commodity demand growth & “inflation.”  This appears to be ending.  The Shanghai Lockdown might well have been just the specific mechanism that Engineer Xi is using to convince his people to stop with the property construction bubble behavior.

“I’m going to wipe out your unproductive, property-bubble ‘savings’ mechanism, but I’ll blame ‘COVID’ for it.  Ultimately it is YOUR fault for getting infected.  You just wiped out  your own savings by your collective virus-carelessness.  Yay COVID-ZERO!”

Think maybe the higher-ups in the CCP already know this?  And might have been front-running this since early April?

So – we have China’s highly deflationary 20-year real estate construction bubble pop (destroying a large amount of construction-commodity demand, as well as China-Plebe savings) which meets a Fed determined to raise rates to 3.25% over the next four months.  And now we see some (belated) gasoline demand destruction at $5/gallon, plus an inverted US Treasury 1-10 yield curve, plus a topping CRB, both of which signal an impending recession.

And of course this doesn’t include Chris’s currency crises, which are knock-on consequences of rapidly unwinding leveraged currency bets, as well as capital flight out of what-are-now much riskier countries.  One tiny example: Germany is about to lose 55% of its natural gas supply.  No Manufacturing For You, Germany!  (I predict the German government changes course.  No way they allow their carefully constructed manufacturing industry to die due to stupid NATO/WEF policies imposed by the outside.  Even if they are currently run by the “Greens” party.  If they tried, they’d be literally annihilated at the polls.  Germans are a pragmatic people.  Green or no green.)

Then again, I didn’t think much of the “Ukraine War” before it happened.  So I could be wrong!  Do you get the sense there’s a lot to keep track of?

Brought to you by the “populist right” + “populist left” working together.

An issue: the formerly “rebel” Five-star party went along with the Draghi/vaccine-mandate/Technocracy, and boy are the Five-star voters pissed.  Five-star got 33% of the vote last time, but they are polling at just 12% now. That’s an object lesson: when populists let themselves get co-opted by WEF/Technocracy, they lose their popular support.

Fox News host Tucker Carlson asserted Friday that the circumstances surrounding President Joe Biden’s dwindling mental capacity are far worse as the man was “like a small child” on the campaign trail until he was given “pills before every public appearance.

Joe Biden is heading back from an embarrassing trip to Saudi Arabia and the middle east. Putting aside the fact that physically and mentally Biden looked weak, foolish, and generally incoherent, in an odd way he was appropriately representative of the current of U.S. influence on the global stage.

At the NIH, doctors and scientists complain to us about low morale and lower staffing: …. “They have no leadership right now. Suddenly there’s an enormous number of jobs opening up at the highest level positions,” one NIH scientist told us.  The CDC has experienced a similar exodus. “There’s been a large amount of turnover. Morale is low,” one high level official at the CDC told us. “Things have become so political, so what are we there for?” Another CDC scientist told us: “I used to be proud to tell people I work at the CDC. Now I’m embarrassed.

Saudi Arabia, Turkey, and Egypt plan to join BRICS, and their potential membership bids could be discussed and answered at next year’s summit in South Africa, Purnima Anand, the president of the organization, told Russian media on Thursday.

All those Young Global Leaders who scored this monster “own-goal” on the West sure will go down in history.

… a rapidly increasing number of “disgruntled Chinese homebuyers” are refusing to pay mortgages for unfinished construction projects, exacerbating the country’s real estate woes and stoking fears that the crisis will spread to the wider financial system as countless mortgages default.

Bank of Canada Hikes by Monster 100 Basis Points, Hits Mortgages. So Might the Fed after US CPI Fiasco

To front-load the path to higher interest rates, the Bank of Canada today jacked up its main rate by a 100 basis points to 2.5%, the fourth rate hike in a row, and the biggest rate hike since 1998, which made the BoC the first of the G-7 central banks to raise by 100 basis points in this cycle.

So signals of impending recession right alongside some substantial projected and actual rate increases,  huge inflation in some sectors, demand destruction (gasoline, construction materials) in others, an incipient China banking crisis due to the Plebe construction-mortgage-payment rebellion in the middle of an ongoing real estate bubble pop, a number of Young Global Leader losses, dreadful weakness in US foreign affairs, claims about Joe’s before-appearance medicated senility (and a possible metaphor for the US), increasing interest in a new non-WEF currency, the ongoing traitorous draining of the SPR, and rumors of unrest at the NIH and CDC.

If this was a movie, how far would we be through the script?  Probably not even halfway?