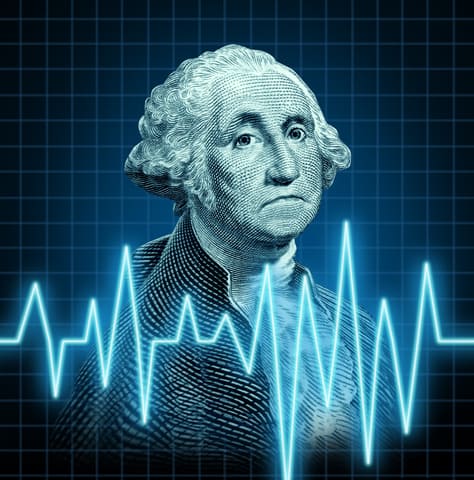 I have been trying to get my head around the mechanism of QE. Not being an economist or experienced investor I don't really understand a lot of the jargon. The usual simple definition of QE as "thin air money printing" does not satisfy my need for understanding either. Have hunted for a description of QE for dummies that leaves me feeling like I get it, but with no luck. My difficulty is in understanding how thin air money gets into circulation.

So I'm going to do my best to answer this plea in as intuitive and straightforward a manner as I can. I, too, share the need to understand the mechanism of a process in order to feel like I have a grasp of it.  And I think it's critically important to understand QE (also known by its full name, "quantitative easing") and what it really represents. Because it is, without a doubt, one of the largest market-shaping forces of our times.

Further, it presents extraordinary risks and may well turn out to be a decisive shaping process for the future, as well. And not in a good way.

Despite its sophisticated-sounding name, QE is nothing more complicated than the Fed buying "assets" from commercial banks and other private financial institutions.  I put assets in quotes because the Fed does not buy things like land, Stradivarius violins, diamonds, gold, or silver from these institutions, but rather various forms of debt.

There could well be other forms, too, but we currently have no visibility into the composition of the sizable portion of the Fed's balance sheet that comprises the "other assets" line.  I'll get into that in more detail in a minute.

First, here's the an explanation of QE:

A central bank implements quantitative easing by buying financial assets from commercial banks and other private institutions, thus creating money and injecting a pre-determined quantity of money into the economy.

Quantitative easing increases the excess reserves of the banks, and raises the prices of the financial assets bought, which lowers their yield.

The reason that QE differs from normal monetary policy is that, in the normal case, the purchase of various bond types by the Fed does two things: It lowers interest rates, and it increases the amount of money in the system.

QE, on the other hand, cannot lower interbank interest rates any further than they already are, because they are at 0%.  So a different name is used for the process in which the only thing being eased is the quantity of money.  Hence Quantitative Easing (QE).

This is just a fancy way of saying that the central bank, via prior errors and miscalculations, has found itself stuck in a trap where it has lost one of its most potent tools: the price of money.  And now it can only fiddle with the quantity of money.

Here's a simple picture that I drew to illustrate just how simple this fancy-sounding process really is: 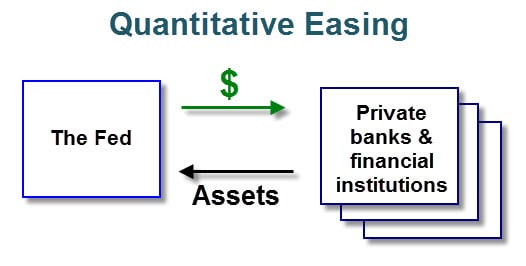 When the Fed performs this trick, what happens is that the assets end up on its balance sheet as – well, assets of course.  Luckily the Fed provides reasonable clarity in a timely manner on the expansion of its balance sheet.  So we can see pretty well what's going on here as it happens.

In graph form, we can see that the Fed's asset balance had been holding steady at around $2.75 trillion for a bit over a year.  But then the latest round of QE (QE4) began, which has swelled the Fed balance sheet above than $3 trillion – and it's way to (at least) $4 trillion by year end (2013). 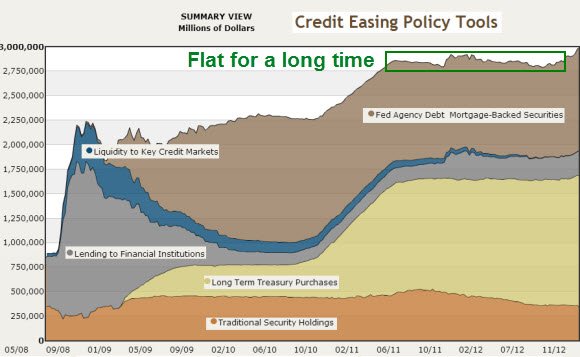 Here's a nice short description of the process of QE:

A central bank [performs QE]  by first crediting its own account with money it has created ex nihilo ("out of nothing"). It then purchases financial assets, including government bonds and corporate bonds, from banks and other financial institutions in a process referred to as open market operations.

The purchases, by way of account deposits, give banks the excess reserves required for them to create new money by the process of deposit multiplication from increased lending in the fractional reserve banking system.

The increase in the money supply thus stimulates the economy. Risks include the policy being more effective than intended, spurring hyperinflation, or the risk of not being effective enough, if banks opt simply to pocket the additional cash in order to increase their capital reserves in a climate of increasing defaults in their present loan portfolio.

The Price of Thin Air Money

At this point you might be thinking, where did the Fed get the money to buy these assets?  The answer to that is simple:  It was created out of thin air.  Or ex nihilo, if you want to use Latin to make it sound more official.

In these modern times, no actual paper money was created and exchanged, of course; just a few clicks on a computer keyboard.  And – voila! – billions and billions of dollars are created.

There are several critical risks to flooding the world with invented money.  Once we understand them, it becomes clearer how the Fed's decision to pursue QE has put it in a box, where its available options are becoming fewer and fewer.  And it explains why the Fed is continuing – and will continue until it simply can't – with its aggressive money printing.

In Part II: Why You Really, Really Need to Care about the Implications of QE, we lay out these risks and identify the markers you can follow to track them. We then detail how the QE process is destined to devolve and the implications this will have for your wealth and well-being.

To make our situation clear, we are living through the largest and most outlandish monetary experiment ever conducted by humans upon themselves.  These are extraordinary times, and no matter how many times the mainstream press tries to convince you that a rising stock market or a rebounding housing market implies that we are returning to healthy economic balance, don't fall for it.

The Fed is in uncharted territory, having created a monster it can no longer control.  In the process, it is blowing new asset bubbles that are benefitting those with first access to the newly-printed money (banks and corporations) at the expense of savers, pensioners, and anyone exercising fiscal prudence.  This, of course, is creating a vast and growing inequality between the top 1% and everyone else.

When this misadventure in monetary policy ends, as both math and history says it must, it will be messy, uncontrolled, and very painful for holders of just about every sort of finanical instrument out there (stocks, bonds, derivatives, etc).  That's why understanding the root causes and risks of QE is so important, in order to identify the best shelters for protecting the purchasing power of your wealth through this transition.