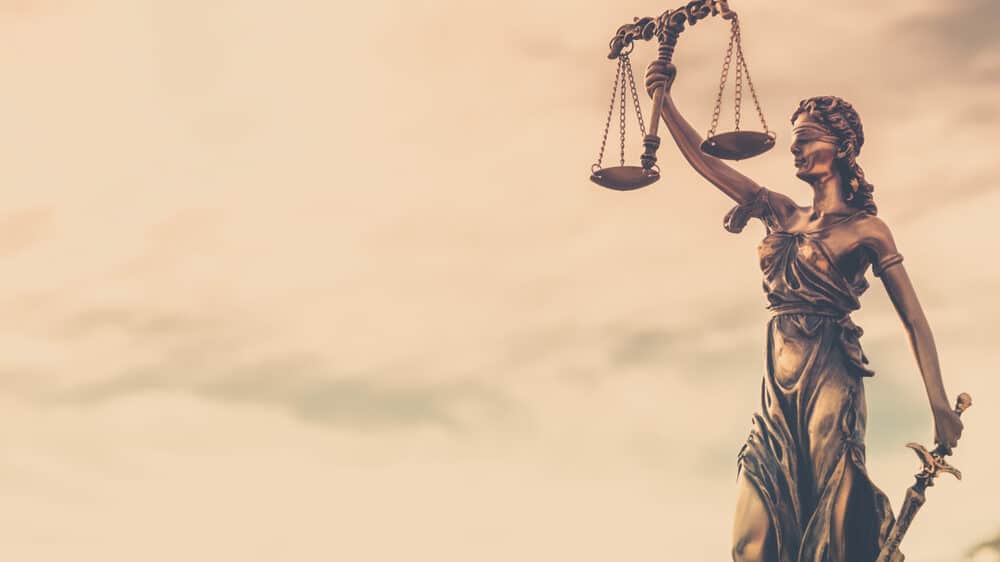 Payrolls were surprisingly strong on Friday; headline +528k, with about 250k expected. Of course, this bit of economic good news caused equities to sell off, along with gold, silver, and the 10-year bond. The initial sell-off was all about disappointment surrounding the much-hoped for “Fed Pivot” – theory being, the weaker the economy appears, the more likely the Fed is to stop raising rates and start printing money, which makes all the traders excited.

Of course the opposite happened Friday due to the “good news” of the surprisingly strong payroll numbers. The strong payrolls said: “no money printing coming soon.” That was bad news for the traders, and so prices fell. 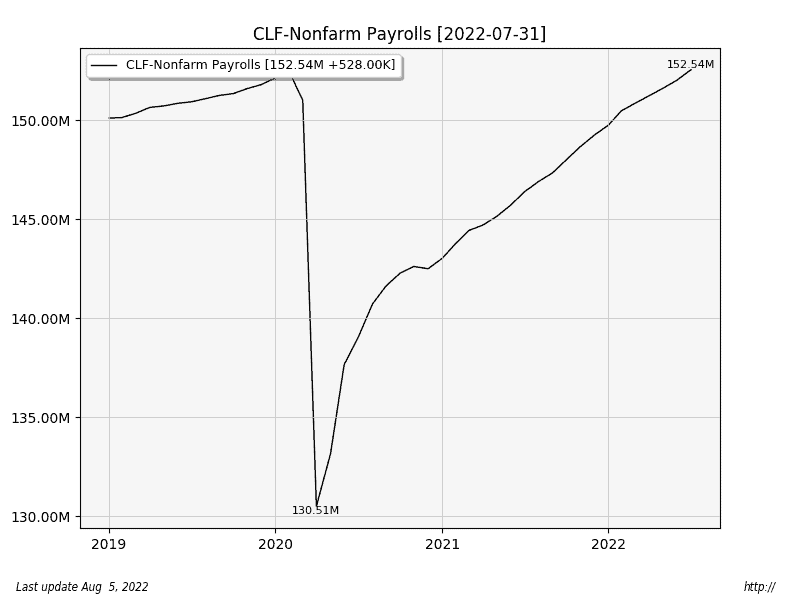 Wolf Richter has an article on point: Recession Mongers Shocked & Horrified by this Surge in Employment (Source). The most interesting part is his description of the “stuck” labor force: “Many folks, including the Fed, are now suggesting that the old normal labor force may never return, that there were permanent changes in the labor market that we’re just now trying to figure out.”

Hmm. Whatever could he mean?

Certainly, “something” definitely happened in 2021 to take three million people out of the labor force. “Overall, layoffs and discharges in June and in the prior months were at historic lows. And there are still large-scale staff shortages in the healthcare system, school systems, airlines, and many other industries.” Airlines and healthcare, huh? Let’s see. What happened in those two industries in 2021? Anyone remember?

Now, imagine we add the “excess mortality” among working age people that the life insurers were seeing in 2021, to the disability increase shown on the chart below: 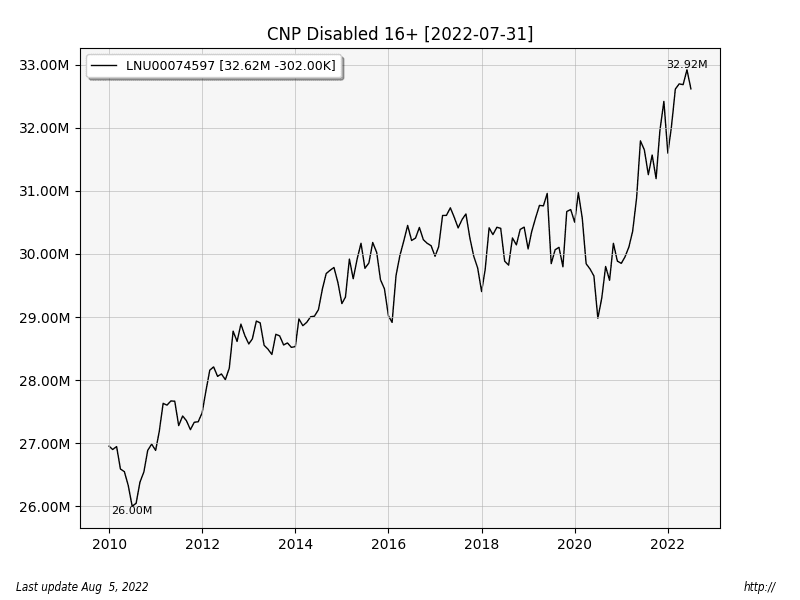 So, something else to add to your “shortages” list: labor, due to disabled and dead workers. I suspect this overhang of vax-disabled and vax-dead workers (thank you, mandates) will lead to continuing tightness in the labor market. Especially airlines and healthcare. We may even see this pick up more rapidly after the new “mRNA combo/no need for trials” covid-flu vaccines are deployed this fall. The more people sign up for the new shot, the “stronger” the labor market will be. Maybe with a three-month lag.

Apart from the initial sell-off on Friday (which was later mostly reversed), the “bad” payroll news didn’t affect equity market prices all that much in terms of the broader trend, which still appears to be “up”. At least for now. 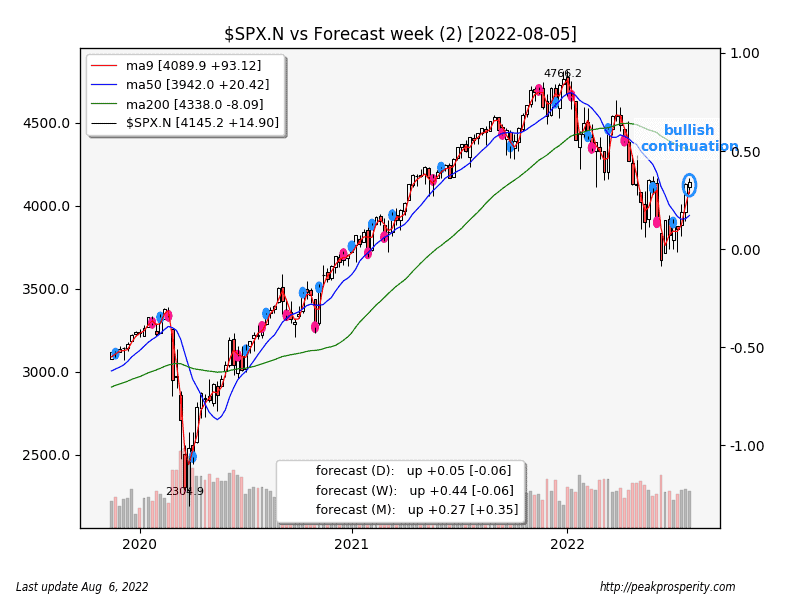 While gold fell $15.40 on Friday, it moved higher on the week, up $8.90 [+0.50%] – not much of a move either way. Perhaps more interesting is the very low level of Open Interest (blue line) for gold. Low OI levels usually happen around a price low – but the most recent drop in OI happened during a two-week gold rally, which is quite unusual. Perhaps a reason for this was the large number of Commodity Exchange (COMEX) deliveries that happened over the past few weeks – some 28,000 contracts. Could it be that something is afoot at COMEX? And the banksters don’t want to be short gold right now? It really was a big delivery month. Lots of COMEX deliveries are usually quite positive for gold. Not sure how that relates to pivots or recessions. Maybe it is independent? 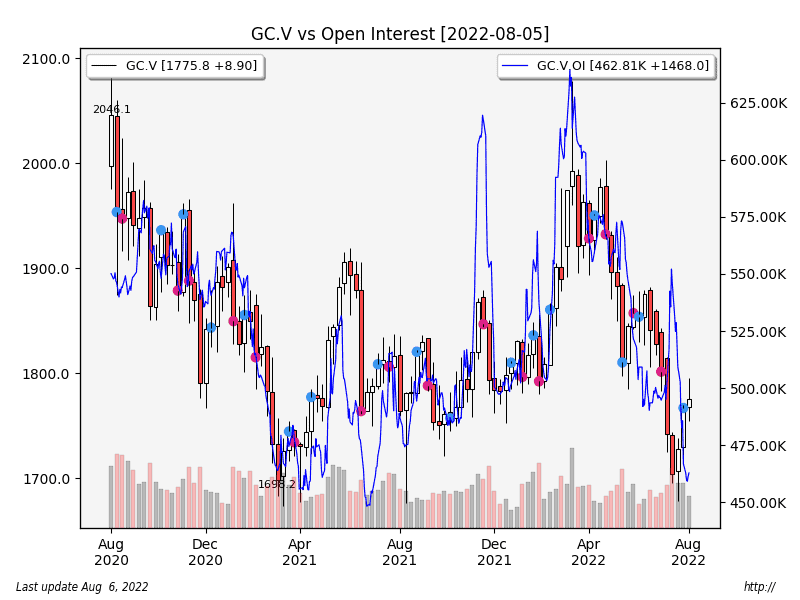 Crude sold off hard this week, dropping $9.61 [-9.74%] to 89.01. The big moves happened on Monday, Wednesday, and Thursday. Good-payrolls Friday was actually mildly positive for crude. This is a new six-month low for the master resource. Demand destruction? Draining the Strategic Petroleum Reserve? Groveling at the feet of Mohammed bin Salman? Russia successfully selling their oil through a myriad of back doors reducing the shortage? This week’s drop wasn’t just a “U.S. Paper Crude” phenomenon – Brent also lost about $9 this week as well. 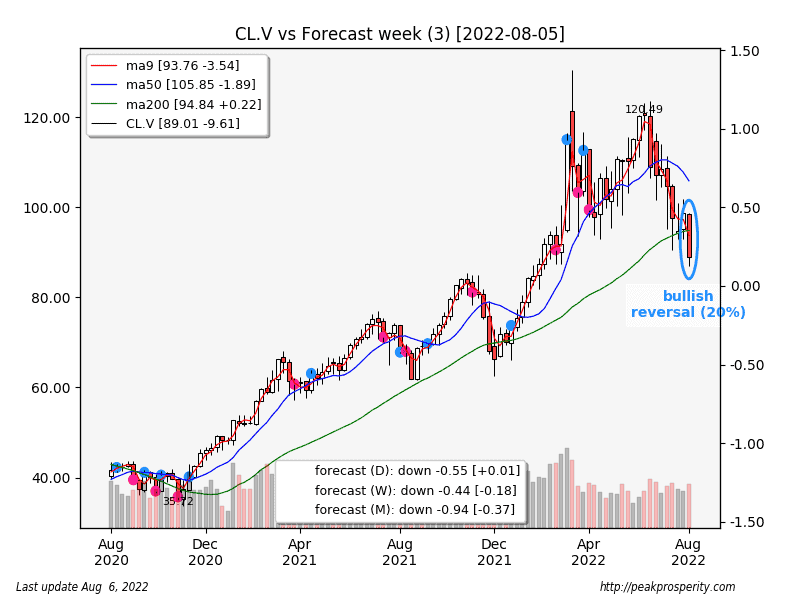 Possibly related: it was yet another week of the Biden-Handlers draining the SPR. However, the rate appears to be slowing; “only” 4.7 million barrels were sucked out this week, meaning it will be empty 100 weeks from now. So, I guess that’s good news; the beatings have slowed down, although they have not stopped. Perhaps China’s storage tanks are getting full? From what I can tell, “10 held by H for the Big Guy” continues to pay dividends to the Chinese Communist Party, although more slowly than last week. 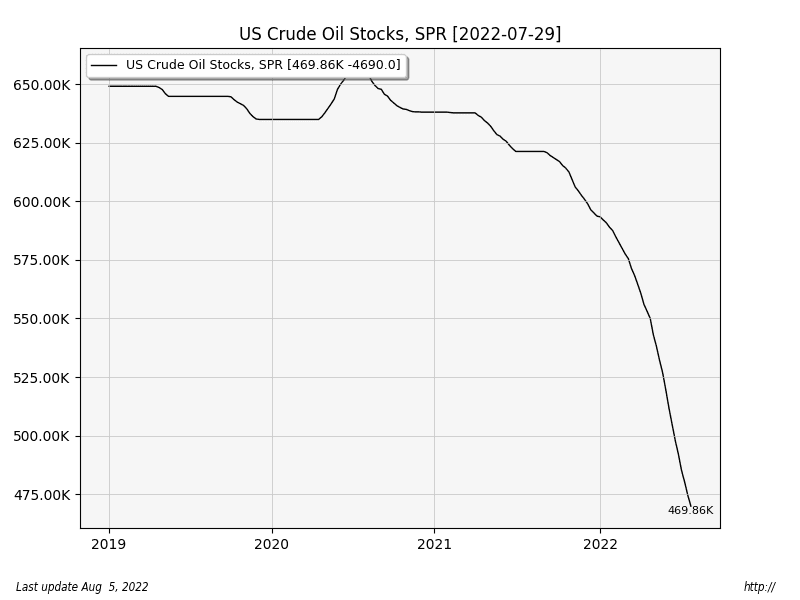 Copper fell $0.02 [-0.60%] on the week – copper did manage to rally on Friday, but it wasn’t enough to pull copper flat for the week. It occurs to me in looking at the daily chart (below), the rally over the past few weeks has the look of a dead cat bounce to it. Armstrong calls these “reaction rallies.” This doesn’t look positive. I’m still tempted to point to China, which is still deep in its once-in-a-generation real estate bubble pop, and probably will be dealing with it for the next several years.  Copper = China. 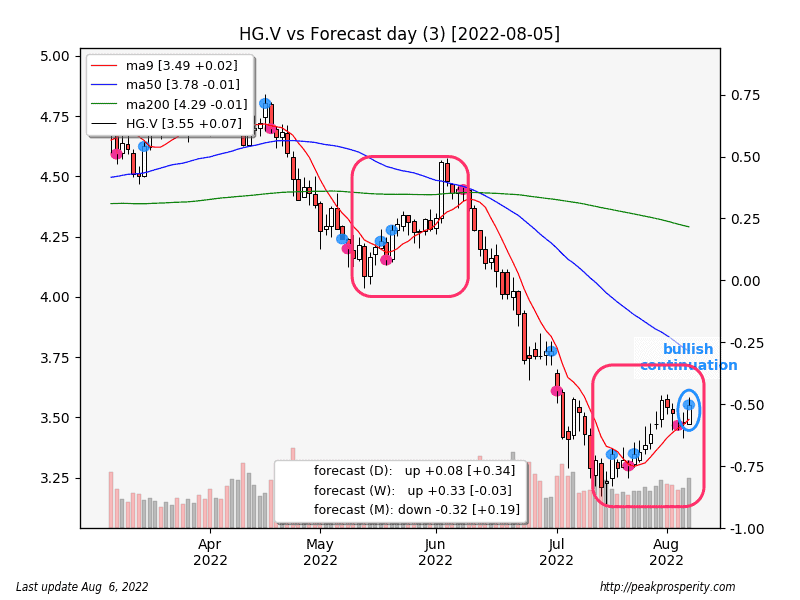 Lastly, the Bank of England decided to join the central bank rate-raise party, moving rates up by 50 bp to 1.75% on Thursday (Source).  This fragment from the BOE caught my eye: “The bank now expects headline inflation to peak at 13.3% in October and to remain at elevated levels throughout much of 2023, before falling to its 2% target in 2025.” So, a BOE rate increase to 1.75% is going to bring that 13.3% inflation under control? Or do we think it might require more?

It is a little bit ironic for the Biden-Handlers: “The U.S. employment numbers look great” because their vax mandates killed and injured so many Americans that the overall workforce shrank dramatically, and that caused the unemployment rate to drop.

Yay mandates! Unless, of course, you or a family member are disabled or dead.

‘Never Has America Faced A Greater Threat Than Donald Trump,’ Says Guy Who Started Two Wars And Shot A Dude In The Face (Source)

How furious Chinese Government officials responded to the Pelosi visit (Source); Why did Pelosi go? U.S. politics? Ending her career with a bang? Last gift to the neocons – an attempt to create a new war? A distraction from all those claims of insider trading? The CCP sure seems annoyed. When the fun is over, they have to go deal with their real estate bubble pop.

Stop the Clot, Spread the Word (Source); “Blood clots do not discriminate by age, gender, ethnicity or race. Blood clots affect everyone. Up to 900,000 people are affected by blood clots every year.”

The New Fall Flu Shot [Meryl Nass; 1:08m] (Source); “The new mRNA covid shot will contain three different strains of Spike protein, probably containing much more spike than the original covid shots. The flu shot will also contain four different strains within that too and these will be taken as a combination mRNA injection.”

Biden Administration Declares Monkeypox a ‘Public Health Emergency’ Across US (Source); “In the United States, there are ‘1.6 to 1.7 million’ people who are at the ‘highest risk’ of contracting monkeypox, according to the CDC director. She reiterated that homosexual men, namely those who are HIV-positive, appear to have the highest chance.”

California and Illinois declare states of emergency over monkeypox outbreak (Source); So – nobody is dying. And the case counts are still quite small. Might this be an election-year move of some sort? “We love GBT?” (L = not part of the high risk group). Is there some punchline I’m missing?

The U.S. Oligarchy’s “visible” strategy for this November:

And, perhaps, a new emergency of some sort.

Meanwhile, about the recession. I’m thinking now it won’t be a labor-force-driven recession, based on payrolls numbers anyway. That said, once those three million disabled people stop being gaslit by the (Safe and Effective) Sickcare system and start getting disability…I’m guessing that (massive) drag on the economy will trump any wage gains from the tight labor market. Plus, there’s a huge overhang of corporate liability to all those companies that mandated these killer “safe and effective” shots. What will that do to stock prices? The Oligarchy-owners of those companies will Not Be Pleased.

And one more thing. Post November 2022, how will all this vaccine injury and death affect the 2024 prospects of the Bad Orange Man?