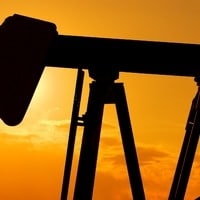 OPEC Has Lost the Power to Lower the Price of Oil

OPEC Has Lost the Power to Lower the Price of Oil

There’s been a lot of excitement in the past year over the rise of North American oil production and the promise of increased oil production across the whole of the Americas in the years to come. National security experts and other geo-political observers have waxed poetic at the thought of this emerging, hemispheric strength in energy supply.

What’s less discussed, however, is the negligible effect this supply swing is having on lowering the price of oil, due to the fact that, combined with OPEC production, aggregate global production remains mostly flat.

But there’s another component to this new belief in the changing global landscape for oil: the dawning awareness that OPEC’s power has finally gone into decline. You can read the celebration of OPEC’s waning in power in practically every publication from Foreign Policy to various political blogs and op-eds. David Ignatius of the Washington Post wrapped up nearly all of the recent claims in a nice bundle in his May 4, 2012 piece, An Economic Boom Ahead?, when he quoted PFC Energy’s David West:

“This is the energy equivalent of the Berlin Wall coming down,” contends West. “Just as the trauma of the Cold War ended in Berlin, so the trauma of the 1973 oil embargo is ending now.” The geopolitical implications of this change are striking: “We will no longer rely on the Middle East, or compete with such nations as China or India for resources.”

While it’s true that the Americas hold great promise to convert natural gas resources to higher production levels, that is not the case with oil. The celebration of a geo-political swing in energy power therefore misses a crucial point: No region — from OPEC to Non-OPEC, from Africa to Russia — has the single-handed ability to lower the price of oil now, because none can bring on new supply quickly enough for a long-enough sustained period of time. And there is more to this story than meets the eye.

For over 30 years, OPEC has produced less than half of the world’s oil. Indeed, as of today, OPEC produces only a little more than 40% of the world’s oil. But most of the world’s spare capacity has been held by Gulf State producers. Thus OPEC, primarily Saudi Arabia, has long been able to control the price of oil in not one, but two, directions. Historically this has meant that the concentration of oil pricing power resided with OPEC and its largest producer, Saudi Arabia.

But starting in 2005, global oil markets sensed that OPEC was only able to influence the price of oil in one direction: higher, by lowering output. OPEC’s ability to lower prices started to crack, break up, and generally fail as the first phase of oil’s repricing headed into 2008. Indeed, OPEC raised production several times in the 2004-2008 period, attempting to restrain oil prices as it moved to protect the global economy from an oil shock. However, the oil market, which was going through a fundamental transition at the time, as it reoriented itself towards insatiable, price-insensitive demand from Asia — paid little attention.

Instead, supply disruptions at small producers and in small regions had a greater influence on oil price (pushing it higher) than OPEC's influence on attempting to push the price lower.

It’s actually not clear that OPEC has had any measurable influence on restraining oil prices for years. Summer hurricanes in the Gulf of Mexico, unrest and outages in the Niger Delta, and various strikes presented greater upward pressure on oil prices than upward OPEC supply changes.

The Mythology of OPEC

There is a trailing cultural myth, therefore, (which is nothing more than a hangover from 30 years ago), that OPEC can mount swift, price-killing upsurges of production. But as the below chart shows, OPEC production has made no progress in at all in the seven years since 2005, as oil began its price transition. 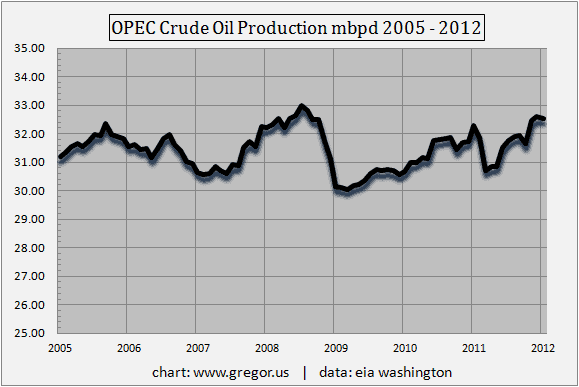 Acting to mitigate market nervousness amid Iran supply fears, OPEC on Thursday said it was pumping more oil than the market needs—at levels not seen since summer 2008—and expressed a cautiously optimistic note on demand. The cautious optimism, combined with a production boost sufficient to cover all of Iran's oil exports, is likely to further stabilize oil markets, where volatility by some measures has already smoothed in recent weeks. In its latest monthly market report, the Organization of Petroleum Exporting Countries said its crude production was 32.42 million barrels a day in March, up 317,000 barrels a day from the previous month.

Yes, but there’s a neglected point to make: these production levels are not special. Not meaningful. And are not newsworthy in any sense. Production at/above 32 million barrels a day? That level has been reached at least 4-5 times since 2005, with at best weak correlation to price changes.

Let's take a closer look at the global share of oil supply, divided in two between non-OPEC and OPEC production. 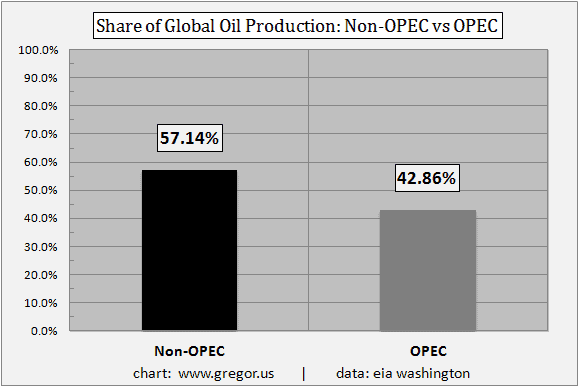 There are several possible conclusions to draw from the above chart, which shows that non-OPEC provided nearly 58% of global crude oil supply in 2011, and OPEC provided 42%.

There’s an element of truth in each of these observations.

Many also believe that both OPEC and non-OPEC could be producing a lot more oil. In the case of OPEC, many harbor the view that state-run producers and governments are sitting on massive, hidden spare capacity and retaining it as a cartel to manipulate oil prices higher. In the case of non-OPEC, many believe that environmentalists, regulations, and other limits placed by democratically-elected governments are suppressing a wall of supply that could come to market easily if only the oil is ‘set free.’

These views, however, are not only extreme but shaky. They are typical of the kind of grand claims that fit people’s worries and suspicions, rather than fitting any empirical data. The fact is that OPEC spare capacity has been under pressure for some time despite persistent belief to the contrary, with estimates running below 3 mbpd, or even below 2 mbpd. (For recent commentary on OPEC spare capacity, see A Model of Oil Prices by Chris Nelder). The case for hidden, held-back oil capacity in OPEC is weak, especially as domestic populations in the Gulf have dramatically increased the consumption of their own oil.

Meanwhile, non-OPEC large producers like Russia have significantly increased production this past decade. And regions like North America have been able to slow declines. Western oil companies — which dominate non-OPEC production — have scoured the globe looking to replace their reserves, but largely to no avail. This is why ExxonMobil and ConocoPhilips eventually gave up, capitulated, and bought natural gas assets instead. By doing so, they followed in the steps of Royal Dutch Shell, which had taken the natural gas pathway years earlier.

Therefore, a fact about non-OPEC production that was unknown even to the industry ten years ago is now very plain: There just isn’t a vast quantity of new oil that can come online easily and inexpensively outside of OPEC-controlled regions. Only Russia, the largest non-OPEC producer and now the largest single country producer in the world — eclipsing even Saudi Arabia — was able to significantly increase production.

A Window into Non-OPEC Supply: Russia

Two charts will tell us all we need to know about the limits facing non-OPEC crude oil production. First, let’s take a look at total non-OPEC production on an annual basis: 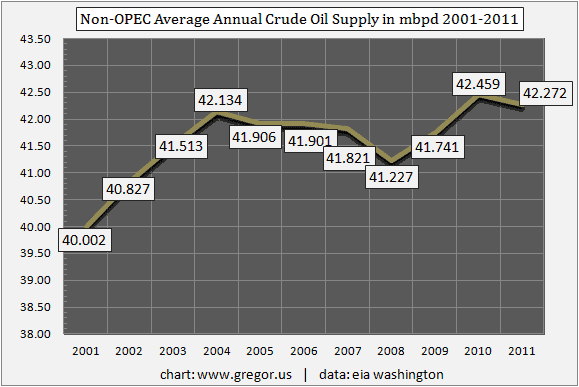 Just as with OPEC production, little if any progress has been made in the past seven years. This has been a complete surprise to most analysts, especially within the industry itself. Who would have thought that with a regime change in oil prices, non-OPEC could not sustainably increase production to much higher levels? Instead, non-OPEC production remains stuck around a ceiling, just like OPEC.

The Big Reveal comes, however, when we take a look at non-OPEC supply without Russia. 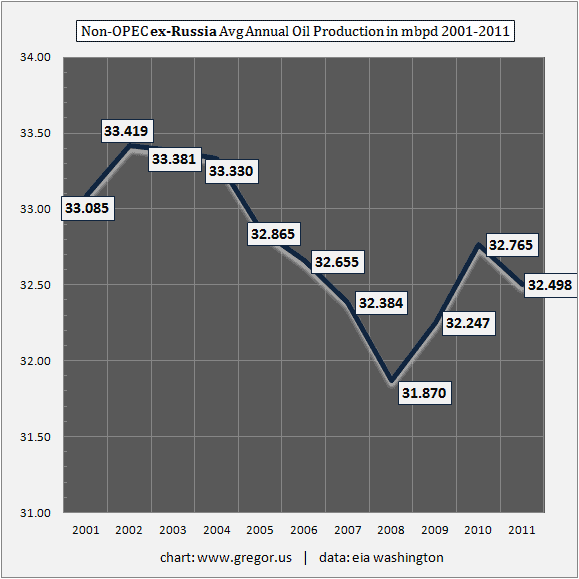 Without Russia, non-OPEC supply has actually lost about a million barrels a day of production in the last ten years. This speaks volumes to the quickly-rising costs of bringing on a new barrel of oil in non-OPEC regions, which we will discuss further in Part II of this report.

The Price of Oil When OPEC Is Powerless

Let’s imagine for a moment that OPEC could, if it chose to, pour an extra 3 mbpd of oil on the world market. And that by doing so, it could lower the price of WTIC oil to $90 or less. What would that accomplish? And for how long would such “lower” prices last?

In Part II: The Cruel Math of the Marginal Barrel, we explain that while fluctuations in economic activity can certainly raise and lower the price of oil, there are deeper structural reasons why OPEC — even with its spare capacity — can no longer sustainably “lower” the price of oil. Moreover, we will discuss how, paradoxically, any surge of supply from OPEC which did persuasively lower the price of oil could wind up having the opposite effect on price eventually thereafter.

Surprising? Yes, but not strange or unlikely, for reasons we will explain. Finally, we conclude that oil’s floor price — outside of volatile 30-90 day periods — is higher than ever before. This will make for a large surprise, should another acute phase of the financial crisis rock oil prices lower over a 2-3 month period.