Observations From The Heart Of Silicon Valley

Observations From The Heart Of Silicon Valley

Yesterday I made the 2-hour drive back to Silicon Valley, where I lived for 15 years before moving out to the country.

I rarely go back, as I miss very little about the hyper-elite scene there. When I do, though, I feel I have a useful 'insider-now-outsider' perspective that allows me to see things there more accurately than those who live in that fishbowl 24/7.

What hit me most strongly upon arriving back in the Menlo Park/Palo Alto area, is how little of the craziness has changed since I left 4 years ago. I don't mean 'unchanged' though; rather that the same craziness is there, just more extreme than ever.

The streets still bustle with hipster techies, fashionista spouses, the shiny Stanford students and the less-shiny venture capitalists. Every time I visit, I'm amazed by the latest generation of specialized stores that have sprung up to attend to every want and whim of this trend-driven population.

Here's a not-uncommon way a lunch break is spent in Palo Alto. First, zip over to Town & Country and drop $65 for a 3-minute cryotheraphy session at The Performist. Then warm up with one of your 3-times-per-week visits to Drybar for a $45 "blowout"  — no hair cut or treatment, mind you; just the styling touch-up needed to maintain your 'fabulous' look for the next 48 hours. Next, grab yourself lunch at Sushiritto (you guessed it: burrito-styled sushi) – but get there early, as you'll be waiting in a long line as this ultra-hip restaurant is only open for a few hours each day. Then for dessert, nab an ice cream sandwich at CREAM (yes, an entire store dedicated to high-end ice cream sandwiches), but be prepared for an even longer line than Sushiritto's…

The belief in the area's bulletproof and never-ending prosperity is as alive and well as I've seen it.

And housing is still the most visible example of this. Prices were insane when I lived there, and they're substantially more insane-r now: 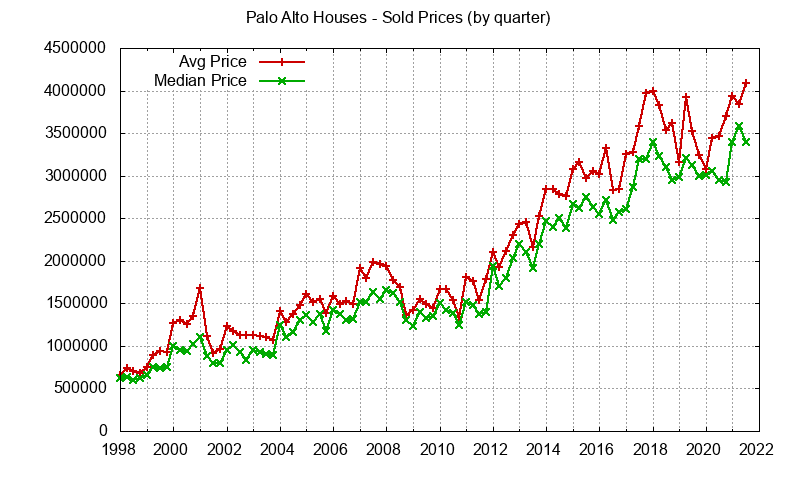 Looking at this chart, I'm reminded that I first arrived in Palo Alto in the fall of 1997 (for grad school). So the data series pretty much encompasses the span of my personal experience watching home prices shoot the moon here — and then set their sights on Mars. It's been nuts to watch. And even more nuts when noting how the pace of increase only accelerated in the years following the credit crisis — perfectly timed, I might add, with the onset of the quantitative easing programs of the Federal Reserve and the other major world central banks. Flood the world with trillions of newly-printed thin-air money and it has to go somewhere…

In 1997, I remember clearly driving down University Avenue on my way to orientation for grad school and being shocked by a 'For Sale' sign listing a home for $500,000. Who in their right mind would pay half a million dollars for a house? I recall wondering. Well, not quite 2 decades later, that same house is worth 7x (!) more according to the chart above.

Yesterday, driving through the neighborhood I used to live in, it seems every 4th or 5th house has either been substantially renovated by a recent buyer, or completely razed and replaced with a multi-$million McMansion.

My main point here is that, despite recent headlines that the Silicon Valley housing bubble may have popped, there aren't visible signs of it yet.

Trust me, I wish there were. You'll have a hard time finding somebody who has hated the housing scene there more than I have (and still do). Remember, this is the guy who ranted how this $2mil piece of garbage in my old 'hood epitomizes everything wrong with Bay Area housing:

Add that anecdote to the hard data released this week about the skyrocketing cost of renting in the Bay Area:

How Much Should You Make to Afford Rent in San Francisco?

For the squeamish, it might be best to look away. For the those with stronger reserve, another data compilation was released today by SmartAsset with arguably bad news. You will need to make $216,219 annually to rent a two-bedroom in San Francisco.

This comes on the heels of news that college grads can expect to pay upward of 79 percent of their income to rent in Baghdad by the Bay.

"While rental rates have increased in recent years, wages haven’t kept up," says SmartAsset. "The median household income in the city is only $78,378."
This is a 7.4 percent bump up from 2015, which showed that one needed $201,171 annually for a fair market two-bedroom in San Francisco.
(Source)

That is a truly staggering and stupid requirement. And while rising rents are occurring across the country (again: Thank you, Federal Reserve!), the San Francisco Bay Area remains a far outlier when compared to the other major metros across the country:

So, I'm sorry to report from the trenches that Silicon Valley's famous "reality-distortion field" is not flickering out.

At least, not yet.

Signs Of A Top

Now, while there aren't yet signs of a correction there, there are plenty of symptoms indicative of a top.

Housing and tech company performance are the ubiquitous topics of conversation in Silicon Valley. That's nothing new. But the tone in which those conversations are being had is.

Homeowners are not oblivious to the dizzying heights house prices have now reached. While they remain smug about the equity gains they're sitting on, they privately admit that the rocket ride can't last forever. Most now predict a period of 'cooling off' will need to happen at some point, though very few have the stomach to consider that prices might actually correct lower. The point is, the ingrained belief that "housing prices always go higher" — which, trust me, is a universal religion out here — is beginning to moderate. Which is sort of akin to the Pope wondering aloud "Maybe those atheists are on to something…"

Of similar momentousness, the all-encompassing faith in the Tech sector to churn out ever more millionaires and billionaires is similarly experiencing a challenge of confidence. It's getting harder for start ups to access investor capital:

According to a recently released report from PricewaterhouseCoopers and the National Venture Capital Association, funding in Silicon Valley startups fell 19.5% in the first quarter of 2016 compared to a year earlier, and is down 10% for seed stage companies in the first quarter 2016, amidst fears over the global economy and the run-up in startups’ valuations.
(Source)

For more established companies, they're having trouble cashing out. The IPO window for Tech stocks is abysmal this year:

Why 2016 has been a terrible year for tech IPOs

Only 11 U.S. companies have gone public in 2016, making it the worst start to a year for initial public offerings since 2009, when only four companies made it out of the gate by April 20.

At this time last year, 43 companies had gone public, according to Renaissance Capital, which runs IPO-focused exchange traded funds.

And the largest perennial powerhouses — companies like Apple, Netflix, Yahoo!, Google, LinkedIn, Twitter — have seen their stock prices flatline or (gasp!) drop over the past year (Facebook is the only notable exception). In fact, many are announcing mass layoffs, both public and stealthy, as I've been chronicling closely since the start of the year.

The world is slowly beginning to wake up to the fact that the Tech industry's track record of birthing world-changing enhancements looks better in past decades than in this one. As I've railed about loudly, Silicon Valley has become a too-cozy partner with Wall Street — a partnership that has resulted in a lot more huckersterism than actual value.

Life in Silicon Valley has evolved around a dependence on the next wave of boom-time money flooding in from the NEXT BIG THING. But right now, the current "big thing" is losing momentum, and there's no obvious fleeter-footed successor poised to take the baton anytime soon.

What happens when a system designed to sell to the "greater fool" runs out of fools?

Theranos: Portent Of A Coming Fall From Grace?

This morning, Tech darling and soon-to-be-slain unicorn Theranos announced that it was voiding all test results performed on its proprietary Edison machines over the past 2 years, effectively admitting there is no real value underlying its business. As a result, its private market valuation of $9 billion is now on an express-ride to somewhere much closer to $0.

Here again, I have a personal connection to the story from my time in Palo Alto. Theranos CEO Elizabeth Holmes went to Stanford: I'm socially familiar with a close advisor of hers, and a grad school classmate is one of the VC investors in the company. To be clear: I haven't talked with these folks much directly about their involvement with Theranos, but I have an understanding of some of the players involved.

To my eye, the fall of Theranos is a quintessentially Silicon Valley story. A big, brash idea that feeds into the valley's self-adulation as a place where miracles happen. Silicon Valley wants Cinderella-stories like this to succeed. In fact, to support the real estate and Tech funding industries there — it needs them to. Without the influx of new capital and new dream-chasing professionals, the party ends pretty quick — as nobody can afford to live or operate there for very long without a windfall.

Because of this strategy of hope, those involved with Theranos deluded themselves. They clearly didn't conduct their due diligence with sufficient rigor and — based on the folks I know personally (who possess much more brainpower than I, I'll readily admit) — didn't seem willing to admit to themselves how bad things might actually be, even as the evidence mounted month after month. There's nothing terribly unique in this; as Dan Ariely reminds us, we humans are champion rationalizers. Our monkey-brain often derails us with its preference for the soothing lie over the inconvenient truth.

And now, Theranos' dream is dead. Even if there's worthwhile intellectual property to be salvaged, the company's brand (as well as its founder) is now toxic.

I see a lot of similarity in the demise of Theranos and the likely future trajectory for Silicon Valley at large. Loose money enabled valuations to balloon way out of proportion with fundamentals, massive self-delusion fanned by media adulation have kept the system from challenging itself, and yet the farce continued far longer than anyone imagined possible.

Theranos' day of reckoning has just arrived. By itself, it's a single added blemish to the Silicon Valley 'miracle'. But how few more can be sustained before the 'miracle' starts to look more like a 'debacle'?

Answer: fewer and fewer the higher home prices and rents rise, and the prospects of being on the receiving end of a Tech windfall diminish. At some level, there's just no more greater fools left willing to contribute their money or their time given the high cost and cooling upside.

And then like Theranos, Silicon Valley's impenetrable reality distortion field will fizzle, and possibly flicker out. When that happens, like Theranos, the downdraft will be sudden, shocking, and brutal.