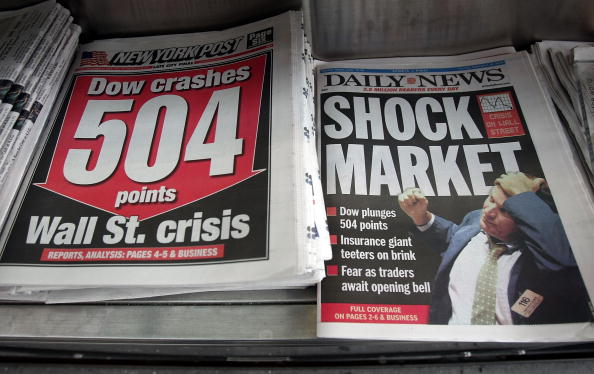 Even people who don't follow the stock market closely are aware that the global economy is weakening and appears to be heading into recession.

For those who track the stock market, the signs are ominous: the U.S. was the last major market to notch gains this year and in October the U.S. market followed the rest of the global markets into an extended slide which has yet to end.

Just as sobering, key sectors such as oil, banking and utilities have crashed with alarming ferocity, reaching oversold levels last seen in 2008 as the global financial system was melting down.

These sectors crashing sends an unmistakable signal: the global economy is heading into a potentially severe recession and assets will not be rising in value in a recessionary environment. So better to sell risk-assets like stocks now rather than later, and rotate the money into safe assets such as Treasury bonds.

And indeed, households now own more Treasuries than the Federal Reserve–a remarkable shift in risk appetite.

Many other indicators of recession are in the news: auto and home sales and global trade are all slumping.

Are we in a repeat of the global financial meltdown and recession of 2008-09? The sharp drop in equities is certainly reminiscent of 2008. Indeed, the December decline is the worst in a decade. Or are we entering a different kind of recession, the equivalent of uncharted waters?

And if we are entering a recession, what can central banks and governments do to ease the financial pain and damage? We can’t be sure of much, but we can be relatively confident central banks and states will respond to the cries to “do something.”  This poses two questions: what actions can central banks/states take, and will those policies work or will they backfire and make the recession worse?

A good place to start is to revisit the 2008 crisis and attempt to understand its sources and how central bank policies reversed what appeared to be a snowballing collapse of global finance– a meltdown that would have sent the global economy into a deep freeze.

Adam Tooze's recent book Crashed: How a Decade of Financial Crises Changed the World is a forensic autopsy of the crisis, and though I have yet to read the book, I refer to Tooze's recent article in Foreign Affairs magazine for his take on the basic mechanics of the 2008 crash and central banks' responses.

As capital flows and short-term lending dried up, a liquidity crisis took hold: non-U.S. banks couldn't get their hands on enough dollars to meet their obligations.

Unable to borrow dollars, their only choice was to dump their U.S. assets, panic-selling that would have crushed the valuations of U.S. stocks, real estate and mortgage-backed securities.

To stave off this banking crisis and a collapse in U.S. equities and real estate markets, the Federal Reserve quietly provided trillions of dollars of short-term credit to European banks, and opened currency swap lines with other central banks to supply however many dollars those banks needed to restore liquidity to their banking sectors.

To put some numbers on these dynamics: according to Tooze, global capital flows dried up 90% from 2007 to 2008, and global exports plummeted 22% within 9 months.

The long-term result of this global dollar shortage and emergency Fed policies of providing trillions of dollars in short-term USD credit and USD currency swap lines is that the dollar is more dominant now than it was before the crisis.

The USD is now the anchor commercial currency for countries representing 70% of global GDP, up from 60% in 2000. As Tooze explains, “The world's central banks effectively became offshore divisions of the Fed, conduits for whatever dollar liquidity the financial system required.”

This interplay of over-reach, credit, currencies and policy responses is complicated, so let's try to summarize what happened in 2008:

Liquidity crises are thus relatively straightforward: providing emergency lines of credit solves the initial crisis.  Insolvent creditors can then be liquidated and losses written down in an orderly fashion.

But not all downturns are liquidity related. A conventional business-cycle recession occurs when too much credit has been extended to marginally creditworthy borrowers to fund investments in overvalued assets.

As lending to marginal borrowers / buyers is reduced, assets decline and these two conditions–tightening credit and declining asset valuations–trigger defaults which drive further tightening of credit and a self-reinforcing sell-off of assets.

Simply providing more short-term credit won't solve this credit/business cycle downturn, though it might help safeguard creditworthy borrowers from being forced into insolvency or fire-sales of assets.

If lenders in the banking and shadow-banking sectors are overleveraged and have extended loans on overvalued assets to marginal borrowers, the only real solution is to deleverage by writing down bad debts and taking losses on assets which have declined in value.

There’s a third kind of recession: the popping of credit-asset bubbles such as the dot-com stock bubble in 2000-02 and the housing bubble in 2007-08. The Fed and other central banks didn’t stop at providing liquidity; they bought assets (mortgage backed securities and Treasury bonds) to put a floor under asset markets and support a reflation of risk assets such as stocks and housing.

Articles like this “In A World Of Warnings, “This Is The Biggest Yet” indicate there is great uncertainty in the global financial system.  This is reflected in the skittish volatility of stock markets as every rally is soon sold and the distress that’s visible in credit markets.

This suggests market participants are no longer confident about central banks’ diagnosis of the global economy’s malaise and the efficacy of their response.  If central banks and states misdiagnose the current downturn, their policy responses could make the situation worse. It’s also possible that policies that worked in the past will fail to deliver the desired results this time around.

The 2008 crisis resulted from hyper-coherent, overleveraged banks and overvalued markets exacerbated by a liquidity shortfall in USD-denominated credit. Have these conditions melted away or are they still present? It can be argued that banks have lowered their leverage, but the tight connections in global finance remain in place.  By many measures, valuations in risk-on assets such as equities and real estate are as extended as they were in 2007-08.  As for dollar shortages, many believe this is still an issue.

If the current recession is the result of credit exhaustion, i.e. companies and households cannot afford to borrow more or don't want to borrow more, increasing liquidity won't be effective.

If the current downturn isn't a liquidity issue, it’s not clear what the central banks can do to maintain elevated valuations in stocks and real estate, other than buying these assets directly and in quantities large enough to offset the sort of mass liquidation we’re now seeing. Direct purchases of assets such as bonds and stocks by the major central banks have supported asset valuations for the past decade, and now that the Federal Reserve has increased interest rates and begun reducing its balance sheet, the Fed’s implicit support of high asset valuations has come to an end.

The problem with bailing out markets with direct asset purchases is, as Tooze notes at the end of his article, central banks no longer have a political carte blanche to “do whatever it takes.” He also noted that China was not participating in the currency swap lines in 2008, and so a credit crisis in China might be more difficult to contain than the European-U.S. credit/liquidity crisis of 2008. By 2015—three long year ago—Chinese businesses had already borrowed $1.7 trillion in foreign currencies, the majority being U.S. dollars. Assuming the trend continued to the present, we can estimate the sum now exceeds $2 trillion—not a trivial amount even in a large economy like China’s.

It seems the current market downturn (and looming recession) is not a repeat of either the dot-com recession (the result of the collapse of an asset bubble that was concentrated in one sector, technology) or the 2008 global financial meltdown and recession. The current downturn arguably shares traits with three different kinds of recession: the popping of asset bubbles (like the dot-com and housing bubbles bursting), credit-currency mismatches and a panic move to de-risk (like the 2008 meltdown) and a classic business-cycle recession of credit and demand exhaustion. This will complicate the analysis and response of central banks, companies, investors and households.

In Part 2: The 8 Systemic Failure Points Of The Global Economy, we analyze the biggest risks confronting policymakers and investors alike, as both struggle to avoid the worst of the danger to come.

And we explain why, despite its many very real weaknesses, the US economy and its markets may be positioned to fare better than the rest of the world as the reckoning unfolds.