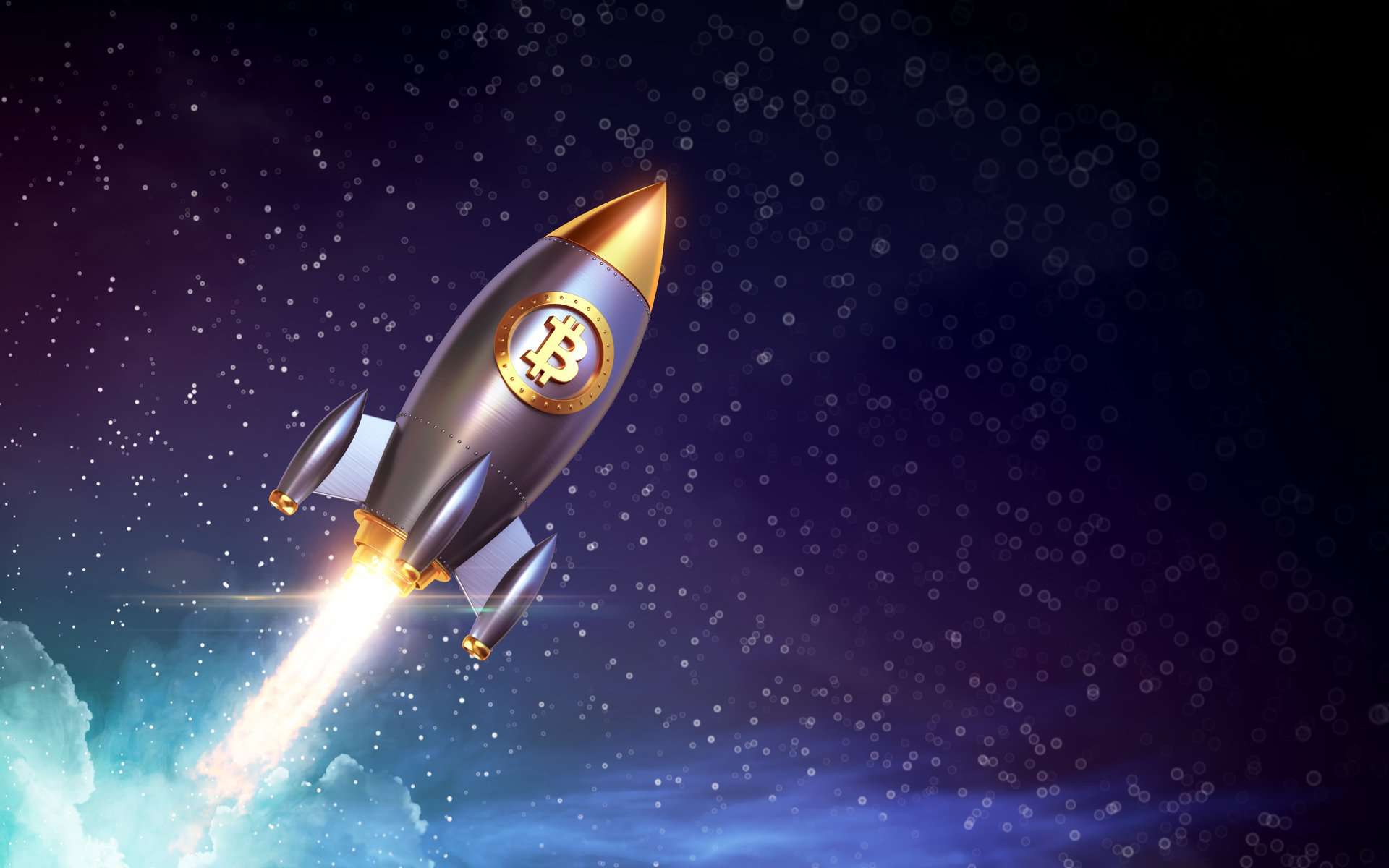 If You Don’t Own Any Bitcoin, Read This

If You Don’t Own Any Bitcoin, Read This

And that's after a mind-blowing upwards rocket ride over the past several months.

I think it's safe to say that the vicious melt-up in price over such a short timeframe has surpassed the expectations of even the starriest-eyed Bitcoin fanboys.

The whole world, especially the 99.99% of us that own zero cryptocurrency, is asking: What happens next? And, What should I do?

Is this insane trajectory going to continue for a lot longer? Do I need to get in now to avoid missing this once-in-lifetime fortune-making opportunity?

Or is this a classic bubble blow-off top? Is this the deadliest time to enter, right before the price implodes?

I had the chance to ask these questions Wednesday to a long-time veteran in the digital currency space. We met at a gathering of online media 'mavens'; this guy has published news and analysis on cryptocurrencies since 2011, for both investors and developers. He knows the space exceedingly well.

Unsurprisingly, he holds a lot of Bitcoin. I didn't ask directly how much; but knowing that he was covering the space back when Bitcoin traded in the single-dollars range, my conservative mental math quickly concluded he's probably worth more than most people I've met in my life.

So here what I learned during my chat with him:

His overall takeaway? Don't buy at today's prices; wait for a correction (it could be a really big one). But once it happens, buy in and hold, as he sees the price going much, much higher over the next decade.

By the way, I'd share this guy's name with you but he asked me not to. Given how stratospheric Bitcoin has risen over the past year, he says his biggest priority right now is to fly under the radar and have as few people as possible be aware of his crypto holdings. Apparently this has recently become a real concern for Bitcoin investors who have suddenly become overnight multi-millionaires (Or hundred-millionaires. Or in the case of the Winklevoss twins, even billionaires). A vast windfall like this makes you an alluring target to criminals.

Just one more unexpected consequence of this crypto mania we're watching play out in real time.

The above expert's views match well with those of our team's outlook here at PeakProsperity.com.

Charles Hugh Smith, who has been writing about Bitcoin for us since it traded below $600 has long had a price target of $17,000 — which seemed unattainably high even just one short week ago. That underscores how insane the price moves of the past few days have been.

With the $17,000 milestone hit so quickly, does he think a large correction could ensue? Very possibly. (I should make clear though, he remains quite bullish about Bitcoin's long-term future potential).

Davefairtex, our resident charting expert, notes that his model now shows Bitcoin's level of overvaluation at "nosebleed" levels with a daily RSI of over 98 and the forecaster clearly predicting a reversal:

And reader mrees999, our community's most-respected educator on the cryptocurrency space — and one of the biggest advocates earlier in the year for buying Bitcoin — offered the following words of caution yesterday:

I probably wouldn't get in now. It's gotten irrational with FOMO. I'm selling into this rally and waiting for a massive correction once the bit shorts come in with the futures trading about to begin.

(Again, I should point out that mrees999 remains robustly optimistic about Bitcoin's longer-term future price potential.)

To the above, I'll simply add two additional pieces of data to show how quickly Bitcoin has outstripped any sort of rational justification for its recent price explosion.

The first is this chart below, which shows how Bitcoin's price has blown above the maximum Fibonacci extension between its previous swing low and yesterday's swing high (note: this chart was created before the price continued higher to $19,000):

And lastly, here's a table showing the accelerating compression of time it has been taking for Bitcoin to hit each new $1,000 price milestone: 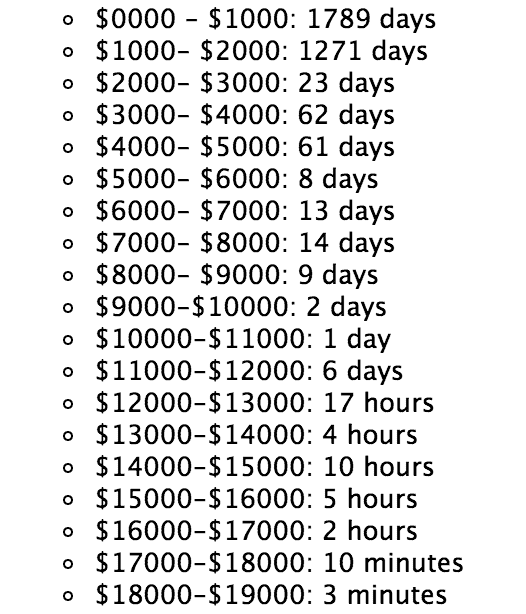 That right there, folks, is the madness of crowds. It's a FOMO-driven mania to make the South Sea Bubble blush.

Advice For Those Who Missed The Rocket Ride

So, if you've been feeling like the loser who missed the Bitcoin party bus, you've likely done yourself a favor by not buying in over the past few weeks. It is highly, highly likely for the reasons mentioned above that a painful downwards price correction is imminent. One that will end in tears for all the recent FOMO-driven panic buyers.

To that point: as I'm finishing up this article, Bitcoin has retraced back to $15,100. That's a 21% loss in less than 24 hours for those who bought at yesterday's $19,000 high. If yesterday indeed proves to have been the blow-off top, that loss could get a lot uglier quickly.

But even if it doesn't, what can those of us who don't currently hold any cryptocurrency do as we wait for the dust to settle here?

While we've made the case that Bitcoin's current run-up has been "too far, too fast" and a painful correction is highly likely, the new cryptocurrency era is a bona fide revolution. The underlying technology of the blockchain will transform industry and commerce on a similar scale as the Internet has.

While we urge prudence and caution regarding the conditions under which you invest in the cryptos, we don't recommend you ignore their significance.

Charles Hugh Smith has written several reports for us designed to demystify the digital currency space and help you understand the future value that the blockchain promises to unlock for society.

If you feel you don't yet have a good grasp on all this, make his report Understanding The Cryptocurrency Boom your mandatory reading over the next few days.

Written just a few short months ago, when Bitcoin was a mere $2,600(!), this publication and its excellent companion report, The Value Drivers Of Cryptocurrency, explain in layman's terms the real utility value of digital currencies and why a long-term view can justify prices that may ultimately be much higher than where they are today.

Don't let ignorance or a sour-grapes frustration from missing out on the first big run make you blind to the revolution underway. Whether you participate in it or not, and at what price, is up to you. Just make sure your decisions are well-informed ones.

Click here to read Understanding The Cryptocurrency Boom (free to all readers).