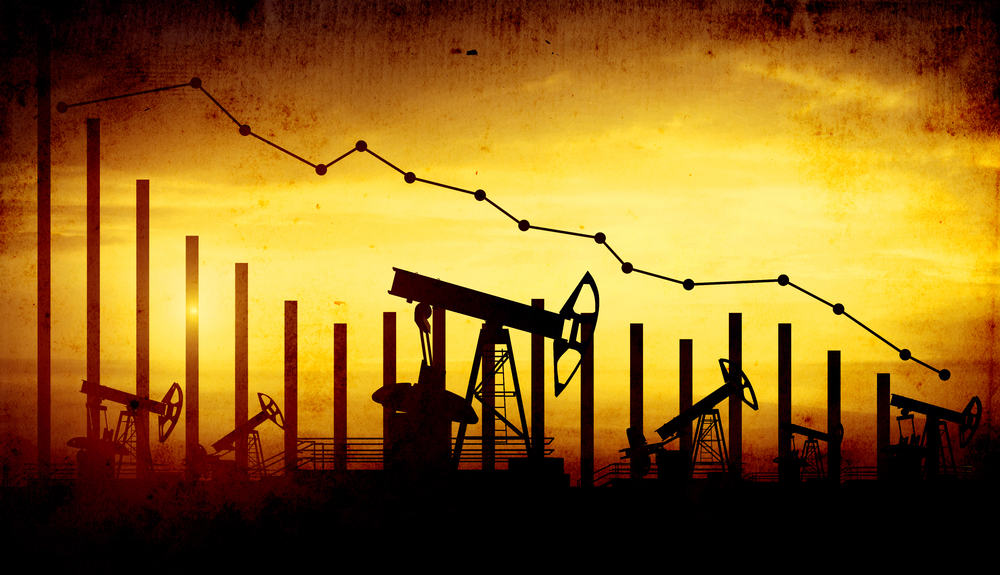 The buck had a huge rally – up +1.96% on the week, with half of the move happening on Friday. My guess: the banksters saw this print coming. They probably had models that sniffed it out. And/or they got hints from within the system. This is why we like to watch prices. The well-connected banksters have the story days before we do, but the secret tends to leak out via price moves in the hard-to-control market segments. 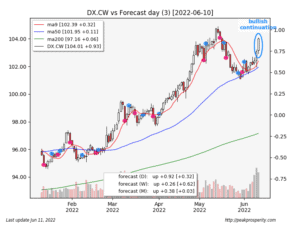 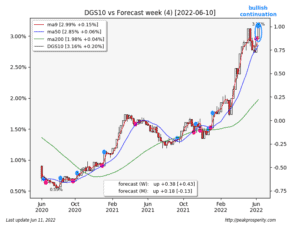 Money also fled crappy debt, which did terribly – JNK fell all week long. If there was any clue as to how this CPI read was going to play out for risk assets, crappy debt provided the “coal mine canary” answer. The weekly drop for JNK was -3.94%, a massive plunge. Someone got the news in advance here too, it seems. 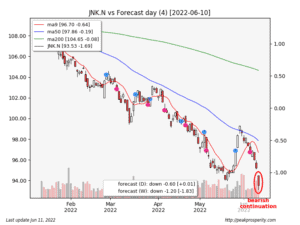 Money also fled equities, with SPX falling -5.32%. The gap-down open on Friday, along with the close-at-the-lows was definitely not a positive sign for equities. (Black marubozu candles – Friday’s SPX print – don’t mark lows very often.) The sector map was bearish: financials (-7.19%), tech (-6.79%), and REITs (-6.49%) led lower. Model shows a downtrend in all timeframes. 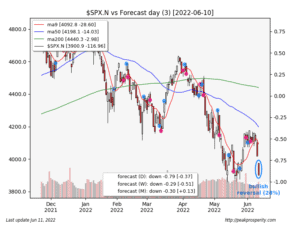 Given the plunge in risk assets – which seem to be projecting a lot more rate increases ahead by the Fed – gold did extremely well. Gold was enthusiastically pounded by “someone” – twice – after release on Friday, only to recover strongly, and end the day up +25; it was a $50+ trading range. Silver had a similar experience, although its snap-back rally wasn’t nearly as strong.

While gold/USD rose by +1.28% [+23.78] for the week, with all the gains coming on Friday, gold/Euros did even better, jumping up +3.24% [+56.13] on the week. Gold/Euros looks extremely strong, which is quite unusual; gold usually does very poorly when the buck rallies. But not this time.

Even after the strong Friday rally, Gold OI closed the week at a 10-month low. This suggests that the banksters do NOT want to be short gold. 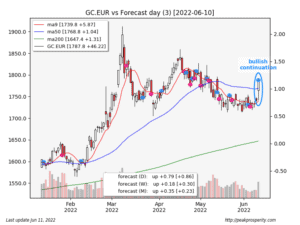 Crude was largely unchanged [-0.25% on the week], while copper fell hard, losing -4.25%. “Doctor Copper” (which market legend tells us it can forecast the “health” of risk assets) does appear to be in a downtrend, although it is looking stronger than equities and the 10-year for sure. Most of the plunge in copper occurred Thursday and Friday. This lines up with equities and crappy debt. 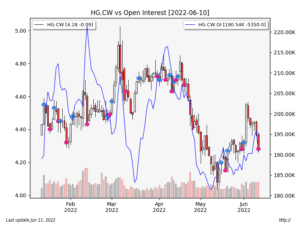 Lastly – the rape and pillage of the taxpayer-funded Strategic Petroleum Reserve continues – it even increased this week, to 7.2 million barrels. President Grandpa’s WEF-trained handlers are steadily and deliberately stripping the U.S. of its strategic petroleum reserve, which is actually good, since once the we run out, America won’t be a superpower any longer (good luck running the Army and Air Force on “green energy” – we don’t have Tesla-constructed M1A1 tanks), and better yet, the remaining lower-and-middle-class Plebes will be forced to buy Tesla cars – even though there aren’t enough raw materials to make enough of them to make a dent. (Tesla worldwide production: 100,000 per month – 1.2 million per year. Contrast with the U.S. auto fleet: back in 2015, it numbered 263 million. That yields a 219 year timeframe to replace the current American auto fleet.) 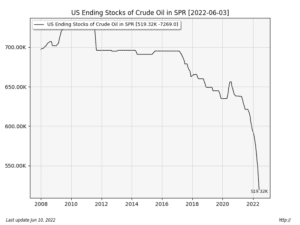 The recklessness of this policy either speaks to the inadequacy/technical illiteracy of the WEF Young Global Leader programs, or it’s a deliberate “destroy the U.S.” policy put in place by that same WEF. It’s hard to tell which one from a distance. Heck, maybe they select and train the YGL’s to be stupid, and simply instruct them on what stupid policy to enact. Paid for by You and Me.

Each week, the draw against the irreplaceable SPR continues to increase; it was 1.3% this week alone.  “Climate Change.”  Or something. 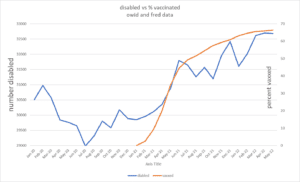 All of this stuff is just a bunch of shoes waiting to drop. What will be the catalyst? Say an important CDC/NIH/FDA whistleblower who wants to get ahead of the prosecutions-to-come? Someone sure will. Those six FBI whistleblowers are examples of this very outcome.

The more I watch the WEF-trained gang in charge, and/or the corrupt Pharma servants at CDC/FDA/NIH, the more I think they’re just not that bright. “Don’t they realize this ends badly?” But like Ed counsels us, we have to “think like a criminal” whose only response to an increasingly desperate situation involves doubling down. And besides, their tricks have all worked (mostly) great up until now. I am reminded of Hitler, hiding in his bunker as the Russians slowly approached Berlin in 1945, who somehow managed to convince himself that Germany’s “secret weapons” would still win the war. And, he brought everyone around him along by sheer force of will, right until he killed himself.  “Vaccines! Boosters! New variants!”

After Hitler’s suicide, Germany sued for peace, but had to accept Unconditional Surrender. And then came Nuremberg.